Summers with major international competitions always feel a little different. At the time of writing, we are less than a week removed from the final of the 2020 (really 2021) European Championships. During the tournament, the focus was firmly on the matches, players and narratives that surrounded the competition as Italy emerged victorious over a youthful and exciting England team.

While the tournament was in full flow the narrative around transfer activity died to a low murmur. Virtual column inches were filled with match reports and analysis as the usual conjecture around transfer deals took a back seat. Manchester United almost had a deal agreed for Jadon Sancho but will wait until after the winger had finished on England duty to finalise. Arsenal almost had a deal with Brighton for Ben White but again were waiting for the conclusion of the tournament. Indeed, now, we are seeing the normal focus of pre-season set in as football fans grow increasingly more impatient to see their sides sign the next big thing and find that player who they believe will make the difference between success and failure in the 2021/22 season.

This sense of impatience is perhaps most tangible at Tottenham Hotspur as the London club try to rejuvenate a squad that stuttered over the line last season. Their coach Jose Mourinho was a casualty of their poor form and even poorer performances but the hierarchy at the club are squarely responsible for the poorly managed efforts to find a new coach. Finally, however, they have their man and the former Wolves coach Nuno Espirito Santo being appointed. With that appointment the club are now able to turn their attentions towards strengthening the existing playing squad, well, that and keeping hold of their talismanic forward Harry Kane amidst significant interest.

One name that has been heavily linked to Spurs is the Japanese defender Takehiro Tomiyasu of Bologna. The purpose of this article is to examine the skill set and explain why Tomiyasu could well become one of the signings of the summer should he make the move.

You can see from his profile above that his heatmap is extremely interesting. The yellow to red areas are where he completed most of his actions across the course of the 2020/21 season. His versatility is noteworthy but as is his ability and willingness to be involved in the game within the opposition half of the field.

I first became aware of Tomiyasu when he was playing in the Belgian top-flight for Sint-Truiden. There, his progressive passing as part of a back three was his stand out strength as he developed an ability to access the final third via line-breaking passes with consummate ease. From there, the Japanese defender moved to Serie A with Bologna and after two full seasons at the Italian club, he appears set to move again.

I feel as though Spurs would be an extremely interesting fit for Tomiyasu. While we cannot be sure at the moment it feels likely that their new coach will favour a 3-at-the-back system next season with Matt Docherty likely to fill the same role at Spurs as he did under the Portuguese coach at Wolves as the right wing-back. Tomiyasu feels ready-made to play as the right-sided centre back in that system.

I have already written about Tomiyasu for Total Football Analysis and for the Scouted Football Handbook but the time is right to refresh my opinion on one of the most flexible and technically sound defenders in the top 5 leagues at the moment.

As befits a player who is comfortable playing as a fullback or as a central defender one of the strengths of Tomiyasu’s game is his ability and willingness to drive forward in possession of the ball. As he plays as a central defender almost exclusively as part of a back three his side often have numerical superiority in their build-up phase. This means that as Tomiyasu receives the ball in these areas he often has space and time in which to receive and play. While he is more than capable of playing the progressive pass that breaks the line and accesses the middle third of the field, he can also carry the ball forward confidently himself. Having central defenders who are confident in possession of the ball as they move forward is an extremely effective method of ball progression. While they gain ground towards the opposition goal when moving in this manner they also force opposition players to move out from the midfield block to engage the ball. This then creates an opportunity for the ball to be played into pockets of space in the opposition defensive structure. 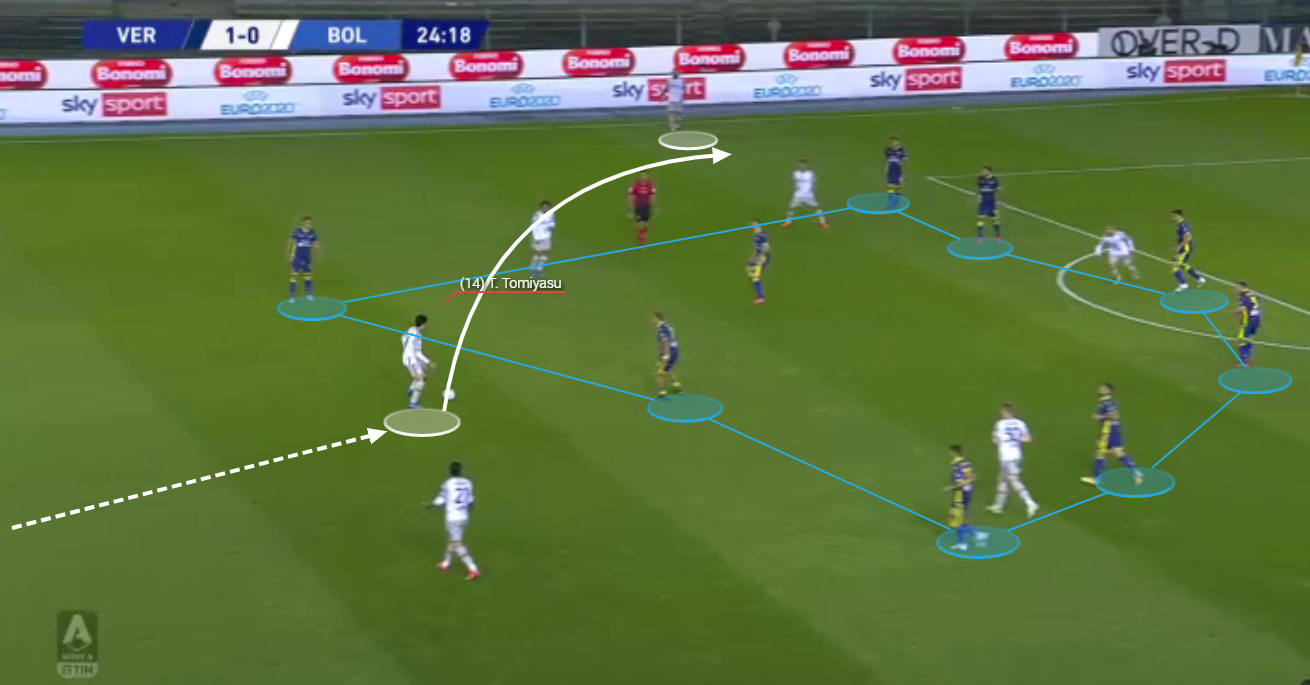 We see an example here of Tomiyasu’s willingness to carry the ball forward in the match between Hellas Verona and Bologna. As the Japanese international moves out in possession of the ball, he encounters a compact block of nine opposition players. He steps into the edge of the final third before finding the space and the free man with a diagonal pass that accesses the far side of the pitch. The Verona defensive unit is too compact to play through centrally and so instead the Japanese defender looks to access the free space and play around the outside. 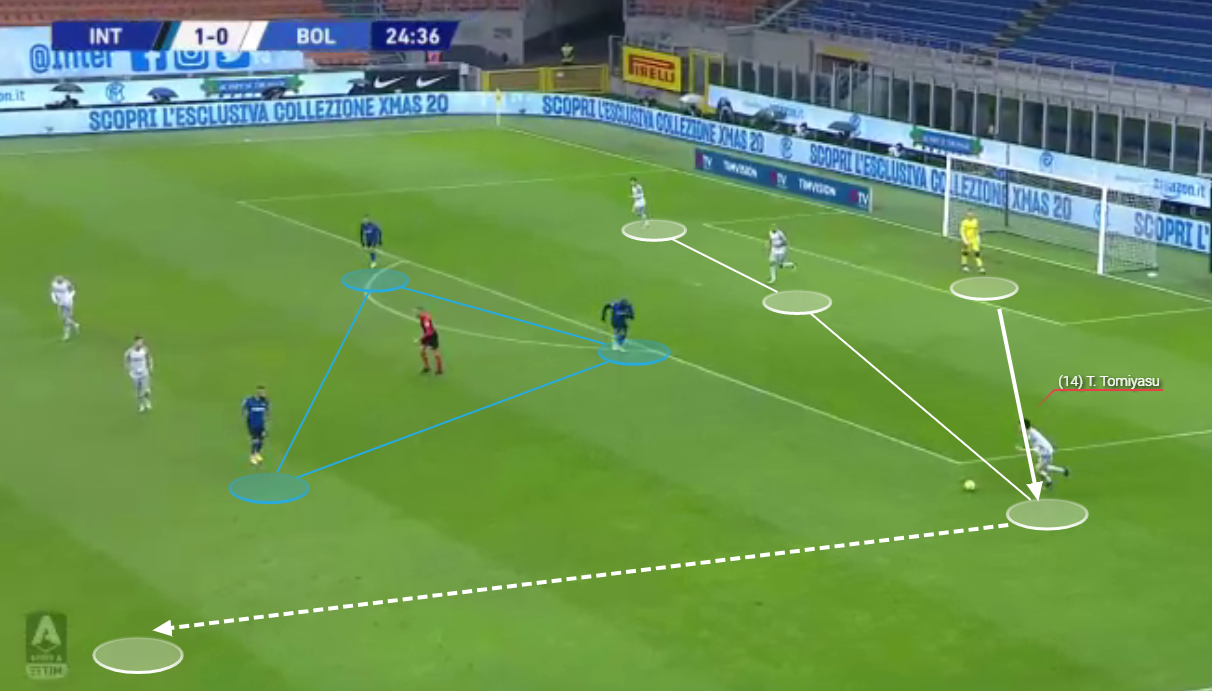 This time we see an example from the match that Bologna played away to Internazionale. As Bologna are looking to construct their attack from the first line we can see that they have a numerical advantage of 4v2 (we include the goalkeeper) against the two most advanced opponents. As Tomiyasu receives the ball from the goalkeeper he is able to open out his body to receive before driving outside the opposition 2-1 pressing structure. This outplays three direct opponents and allows Bologna to comfortably move the ball into the middle third.

While Takehiro Tomiyasu is a very good ball carrier who can win ground for his team at ease he is also a capable and confident passer of the ball. Though his progressive passing numbers have dropped off while playing in Italy he is still proficient when moving the ball into the final third or just forward in a zone towards the opposition goal. Indeed, across the 2020/21 season, we saw Tomiyasu average 8.39 progressive passes per 90 and 6.88 passes to the final third per 90.

For Spurs, a defender who is comfortable in possession in this manner would be a huge help in their build-up phase as a compliment to the Danish midfielder Pierre-Emil Hojberg. 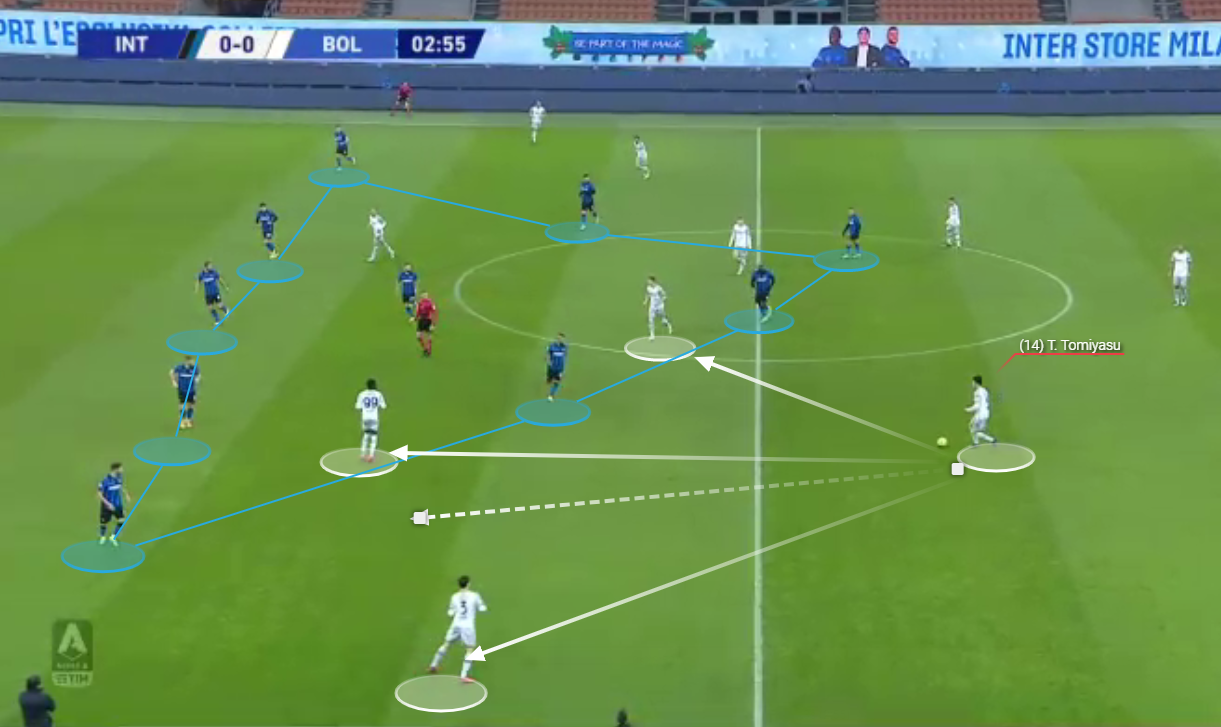 Here, we see an example of how Tomiyasu can be so effective for his side. He has possession of the ball playing as the left-sided central defender, again in the match against Internazionale, with little immediate pressure being put on the ball.

He has the ability to play line-breaking passes that access the central player or the player directly ahead of the ball. He is also though intelligent enough to realise that sometimes the line breaking passes are not the correct option and to bounce the ball outside with a first or second-line pass to open up the pitch.

He can also, of course, drive forward himself in these situations in order to commit an opposition defender and pull them out towards the ball. 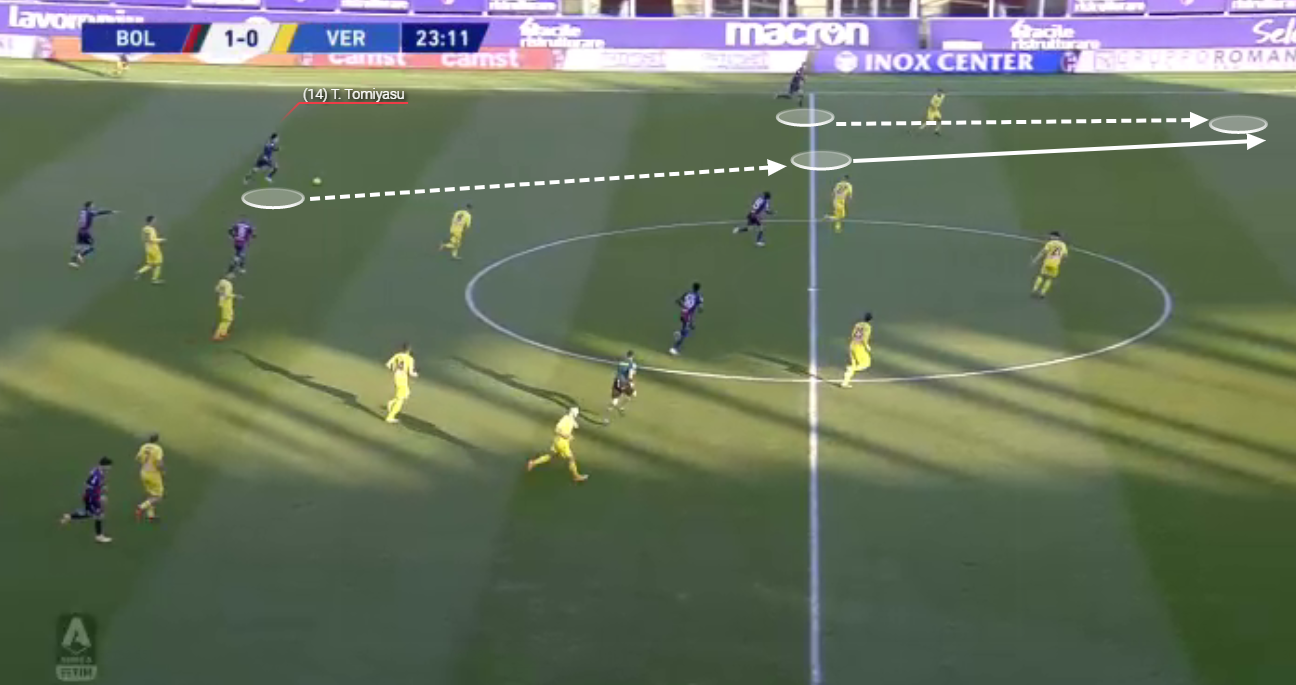 Here we again see that Tomiyasu is comfortable when driving the ball out from the defensive line. What is notable, however, is that when he recognises that there is a teammate in a better position he is capable of releasing the ball with the correct weight and angle to find that player and move them into a promising position.

Tomiyasu is a defender who relies on his pace and his athletic ability to defend as opposed to his strength or frame. He is intelligent and displays very good levels of anticipation and concentration when defending. He rarely switches off or makes an obvious positional error and he has the ability to quickly move his hips in order to switch defensive stances in order to cover all areas of the pitch in the defensive third.

As you would expect given his positional versatility Tomiyasu is capable of defending when pulled out and isolated wide or when the ball is played over the top and he has to recover space and defend towards his own goal. 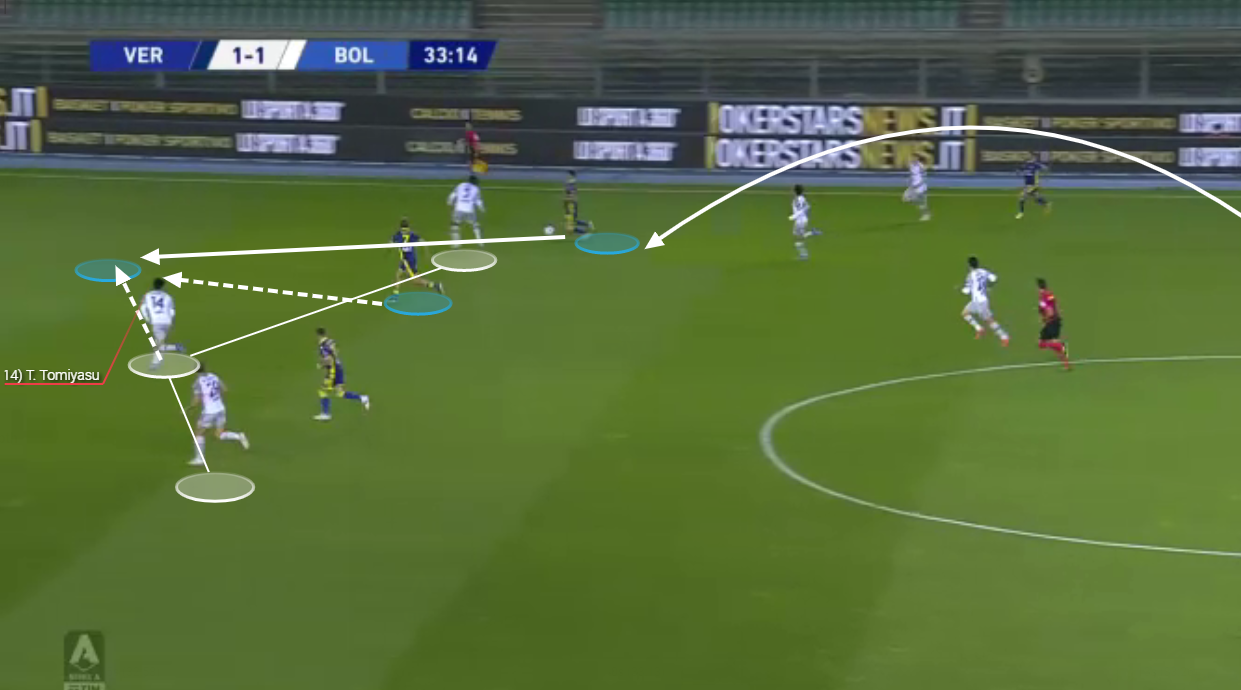 We see an example here of Tomiyasu defending in space as the free man. As the opposition look to attack quickly in a moment of transition they play two passes, one long and one short, and access space behind the Bologna defence. The final run comes from a deeper position as the Verona player looks to exploit the space between Tomiyasu and the other defender.

The Japanese defender, however, reads the threat and moves quickly to not only cover the run but win the ball back cleanly. 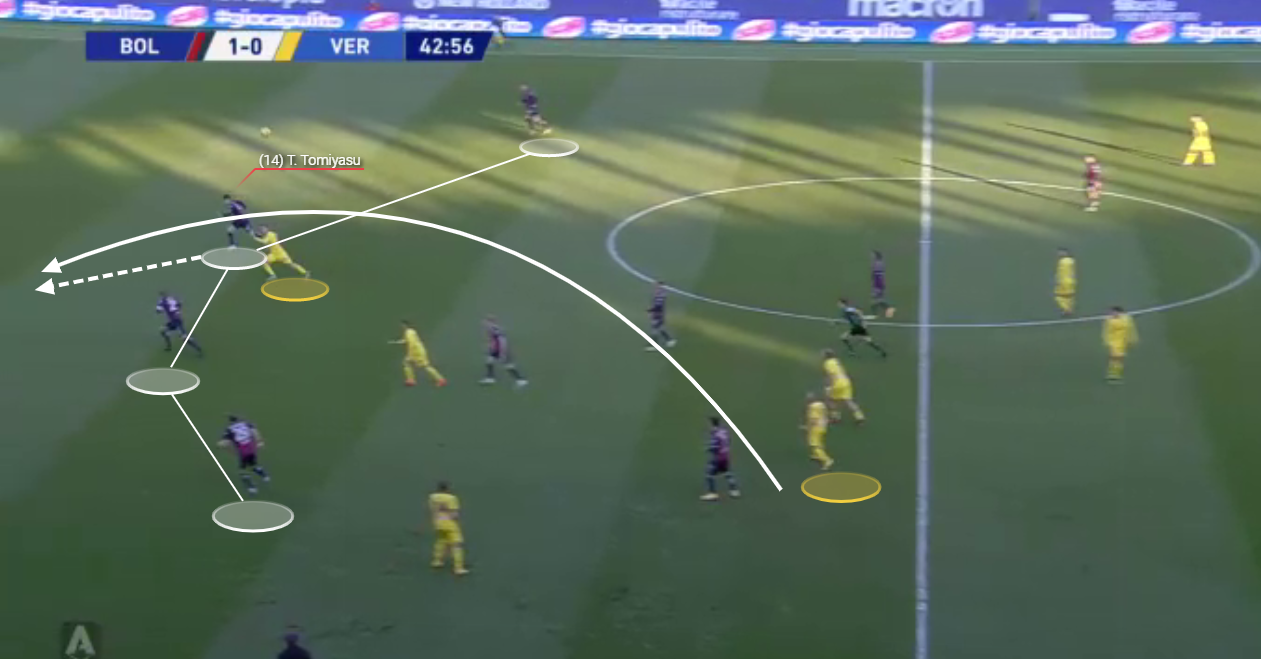 Here we see the opposition looking to attack with a single direct pass that accesses the space behind the Bologna defensive line as they look to release the attacking player. Once again it is Tomiyasu who reacts to the threat first and moves across to prevent the opposition from developing the attack into a goalscoring opportunity.

Defending in a block

When defending the space in front of the defensive line and as a part of a compact block Tomiyasu typically impresses. He is more comfortable as the free defender than he is defending with a striker pressed up against him but his ability to anticipate opposition movements and read the game means that he is quick to plug any potential gaps. 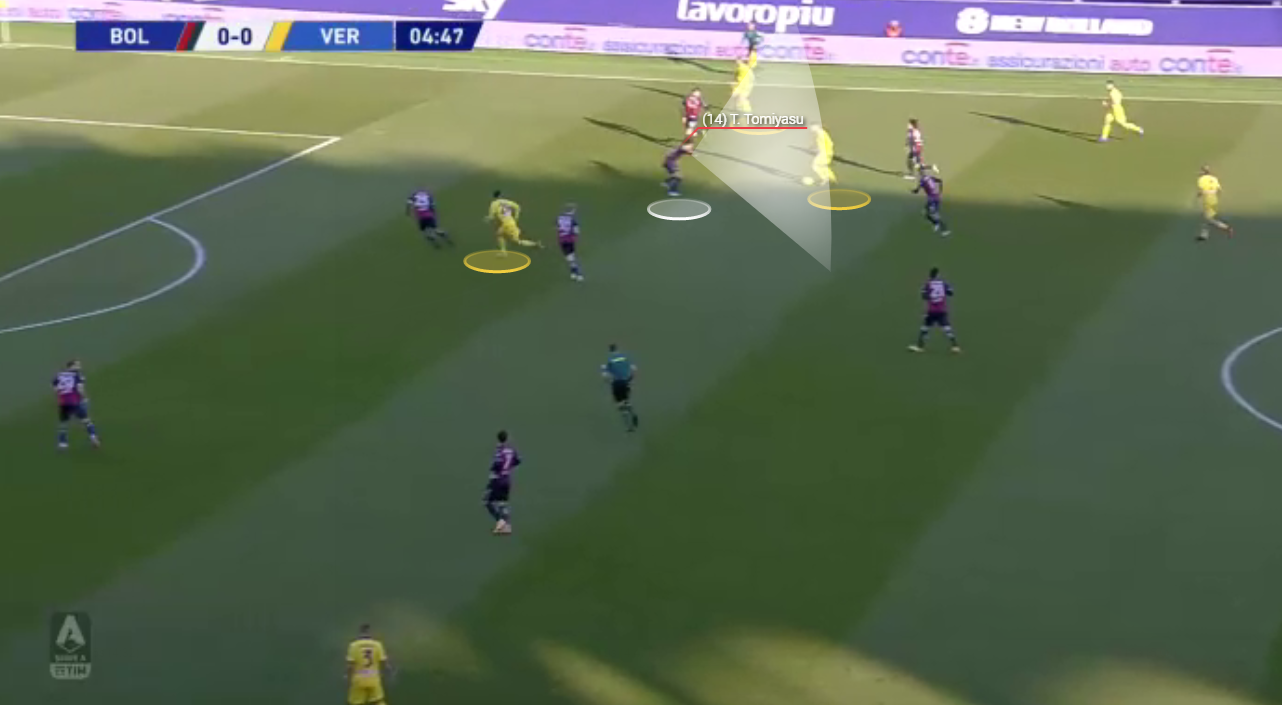 Here, we see Tomiyasu engaging the ball carrier 1v1. Just before this image, the defender had both arms outstretched to ensure that his teammates were aware of the threat of the central striker and the player wide and against the line.

His body orientation is square on while you would expect him to be side on but he gets away with this defensive posture because of his fluidity of movement and ability to defend inside or out. In the end, the man in possession attempts to play in the central striker. Tomiyasu blocks the pass before playing forward and starting a transition for his team. 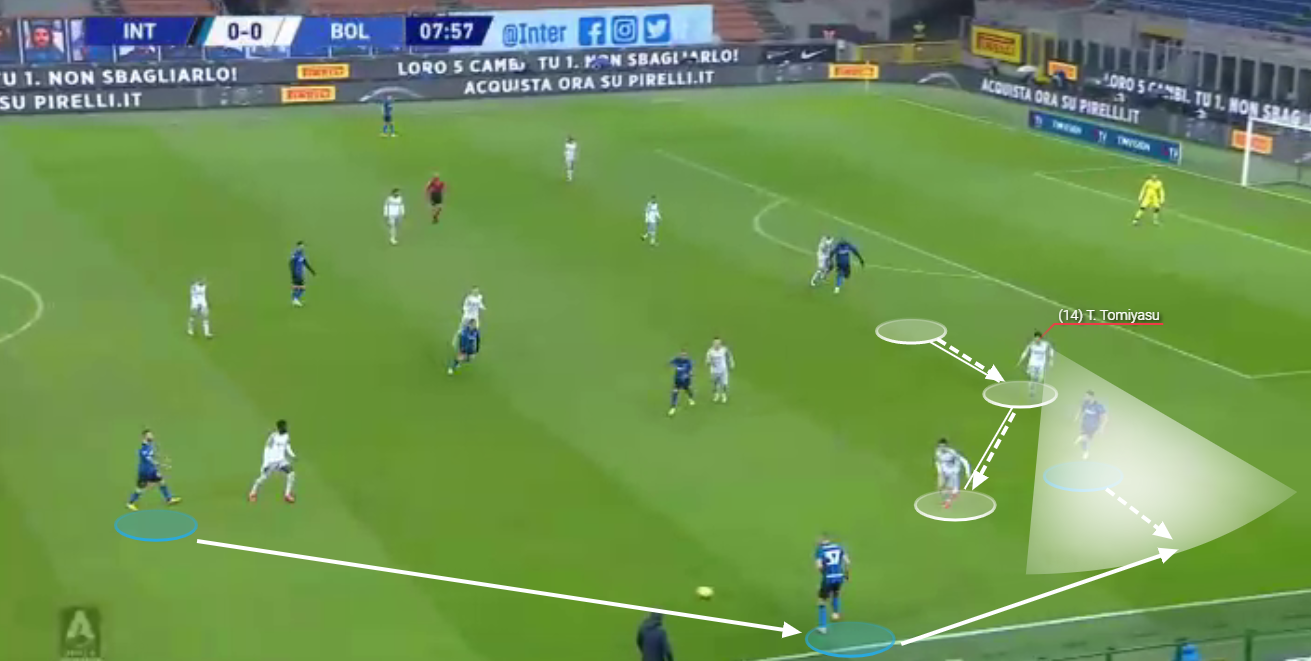 Here we see a situation as Internazionale are looking to play down their right. As the ball circulates to the wide player for Inter the wingback on that side for Bologna has to move to engage the ball carrier. This leaves the forward on that side free but again we see how effectively the Japanese defender reads the threat as he shifts outside to challenge for and win the ball.

Takehiro Tomiyasu is one of the most modern defenders currently playing in the top five leagues. His versatility and athletic ability, combined with his ability to join the attacking phase in possession of the ball make him a very effective contributor.

It comes as no surprise to me that Tomiyasu has outgrown Bologna and the Italian side now stand to make a significant profit on the player. If he does move to North London to join Spurs then it feels like an intelligent move for all parties. Do not be surprised to see the Japanese defender earning rave reviews next season, wherever he plays.