Paulo Fonseca’s Roma revolution continued this weekend with a late winner at a very strong Bologna. Roma have started the Serie A season really well under their new coach but this win was extra impressive against a side that has looked extremely strong thus far this season. This tactical analysis will look at the tactics of both sides in their clash on Sunday. 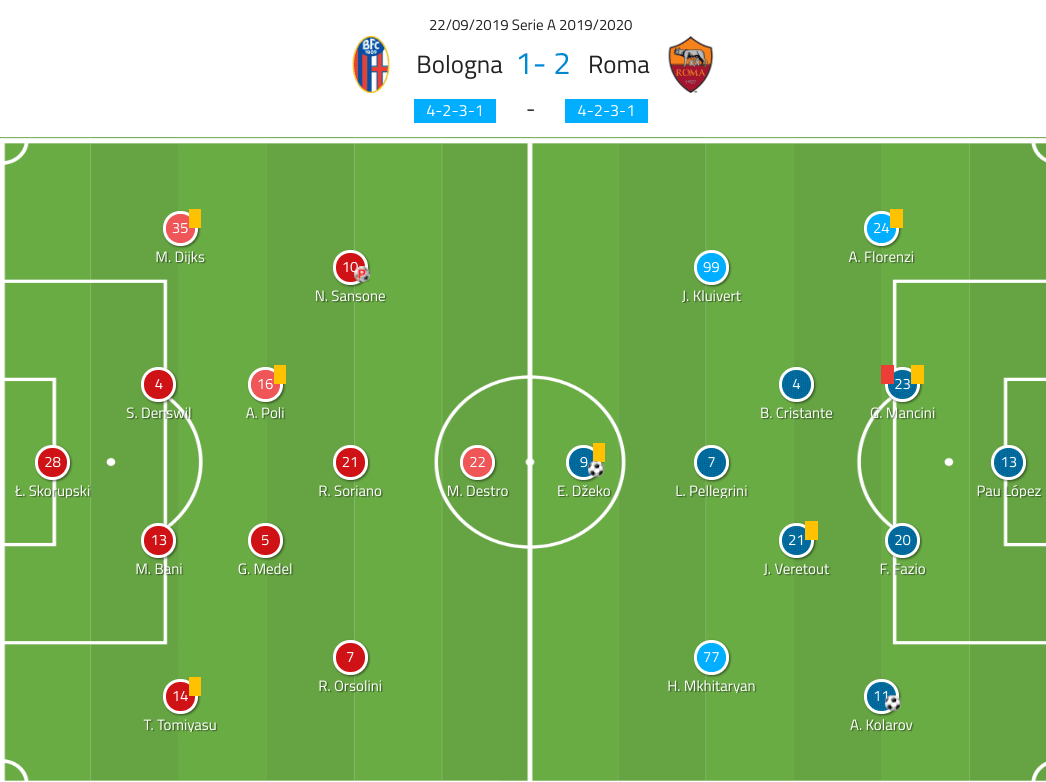 Bologna have found a settled shape and team in the opening games, so there was no surprise with their team selection. Riccardo Orsolini started on the right again after a stunning start to the campaign, while Japanese defender Takehiro Tomiyasu continued in his hybrid right-back/centre-back role.

It seems like Paulo Fonseca has found his preferred XI too as he named an unchanged team from the win against Sassuolo, meaning we saw Lorenzo Pellegrini continue as the number 10 while Henrikh Mkhitaryan stayed off the left in Roma’s attacking midfield trio.

We can already notice a change in Roma’s attacking structure compared to pre-season. In the summer, Fonseca deployed all three attacking midfielders in central positions behind the striker and had both full-backs playing high up the field. Now, he pushed Aleksandar Kolarov high on the left while Alessandro Florenzi performed a deeper, narrow function on the right to balance the wide positioning of right-winger Justin Kluivert. Kluivert’s wide position meant Pellegrini and Mkhitaryan (both yellow) were deployed centrally behind Džeko with the duo looking to play out of either half-space. These movements created the attacking structure highlighted below.

When building from the back, Florenzi often acted as a third centre-back. The difference in his positioning and that of Kolarov’s (black on the left) is clear to see in the image below. The central positioning of Mkhitaryan created a rhombus in midfield with Pellegrini and the Armenian in front of Bryan Cristante and Jordan Veretout. Again, we can clearly see the traditional winger role played by Kluivert on the right wing. 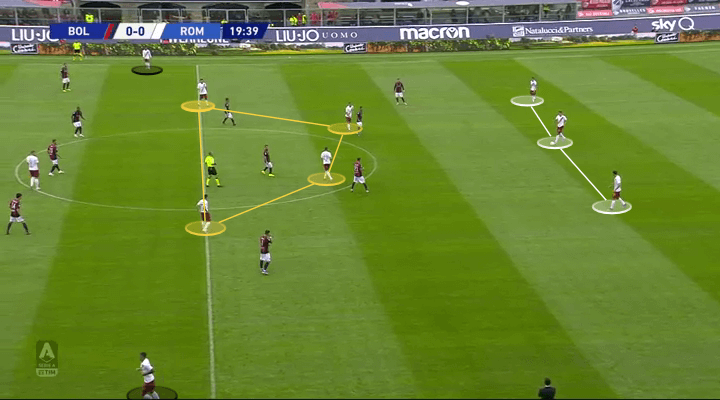 Pellegrini has been fantastic so far this season and he proved to be key for Roma when building from the back. Bologna largely pressed with quite clear man-orientations, as seen below, but Pellegrini often became a spare man and popped into spaces behind the Bologna midfielders, especially behind Nicola Sansone and Andrea Poli on the left half of Bologna’s midfield.

Additionally, Pellegrini was instrumental in Roma’s ability to progress the ball centrally higher up the pitch too. He was phenomenal at finding space behind Poli and Sansone, and both Veretout and Cristante did well to thread passes into his feet. The image below is a good example of this. On this occasion, Veretout (white) spots Pellegrini and threads the ball through Bologna’s midfield. 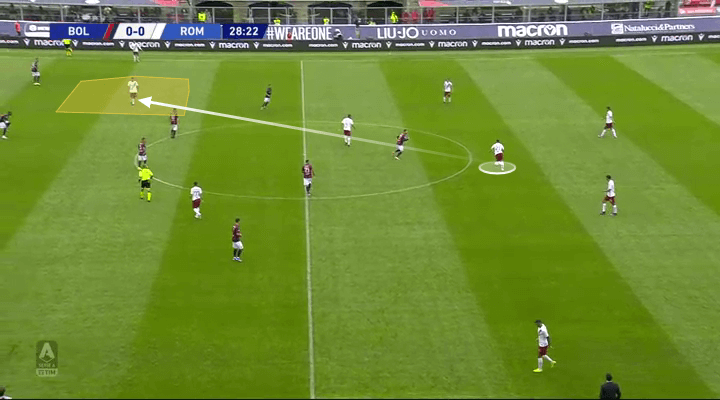 The image below highlights another of these situations. This time it was Cristante who played the pass into Roma’s number seven. Pellegrini’s close control and ability to turn quickly made him a real threat in these areas. 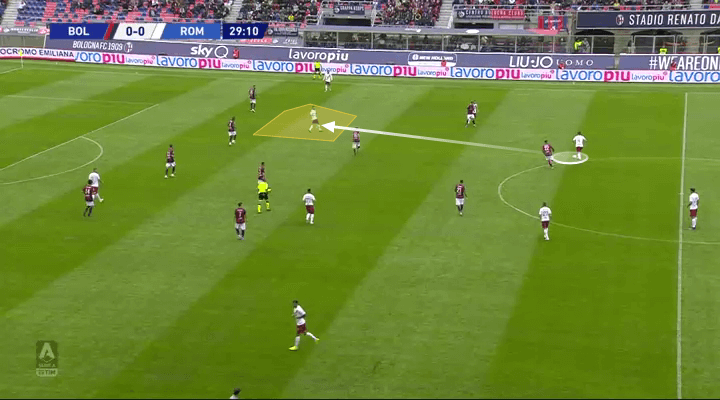 Another of Roma’s methods to progress the ball was the use of diagonal runs into depth from their two attacking midfielders. This was definitely the case on Roma’s left wing. As soon as Kolarov received the ball and Tomiyasu moved out to press him, Mkhitaryan or Pellegrini would make a run into the space the Japanese defender had vacated. The ball-near centre-back Mattia Bani was slow to close this space, which gave Roma a good chance of getting the ball into this area.

The image below highlights this approach. Here, Kolarov hasn’t even received the ball yet but Pellegrini had already realised what the situation was like and made a run into the space behind Tomiyasu. 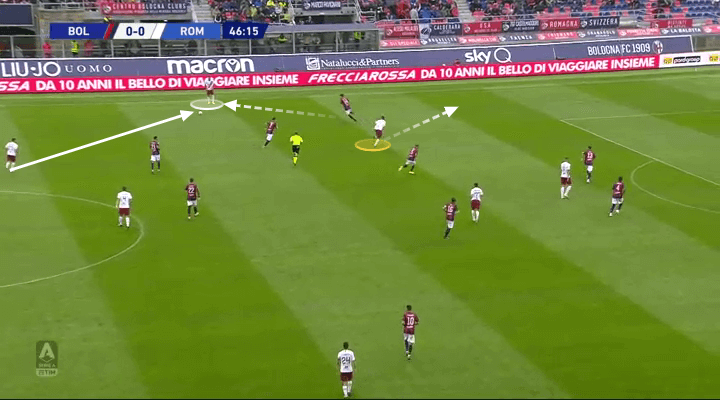 In the image below, Kolarov has just received the ball and Mkhitaryan instantly makes a run into the space behind Tomiyasu. 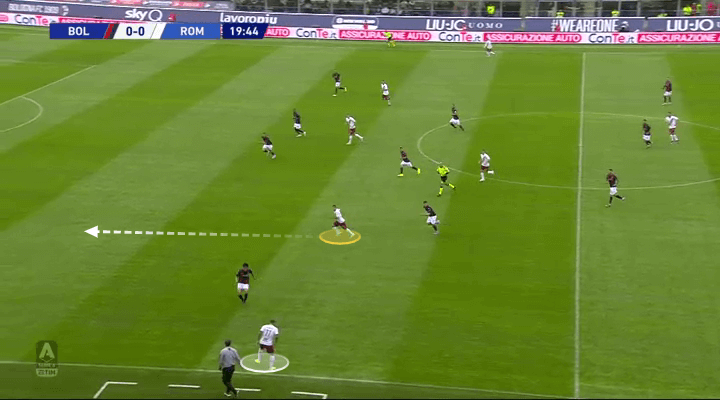 Again, we have a similar situation below. Kolarov receives, Tomiyasu presses and Mkhitaryan runs. As the Armenian makes the run, he drags a central midfielder with him and thus opens up space in midfield for someone else to exploit. This is the benefit of these types of runs even if the runner doesn’t receive the ball. 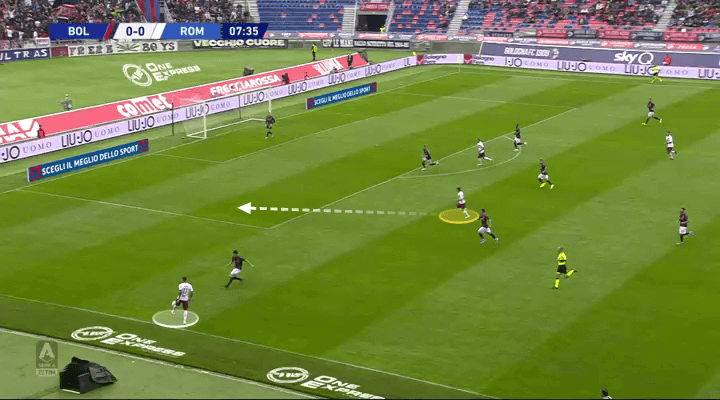 Roma always have interesting ideas under Fonseca and it was intriguing to see what we must assume were weaknesses that he had spotted in Bologna’s defence.

Bologna have been very impressive under Siniša Mihajlović and one of their most interesting aspects is their rotations. In the image below we can clearly see how they rotated their defenders in the build-up phase. The right-back Tomiyasu (yellow) moved inside to function as a third centre-back. The left-back, Mitchell Dijks (white), pushed high on the left. The two centre-backs, Bani and Stefano Denswil (both black circles), shuffled across to make the back-three happen. With Tomiyasu centred, the right-winger Orsolini provided all the width on the right. 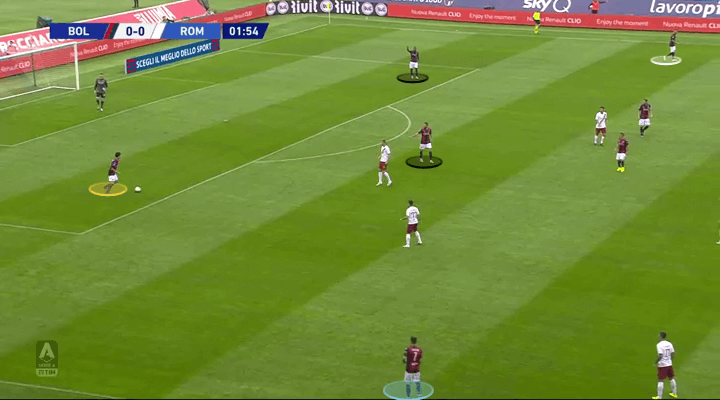 The most fascinating rotation Bologna used in their build-up was the movement of the central centre-back Bani. As Bologna constructed attacks in the first phase, Bani would move out of the back-three and position himself as a defensive midfielder. This created the diamond shape I’ve highlighted below. Additionally, it created a further horizontal line as Bani’s movement allowed the two central midfielders, Poli and Gary Medel (white circles), to remain in higher positions. 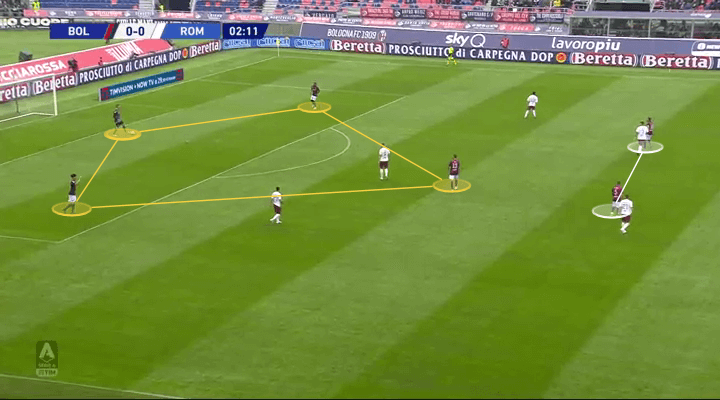 Overall, these movements created a 3-4-2-1 structure in attack since Sansone moved inside from the left wing when Dijks pushed high, which saw Roberto Soriano slide across to an inside-right position. We can see the shape below, albeit slightly off since Poli has moved wide. 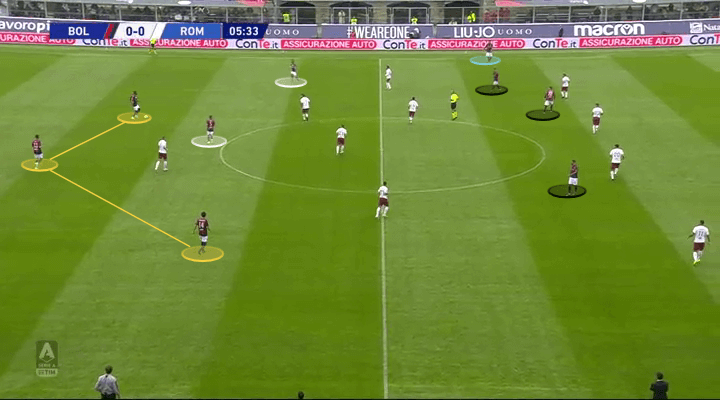 Denswil was key in Bologna’s ability to progress the ball given the quality of his passing. As we’ll see below, Roma pressed well, but Bologna had one interesting solution which is highlighted in the image below. This involved Poli (yellow) moving wide and opening a passing lane from Denswil into Sansone. The diminutive Italian could then receive in the left-sided half-space, turn, and look to progress the attack. 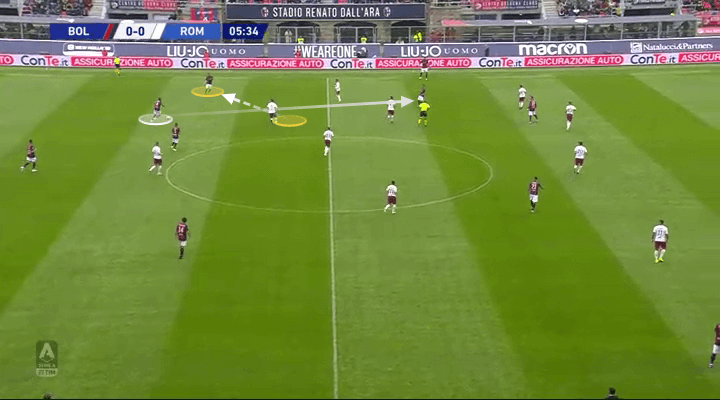 Fonseca obviously knew that Bologna are very good in possession, in fact, the Rossoblu averaged more possession than any other side in the opening three games. Therefore, Fonseca sought to press them high to stop them from getting into any sort of passing rhythm. As we see in the image below, Roma used man-orientations high up the pitch to prevent Bologna from having clean progressions of the ball from their defence. These man-orientations involved Mkhitaryan, Džeko and Pellegrini/Kluivert pressing Bologna’s back-three while Veretout and Cristante pushed up to mark Poli and Medel. There were exceptions, though, such as in the image below where Pellegrini (white circle) marked Poli and Cristante (yellow) covered behind Veretout. Also notice the aggressive positioning of Kolarov on the left. Especially when the ball entered the wide areas, Roma would overload around the ball and mark each Bologna player to prevent them from escaping the pressure. In the image below, Kluivert pressed Dijks, Pellegrini was pushing onto Denswil, Cristante marked Poli, and Florenzi stepped up to mark Sansone. Bologna struggled to cope with Roma’s pressing, especially in the first half, but there were signs that they could have exploited it better. The image below is a telling example of how they could have done this. As Denswil steps forward with the ball, Veretout and Cristante (both white circles) are marking Medel and Poli. This creates an open passing lane to Mattia Destro. He is completely free, so Gianluca Mancini steps out of defence to eventually foul him. But look at the positioning of Mancini’s centre-back partner Federico Fazio. He is a good four yards ahead of the other defenders, caught in no man’s land. If Destro could have laid the ball off to Soriano (21) straight away, Bologna could have attacked Kolarov 2 vs 1 with Soriano and Orsolini. 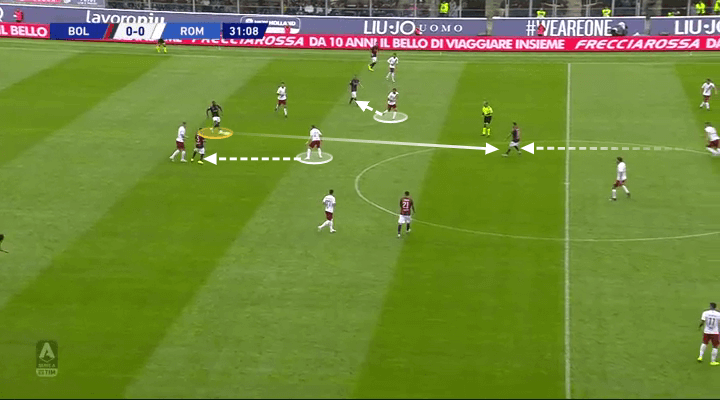 As this analysis has shown, Roma produced a good away performance to maintain their unbeaten record under Fonseca. Džeko’s late winner also meant Roma stay in contact with the top teams. Bologna have looked very strong this season so this win was definitely impressive and keeps Fonseca’s revolution going in Rome. Given the form of the likes of Pellegrini, Roma can probably look forward to a fun season as they look to return to the top four.