Had it not been for an unfortunate own goal, Dortmund would indeed have come away with three points. They were not clinical enough, and Frankfurt got their reward for standing toe-to-toe for the full 90 minutes. There were positives for both sides regardless of the result.

For Frankfurt, aside from the result, the fact that new signing André Silva got off the mark in his third game for the club was encouraging after a difficult spell at AC Milan. For Dortmund, they created enough chances to win and Jadon Sancho carried on his excellent run with a goal. That takes his Bundesliga tally to three goals and four assists in just five games.

However, along with their 3-1 loss to Union Berlin in August, this will be seen as costly dropped points for a side looking to regain the Meisterschale. This tactical analysis delves into the tactics used by Lucien Favre and Adi Hütter as they came face-to-face in the Bundesliga this weekend. 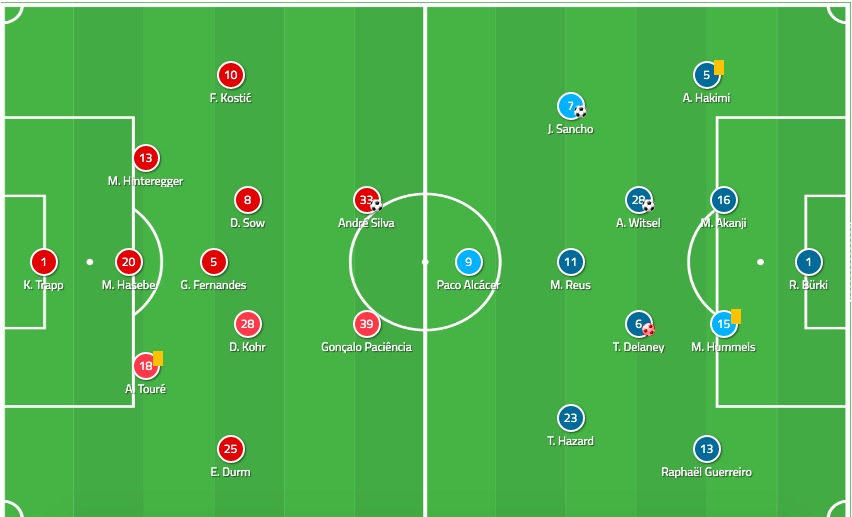 Dortmund stuck with the same side that drew 0-0 with Barcelona in the Champions League last week, fielding a 4-2-3-1. Julian Brandt would have been disappointed to miss out on the starting line-up, but Thorgan Hazard more than deserved his inclusion with a beautiful assist for Dortmund’s first goal.

Hütter also refrained from making changes despite Frankfurt’s 3-0 loss to Arsenal, fielding a 3-5-2. Filip Kostić and Erik Durm played as wing-backs, albeit Kostić is a far more attack-minded player than Durm.

Dortmund were dominant with 64.38% possession and completed more passes than Frankfurt even attempted, with 522 completed passes from 601. As always under Favre they were patient with their buildup play, waiting for openings to play the ball forward. Axel Witsel continued in his role as a deep pivot, dropping into the back four at times to receive the ball. However, in doing so he also created space for his centre-backs to break the lines with a direct pass into the forward line. Over the course of the game, Hummels played 16 passes directly into the forward line.

From the word go, Marco Reus hovered to whichever side of Paco Alcácer that Sancho wasn’t playing. Favre wanted Sancho to have as much room as he could in order to attack the opposition full-back with plenty of space to attack behind. Hazard tended to play slightly deeper than Sancho, and when he came deep to the right flank to receive, Reus would push past him and make a front two with Alcácer. At times, Sancho stayed very wide, rather than drifting into the half-space, in order to be able to receive quickly should they choose to switch the play.

Raphaël Guerreiro has developed into an incredibly important attacking wing-back, and his partnership with Achraf Hakimi is deservedly recognized as one of the best attacking wing-back combinations in the world. Both were excellent throughout Sunday’s fixture.

Throughout the game, Guerreiro pushed high into wide, attacking areas and completed all three of his attempted crosses. The analysis below shows one of his many runs to overlap Thorgan Hazard, in this case.

Frankfurt looked to use the pace of Kostić to help them counter-attack. Four of their five counter-attacks came down Kostic’s left flank, although only one ended in a shot.

As mentioned earlier, Kostić is a more attack-minded wing-back than Durm, and at times played as high as any other Frankfurt player. The heat map below demonstrates his attacking intent. 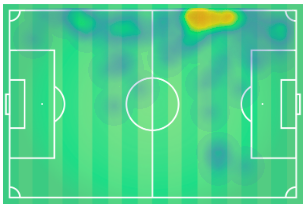 He operated in traditional left-winger areas, providing width to the attack as he looked to get behind Hakimi as often as possible. The battle between the two was an interesting match-up all afternoon and on the whole, Hakimi got the better of the exchange. 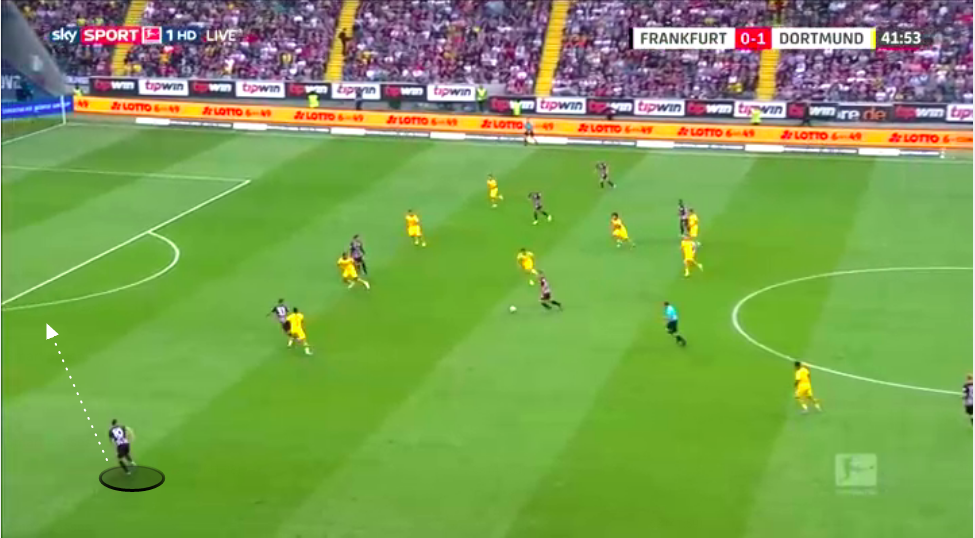 The majority of their play was focused down that left flank with them looking to get Kostić involved as frequently as possible. We can see how much higher than Durm Kostić he played and just how frequently he was passed to. One in every nine of Frankfurt’s successful passes was played to the Serbian wing-back. 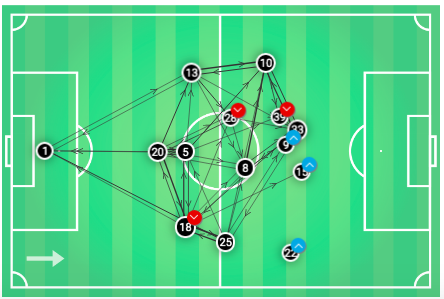 A glance at Dortmund’s defensive duels map shows this intention of Frankfurt but also highlights how successful Hakimi was at dealing with this pressure. Of Dortmund’s 67 defensive duels, 51% occurred down Hakimi’s side, showing he isn’t just an attacking full-back. He won 88% of his duels and restricted Kostić to two successful crosses from his six attempts.

It was clear after Thursday’s game against Arsenal that Hütter had addressed the crossing issue, where only 26% of Frankfurt’s crosses were accurate. This time they once more peppered the opposition box with crosses but were far more accurate, with 61.9% of attempts hitting their target.

It was an obvious tactic to emphasise crossing against Favre’s side. Before this game, four of the five goals Dortmund had conceded in the league this year had come from crosses. Lo and behold, both of the goals Frankfurt scored in this game also stemmed from crosses. Although Hakimi did an excellent job to keep the crosses to a minimum, Guerreiro didn’t have quite the same effect on his own side.

Despite their desire to play into Kostić, they found far more joy down the right flank with 62% of their crosses coming from the right side. 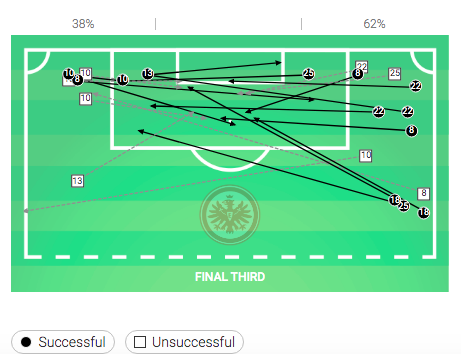 One of the negatives of Dortmund’s exciting, attacking wing-play is that they can leave the full-backs exposed. For the final goal, Timothy Chandler was given far too much room to pick out a cross, although it over-hit, was still able to meet Hinteregger who moved untracked into the box. 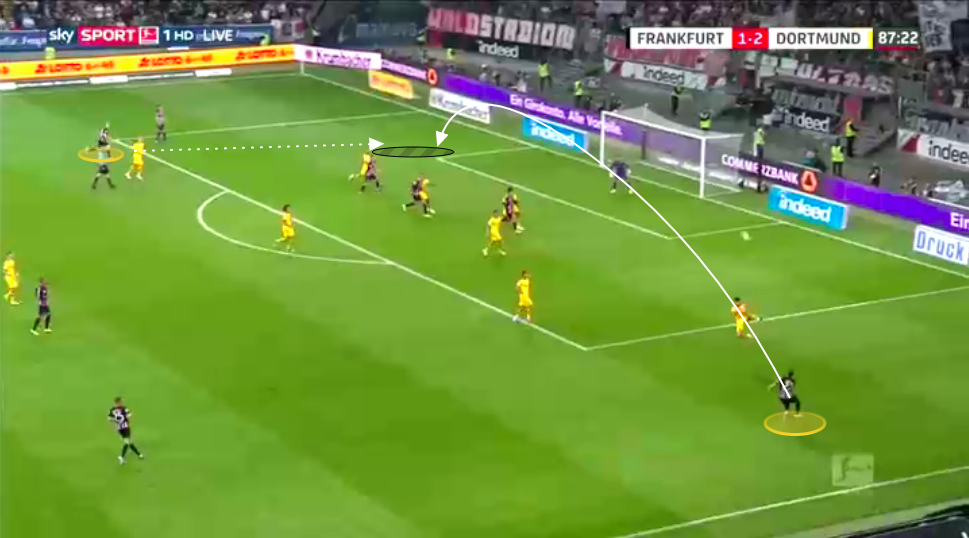 Why Frankfurt were fortunate to get a point

Frankfurt had two more shots than Dortmund over the game, recording 15 shots on goal. However, just 20% of these were on target. Dortmund were more accurate with seven of their 13 efforts hitting the target. In fact, Frankfurt averaged just a 0.06 xG per shot, whereas Dortmund’s was a 0.21 xG per shot. Although they hit the target more frequently we can see below that only four of these strikes were in areas difficult for the keeper to save.

Defensively Dortmund didn’t press for the majority of the game but sat deep and prevented Frankfurt from shooting from dangerous central areas. This led to Frankfurt taking shots further away from goal. 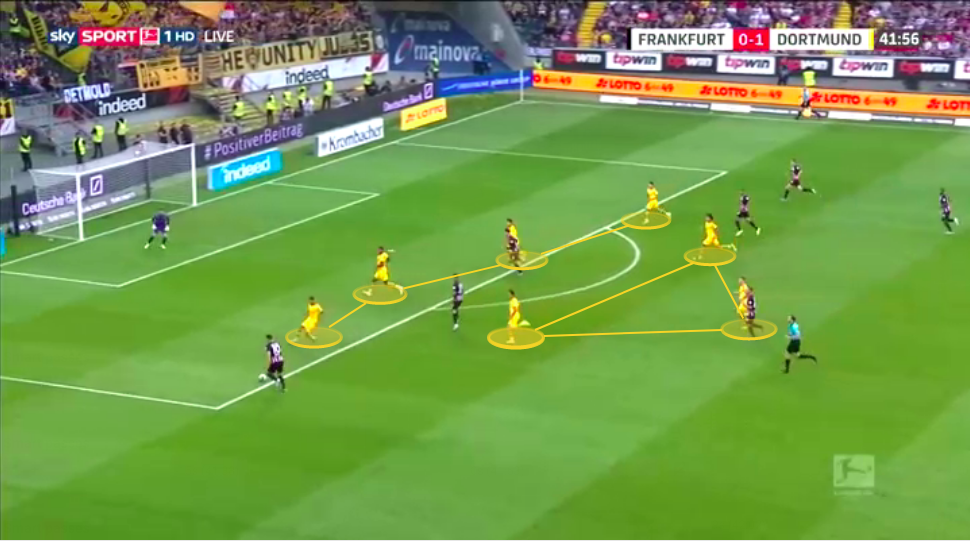 Frankfurt were also relatively sloppy on the ball. Their passing was at a below-average 77.16% accuracy over the game, compared to Dortmund’s 86.86%. This was partly down to their commitment to the long ball. Although both teams completed 55% of their long balls, Frankfurt attempted 18 more than Dortmund over the game, with 52. Overall, 14.48% of their passes throughout the game were long. They were also poor when passing into the final third- just 53.7% of passes into the final third were accurate. This could be attributed to the low defensive block that Dortmund kept throughout the game, committing numbers to prevent passes being played into central areas for the forwards.

Dortmund will be disappointed to have lost ground on their title rivals RB Leipzig and Bayern Munich, who both enjoyed comfortable wins. However, Frankfurt is a difficult place to go and come away with three points. Mainz and Augsburg are interestingly the only teams to have done so in 2019.

Although their quality of chances wasn’t quite the same as Dortmund’s, Frankfurt had a clear game plan. They stuck to it throughout and were rewarded in the end. The fact that Dortmund were found out from crosses again will certainly alarm Favre, and he will surely look to ways to fix this weakness.