In Lucien Favre’s Borussia Dortmund and Julian Nagelsmann’s RB Leipzig, Bayern Munich seem to have found serious rivals for the Bundesliga title this season. Against FC Köln, Bayern were the clear favourites and in need of points after their draw against Leipzig. Achim Beierlorzer’s Köln, on the other hand, struggled in their first Bundesliga matches this season.

The following tactical analysis will explain the reasons to Bayern’s win over Köln. Moreover, our analysis depicts Köln’s interesting tactical features that enabled them to create several opportunities against the reigning champions.

Bayern started into the game with a 4-2-3-1 formation. Although having played with a 4-3-3 system a few times already in this season, Niko Kovač decided to line up Joshua Kimmich and Corentin Tolisso as a double pivot behind playmaker Philippe Coutinho.

Köln, on the other hand, used a 4-1-4-1 shape to counter Bayern’s midfield trio. In midfield, Marco Höger was supposed to stabilise the defence in front of the backline while the more dynamic and creative advanced midfielders in Dominick Drexler and Ellyes Skhiri lent Köln more attacking power up front. Moreover, Achim Beierlorzer tasked his wingers, Kingsley Schindler and Florian Kainz, to attack down the flanks and put in crosses for striker Jhon Córdoba.

Instead of parking the bus, Köln tried to press Bayern in the opposition half. With a 4-1-4-1 shape, Achim Beierlorzer’s team attempted to prevent Bayern from playing out from the back.

However, their setup with only one attacker only enabled them to shut down the ball near centre-back while pressing. Often, Bayern created a diagonal passing lane towards the ball far central defender to switch play.

Bayern’s presence on the left side of the pitch was also caused due to Tolisso’s and Kimmich’s positioning. Either of the midfielders drifted towards the left side situationally and therewith created an overload together with the wide positioned Ivan Perišić and left-back Hernández. Right-winger Gnabry, on the other hand, tucked inside to receive passes within the half-space. Due to their advantage in numbers, it is not a surprise that Bayern created the best opportunities from the left side.

Köln’s biggest errors in defence happened within their back four. In order to prevent central offensive midfielder Coutinho from turning, one of Köln’s centre-backs moved out.

Bayern were capable of penalising this with simple one-touch passes from Coutinho. Another Bayern midfielder could in this case attack the vacated space and the central defender was left in a 1v1 with Robert Lewandowski.

Bayern’s first goal was scored exactly with such a combination. Joshua Kimmich started a progressive run into the space behind Köln’s midfield as Serge Gnabry had dropped in front of the opposition midfield to receive the ball just before. When Kimmich received the ball from Coutinho, he could assist striker Lewandowski with a simple pass through the gap that was created when their centre-back left his position as displayed above. Köln’s left-back also missed to close the gap and therefore, Bayern did not have much trouble to score their first goal of the day.

Way too often, Lewandowski could start a run into space behind the backline from a position between the centre-backs.

That was firstly facilitated by the central defenders as neither of them stayed close to the Polish attacker. And, secondly, the back-four lacked staggering and therewith offered huge gaps for through passes.

With Kimmich, Tolisso and Coutinho in midfield, Bayern had the right personnel on the pitch to penalise these gaps. Especially the latter one could often get into dangerous areas between the opposition midfield and defence. Therefore, he used his dribbling ability and often peeled away from his direct opponents carrying the ball upwards.

A similar situation occurred in the second half and decided the game. 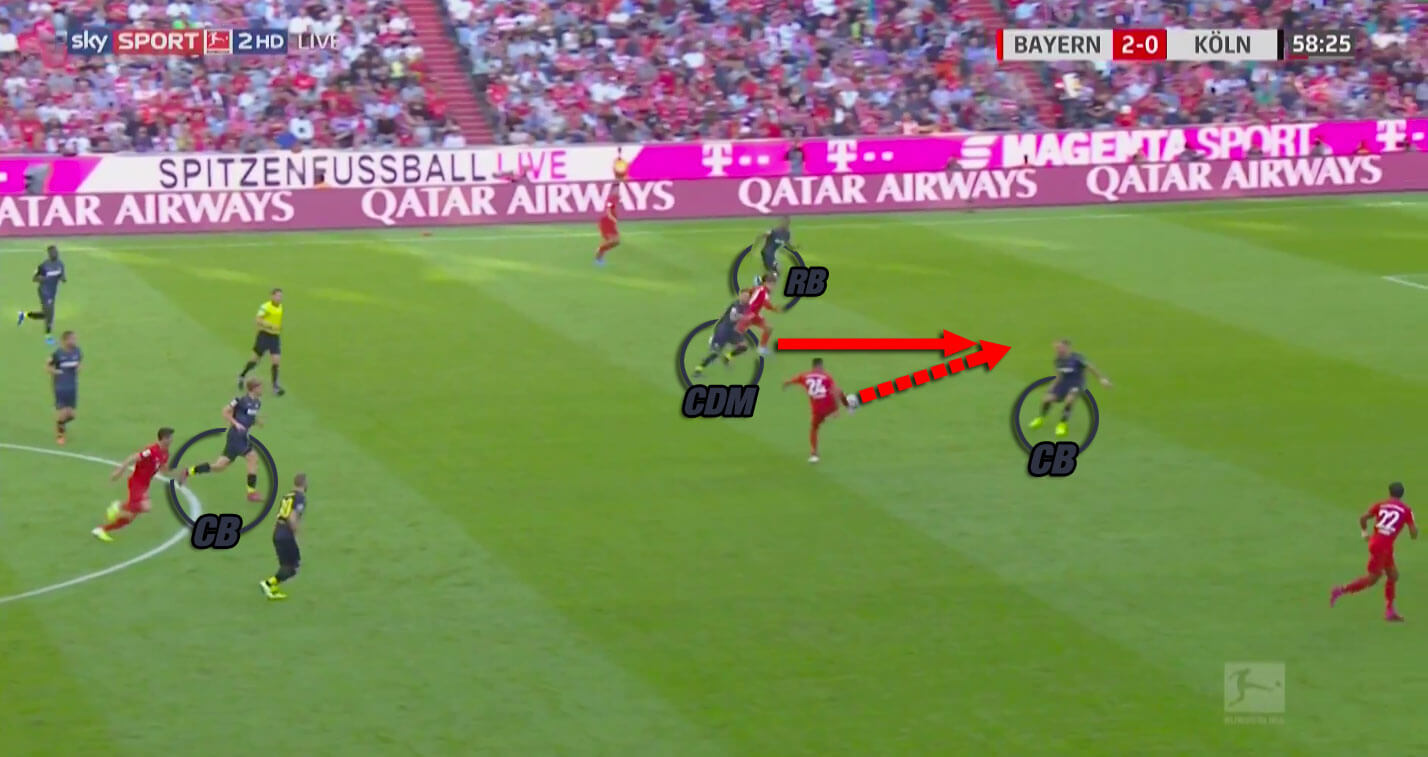 As a consequence, Coutinho was offered a gap to start into and since Bornauw was incapable of playing further forward, Bayern simply threaded the ball through the gap leading to a penalty caused by right-back Kingsley Ehizibue who was also sent off for his foul. Because Bayern had already scored the second goal from a corner-kick, this goal was the preliminary decision of the match.

During the attacking phase, Köln focused on progressing up the pitch on the wings. Especially left-winger Florian Kainz was supposed to be set into action in order to use his crossing ability.

Nevertheless, either Bayern’s defenders blocked the crosses, or they were too inaccurate and could be cleared.

Although the result might indicate something else, Bayern were not defensively solid for the whole match. At times, Bayern seemed a bit too passive when defending. The below situation, for instance, shows Bayern allowing Köln to finish their attack within the penalty area despite a clear numerical advantage.

Achim Beierlorzer’s team regularly operated with long diagonal balls towards their wingers. Therewith, Köln also cleverly made use of their advantage in pace on the right attacking side.

After regaining possession, they immediately attempted to bring right-winger Kingsley Schindler into play who attacked the gap between Bayern left-back Hernández and centre-back Jérôme Boateng.

One of the best features of Köln’s possession phase was their back passes. Around 15.5% of Köln’s passes were back passes which is quite high compared to Bayern’s 11.7% back pass rate. However, they turned out to be quite useful at times.

Once having reached the opposition half and being confronted with an organised Bayern block, they were intelligent enough to build up a new attack with the help of their central defenders. As anticipated by Köln, Bayern would use these moments to move higher up the pitch again which Köln penalised by playing quickly around Bayern’s block to create a better attacking opportunity.

However, Köln failed to make use of these opportunities as they often missed accuracy within the last third throughout the whole game. This also counts for the last stage of the game, when Köln were still offered opportunities despite a numerical advantage of Bayern since a Köln defender saw the red card.

All in all, Bayern could win the game with four goals difference but yet the match was not a demonstration of Bayern’s power. Quite contrary to that, Köln showed that Bayern is vulnerable on the break and with better efficiency in front of Bayern’s goal, the score could have been different. Whereas Köln’s offensive tactics worked out, their defensive ones failed. Especially in the backline their central defenders were too often caught out of position. Due to Bayern’s individual quality, these two aspects were decisive as the attacking department of Niko Kovač’s side penalised Köln’s mistakes.

Niko Kovač will have to improve Bayern’s defensive cover in order to avoid offering their opponents promising opportunities on the break. Beyond that, this game showed that Coutinho has found the right position in the number ten role and that he strengthens the Bayern attack.