After a poor season in 2018/19 which saw Roma finish sixth in Serie A, optimism has carefully returned to the capital at the dawn of a new season. The man leading them into this campaign is the Portuguese coach Paulo Fonseca. Fonseca brings a very specific and energetic style of play with him and this tactical analysis scout report will look at his tactics and how they will suit Roma’s squad.

I will begin by looking at the style of play Fonseca looks to implement, starting with his defensive tactics followed by his preferred setup in attack. Afterwards, I will look at the squad he has at his disposal and how those players suit his approach.

The first thing to note when talking about Fonseca’s teams is that they are energetic. They are all about energy, energy and some more energy. The players press intensively when they do, although Fonseca’s Shakhtar rarely pressed high but more often opted to start from about ten metres inside the opposition’s half. They defend in a positionally-orientated 4-2-2-2 or 4-4-2 depending on the positions the two wide midfielders pick up. The initial aim is to close off the centre and force the opponent into the wide areas where the team will overload around the ball, block passing lanes and press aggressively. The collective aim is also to keep a very compact shape, as highlighted by the two images below.

We have already seen examples of this defensive style at Roma. The below image highlights Roma’s pressing in their first pre-season friendly. The 4-4-2 pressing shape is clear, the right-back joins the press high up the pitch and Roma look for the trigger of the back pass to move even higher.

As mentioned above, back passes are an obvious pressing trigger once the team has an opportunity to press as a collective. In the above image, they are well-positioned to do just that and then the forward just awaits the back pass before sprinting forward to press.

The other obvious pressing trigger is passes into opponent’s positioned on the touchline with players around him. Shakhtar often used the touchline as a teammate as they pressed aggressively in these areas where the player in possession obviously has limited options. The players closest to the ball will press the ball-carrier while the others block passing lanes. As a result, teams find it difficult to break out of these areas once Shakhtar overload them in this way.

Fonseca’s preferred possession structure can largely be depicted as below. He pushes his full-backs very high and they are the sole providers of width since the wide attacking midfielders move inside to play extremely narrow. They usually start in either half-space but often move even further towards the centre. This leaves the two centre-backs and the two central midfielders to initiate the build-up.

We have already seen the signs of this approach in Roma’s opening friendlies under Fonseca. Playing against low-level opposition, Roma have had great opportunities to practise their attacking movements and patterns. As highlighted in the image below, Fonseca has instilled his ethos of having three central midfielders attacking quickly.

It is already clear that Fonseca will keep his three attacking midfielders centred and open up the wide areas for the full-backs. The team shape then looks as it does in the image below with a base of two centre-backs and two central midfielders behind a narrow front four and extremely attacking full-backs. 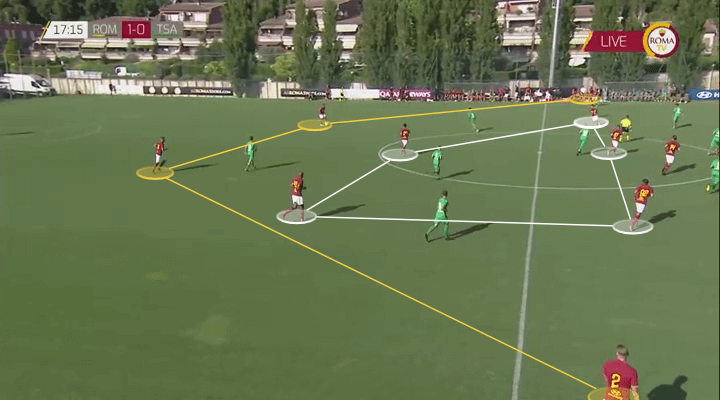 The positioning of the attackers in this way opens up the possibility of multiple passing options to progress beyond the opponent’s midfield line. This is obviously done to increase the chances of the attackers to link up successfully between the lines, but the narrow positioning also forces the opponent to defend more narrow, thus opening up the flanks even further for the full-backs. Often, the striker also drops deep to become an option which will give Roma four central attackers, as highlighted below.

The combination play between the three attacking midfielders will be key to Roma’s attacking play. We have already seen instances of good link-up play between the likes of Grégoire Defrel, Diego Perotti and the youngster Emanuele Spinozzi. The below image highlights this.

The movement and combination play between the attacking midfielders will be crucial for Roma’s attacking play since so much is expected to go through them as Roma will look to progress the ball centrally in what promises to be quite crowded areas. Quick thinking in those situations will be a key asset for whoever wants to grab a starting spot in Fonseca’s side.

How will these tactics suit Roma’s squad?

Roma have an interesting squad after some very good additions this summer. Pau López is a goalkeeper joining from Real Betis. López excels with his feet and has very good distribution, which suggests he will be first-choice ahead of the Swede Robin Olsen given Fonseca’s willingness to play out from the back.

In defence, Kostas Manolas has departed but Gianluca Mancini has arrived. The 23-year-old enjoyed a breakout season at Atalanta last season and has forced his way into Roberto Mancini’s Italy XI too. Federico Fazio is expected to partner him in central defence but his lack of speed might be an issue for Fonseca’s energetic style. Juan Jesus provides competition and Davide Santon has been used at centre-back in pre-season. This is an area Roma might look to strengthen ahead of the transfer window closing.

Leonardo Spinazzola has been made the big signing this summer and arrives from Juventus with a very good reputation despite limited playing time in recent seasons. He burst onto the scene at Atalanta and is an excellent full-back going both ways but especially in attack with his sublime dribbling ability. He will be perfect for Fonseca at left-back, or right-back if Fonseca wants the veteran Aleksandar Kolarov to start on the left. What Kolarov lacks in energy and speed, he makes up for with a fantastic left foot. On the right, Rick Karsdorp and Alessandro Florenzi will fight for the right-back slot. At full-back, Roma are well-suited to Fonseca’s tactics.

In central midfield, Roma have lost the experience and heart of Daniele De Rossi. His departure will be felt both on the pitch and particularly off it where his leadership and connection with the fans will be missed. However, Amadou Diawara has been brought in to replace him, and the former Napoli midfielder is extremely well-suited to Fonseca’s style. He is very energetic and mobile whilst being extremely comfortable in possession. His vertical passing is excellent and he will be key in breaking lines centrally to progress the ball. He can play both the mobile pressing role as well as the more defensive controller role in central midfield.

Other options include the Italian internationals Bryan Cristante and Lorenzo Pellegrini as well as the French duo of Steven Nzonzi and new signing Jordan Veretout. If Diawara is used as the defensive controller then Veretout, Pellegrini and Cristante will be best suited to partner him, but Nzonzi can play that role if Diawara is used as the more mobile one. Either way, this is probably Roma’s strongest area. In pre-season, Fonseca has even used Pastore in central midfield, suggesting an additional option.

Further upfield, Roma also have some good options for the three attacking midfield roles. They are apparently chasing Suso, but the likes of Nicolò Zaniolo, Diego Perotti, Justin Kluivert, Ante Ćorić, Grégoire Defrel, Cengiz Ünder, Pastore and Pellegrini make up a very interesting bunch for these three roles. As it stands, I expect Ünder, Pellegrini and Perotti to start the season.

Ultimately, Edin Džeko is still the first-choice striker. If he remains at the club that is since Inter have made it very publicly known that they would like to bring him to the Giuseppe Meazza. Patrik Schick is his back-up, alongside Defrel. If Džeko leaves, then he needs to be replaced. Gonzalo Higuaín has been mentioned as a possible arrival if the Bosnian does leave.

All in all, the Roma squad seems well-suited to Fonseca’s tactics and only really needs a centre-back and possibly another striker. A possible team could be akin to my suggestion below, where Veretout and Nzonzi, in particular, will challenge in central midfield. 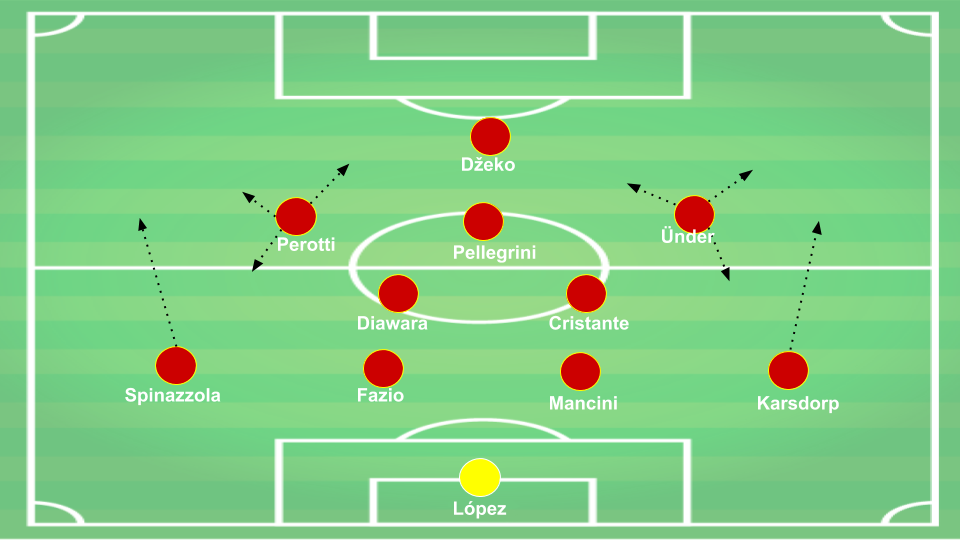 Paulo Fonseca is an exciting appointment and Roma will be a very attractive team to watch this season. This season preview has highlighted his attractive tactics and an analysis of the squad at his disposal. If you combine the two, it is rather easy to get excited for Roma’s upcoming season with Fonseca at the helm.