Marcelino took charge of Valencia last summer and led them back to the Champions League in his first season. Valencia are one of the biggest clubs in Spain but after some disastrous managerial spells, Marcelino has managed to turn the club around. His method has been a very compact defence, rapid counter-attacking and a lot of energy. In this tactical analysis, we look at his style of play and what the season might hold for Valencia.

Marcelino worked his way up the coaching ladder in his native Asturias eventually impressing at Sporting Gijon, Recreativo De Huelva and Racing Santander before failing at Real Zaragoza. He then had another spell at Racing before moving to Sevilla. It didn’t work out in Andalusia but Marcelino’s next move would. Appointed at Villarreal, he first led them to promotion back to the top flight before leading the club to three successive top-six finishes. He also led the club to the 2015/16 Europa League semi-final. After a disagreement with the board at Villarreal, Marcelino left the club and was then appointed at Valencia in May 2017.

From Villarreal to Valencia he brought the obvious tenets in his tactical approach. He wants a very energetic team which works together at all times and presses and harries the opposition. His teams always set up in a narrow 4-4-2 and look to break out of their extremely compact positionally-orientated defensive shape with rapid counter-attacks. This has worked superbly at Valencia whom he led to fourth last season.

Valencia have had a summer of a bit of change in terms of their playing squad. The main departure is Goncalo Guedes who was brilliant last year on loan from PSG. There are rumours that they look to sign him permanently but no deal has been agreed yet. Andreas Pereira has also returned to his parent club Manchester United after his loan spell. The same goes for Luciano Vietto. Valencia have also sold players who were bit-part players last term or out on loan such as Joao Cancelo who’s gone to Juventus for €40m. But Guedes is the only loss to the starting eleven of last year.

In terms of recruitment Valencia have done well. The biggest deal is the €25m paid to Inter for to make Geoffrey Kondogbia a permanent Valencia player but if he plays like last year then he will be worth every penny. The young defender Mouctar Diakhaby has joined from Lyon but he will probably start as cover. Celta Vigo midfielder Daniel Wass, Red Star Belgrade’s midfielder Uros Racic and Sporting CP right-back Cristiano Piccini has also been added to the squad. Finally, Valencia, with their symbol being a bat, has signed football’s Batman with Michy Batshuayi joining from Chelsea on loan.

Let’s move on to how Marcelino sets his side up on the pitch. His Valencia lines up in a 4-4-2 formation as shown in the image below. I’ll look at the three most vital components of his football philosophy below. 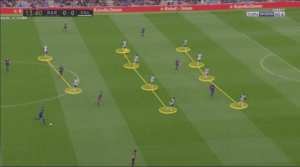 As highlighted in the above image, Marcelino wants his side to be extremely compact in defence. He deploys a positionally-orientated defensive system where the players move in unison across the pitch depending on the positions of their teammates, the ball, the space and lastly their opponents. They don’t mark opponents but instead defend collectively to close off available space. The goal is to protect the centre and force the opponent wide. When the ball enters the wide areas the entire team overload on the ball-side to prevent the opponent from getting out.

Below you see an example as Valencia are very compact and narrow with close distances between players both horizontally and vertically. 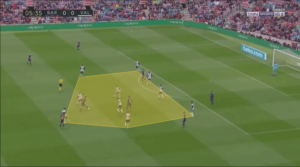 Specifically, the relationship between the defence and midfield is critical for Marcelino’s approach. The two strikers are the counter-attacking outlets (which I’ll discuss later) and can’t always get back quick enough but the two banks of four always stay in position defensively. Look at those lines between midfield and defence! To use an Italian expression; there’s not enough air to breathe in there. 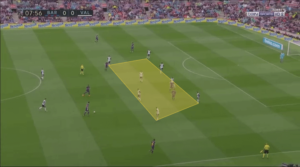 The wide midfielders have a key role to play. Whereas some coaches (Mourinho, for example) wants their wide players to track all the way back outside their own full-backs, Marcelino has a different idea. His wide midfielders’ first job is to prevent central progression for the opponents and force them into wide areas instead. Below we can see how right-midfielder Carlos Soler keeps a central position and covers potential passes forward. The Real Sociedad player is forced into a pass towards the wing instead. As that ball is about to get played, the right-back has the responsibility to sprint out and press. The wide midfielder then covers his full-backs pressing action. 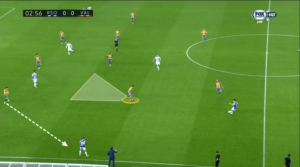 While Marcelino’s defence is almost strictly positional Valencia are sometimes man-orientated when pressing high. A good example of this approach can be seen below away at Barcelona. The front-two start the press while the positions of Valencia’s central midfielders are different. Here, they’ve followed Barcelona’s very high to participate in the press. 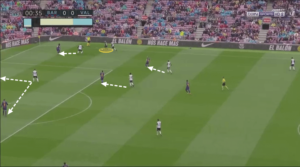 The strong defence has been one of the keys behind Valencia’s rise under Marcelino. Their compactness is extremely impressive and perhaps there are ideas in place to become an ever more effective pressing team. That would make them even harder to play against.

Valencia are good in possession and can create chances from their passing and combination play, but the main threat they pose comes from rapid counter-attacking. They were ruthless last season and had the perfect players for such a style with the likes of Guedes, Rodrigo and Santi Mina.

The main reason they were so effective was based around how quickly the players read the situation and then made vertical runs beyond the ball-carrier. Often, Valencia’s counters started with a pass or long-ball to one of the strikers, Zaza in the example below. As soon as he’s received the ball there were one or two players making runs beyond him. In the image below we see both Guedes and Rodrigo making runs into depth and Zaza plays the Portuguese in-behind. 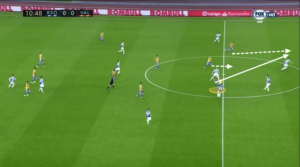 Below is another example with Kondogbia playing the first pass into a striker. Already we can see the runs being made by Rodrigo and Pereira. 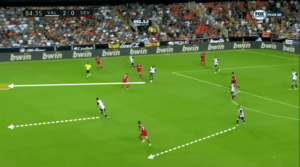 As the striker has now received we can see how the runs continue and the ball is played into depth for Valencia to go on to score. The willingness to make these runs and the understanding and quality to pick them out are the keys to Valencia’s ruthless counter-attacks. 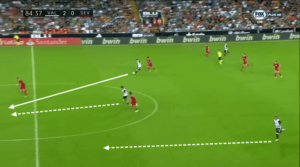 In possession, Valencia’s 4-4-2 changes slightly with the full-backs being really attacking down the sides and the wide midfielders moving inside into the half-spaces. Basically, this creates a 4-2-2-2 formation in attack. One well-established pattern they use is the overlap from the full-back who is the played into depth by the wide midfielder who has moved inside. Below, Soler has come inside from the right and plays Nacho Vidal in on goal for the young right-back to score. 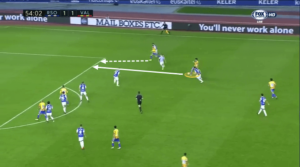 And below is another goal coming directly from these rotations in wide areas. Guedes in possession has come inside from the wing and the overlapping run from Jose Luis Gaya creates a 2 vs 1 situation against the Barcelona full-back Semedo. Gaya is played through and then sets up Rodrigo to tap in from close range. 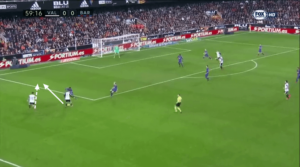 The rotations with the wide midfielders coming inside make these combinations natural given the wings are left free for the full-backs to attack. But the movement also means Valencia get four players in central positions and therefore forces the opposition to centre their defence thus leaving the wings free to attack. This very simple piece of movement from the wide midfielders make Valencia a much tougher team to defend against.

With Marcelino in charge, Valencia fans can dare to dream. Their return to the Champions League has brought excitement and optimism to the club again. With no key players (except the on-loan Guedes) leaving in the summer it seems Marcelino’s men can look to challenge again at the top of La Liga.