Andreas Pereira has been waiting in the wings for his chance at Manchester United for a while now, having gone out on loan to La Liga clubs Granada and Valencia in the past two seasons respectively. At one point, it was unlikely that he would ever make the grade at the club, but his impressive performances in pre-season in the absence of Nemanja Matic convinced Jose Mourinho to start the Brazilian in United’s first league game of the season, against Leicester City. It is important to note that Pereira has spent the majority of his career as an attacking midfielder, either centrally or on the flanks, and therefore he is new to a role as the deepest midfielder in a 4-3-3. Nevertheless, it is in this position that Mourinho sees Pereira thriving, and his performances in pre-season as well as against Leicester suggest that the United boss may have got this call correct.

Perhaps the most important tactical aspect for the ‘pivot’ in a 4-3-3 is his positional intelligence. The player tasked with playing in this role has to have superb spatial awareness, as his position on the field potentially affects that of every other outfield player. Despite this being his first season playing in such a role, Pereira was superb positionally, varying his whereabouts on the pitch in accordance with the phase of play and the location of the ball. His heat map and touch map from the game, provided below, will illustrate this further: 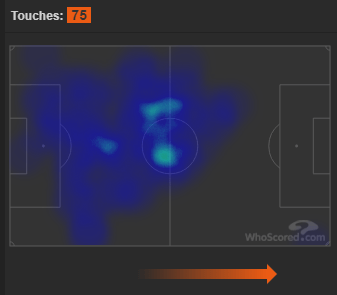 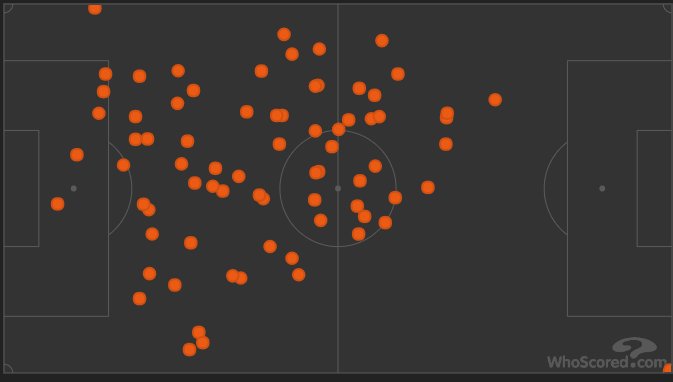 Pereira usually dropped in between, or rather, just in front of Eric Bailly and Victor Lindelof, United’s centre-backs, which allowed them to move wider, and thus also allowed the full-backs to get further up the pitch. This was not rigid though; the Brazilian was intelligent enough to move up the pitch when needed, especially on the left when Pogba surged upfield.

This positional awareness was extremely important to United’s build-up play, and contributed towards the Brazilian’s excellence on the ball as well.

As stated above, Pereira was superb on the ball, with a 91.4% pass success rate. The nature of his role becomes more evident when we look deeper into the numbers: Pereira made 58 passes during the game, of which only 9 were long passes and 1 was a through ball, while he only attempted to find a teammate in the final third of the pitch 10 times. This shows that the Brazilian’s remit was to recycle possession and maintain the tempo of United’s passing. It was not his job to provide defence-splitting passes; rather, it was to give the ball to the players who would do that. Nevertheless, the simplicity of this role was extremely important in ensuring that United maintained a decent tempo throughout the game, rarely slowing down or keeping the ball for the sake of it. He would usually find a man in space, rarely passing to a teammate under pressure or otherwise unable to receive the ball. While this may seem like a basic requirement from a midfielder, its execution is vitally important to a team’s ball retention and positional strategy, and the Brazilian did a fantastic job to make sure that United did not lose their structure through a poor pass. A few examples of the intelligence of Pereira’s passing are shown below:

As the deepest member of the midfield trio, Pereira would have to put in his share of defensive work. He is not the most imposing physical specimen, but once again, his job was not to use brute force, but rather to position himself intelligently enough to reduce scoring opportunities for Leicester. This is once again borne out by the stats: Pereira made 5 interceptions in the game, the most of any United player, while also chipping in with 3 tackles, only fewer than Matteo Darmian. Pereira occupied the zone in front of United’s defence and was usually at arm’s length from his direct opponent, James Maddison. His positioning and its role in shutting down Leicester attacks are illustrated below:

Andreas Pereira did exceptionally well in a position that he is not accustomed to playing in for Manchester United, and his success there has given Jose Mourinho another midfield option to consider for upcoming games. Nemanja Matic looks certain to be the first-choice player for that position when fit, but the Serbian was extremely overworked last season and looked quite tired as the campaign wore on. Pereira provides capable backup for Matic, and his skill-set would certainly allow him to deputise for Fred and Pogba as well. It is thus worth keeping an eye on one of Old Trafford’s biggest prospects this season, who at the age of 22 may finally establish himself amidst a familiar environment, albeit in an unfamiliar role.