TSG Hoffenheim was very successful the last seasons with the youngest head coach in the Bundesliga, Julian Nagelsmann.

Before Nagelsmann will take over RB Leipzig in 2019/2020, he will remain head coach of 1899 one further season. Hoffenheim will attempt to surpass last year’s performance on international soil, which ended in a disaster in the Europa League. This season Hoffenheim will even compete in the Champions League. But how do they line up after losing key players as Uth and Gnabry?

Build-up play with a back-three

Hoffenheim builds up play with a back-three and tries to break lines with diagonal passes. Only the wing-backs provide full width to enable switching from side to side and thereby the creation of gaps. A single pivot in front of the back-three provides a short passing option whereas the other central midfielders position themselves further away from the ball. The deep positioning gives the centre-backs more space and more time in the build-up.

Taking a closer at the occupied zones in Hoffenheim’s possession phases, the intention of Nagelsmann becomes clear. Several attackers are positioned between the midfield and defensive lines of the opposition. 1899 search for a way to get the ball between these lines in order to receive and turn in this dangerous zone or to drag out defenders and exploit the space in behind.

Variety in the attacking phase

Julian Nagelsmann is already known for his 3-1-4-2. Whereas the Hoffenheim coach adjusted his formation in his first Bundesliga matches a lot of times, he now sticks to his system. He always deploys a system with a back-three, two wide players and mostly with one holding defensive midfielder, two offensive midfielders and two strikers. Sometimes he switches to a double pivot in defensive midfield and to one striker up front.

However, Die Kraichgauer are very flexible in their attack and also use long balls to make themselves unpredictable. In 2016/2017 Sandro Wagner acted as a target man for long balls in order to lay them off. New signing Belfodil might be a player who could play in this role.

Often 1899 use “Up, Back & Through” combinations to progress the ball up the pitch. Thereby Die Kraichgauer play diagonal balls since this allows the receiver to be in a better position to turn towards the goal, if possible.

Without the ball, Nagelsmann prefers to force the opposition to commit errors in passing in order to regain possession.

“My philosophy is to regain possession without tackles.” (Julian Nagelsmann, Augsburger Allgemeine)

On the contrary of other coaches, the youngest coach of the league does not lay much emphasis on defensive duels. Instead, his players should cut off passing lanes and press the ball.

Being out of possession Hoffenheim attempts to organise their defending shape as fast as possible. If necessary, TSG drops and if possible they keep their height. No matter what, Hoffenheim will press as recently as they are well organised.

Taking a closer look at the defensive work of Nagelsmann’s squad, it is obvious that the young coach chooses a mix of zonal and man-to-man marking. Spectating a match, one can clearly see 1899 players communicating with gestures to make sure every opponent close to the ball has got one direct defender.

On the ball near side, Hoffenheim players mark their opponents as close as possible always staying between the opposition and the own goal.

On the ball far side, defenders move towards the ball marking their opponents “lose” but staying closer to the goal as well.

Often one of the wing-backs starts to press and leads the opponent into the centre where the midfielders defend man-oriented.

There are still some players remaining at Hoffenheim who played a vital role in Nagelsmann’s system.

To begin with, former central-defensive midfielder Kevin Vogt acts as a central defender of the back-three and is the new captain of the team. The transformation from midfielder to centre-back was made to have one pivotal point in the back line with passing qualities to play out from the back.

Secondly, Demirbay is the player who is responsible for the penetration of the opponent’s defensive block. With 1.6 key passes per game, the 25-year-old played the most key passes of the whole Hoffenheim squad. In addition to that, he was the player with the second most dribbles after Gnabry in the Hoffenheim squad. Not to forget, the passing abilities of Demirbay who plays many key passes and thereby creates chances, as you can see below.

In the attack, Kramaric might play an important role this season. The Croatian is a very fluid striker, who can drop into midfield to receive and create goal scoring opportunities. Moreover, he is a threat to any opponent with precise long distance shots. In the line-up shown above, Kramaric would most likely replace Szalai or Belfodil.

As Rudy and Süle one year ago, Bayern signed another player from Hoffenheim in Serge Gnabry. However, Gnabry’s transfer was different since Munich signed him already before the last season and he played for TSG on loan. The winger played a key role in the 1899 squad and will be a loss for the club. Gnabry scored 10 goals and assisted 5 goals in 2017/2018.

Furthermore, Mark Uth leaves the club to play for Schalke 04 in the next season. With 14 goals and 8 assists, Uth was involved in even more goals than Gnabry.

To replace these huge losses in the Hoffenheim attack, 1899 signed several strikers such as Belfodil, Joelinton, Felipe Pires and Bittencourt who can also play in midfield.

Central midfielder Vincenzo Grifo joins Hoffenheim again after he left the club in 2014 because he was not able to make the breakthrough. After two successful seasons in Freiburg (61 matches, 20 goals) and one season at Borussia Mönchengladbach, he now seems ready to strengthen the squad.

Hoffenheim will have a tough challenge being a Champions League participant. As every year, Nagelsmann has to replace important key players. The head coach will have to form a team as fast as possible. Last season Hoffenheim struggled with that and was eliminated in the group stage of the Europa League.

However, the defence and midfield of Hoffenheim did not change much compared to the last season. This fact lets Hoffenheim and the Bundesliga hope for a better performance in the international competition. 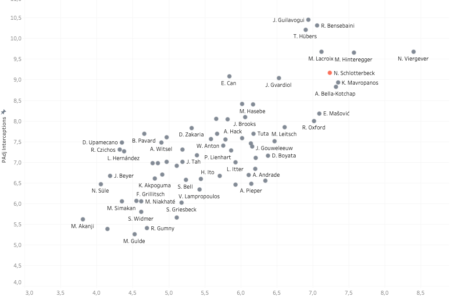