Schalke 04 surprised everyone in the last season when Domenico Tedesco lead Königsblau to the second place in his first Bundesliga season as a head coach.

Doubt was high when Schalke announced their new coach in Tedesco, the second youngest coach in Germany’s highest league with only eleven matches experience in the second division for Erzgebirge Aue.

However, the young coach convinced the Schalke fans with a lot of tactical knowledge.

Just a few days before the start of his second season, we take a closer at his tactics and whether Schalke is able to continue their path or if the successful season was just a one-hit wonder.

Königsblau has been successful in 2017/2018 but also earned some criticism concerning their style of play. Schalke had a possession rate of only 47.9%, less than the relegated Hamburger SV (48.9%). Therefore they were criticised for playing a destructive football.

“After half a year in the second division, Domenico becomes head coach of a Bundesliga team. Then, he is just doing it like Mourinho and positions 18 players around the penalty box. This is the death of football.” (Ewald Lienen)

Even though their style of play sometimes seems destructive, Schalke uses their possession phase very effectively and are far away from “kick and rush”. Stats prove that Tedesco’s side only played 57 long balls per game, which is the second lowest number in the league. 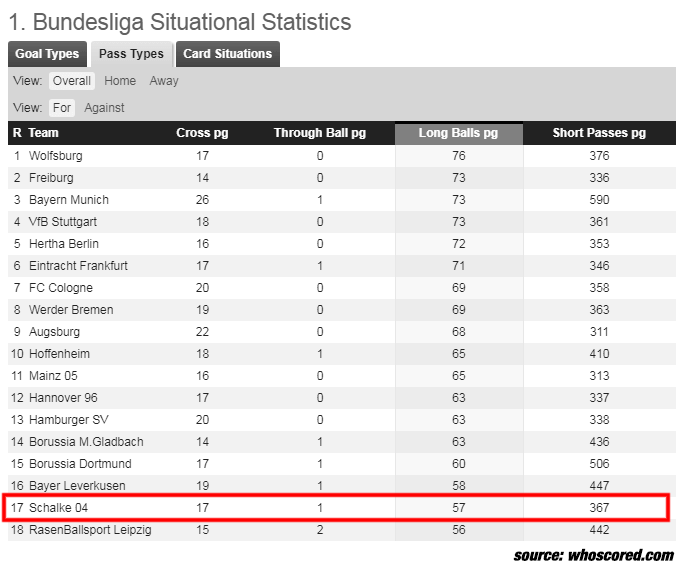 Building up, Schalke will most likely use a 3-5-2 or 3-4-3 shape. In their pre-season match against Aue, S04 used a single pivot to overplay the first pressing line. The centre-midfielders played a bit higher up the pitch and used counter-movements to disorganise the opposition organization. One central midfielder would situationally drop when the other one moves up. 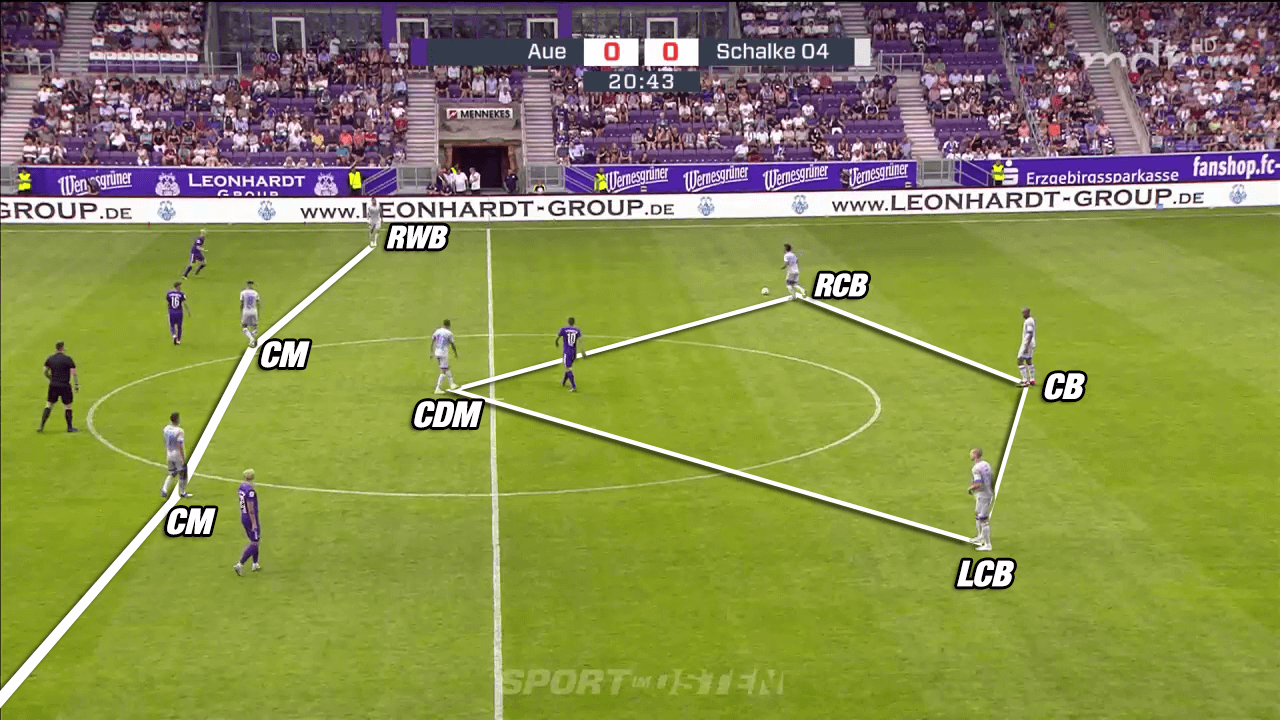 Tedesco provided his side with an enormous defensive stability resulting in the third lowest number of conceded goals (37).

Schalke coach Tedesco banks on a back-three which can be transformed into a back-five. Die Knappen mainly used three different systems throughout the last season. The formation was dependent on the opponent’s system. The idea lying behind the changes from match to match is to reflect the opposition. That way Tedesco’s side was able to press the opposition man-oriented. This is a reasonable approach given the fact that winning duels is one of the strengths of Schalke. 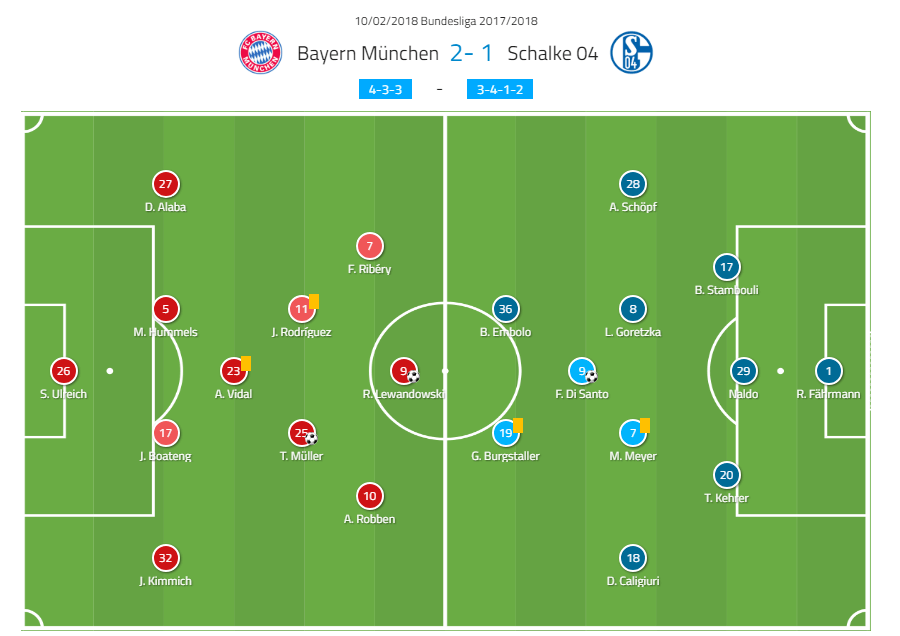 The picture above shows how S04 set up in their last clash against Bayern Munich. Tedesco pressed the centre-backs with two strikers and reflected Munich’s midfield. One central-midfielder should avoid the single pivot of Bayern to participate in build-up. The two central defensive midfielders were in charge of the more advanced midfielders Müller and James.

Thereby Schalke was able to disturb the build-up of teams who prefer to dominate with possession. After regaining possession S04 showed quick and dangerous counter-attacks leading to five goals in 2017/2018.

Playing against Aue in pre-season, Die Königsblauen also used a man-oriented high press system. This might be the first sign that Schalke will continue this approach.

Offensive 1v1’s as the key

Taking a look at the stats, it is noticeable that Die Königsblauen attempt way more dribbles than most Bundesliga sides. According to whoscored.com, Schalke held with 9.3 dribbles per game the second highest amount in Bundesliga season 2017/2018. 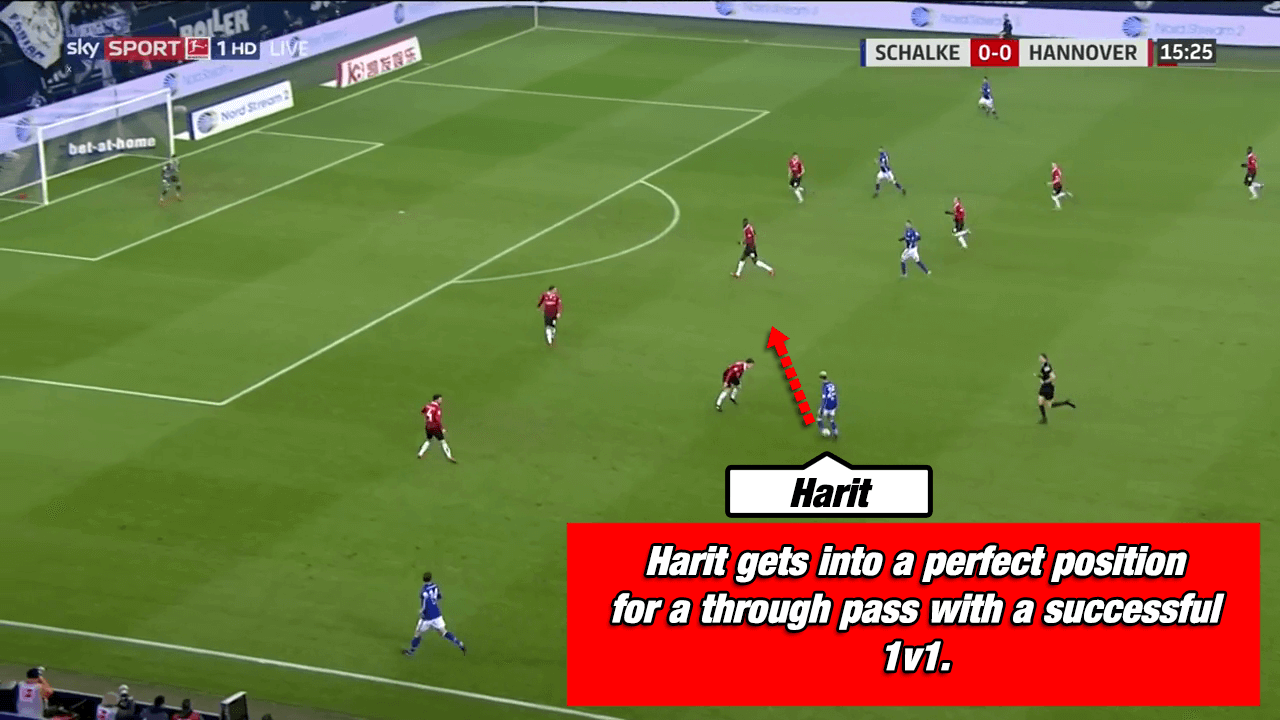 Schalke mostly uses dribbles in order to get into advanced areas. Either to play a through pass or cross from there or to take a shot from distance.

Naldo, playing as a centre-back in the middle of a back-three, was definitely one of the key players for Schalke last season. The Brazilian won 77% of his aerial duels. Thereby he was a weapon in set-piece situations as well as a trustworthy defender of crosses.

Amine Harit was key in several matches for S04, too. He can break lines by dribbling or occupy multiple opponents and thereby create space or isolate teammates. The last picture shows Harit assisting the leading goal against Hannover with a great 1v1 followed by a through pass.

Guido Burgstaller is the actual top scorer (11 goals in 2017/2018) and will hold faith with S04. The physically strong striker can act as a target player for long balls or participate in short passing combinations.

Last but not least, Daniel Caligiuri flourished under Tedesco with 10 assists in the last season. The wing-back is defensively very solid and gives Schalke stability in transition moments from offence to defence. Thanks to him, Schalke often have got full control of the right wing.

It is no surprise that Heidel signed Salif Sané, the only defender who won more aerial duels on average than Naldo last season to gain even more defensive stability. 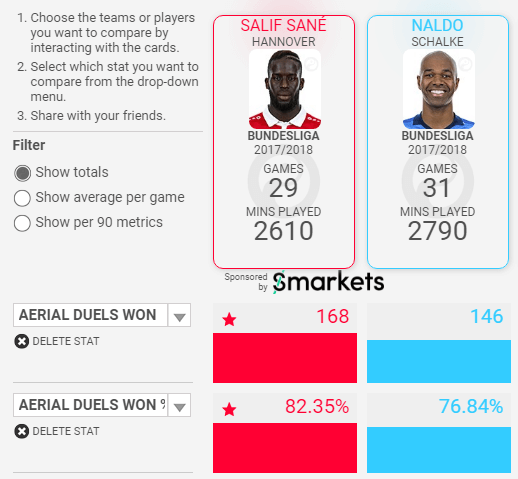 The second signing which is worth to be mentioned is the signing of Serdar. The central midfielder played for Mainz 05 in the last season. He is known for his dribbling qualities and is a player similar to Amine Harit who already verified that Tedesco’s style suits players who like to search for 1v1’s.

Mascarell as a more defensive-minded midfielder might replace Meyer.

Moreover, Schalke signed Uth who will enforce competition on the striker position. Uth is a very fluid striker who is efficiently using his goal scoring opportunities. Furthermore, the former Hoffenheim player likes to drop and play through passes himself to assist his teammates.

Schalke 04 will be challenged in the next season. Königsblau will play Champions League and Bundesliga and thereby have additional match load. Teams like the favorized Bayern Munich, Schalke’s rivals Dortmund as well as Leverkusen, Leipzig and Hoffenheim will all aim at directly qualifying for the Champions League causing a tough competition.

All in all, S04 will have to replace Meyer and Goretzka but will use a very similar style of play as in the last season. The transfer period showed that S04 will stick to their style of play and just replace their leavings. Although opponents will adapt themselves to Tedesco’s side and Königsblau will experience the role of a favourite in the Bundesliga, there is no reason why Schalke should not be able to continue their successful path. But time will tell us! 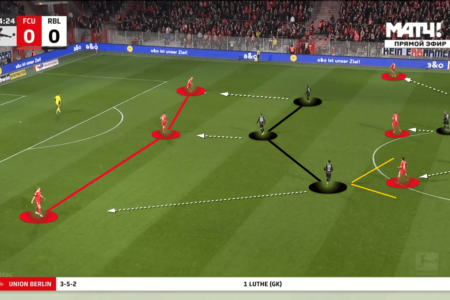 The Red Bull football factory has been a revolutionary operation, that has changed the game with training methods and recruitment […]