Red Bull Salzburg have dominated the Austrian Bundesliga since being taken over by the Red Bull group in 2005; they have won nine league titles and five Austrian cups in the thirteen years since the takeover. RB Salzburg has also turned into a fertile breeding ground for young players, whose mettle and quality is tested in the lower-pressure surroundings of Austria before being transplanted to sister club RB Leipzig in Germany. Bernardo, Dayot Upamecano and Naby Keita are just three examples of young players who moved from Salzburg to Leipzig in recent years, and in the case of Bernardo and Keita, then went on to secure a big transfer to a Premier League club. 19-year old Austrian playmaker Hannes Wolf may be the next wunderkind to go down this pathway to European and global stardom.

Wolf rose to prominence a couple of seasons ago, when he was the central force behind Salzburg winning the European Youth League for the first time. The playmaker scored seven goals in seven games and assisted both goals in the final against Benfica, while they also overcame Barcelona, Paris Saint-Germain and Manchester City on the way to the final. His displays earned him his senior debut for the club that season, but it was the following year that Wolf truly made his mark. The 2017/18 campaign saw Wolf score 12 goals and assist a further eight in 45 appearances as Salzburg won the Bundesliga and reached the semi-finals of the Europa League; their best ever European campaign. His form earned him a maiden call-up for the senior international side last year, and there have been rumours linking him to Premier League side, Everton, ahead of the new season. We will now have an in-depth analysis of Wolf’s playing style and his strengths and weaknesses.

Hannes Wolf is a versatile player, but his preferred role is that of a number 10, as the image below shows. 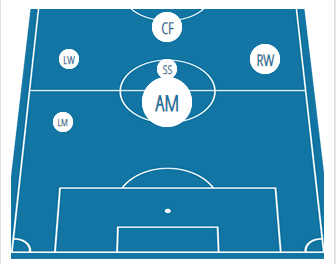 He has been used primarily in that position, although as stints on both flanks and even as a striker show, the youngster can fit into different systems and requirements when the opportunity arises. His heat map from the season gone by, shown below, provides more detail about Wolf’s position on the pitch: 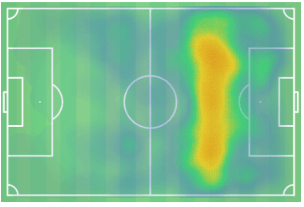 One can see that he takes up positions typical of a modern playmaker – Wolf drifts across the width of the pitch, looking for space and linking up with his wingers and strikers in order to pull opposition defences out of shape.

Due to his ability to move across the pitch to find space between the lines, Wolf is an extremely effective playmaker. He usually tries to find a pass quickly to maintain a high-tempo passing game, and while this does have an impact on accuracy, it is an area of his game that can be refined over time. One of his preferred moves, in fact, is to lay off the ball with his first touch, usually after having come short to receive the ball so that a teammate has moved into space he just vacated. This sense of positional awareness and tactical intelligence is impressive for a 19-year old, and will only improve as he gains further experience of top-level football.

His involvement in the game is borne out statistically – Wolf made an average of 31 passes per 90 minutes in all competitions last season, with a pass accuracy of 76%. This number reflects his tendency to try a risky pass more often than not, also shown by the fact that only 65% of passes made forward by him were accurate, as opposed to 86% of those made backwards. Eight assists during the 2017/18 season translated to 0.14 assists per 90 minutes, while his xA figure was marginally higher at 0.19. These numbers paint a picture of a playmaker who is always looking to make things happen, and while he needs to improve his pass accuracy and assist numbers, it is an extremely promising start to his career.

Allied with his willingness to pull the strings is his movement and positioning on the pitch. As mentioned earlier, Wolf drifts all across the width of the pitch in the final third, looking to combine with quick passes to release a teammate behind the opposition defence. A few examples of this are shown below:

Given the role Wolf plays for his side, he often has to dribble his way past opponents to create space for his playmaking abilities. He attempted 5.95 dribbles per 90 minutes last season with a 60% success rate while suffering 1.75 fouls per 90 minutes. These figures show that he needs to work on his take-ons, as more successful dribbles will open up the pitch. However, he does manage to attract fouls, which shows that opponents struggle to stop him from getting away at times. An increase in both these numbers would make for a devastating combination, which would indicate Wolf’s success in getting past his opponents by one way or the other.

Wolf scored 12 goals during the previous season; however, he was never renowned as a goalscoring midfielder/playmaker. His position just behind the striker allows him to get into the box frequently, as demonstrated by the fact that he had 3.24 touches in the opposition box per 90 minutes, and his finishing is usually composed, with low, precise shots into the corners his preferred modus operandi. Wolf managed 2.68 shots per 90 minutes last season, but only 45% of those were on target, highlighting a clear shortcoming in his game. Nevertheless, it is encouraging to see how often he takes shots, with only some more work on finishing drills needed to make him more dangerous in this regard.

While Wolf is predominantly an attacking force, RB Salzburg’s high-pressing style of play means that he has his share of defensive work when not in possession. This is reflected by the fact that he made 2.14 interceptions every 90 minutes last season while attempting 6.06 ball recoveries in the opposition half, with a 72% success rate. Wolf’s job is to press and harry opponents the moment Salzburg lose the ball; a task he has done relatively well so far based on the numbers.

Hannes Wolf is similar to modern playmakers like Christian Eriksen and Mesut Ozil; he looks to create space by moving across the width of the pitch, while always trying to attack and create opportunities for teammates. He also has an eye for goal and does his bit defensively, and while there are obvious areas for improvement, such ability at just 19 years of age points towards an extremely successful football career.