Since Dietrich Mateschitz’s company Red Bull took over RB Salzburg in 2005, they won the Austrian Bundesliga incredible 13 times. In addition, they lifted the Austrian cup six times and will play for the first time in the Champions League in the season 2019/20.

Because of the fact that Red Bull owns RB Salzburg and RB Leipzig, 16 players moved within the last years from Salzburg to the German club who finished this season in the third position behind Bayern and Dortmund. The Austrian Hannes Wolf belongs to these 16 players and joins Leipzig in this summer.

This tactical analysis will profile the Austrian allrounder and will describe the reasons why RB Leipzig wanted him in their team.

Wolf was born on 16 April 1999 in Graz. During his childhood and youth, he played for the youth teams of four small Austrian clubs before he joined RB Salzburg’s U16 in 2014. He played for the U16 and U18 of the Austrian top club. Furthermore, he made seven appearances in the UEFA Youth League in the season 2016/17 and won it with the U19 of RB Salzburg. In these seven matches, he scored seven times and made five assists.

In the campaigns 2015/16 and 2016/17, he played combined 35 matches for RB Salzburg’s second team Liefering in the second division of Austria. Also, at the end of the 2016/17 season, he played his first games for RB Salzburg and really got a part of the team in the summer of 2017. He also debuted for the Austrian U21 national team in 2017 and already played 10 games. However, he hasn’t made an appearance for the Austrian senior team yet.

In the last two seasons, he made combined 49 appearances in the Austrian Bundesliga and scored 16 times. In addition, he made 11 assists. However, he played in total 89 games for RB Salzburg and will join RB Leipzig in this summer.

Positioning and his role in RB Salzburg’s team

Marco Rose’s team played an astonishing football within the last two seasons. They were known for their offensive-orientated football with short passing combinations, a high pressing and a counter-pressing. Wolf mostly played behind the two strikers or on the right side in the midfield of RB Salzburg’s 4-4-2 with a narrow diamond in midfield.

Since Rose’s team dominated most of the games with the aid of possession and tried to use short passes to find their way to the opponent’s goal, the offensive midfielders like Wolf had a lot of freedom. This gets visible when you look at his heatmap of this season.

For RB Salzburg’s tactics, it was always important, that the player on the ball has got enough passing options to get forward. In the image below, Wolf provides exactly such a passing line due to his intelligent positioning.

Since the Austrian top club used an enormous aggressive pressing and counter-pressing, Wolf also had defensive responsibilities. Especially his qualities when it comes to counter-pressing are truly incredible. On average he made 4.57 recoveries per game in this season and 72.3% of them were in the opposing half. In the image below, Wolf’s team just lost possession. However, he starts a sprint and uses his pace and defensive ability to win back the ball for his team.

His vision and calmness

The 20-years-old offensive allrounder always radiates a sense of calm on the pitch. Even though he’s a very dynamic dribbler and player, he always knows what to do next. Whenever he combines that with his incredible vision, Wolf is able to create great moments.

His talent to always know where his teammates are is incredible. In the image below you can see that two opponents are closing in at him. However, he still manages to see and find Munas Dabbur with a great cross. Logical, Dabbur is able to score. To make such an assist, a player needs a good vision and technique and Wolf has got both of it.

As this analysis will show later, he is also very dangerous in front of goal. You never have the feeling that he’s nervous at all in front of the goalkeeper. He just looks where the easiest way is to put it past the goalkeeper and then mostly scores. In the shot below he hasn’t got a great angle and the goalkeeper comes out as well. However, Wolf spots the far corner and easily scores the goal. 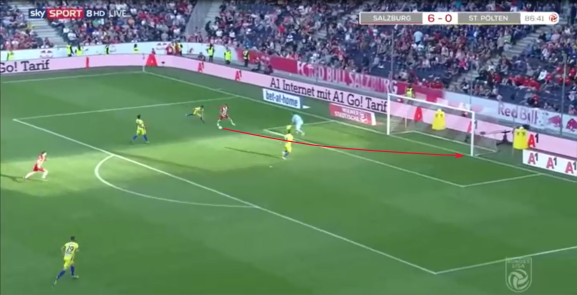 The Austrian midfielder has got beside his vision also the technique to play great passes and to dribble past defenders. In addition, his ability to get into free space or find a teammate with his first touch is amazing. To be able to solve problems with just one touch, he always needs to be one step ahead of his opponents and of course, also needs the technical ability.

In the images above, Wolf receives the ball with his back to the opposing goal and a defender tries to put pressure on him. With his first touch, a clever turn and his great acceleration, the Austrian can get rid of the opponent and start a counter-attack.

Furthermore, Wolf played on average 33.62 passes per game in this season and just 0.65 of them were long passes. He just likes to have little interplays with his teammates to open up the opposition like in the shot below. 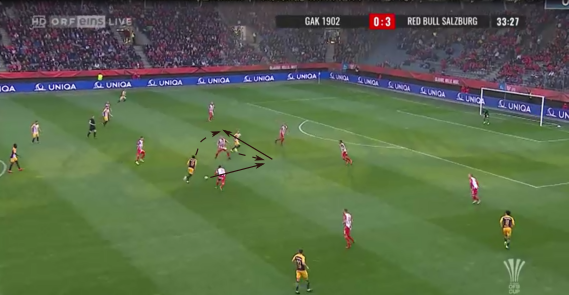 As already explained, Wolf is not just a midfielder with great abilities on the ball but is also a real threat to the opponent’s goal. In this season, he scored on average 0.41 times per game. That’s a good value for an offensive midfielder. However, it’s getting even more incredible, when you consider that is xG-value averages 0.26 per game. These statistics clearly show his calmness and shooting quality.  As already explained, he never seems to get hectic in front of goal. He often tries to place the ball in the far corner like in the shot below. 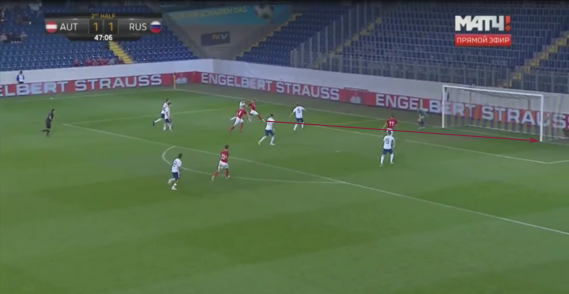 But in some situations, it’s not possible to simply place it next to the post. For example, when the goalkeeper is already in front of you or the angle is way too sharp. The Austrian also finds a solution for those situations and gets creative. This variability and his quality to implement these ideas, make him so dangerous.

Why RB Leipzig is the right team for him

After two good years in the Austrian Bundesliga, everyone expected Wolf to leave RB Salzburg during this summer transfer window. The question is now if it’s too early to join one of the best clubs of the Bundesliga and if RB Leipzig is the right club for him.

He was one of the best midfielders of the Austrian Bundesliga at the age of 19 and 20 respectively. A lot of people would argue, that the quality of the Austrian Bundesliga is much worse than the Bundesliga’s and that the transfer takes place too early. However, you have to consider that he also showed great performances in the Europa League against teams who are on the same level as clubs in the Bundesliga. Furthermore, he played well against his new club RB Leipzig in the group stage of this year’s Europa League and Salzburg won both times. In light of this, Wolf already has got the quality to play in the Bundesliga and needs new challenges, if he wants to keep developing his skills.

But is RB Leipzig the right team for him? The club from Eastern Germany has got a very similar philosophy to RB Salzburg. Both teams play very offensive-orientated football. RB Salzburg scored on 2.58 goals per game in this season and RB Leipzig’s value averages 1.78. In addition, the young German coach Julian Nagelsmann will take over RB Leipzig in this summer. His former team Hoffenheim was also well-known for attacking football combined with high pressing and counter-pressing. So, Wolf could be the perfect player to fit into Nagelsmann’s ideas of football.

This scout report showed, that Wolf has got the quality and potential to become one of the best Austrian midfielders of his generation. He has great abilities in almost every part of the football game. Although the young Austrian seems to fit into RB Leipzig’s and Nagelsmann’s ideas of football, it will be interesting to watch how often he’ll play and how he’ll perform in the new league. It’s possible that it will take some time until he gets used to his new club and environment.