After three fantastic seasons under Maurizio Sarri, Napoli changed their head coach this summer with the appointment of Carlo Ancelotti. The serial winner arrives in Naples with one objective; win the Serie A title which eluded Sarri. Sarri’s Napoli mesmerized fans with their playing style and broke their points record twice, but the all-conquering back-to-back-to-back-to-back double winners Juventus stopped Sarri from winning a trophy. Ancelotti’s task has therefore been set. He needs to overhaul Juventus to win Napoli’s first Serie A title, the Scudetto, in almost 30 years.

In this preview, I look at Napoli’s transfer activity and our tactical analysis looks at how Napoli might play.

Carlo Ancelotti is one of the most successful coaches in European football. He’s won league titles in England, Italy, Germany and France as well as the Champions League with AC Milan (twice) and Real Madrid. He also holds a Serie A title with Milan from 2004. With such a proven winner in charge Napoli hope they can finally win the Scudetto again. The worry is that Napoli’s success has been built on a very specific style of play and with Ancelotti being more man-manager than tactical mastermind I fear his players might not be as good as Sarri has made them look. Time will tell, but Ancelotti is normally very good at handling a first season after a very tactically demanding coach; note his first season at Bayern and his first in Madrid after Guardiola and Mourinho respectively.

Napoli’s sporting director Cristiano Giuntoli have had a quiet yet eventful transfer window. The main departure is, of course, Jorginho but the €57m fee has largely paid for the reinforcements to the squad. Pepe Reina has also left after a very good spell at San Paolo as has stalwart Christian Maggio.

Fabian Ruiz is the most expensive acquisition with Napoli paying €30m for the Spanish midfielder. The other big signing is Italian winger Simone Verdi who joins from Bologna for €25m. He will provide strong competition for Jose Callejon on the right. To replace Reina, as well as departing backup goalkeepers Rafael and Luigi Sepe, Giuntoli opted for highly-talented Udinese goalkeeper Alex Meret for €22m and another Udinese goalkeeper Orestis Karnezis at a tenth of Meret’s fee. With Meret immediately injured though, Karnezis will start the season in goal. Ajax German winger Amin Younes has joined on a free transfer and the unproven Brazilian striker Vinicius Morais comes from the Portuguese club Real SC.

Tactical Analysis: How will Napoli play?

With Sarri it was easy to anticipate how Napoli would play. They never changed their style regardless of their opponent or the stage. They kept playing their beautiful short-passing football out of their 4-3-3 while pressing relentlessly out of possession. With Ancelotti, however, it’s going to be tougher to predict. He is very adaptable and has no qualms about playing low and countering or taking the game to the opponent. Usually, he adapts to the side he takes over and therefore acts like football’s greatest “asset-manager”. He just tweaks a few things, works his man-management magic and tries to let things flow. It has often worked since he’s managed clubs with superb players, but it has also usually gotten worse after a season or two.

The 4-3-3 formation is set to remain as Ancelotti has kept the shape for his friendlies in charge. As you see in the image below, the full-backs are very attacking down the flanks while the midfield three and front-three is very narrow. 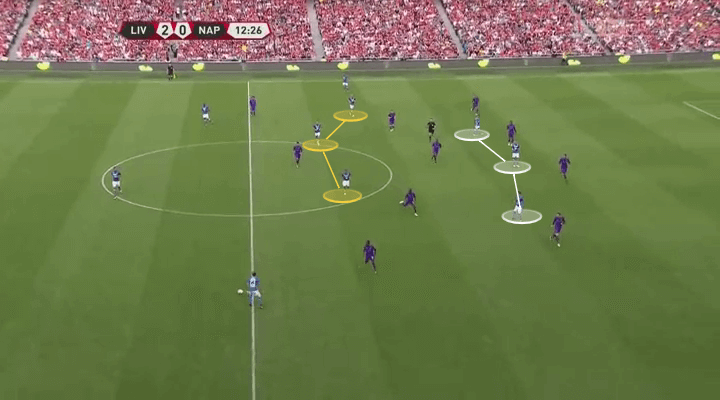 Napoli’s preference to keep the ball along the ground seems set to continue with Ancelotti, but there are worries that Sarri’s meticulous automatisms have been lost already. This will make Napoli more vulnerable as their possession play, especially in the 5-0 friendly defeat to Liverpool, hasn’t impressed. Below we see their starting positions. Marek Hamsik has been deployed as Jorginho’s replacement in defensive midfield. But with both full-backs bombing on like this it creates huge spaces for the opponent to counter-attack. Napoli repeatedly lost the ball against Liverpool and faced dangerous turnovers. It’s barely been a month, but Napoli already seem to miss Sarri’s meticulousness. 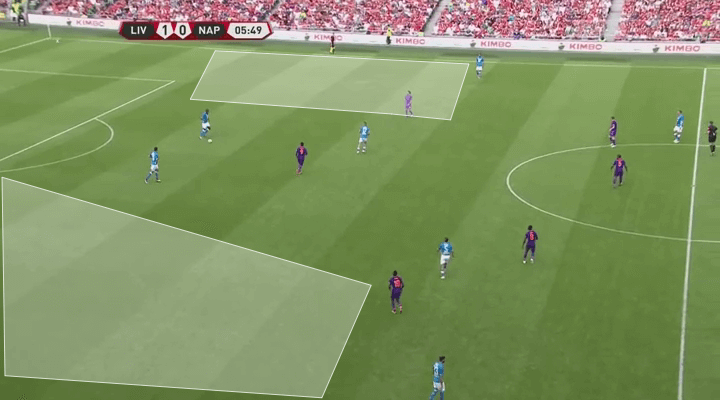 Here’s another example of how the Napoli players seem to have forgotten some of Sarri’s principles. Albiol plays a pass towards Milik who comes towards the ball. Last season Allan (yellow arrow) would have made a run to get the ball on the other side of his opponent. He then would have been an easy lay-off option for Milik and Napoli could have attacked a dangerous space. Now he didn’t, Milik had no options, lost the ball and Liverpool countered. Also look at every single Napoli midfielder; they’re all looking at Albiol and not one is looking ahead to the next action where Milik will receive. 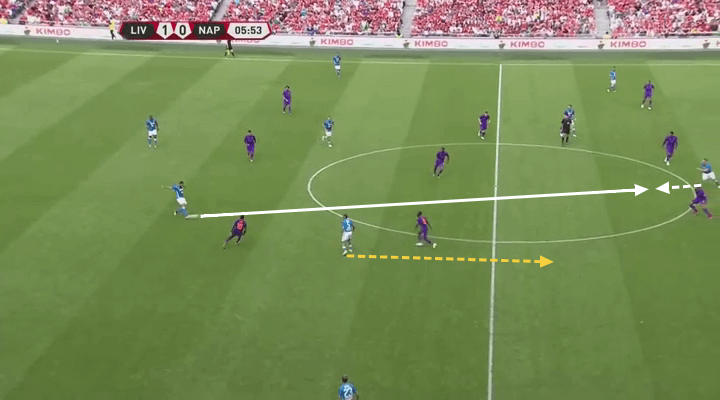 Unsurprisingly Ancelotti also seems willing to continue with the high-pressing of last season. The change has been a more man-orientated pressing compared to Sarri’s setup. Below we see how Napoli’s front-three and left-midfielder Ruiz press high with a direct opponent in mind and force a long ball from Liverpool’s goalkeeper. 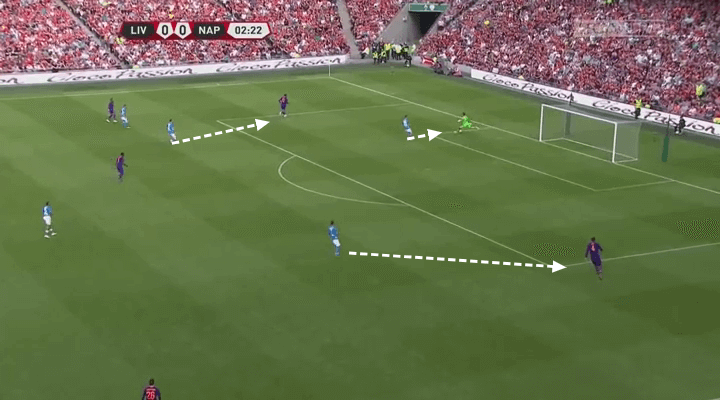 It’s early in Ancelotti’s tenure, but it seems there is uncertainty in how the players should act in some situations. The one below is telling. Callejon presses the centre-back Van Dijk but Allan also makes a pressing run towards the Dutchman. The defensive midfielder Hamsik also goes for his closest opponent and leaves a lot of space between the lines. With Allan in no man’s land and Hamsik out of position, it’s easy for Van Dijk to thread a pass through and Liverpool can attack 5 vs 4 against Napoli’s defence. This wouldn’t have happened with Sarri but hopefully, Ancelotti will get this right in time. 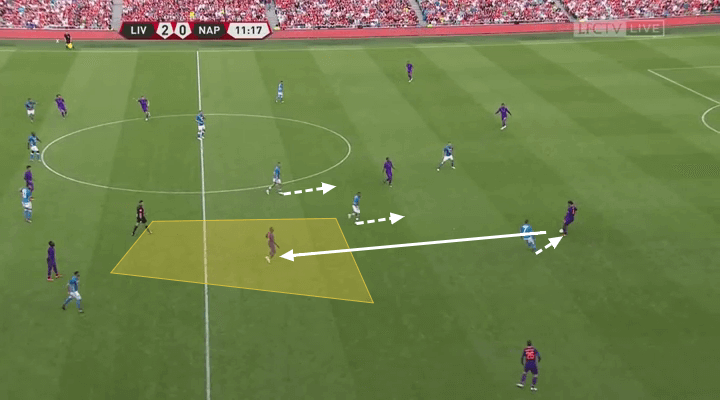 I think the line-up below will be Ancelotti’s mostly used eleven this season. The two main differences from last year are obviously in goal with Reina gone and in defensive midfield with Jorginho joining Sarri in London and Hamsik trying a new role. 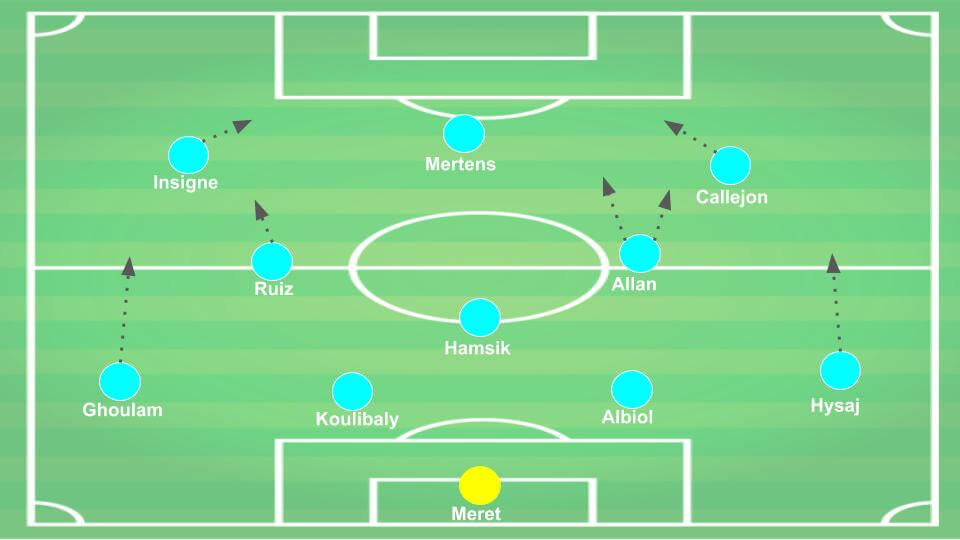 Alex Meret has been bought as first-choice and when fit he will start ahead of Karnezis. The back-four is certain when Faouzi Ghoulam is fully fit; until then Mario Rui will start on the left. The role of Hamsik in defensive midfield is intriguing and will be interesting to follow. He’s spent his entire career in attacking positions so he’s in for quite the change. He’s definitely good enough technically to succeed, but will he have the defensive mindset needed to control his team’s defensive play like Jorginho did?

Allan is a key player in this side and will start in front of Hamsik to the right. His main competition for the more combative role is probably the Croatian Marko Rog. Ruiz joins for a big price-tag but Piotr Zielinski is an excellent player so he has his work cut out to claim the starting spot. In attack, Lorenzo Insigne and Dries Mertens are certainties, but Callejon will be pushed close by Italian international Verdi. The left-footed dribbling and playmaking Verdi has a very different profile to Callejon so his arrival has opened up more flexibility for Ancelotti.

Napoli have a better squad than last year, but the loss of Jorginho will be harshly felt in defensive midfield. Reina’s experience will also be missed. Despite the squad having been strengthened I feel the eleven has weakened with Jorginho’s departure. Ruiz is comparable to Zielinski while Verdi is at a similar level to Callejon just with a different profile. The squad is good, but Juventus, Roma and Inter all have stronger squads and elevens. Ancelotti has his work cut out to make Napoli Serie A contenders.