After two seasons in the Bundesliga, RB Leipzig already ranks among the best clubs. The third season will be a special one though, since Hasenhüttl left the club and director of football, Ralf Rangnick, takes over as a head coach for one season. It is already certain that Julian Nagelsmann will supersede Rangnick one year later.

It is obvious that RB have well planned in a long-term, but does this also augur success in this season?

Ralf Rangnick is one of the most popular German football coaches.

The fact that he was responsible for the signing of new players and the creation of a club philosophy may be an advantage. Therefore Rangnick’s philosophy and Leipzig’s style of play coincide in many aspects.

First of all, Rangnick stands for high pressure defending with an enormous intensity.

Secondly, the German prefers to use transition phases to either regain possession or to take advantage of the opposition disorganization in order to create goal scoring opportunities.

In the following, we will point out how this philosophy fits to Leipzig’s approach.

In general, Leipzig’s style can be described as possession football.

According to squawka, RB had a possession rate of 53% in 2017/2018. However, their pass completion rate differs from sides with similar possession numbers. Leipzig has an accuracy of 80% in passing which is lower than the numbers of comparable teams such as Dortmund, Leverkusen, Gladbach and Hoffenheim. Furthermore, the average pass length with 17m is noticeably low. 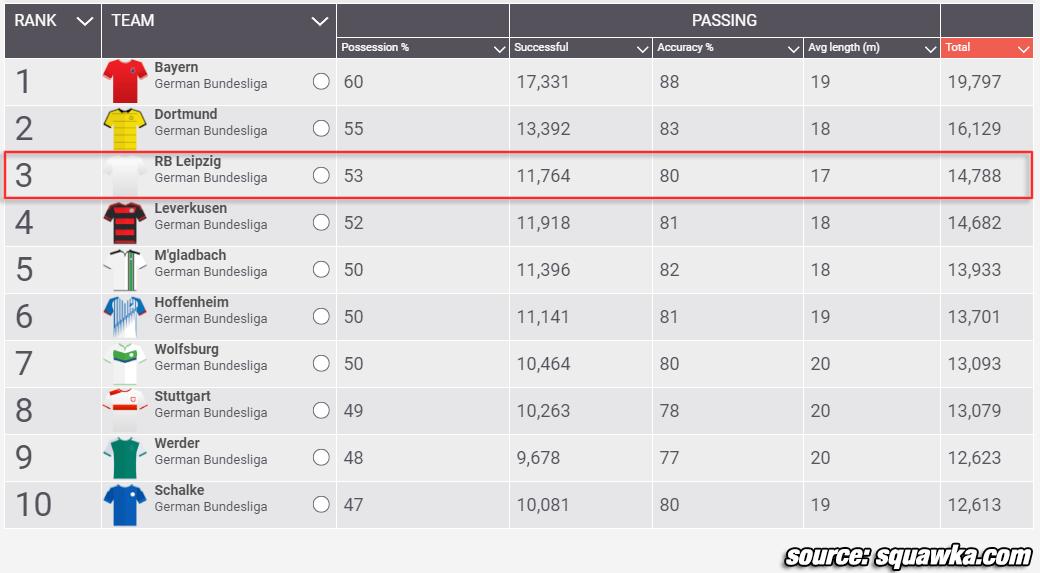 The following parapgraphs will give some indication of the reasons for these statistics.

In their offensive phase, Die Roten Bullen often heavily overload one wing. Thereby winger and full-back will be isolated on the far side of the ball. Leipzig searches for the quickest possible breakthrough, either in the overloaded area or after switching play. This causes the foregoing mentioned passing accuracy. A switch of play can bring the isolated winger into a good situation for a 1v1. That Leipzig was the Bundesliga team with the most dribbles in 2017/2018 underlines the significance of these situations for Leipzig’s attacking. 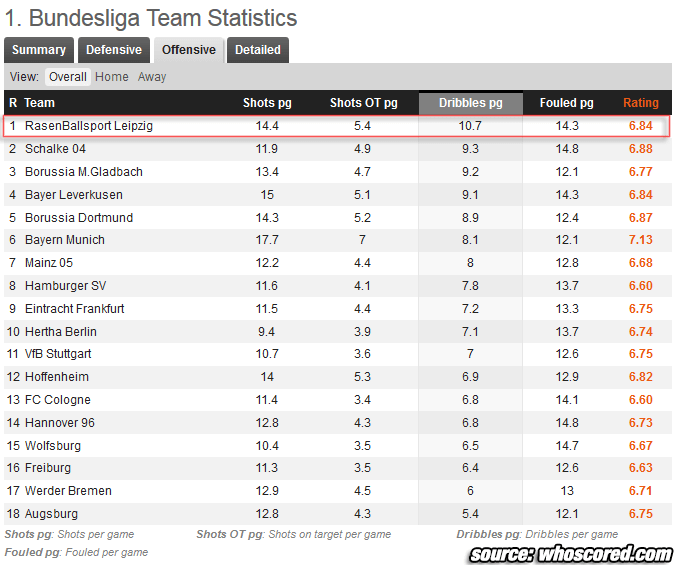 The overloaded areas enable Leipzig to quickly transition into a counter-pressing. That way they take advantage of the opponent’s disorganisation during the transition to the possession phase.

To prepare a promising counter-pressing situation, RB Leipzig overloads certain areas as mentioned above. Furthermore, they prefer short passes and only use longer passes to get into deeper areas rather than to switch sides. The intention lying behind this idea is that short passes enable counter-pressing situations as there are more teammates around to pressure the opposition. The statistics displayed earlier in this article prove that Leipzig use preferably short passes. 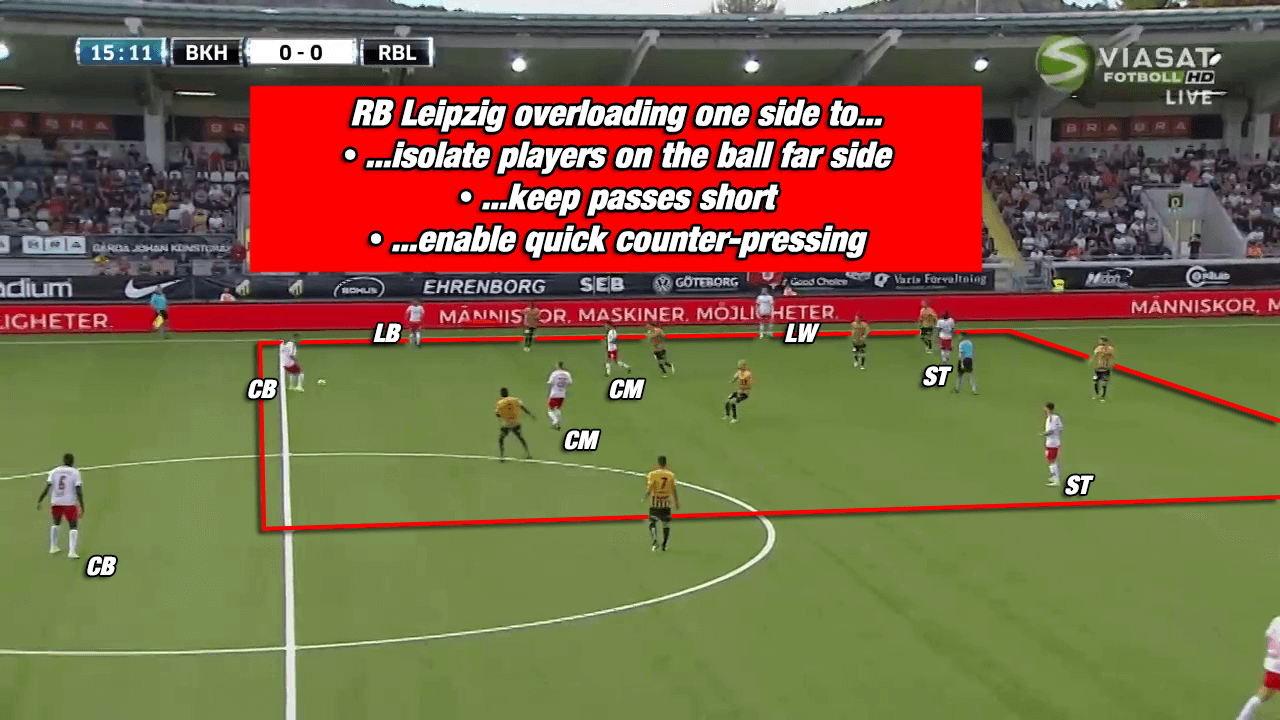 After regaining possession, Rangnick’s sides as well as last season’s Leipzig showed quick counter-attacks. Pacy players like Werner, Poulsen, Augustin and Bruma up front can use the space behind the last line of the opposition with deep runs especially when the opposition is unorganised.

In any situation the opposition is in control of the ball, Die Roten Bullen invite their opponent to play out wide with a compact center. Deploying a 4-4-2 formation which sometimes is described as a 4-2-2-2 because the wingers are set up offensive and centrally, Leipzig tries to close down all passing lanes into the center. Sometimes Leipzig uses a 4-3-3 formation against sides in a 4-2-3-1 system for a more man-oriented approach. No matter what, Rangnick will use a back-four which moves up high in a pressing situation. 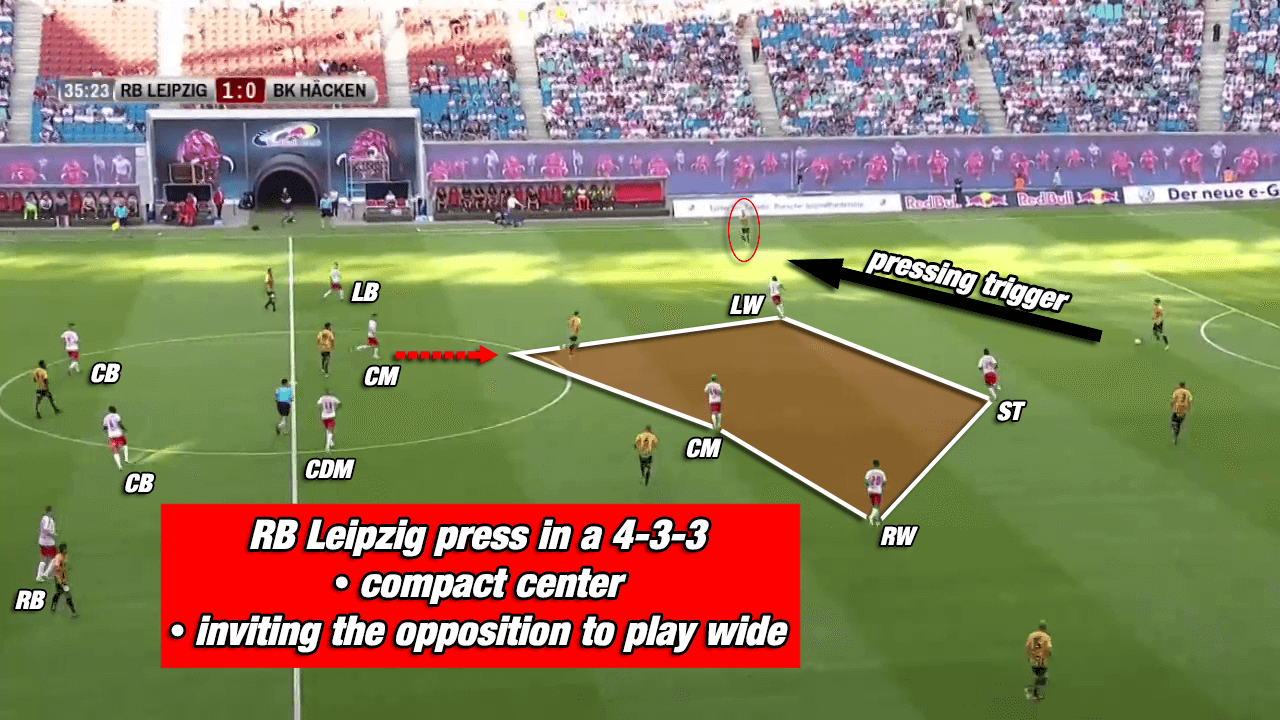 Sometimes the full-back on the ball near side even moves higher, leaving a back-three as the last line of defense.

Leipzig uses triggers to start pressing. Mostly press begins with a pass onto the wing. The horizontal pass to either of the full-backs is the pressing trigger of Leipzig. RB prevents the opponent from playing back into the center and press the full-back. Thereby they make use of the touchline which limits space and passing options. 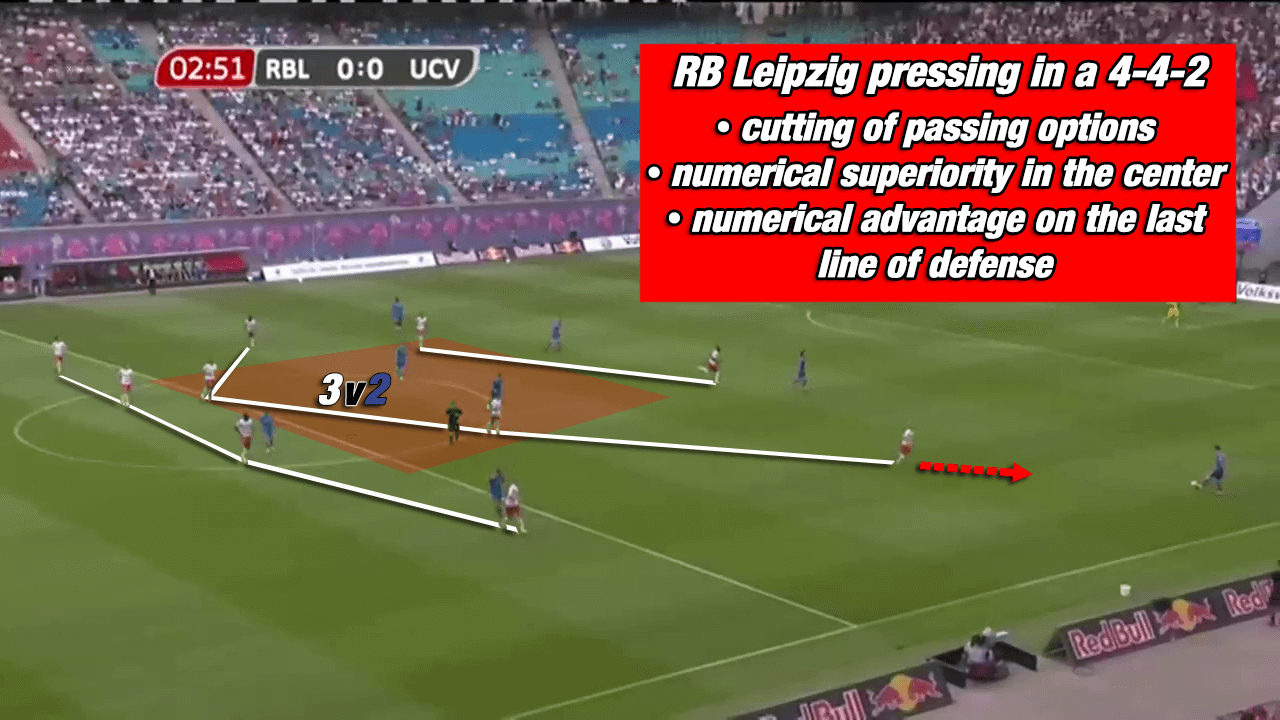 Furthermore the back-four will push high up the pitch to further reduce space. This increases the chance of winning the ball. However, it also raises the risk of being overplayed with a long ball. Leipzig tries to compensate this with fast defenders.

Emil Forsberg is the midfield strategist. The Swede played more than 2,000 minutes in 2017/2018. Forsberg is the creative part of their midfield. He can bypass and exploit open spaces in the center with his dribbling qualities and play through passes in the final third to assisst Poulsen and Werner.

Timo Werner is the best scorer with 13 goals in the last season. Since he likes to play short passes, he can participate in Leipzig’s short passing combinations and is a real threat for any opponent when it comes to counter-attacks.

Willi Orban takes over an important role as a captain, leading the young defense of Leipzig. With great tackles, he protects Leipzig from conceding goals when their press is overplayed. Moreover, his heading ability helps RB to defend crosses.

Not to forget, Die Roten Bullen still have Yussuf Poulsen, Kevin Kampl, Dayot Upamecano and the young attacker Augustin, who all made a major contribution to the recent success of the club.

To sum up, the team will be key, not single players.

The leaving of Naby Keita who signed a contract in Liverpool can easily be described as the biggest loss for Leipzig. The agile playmaker played a key role in the center of the Leipzig midfield. Especially in transition moments, he was able to use his pace as well as his ball-winning and dribbling ability. With a total of 67 take ons and a success rate of 58%, Keita ranked among the best offensive players as a central-midfielder in the Bundesliga season 2017/2018.

RB Leipzig did not even try to replace Keita. Instead they signed several young talents such as Matheus Cunha (striker, 19), Nordi Mukiele (centre-back/right-back, 20) and Marcelo Saracchi (left-back, 20). Leipzig focus on instructing young, promising players. Something which can pay off in the near future.

RB Leipzig won’t change much in their style of play. They can benefit from sustainability in the squad and a head coach with Leipzig background. Therefore, Rangnick can focus on optimizing patterns rather than building up something new like Kovac and Favre as competitors on the Champions League slots will have to do.

RB Leipzig’s path is also interesting as they go their own way and sign talents rather than players that already established themselves on the international football stage. This ensures sustainability and possibly long-term success as well.