When rumours first broke of Marcelo Bielsa potentially heading to Leeds, I was filled with intrigue – would Bielsa take a job in the second division? How would his philosophy translate to a team that will most likely be worse technically than his previous teams? How will the players cope with Bielsa’s high pressing system over a 46 game season? Considering Leed’s recent history with managers, will he last longer than Christmas?

When it was officially announced that Marcelo Bielsa would indeed be taking over at Leeds, it sent a message to the rest of the world, that Leeds were aiming to restore their place in the Premier League, which has eluded them for the last 14 years – and they wanted to do it in style.

Leeds dipped into the transfer market, strengthening their squad with some impressive additions, including young talents Jack Harrison (from Man City) and Lewis Baker (Chelsea) on loan and the addition of one the best players in the Championship last season in Wolves’ Barry Douglas.

Pre-season followed, which was a rollercoaster of results as Bielsa instilled his philosophy into the team, starting with a narrow 2-1 victory over League 2 side Forest Green Rovers, followed by 1-1 draws against York City and Southend before a couple of seven-goal thrillers – a 4-3 defeat by Oxford City and a 4-3 victory over Guiseley. Las Palmas provided the last friendly and some stiff competition, in which Leeds ran out victors, winning 1-0.

Bielsa’s first game in charge was to be a baptism of fire, against newly relegated (and bookies favourites for promotion) Stoke City. 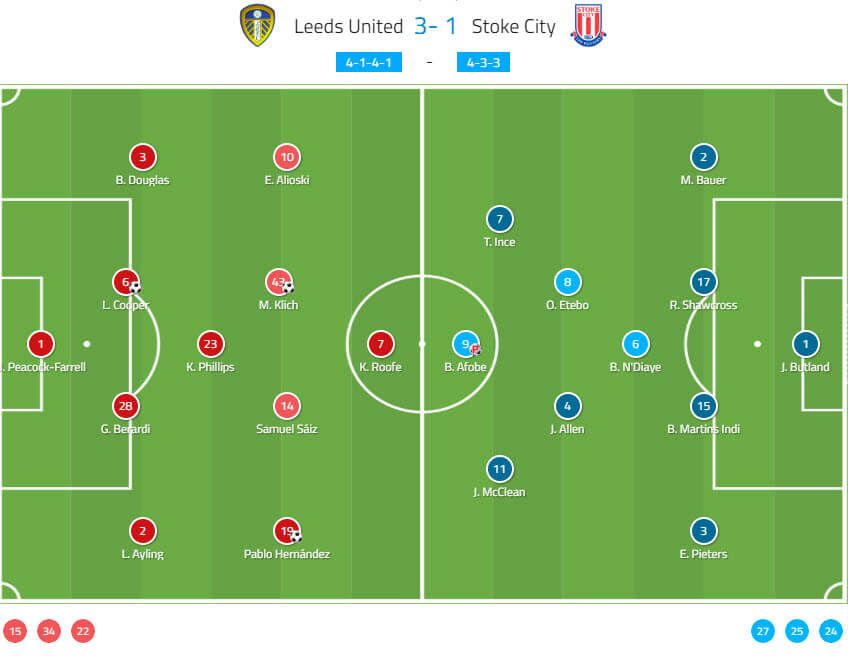 Marcelo Bielsa lined his Leeds team up in a 4-1-4-1 formation for his debut game, with new signing Barry Douglas the only one of the new signings to start the match. Douglas was joined in defence with the centre-back pairing of Gaetano Berardi and Liam Cooper with Luke Ayling at right full-back.

Defensive midfield duties went to youngster Kalvin Phillips, who, aged just 22, has already started 64 championship games. Partnering him in central midfield was Mateusz Klich and Samuel Saiz. They were joined by Pablo Hernandez and Egzijan Alioski on the wings with Kemar Roofe leading the line in attack.

It’s no wonder that Gary Rowett’s Stoke are the bookies’ favourites for promotion when looking at this squad, with an incredible 963 Premier League starts between the Stoke starting lineup. It had eluded me over the summer (I blame the World Cup!) just how many of their players they’ve kept from last season’s disappointing Premier League campaign, which combined with some new signings like Tom Ince, Benik Afobe, Oghenekaro Etebo and James McClean is quite the squad for the Championship.

During the first half, it had become clear that the Leeds squad have already taken to Bielsa’s philosophy with numerous passages of play in the Stoke final third that were a joy to watch. However, such moments often did not start in the final third and were instead generated from defence, with Leeds often playing out the back with confidence and finesse.

In the above picture we see Berardi receive the ball from the goalkeeper whilst under pressure from two Stoke players, instantly his team-mates move back into a position where they can receive the ball, Berardi manages to find the Ayling on the right who quickly plays the ball into midfield which results in a cross into the Stoke box just 15 seconds after the goalkeeper played the pass.

These quick transitions were a focal point of Leeds play, and resulted in the first goal of the match – just 15 minutes into the match and may very well be the Championships team goal of the season. There’s too much happening to break it down individually or via pictures, so enjoy this clip of the goal and the build-up instead.


This quick transition play was helped by the way Leeds retained possession, Bielsa’s philosophy has played an important part in many fantastic manager’s (such as Guardiola and Pochettino as two examples) philosophies, so it’s unsurprising to see Leeds forming triangles all over the pitch when in possession, as demonstrated perfectly by the picture below.

Despite a few balls being launched up the pitch in situations where players had a better shorter pass on, Bielsa’s Leeds created a number of chances in the first half, which were the epitome of his philosophy and they found themselves 2-0 up on the stroke of half-time after another well-worked move that I’ll now break down.

The first is the pass from Peacock-Farrell, which breaks the first line of the Stoke defence, instantly taking two players out the equation.

Finding himself in plenty of space, he has time to pick the right pass, which he launches accurately down the left-wing (to another Leeds player in plenty of space). The receiving player lays it off with his first touch to Alioski

Alioski, under pressure, plays the ball into Pablo Hernandez, who finds himself in space before rifling the ball past Butland from the edge of the area. It’s simple football, but in the space of four passes, Leeds have gone from the goalkeeper passing the ball out from the back to having the ball in the back of the net.

Whilst Leeds looked nowhere nearly as impressive in the second half, I have a feeling that was done on purpose. With Leeds leading 2-0 at half-time, it was the perfect time for Leeds to master the defensive aspect of Bielsa’s philosophy. The change in approach was noticeable, with Leeds going from having 57% of the ball in the first half, which dropped down to 42% for the second half (51% overall), but the Leeds players coped well (conceding from a penalty) with the demands of Bielsa’s system.

An energetic one-man press was primarily used, with the nearest player to the opponent on the ball pressing at speed, if the Stoke player managed to get the pass away, then the pressing player would drop back into position whilst another play would press. If the pass was a very short one (<10m) or a bad touch was taken then both players would try to win the ball back as a combined effort, before quickly dropping back into position.

Above is a good example, we see the Leeds player chasing down the Stoke player about to receive the ball, whilst the other Leeds player positions himself in between the two available options (the other passing options are being man-marked). The pass is played back to one of the players in space, triggering the secondary Leeds press. Bielsa must be encouraged from his team’s display as to how quickly they seem to have picked up his philosophy.

A fascinating game seeing Bielsa’s philosophy distilled into the Championship and has answered many of my questions that I opened this article with. I do, however, still have concerns about whether the pressing style will simply be too much for a team with so many games to play (especially if Leeds have a decent run in a cup) which will surely need a large amount of rotation of players. That being said, Leeds ran out winners without many of their new signings (Jack Harrison and Lewis Baker came on in the 89th and 88th minute whilst Patrick Bamford didn’t play a single minute), so it’s obvious that they do have the depth and quality to win matches without what is perhaps their strongest team.

It’ll be interesting to see how Bielsa fares in his next game, as a managerial legend takes on a legendary player turned manager in Frank Lampard’s Derby.

Like this article? Read more from Stuart Reid such as how Marco Silva will fare at Everton or England’s Use of Set-Pieces at the World Cup.