Tactical Revolution does NOT include Rafa’s Newcastle

Moneyball has become a general term in sports that describes using data to find an undervalued edge that can be exploited into a competitive advantage. Eventually, the rest of the league catches up making the edge no longer undervalued. Off the pitch we see Moneyball play out in player valuation. An academy player from Valencia CF will cost more than an academy player from Vancouver. Teams scour the data for undervalued leagues and players to gain an edge over the competition.

On the field, we are seeing Moneyball play out in the assigning value to shots and recruiting or coaching in order to maximise the value of each possession in getting a high-value shot. As I wrote previously, Premier League Moneyball, we are in the midst of a tactical revolution based on minimising low-value shots. This revolution does not include Rafa’s Newcastle United.

13 of 20 Premier League teams took less than 40% of their shots from outside the box last season. This is the clear trend in football. One team not onboard with the revolution is Rafa Benitez’s Newcastle United. 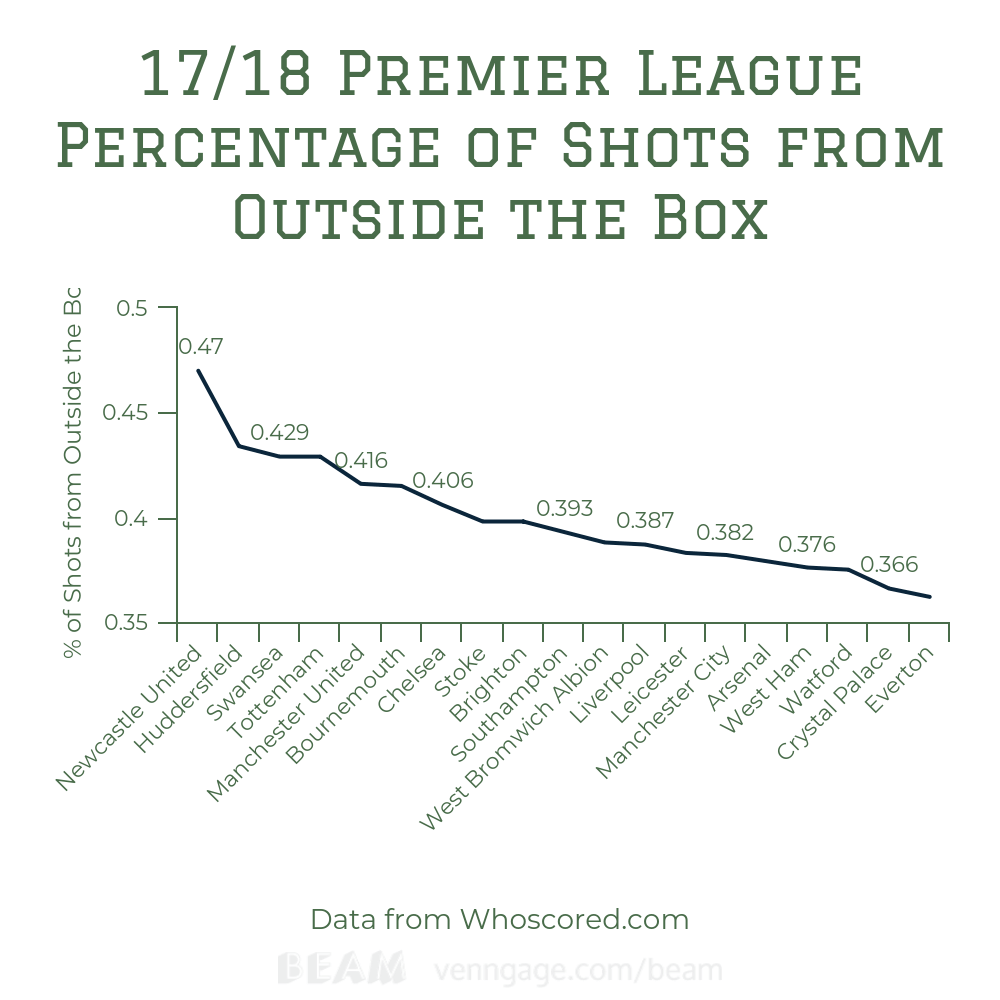 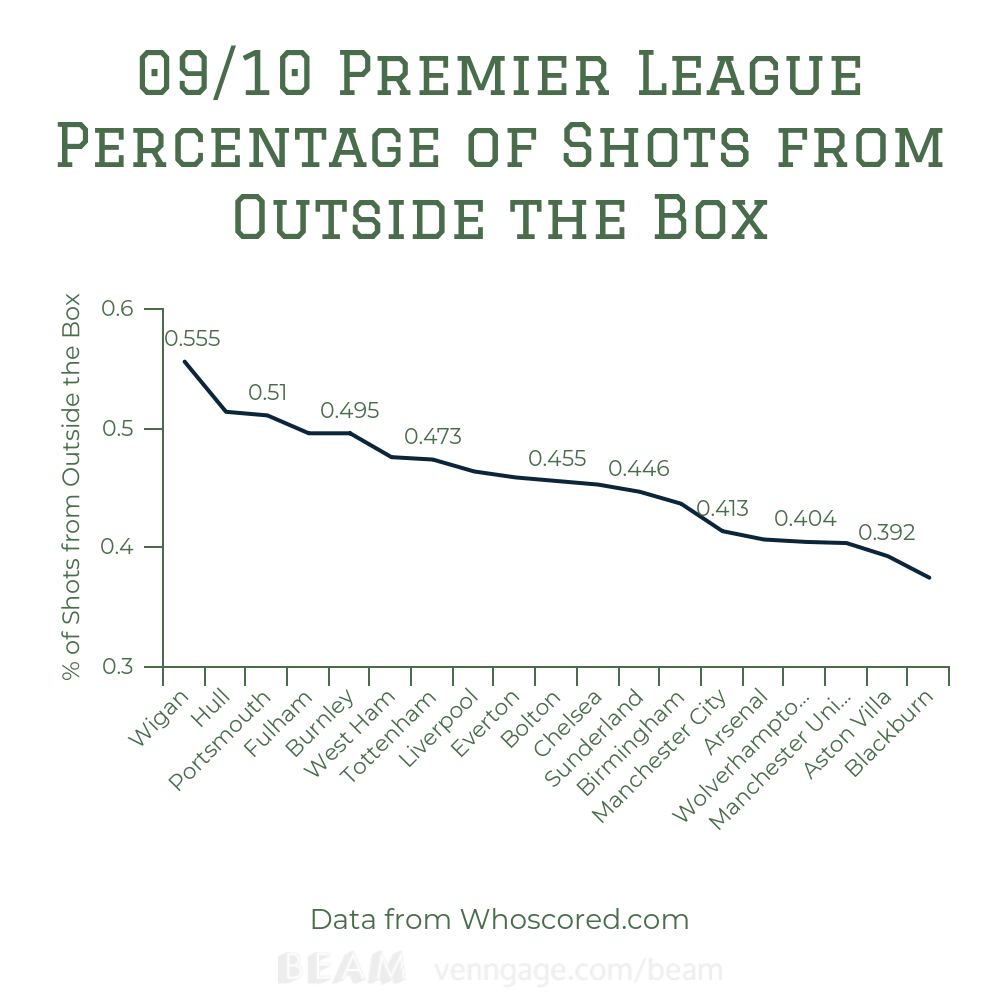 The chart above shows the percentage of shots taken from outside the box in the 09-10 Premier League season. Rafa’s 17-18 Newcastle has a shooting profile that looks more at home in the 09-10 season than 17-18. 09-10 teams with a similar shooting outside the penalty area profiles include Tottenham under Harry Redknapp, West Ham under Gianfranco Zola and Liverpool under….Rafa Benitez. 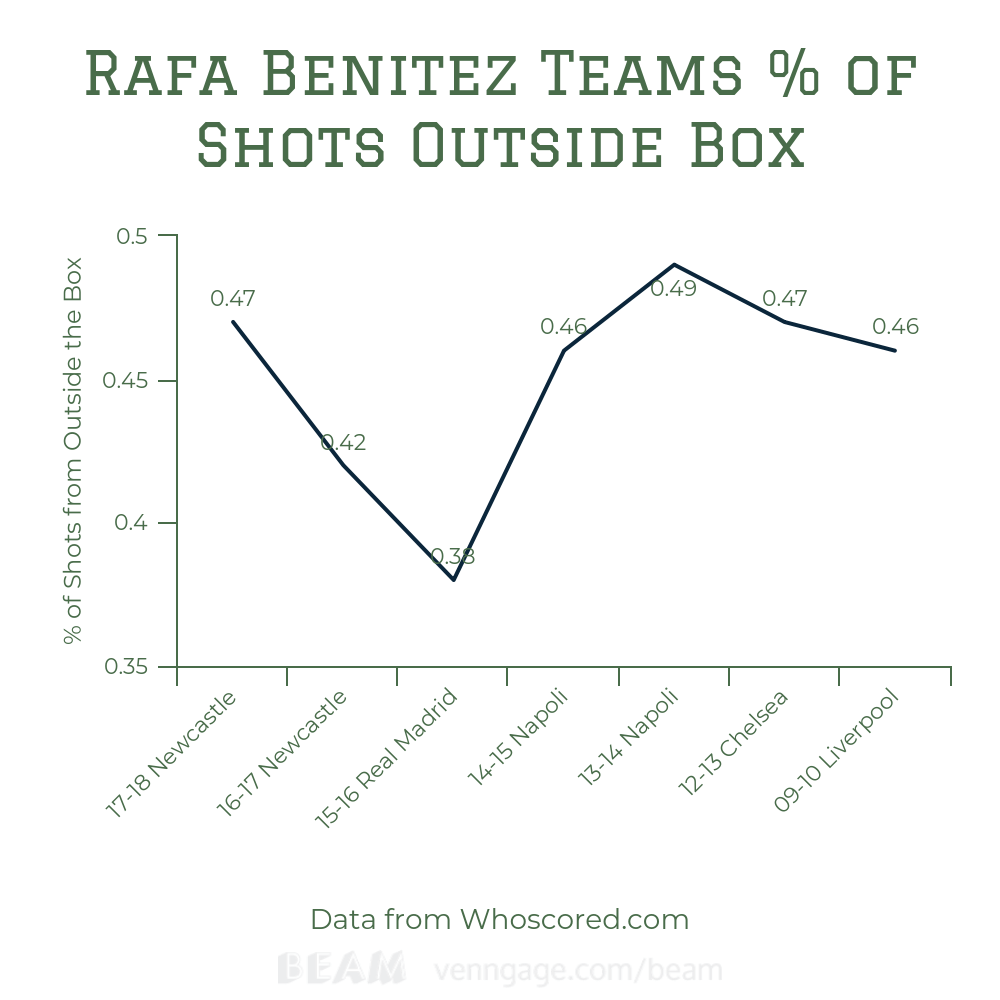 Above we see Rafa’s outside the box shooting percentages going back to Liverpool 09-10 season. They are fairly consistent with the exception of Real Madrid 15-16 season. It appears that a Rafa team is a Rafa team with zero changes being done on the field in terms of focus on high-value shots. The lone exception I chock up to the talent disparity at Real Madrid in 15-16.

Jonjo Shelvey. The menacing midfielder. His reputation precedes him as his name invokes images of rash retaliations and cards. When I hear his name I instantly picture lashing a shot from deep wreaking havoc on spectators in row ZZ! 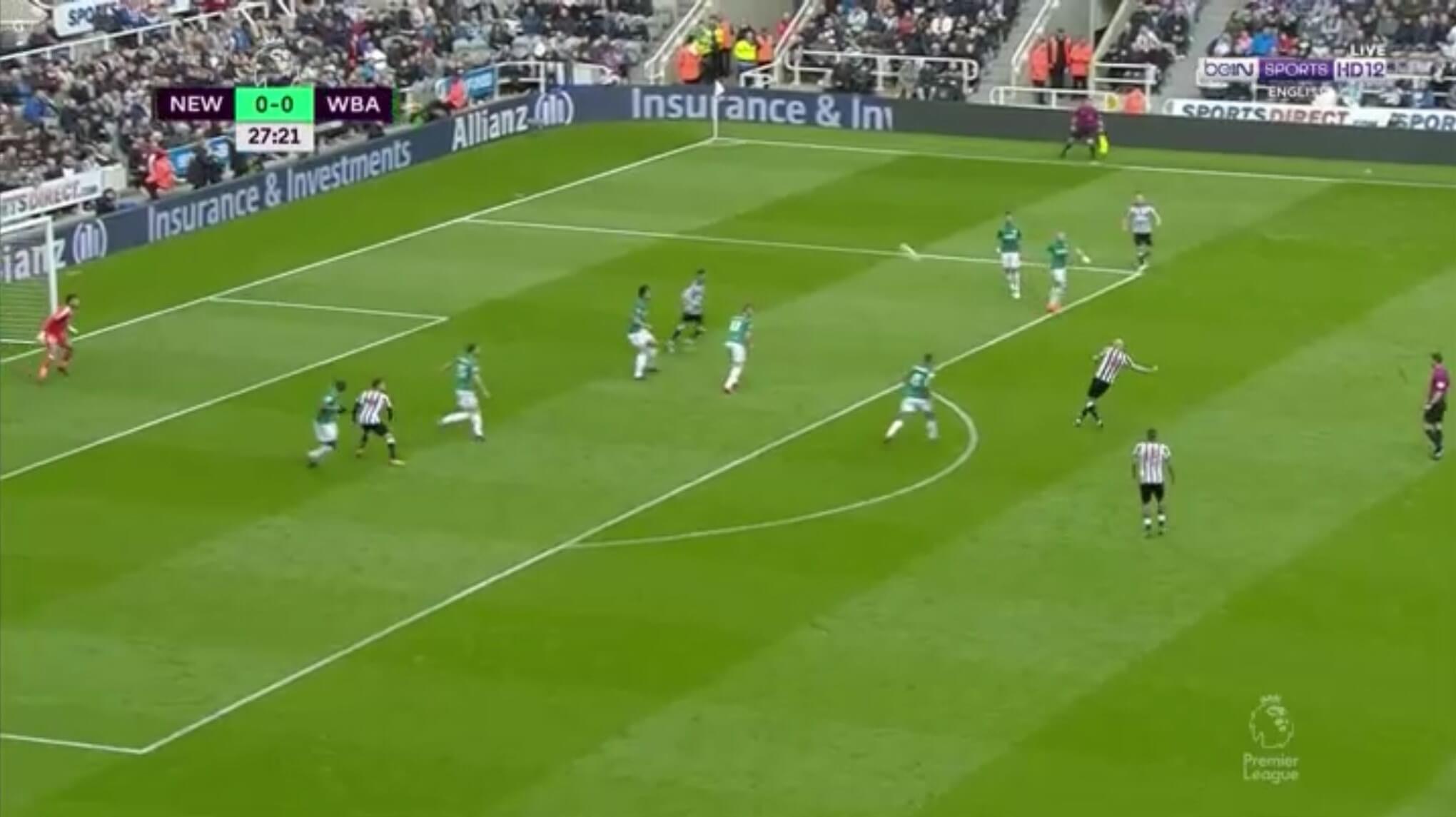 Last season Jonjo scored 1 goal while taking 42 shots. That is an abysmal ratio. Add in the fact that only 9 shots were on target! 37 of Jonjo’s 42 shots came from outside the penalty area for an astounding 88%. If a majority of teams take less than 40% of their shots from outside the box then Jonjo’s 88% is a crazy outlier.

Next, let’s look at the Championship season for Jonjo. In 16-17 he pitched in 5 goals on 93 shots which is a bit more respectable but still inefficient ratio. He took 77 shots from outside the box which is 83% of his total shots. Still a crazy outlier in shot selection.

Matt Ritchie, please raise your hand. It was fitting that the first Newcastle shot of the season was Matt Ritchie taking an off-balance shot from outside the box that ended up in the supporters’ section. 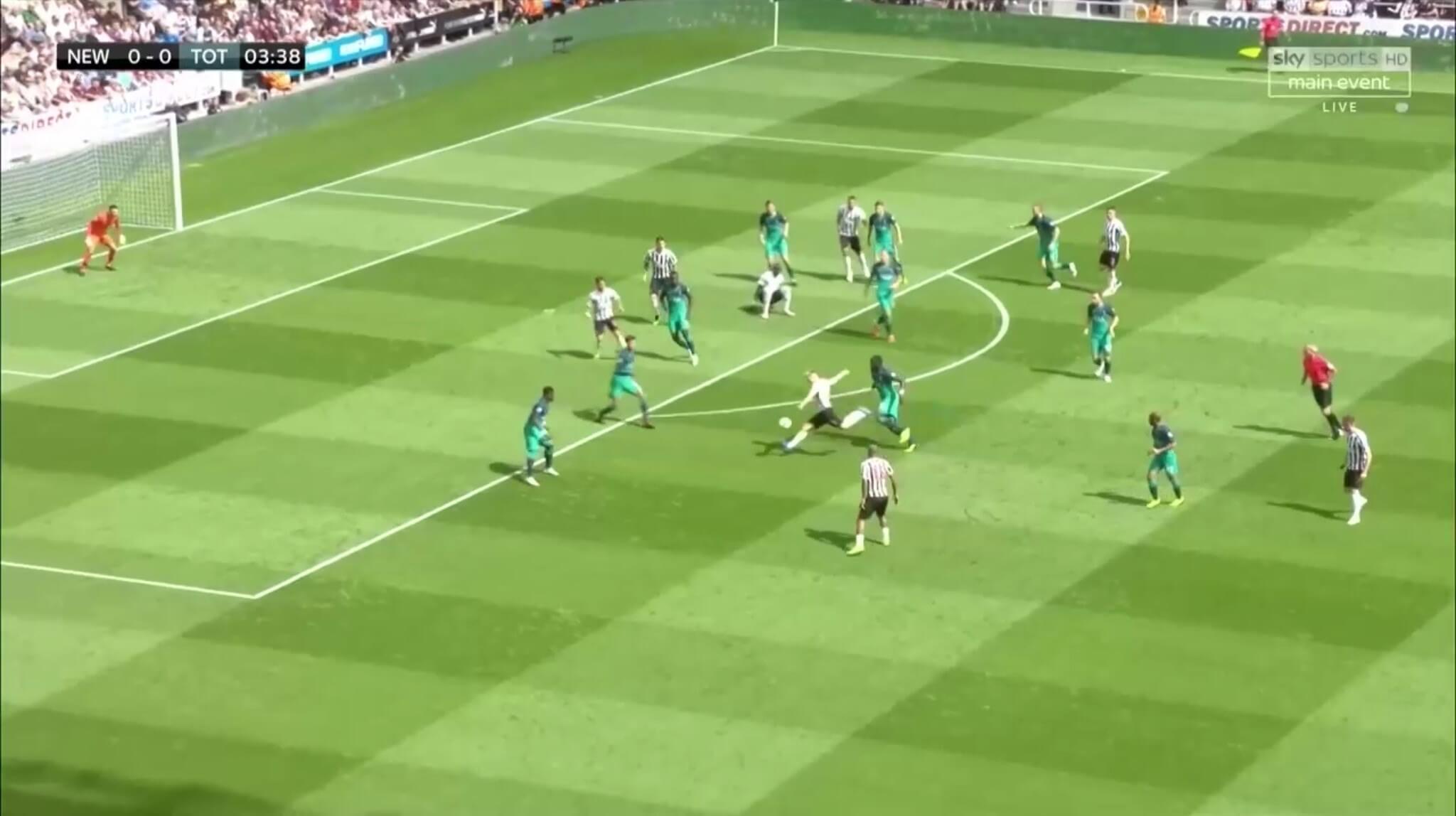 Last season Matt Ritchie scored 3 goals on 59 shots. He was second on the team in shots with 1 less than Ayoze Perez. 42 of his 59 shots came from outside the box for a percentage of 71%. Matt Ritchie is not quite up to Jonjo’s level of inefficiency but he is close.

Newcastle without Jonjo and Matt Richie

Let’s drop Jonjo and Ritchie’s stats and Newcastle’s numbers look much more in line with their peers. The percentage of shots from outside the box would be a respectable 38%. That would put Newcastle as the 9th most selective team in terms of getting shots inside the penalty area. That would be a marked improvement and put Newcastle in line with their peers in terms of exploiting the competitive advantage.

What should the duo do instead of shooting from distance?

It is obvious that Rafa is going to play Matt Ritchie and Jonjo heavy minutes this season as they are key components to the squad as evidence by Ritchie’s perfect cross for Newcastle’s goal against Tottenham.

Jonjo last season scored on 2% of his shots from distance which is awful. Instead of blasting the hero shot his team would be better served with him finding a better option, a more dangerous option.

Ritchie last year scored on 5% of his shots from distance. I repeat, instead of blasting the hero shot his team would be better served with him finding a better option, a more dangerous option.

They must look past the bombing 2%-5% goal chances and embrace that data.

Let’s look again at the opening shot of Newcastle’s season where Ritchie lashes the ball into the stands.

The above is a low percentage chance. Instead could the attack-minded player roll the ball in for one of the forwards standing along the offside line? 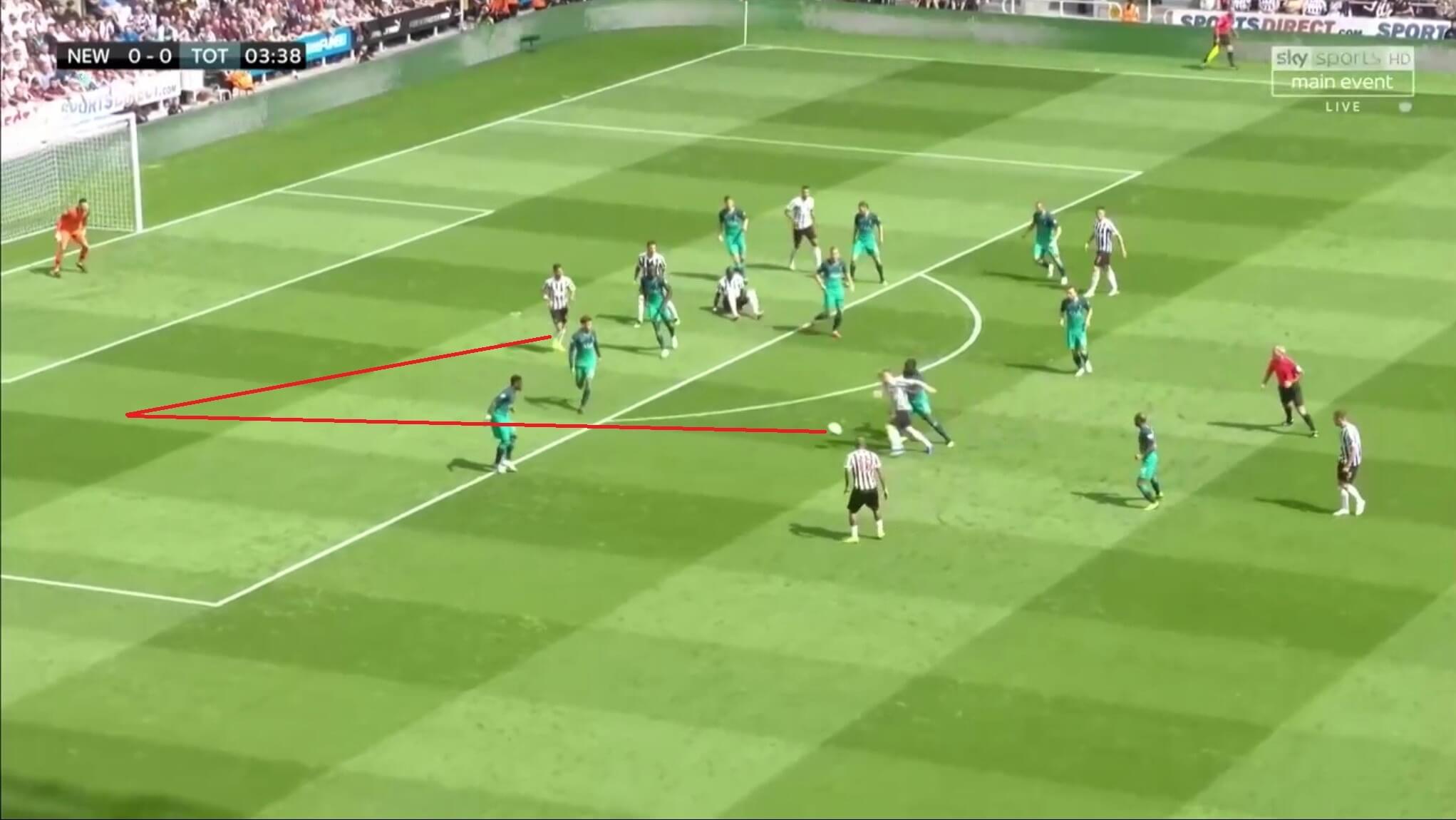 This dangerous option if completed would provide Newcastle with an outstanding inside the box option. If that completed pass leads to a 15% scoring chance for the forward then Ritchie only needs to complete the pass 20% or more of the time for the data to tell us that the pass is the better option. If he can complete the pass 40% of the time then the passing option is 2x better than shooting. And a 60% completion rate would provide a 3x better option. For a player of Ritchie’s calibre, he should be expected to complete that pass at least 20% of the time!

The data says that Newcastle could improve the quality of their chances through Jonjo and Ritchie making better decisions and not giving up on the play through a wild hero shot. The data also says that Rafa is not onboard the high-value shot train. Historically last season’s Newcastle team mirrors a majority of Rafa teams. Do not expect Jonjo or Ritchie to change their ways despite it being an easy path to more and better goal scoring chances.