The first matchday of the English Premier League season saw an intriguing match with the champions Manchester City travelling to the Emirates to face a much-changed Arsenal side under new management for the first time in 22 years. With the Spaniard Unai Emery now in place as head coach of Arsenal, there was a sense of anticipation as fans looked to see what the new-look side would look like in terms of playing style.

There was a contrast between the two sides in terms of their summer recruitment as well with Manchester City having only signed the Algerian wide player Riyad Mahrez from Leicester City. Arsenal, on the other hand, had moved to significantly strengthen both their midfield and defence with the likes of Lucas Torreira and Sokratis in particular signed to provide an element of steel to the Arsenal spine.

Despite the lack of new arrivals for Manchester City this off-season, there is still a great deal of excitement around the club after their record-breaking season last time around. This is also the third season in charge for Spanish coach Pep Guardiola, he spent three seasons at Bayern Munich prior to joining City and it was in the third and final season in Germany that we saw his team play at their absolute peak with his ideas and tactical ideology firmly in place. If that cycle repeats itself at City, then we are in for an incredible season of football. 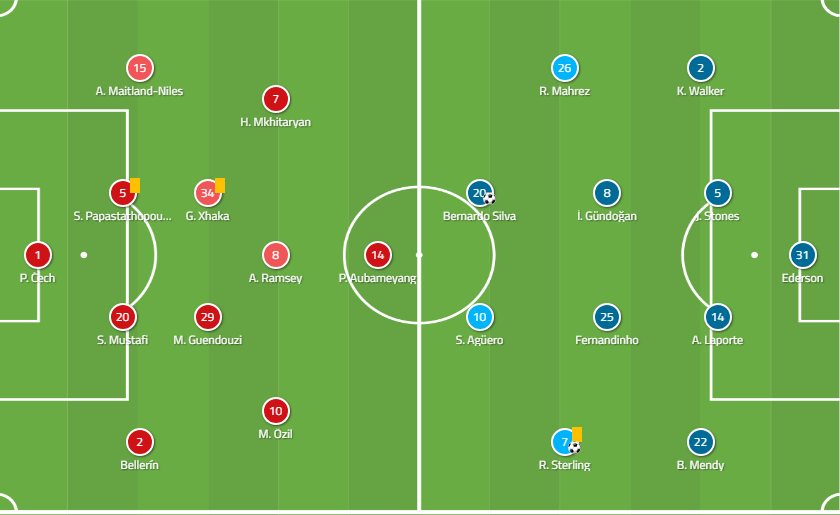 The team news was interesting in that of the summer arrivals at Arsenal only Sokratis and the French midfielder Matteo Guendouzi played from the start with the young midfielder being preferred to the Uruguayan international Lucas Torreira, it is likely that when the Uruguayan is fully fit, he will start in the Arsenal midfield. At left-back, Emery also gave a chance to the young academy prospect Ainsley Maitland-Niles.

Riyad Mahrez did start the match on the right for Manchester City with England star Raheem Sterling on the left and the German international Leroy Sane consigned to a place on the bench.

The normally-reliable team graphic taken from Wyscout had City playing a 4-4-2 with Bernardo Silva partnering Sergio Aguero in the attack, the Portuguese international actually played as an ‘8’ alongside Ilkay Gundogan with Kevin De Bruyne and David Silva still making their way back to full fitness following the World Cup.

If you are looking to understand why the Wyscout team had the City shape down as a 4-4-2 then all that you have to do is look at their team structure in the defensive phase.

When out of possession in the immediate transition into the defensive phase, Bernardo Silva would move forward to press the ball alongside Sergio Aguero as Ilkay Gundogan drops deeper beside Fernandinho in the centre of the midfield. This turns the defensive shape into a 4-4-2 with the wide attackers also tucking into the midfield line. 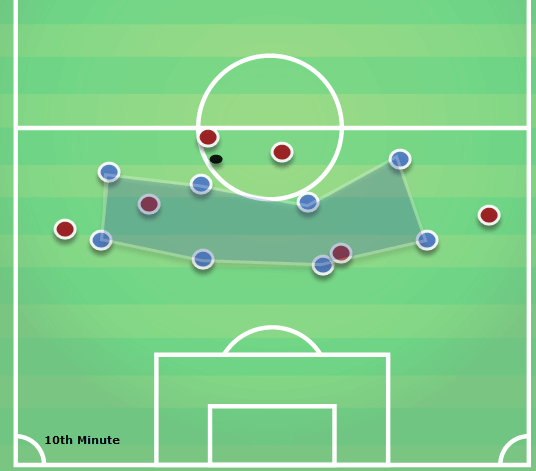 Here, I have shown the defensive shape from City with two lines of four (midfield and defence) as Arsenal have possession of the ball just inside the Manchester City half. The key to this defensive structure lies in the compact space between the two lines of four as Guardiola remains intent on playing with a high defensive line this, in essence, squeezes the space between the defence and midfield and prevents the opposition from finding pockets of space in which they can play between the lines.

It is the pace of the City back four (Walker, Stones, Laporte and Mendy) that allows City to press this high along with the high positioning of Ederson in the City goal that makes the opposition think twice about playing passes long in behind the defensive block.

Whilst Arsenal have players out wide looking to stretch the defensive block, City are still comfortable in this with the expectation that any diagonal switches to the wide players would be contained by the full-backs (Walker and Mendy) who have the pace to close the space down extremely quickly. 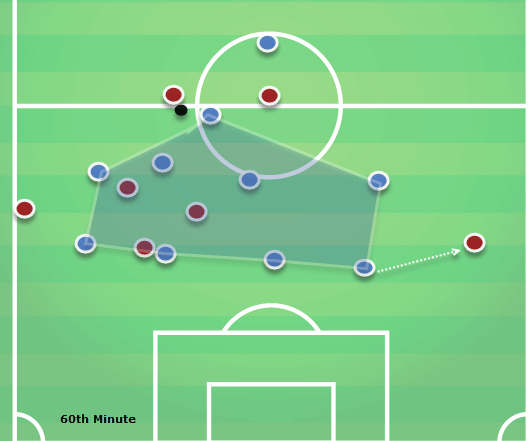 This time we see the defensive organisation from City in a more established defensive phase of play. As well as the two banks of four we also see midfielder Bernardo Silva dropping back into a more defensive position to add numbers and depth to the defensive block.

Again, we can see that there are no easy passing lanes for Arsenal to play into the final third and as such, the only route for the home side to progress the ball into that zone comes with a diagonal pass out to the left winger. A pass that is quickly identified with Kyle Walker able to not only move out and engage the man receiving the ball but also to cut the pass out before it reaches the man.

Guardiola is, however, famous as a coach for his constant progression in terms of playing style as he works tirelessly on the training field to prevent his teams from becoming passive and predictable in the way that they play.

In this match, the key in the attacking structure came in the very different movement and positioning of Kyle Walker and Benjamin Mendy in the full-back positions. 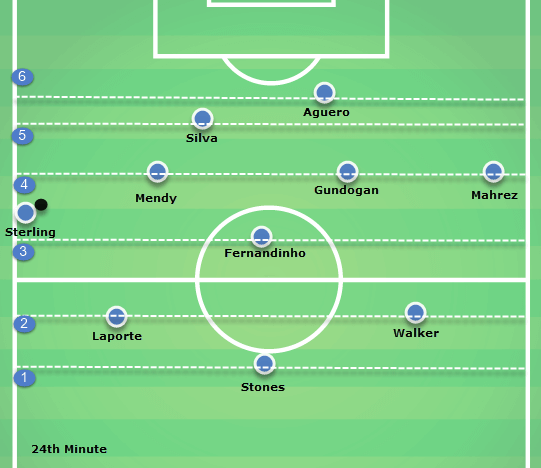 Here, we see an example of the shape and structure that Manchester City took when in possession of the ball. The two full-backs both move from the wide areas into a more central position but they did so at hugely different heights of the field. Walker dropped from the right into a position in the half-space where he formed a chain of three defenders whilst Mendy moved inside into a more advanced position.

The movement from Mendy is not necessarily anything new with Guardiola using David Alaba in this inverted role whilst at Bayern Munich and Fabian Delph performing a similar function for City last season. With Delph, however, he would drop into the same line as Fernandinho as the holding midfielder, in this match, the positioning of Mendy was more advanced on the same line as the next midfielder where his power and direct running in possession of the ball caused havoc for the Arsenal defence.

In possession of the ball, City essentially took up six lines at different depths of the pitch. The central midfielders themselves were staggered on three lines making it difficult for the Arsenal defensive block to contain their movement and cut off passing lanes. 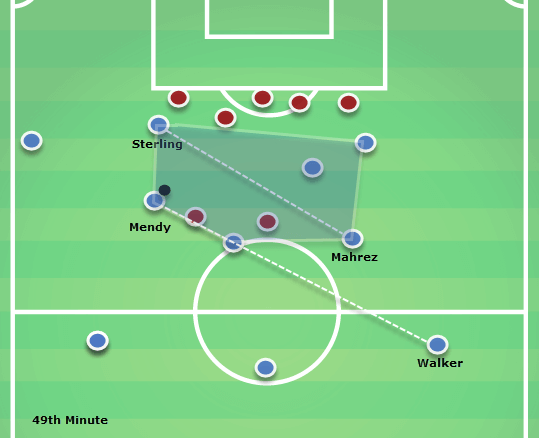 Another interesting aspect of the attacking structure from City in this match was their preference to take up positions within the width of the Arsenal penalty area. The wingers and full-backs pivoted around with the ball near wide player going high and the ball far wide player taking up a deeper position, in this example, the wide player is actually Sergio Aguero.

These positional switches in the final third were designed again to make it difficult for the opposition to effectively mark the City attacking players.

As touched upon above the performance in the attacking phase of the French international full-back Benjamin Mendy was one of the keys to the Manchester City victory in this match. His intelligence in terms of positioning and understanding when to hold the depth and when to go high were essential in the way that City created space in and around the Arsenal penalty area.

With Raheem Sterling positioned wide on the left side, there was always a danger to Arsenal that the wide player would look to make diagonal runs in towards the penalty area on to his stronger right foot. 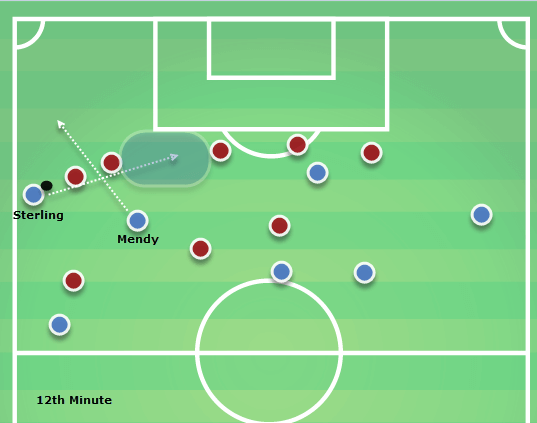 Here, we see an example of the intelligent movement from Mendy and Sterling in order to create space. With Sterling in possession of the ball wide on the left side, the expectation from Arsenal would have been for the England international to look to attack down the left flank where space was free to be exploited.

The biggest takeaway from this match was that Arsenal and Unai Emery have a lot of work to do if they want to challenge for top four this season. There were definite positives and Arsenal probably deserved to have scored at least one goal. Their defensive performance and attempts to build up in possession left a lot to be desired.

Manchester City, on the other hand, has shown that they have another level to reach in terms of performance, even from the heights of last season, Guardiola has again shown his ability to improve players and add parts to their game that others would not have even considered.

If you enjoyed this piece then take a look at our look at how Manchester City can evolve this coming season and my look at Sevilla under their new coach Pablo Machin.