Lazio were exciting to watch in last season’s Serie A and 2018/19 looks set to be no different. An interesting transfer window has allowed optimism to flow once again. The devastation of losing fourth place in the final minutes of the season can possibly work as determination to improve this term. Our tactical analysis will look at how they might play when trying to punch above their weight once again. Can Lazio break into Serie A’s top four?

Simone Inzaghi was first made caretaker coach when Stefano Pioli was sacked in the spring of 2016. Lazio then hired Marcelo Bielsa as coach but he resigned after two days. Inzaghi was then made caretaker again before impressing enough to get the job full-time. Since then, Inzaghi has done so well he’s being discussed as a future Juventus coach. His attractive style of play yields results and he has shown that he can develop young players, notably the tremendous improvement made by Sergej Milinkovic-Savic. Inzaghi was disappointed not to guide Lazio to the Champions League last season, but if they do everything right and two of the five bigger clubs have off-seasons, then Lazio have every chance to give Inzaghi the stage he deserves.

Lazio are one of the most well-run clubs in Europe and this summer has proved no different. They’ve lost their most consistent centre-back, Stefan De Vrij, on a free transfer to Inter which is the big loss compared to last season. They quickly replaced him well though with Francesco Acerbi from Sassuolo. Acerbi has been very good for a number of seasons and slots well into Inzaghi’s back-three. Back-up goalkeeper Federico Marchetti and third-choice striker Filip Djordjevic also left on free transfers. They then sold Felipe Anderson, who struggled to fit into Inzaghi’s formation, to West Ham United for €38m. That sale has paid for some impressive additions.

The headline arrival is probably Joaquin Correa from Sevilla who will be Anderson’s direct replacement. My feeling is Correa fits better into the number 10-role he’s likely to play than Anderson did. So the back-up to Luis Alberto has been upgraded for just €16m. The superb sporting director Igli Tare has also found possible gems for cheap sums in Kosovan attacking midfielder Valon Berisha from RB Salzburg and Real Betis left-back Riza Durmisi. Finally, Tare signed former Fiorentina playmaker Milan Badelj on a free transfer. Badelj will battle Lucas Leiva for the starting position as defensive midfielder. After finding the superb Adam Marusic last season, Tare has enjoyed a great transfer window again.

Tactical analysis: How does Lazio play?

Ever since taking charge, Inzaghi has used a 3-5-1-1 formation with a diamond in midfield. His back-three is complemented by two very attacking wing-backs. The midfield quartet consists of a deep-lying playmaker, a hard-working box-to-box player, a Milinkovic-Savic and a number 10. With Milinkovic-Savic in there, you get a midfielder who gives you extra quality in the final third as well as a huge physical threat in the box. His passing also gives Inzaghi three quality passers, which is key to the movement of his attacking players. Up front, Ciro Immobile has been the main striker and he excelled last season, scoring 29 goals in Serie A and making nine assists in 33 matches.

Lazio’s style of defending is quite flexible as they can defend with man-orientations or with a positionally-orientated system. Usually, they mix the two, with some man-marking down the wings and more positional coverage in central areas. They often use a mid-block and drop into a low-block in big matches. The aim is clear; to win the ball and have lots of space to break into with the pace of Immobile and the wing-backs.

Counter-attacking is the main attacking strategy of Lazio and they are ruthless in transition. They move the ball quickly and always find a teammate on the move forward. With a striker as deadly as Immobile having Luis Alberto’s passing ability to set him up, you are guaranteed goals. When building attacks, Lazio often look to progress into the opposition half quickly and when there, they have some interesting solutions. Sometimes, they use Milinkovic-Savic’s aerial excellence to quickly progress the ball forward.

A key feature of Lazio’s game is quick third-man-combinations in the final third. A superb example is highlighted below. As one Lazio attacker plays the ball into the striker Caicedo, the midfielder Luis Alberto makes a deep run into the empty space behind Fiorentina’s defense. Caicedo instantly plays Alberto, the third man, through on goal. These combinations can be found multiple times in each game. 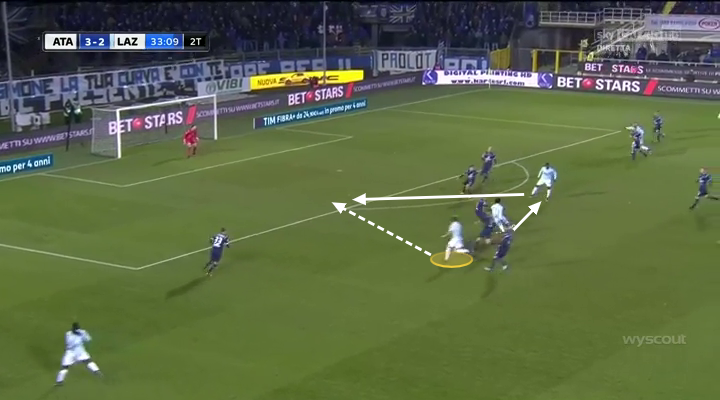 These types of deep runs from midfielders are a typical feature of Lazio’s attacking play under Inzaghi. Marco Parolo is the master of these runs and times them to perfection. Milinkovic-Savic is also very clever with his runs. With playmakers like Luis Alberto, Milinkovic-Savic, Lucas Leiva and now Badelj and Correa the likes of Parolo will get the ball when making the run. This simple fact prompts them to do it again and again and again, causing all kinds of problems for the opposition. 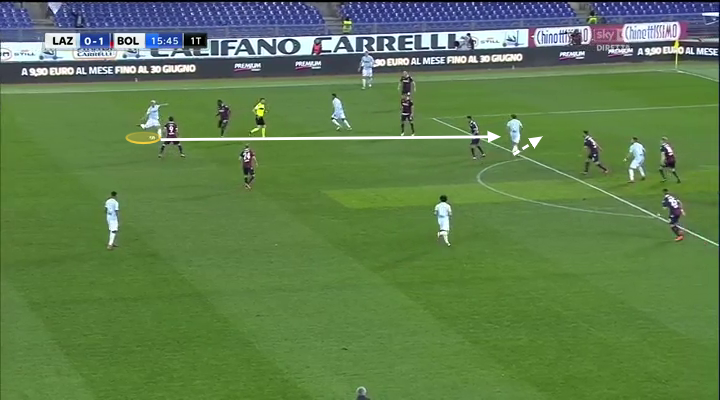 The scene above is a good example of how the midfielders join Lazio’s attackers through their deep runs. Here, Alberto threads a pass through an entire team to find a midfielder behind the opponent’s defensive line. It’s not just the midfielders making these runs though, Ciro Immobile is fantastic with his deep runs and the wing-backs always provide a wide option to progress the play. 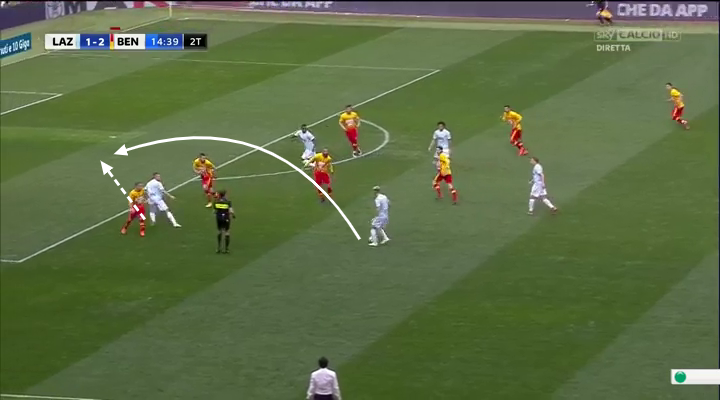 The above image is a good illustration of Lazio’s willingness to attack in-behind. There is virtually no space to attack here but two Lazio players try to get in behind. Luis Alberto’s creative solution puts Immobile through on goal and gives them a goal. Willingness to run and creative playmakers; it’s a match made in heaven.

Lazio will probably continue with their 3-5-1-1 and there haven’t been too many changes in the personnel. That likely means the below team will start most Serie A games. 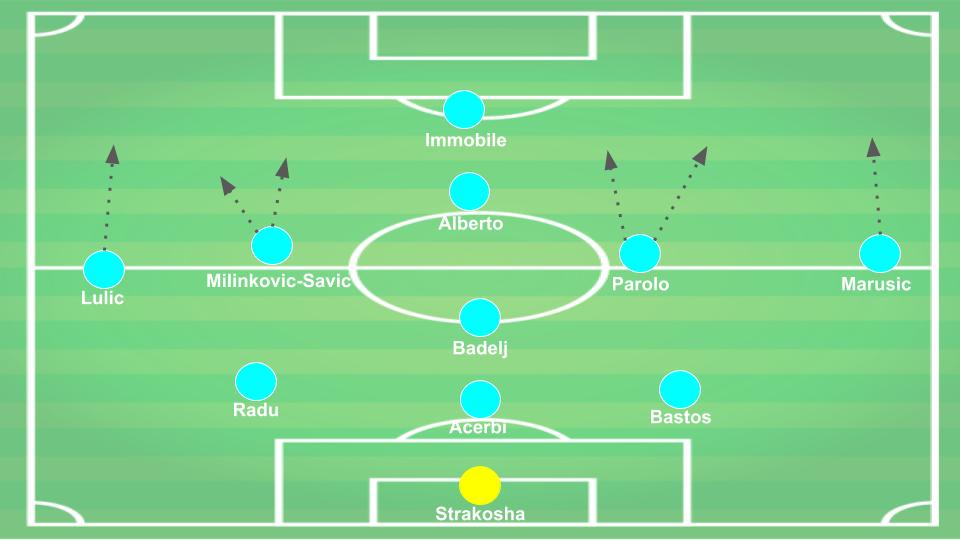 Thomas Strakosha is a fantastic goalkeeper who keeps improving with every game. In defense, Acerbi is a good replacement for De Vrij and slots in well between Bastos/Wallace and Radu. Badelj is better than Leiva in my opinion and should start as the defensive midfielder. Milinkovic-Savic, Parolo and Alberto are key to this side and won’t be displaced. The same goes for Marusic and Senad Lulic down the wings. Up front, Immobile is the main man and if he can repeat just 80% of last season’s contribution, then Lazio will have come a long way.

Lazio have a good team and a very good coach. The sporting director Igli Tare has once again created a good squad. If everything works out perfectly then they have the chance to reach Champions League football. There are, however, five Serie A clubs with more money who should finish above Lazio so competition is fierce. But in Simone Inzaghi they trust. And they have every right too. 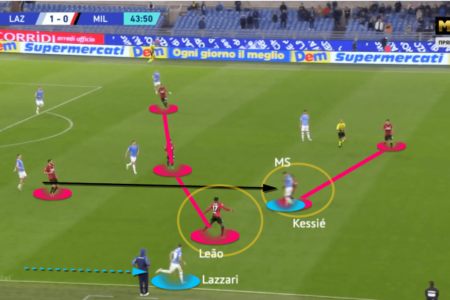 The Serie A title race of 2021/22 has entered the final road, as AC Milan and Napoli are chasing Inter […]