Lazio have one of Europe’s best scouting networks which has led them to identify a number of virtually unknown players to go on and thrive in Serie A. Sporting director Igli Tare has stated that it’s a network based on trusted relationships and no extended “system” which has served Lazio so well over the years. Successes include Sergej Milinkovic-Savic, Luis Alberto and stalwarts like Stefan Radu and Senad Lulic who was both picked up on the cheap. The latest success is the 25-year-old Montenegrin wing-back Adam Marusic. Marusic was signed from Oostende in Belgium last summer and has been fantastic this season and quickly established himself as one of Italy’s best wing-backs. Let’s take a closer look at the latest jewel discovered by Tare and his crew.

Adam Marusic was born in Belgrade in 1992, in the midst of the long and devastating Yugoslav Wars. After starting his career at Teleoptik, he rose through the ranks at Vozdovac and made his first-team debut in 2010. After 89 Serbian SuperLiga games for the club, Marusic was sold to Belgian club Kortrijk in 2014. Marusic quickly established himself in Belgium and became a mainstay of the Kortrijk team. After 71 league appearances over two seasons for Kortrijk, he made the move to Oostende. He only stayed at Oostende for one season, making 35 league appearances and scoring five goals before Lazio snapped him up last summer. He mainly played as a winger on either side in Belgium but also had spells at full-back. At Lazio, he’s therefore been used as a wing-back. Marusic rise has continued in Italy with the Montenegrin making 27 starts in Serie A so far and 31 in all competitions. He’s scored three goals and made six assists from his position as Lazio’s right wing-back.

In Simone Inzaghi’s 3-5-1-1 formation, Marusic plays as the right-sided wing-back. In defense he drops back to make it a back-five while in attack he pushes forward and provides maximum width for the team. It’s from this position the Montenegrin has become such a threat going forward with effective wing-play. I’ve highlighted Marusic below to show the attacking position he takes up in Lazio’s setup. 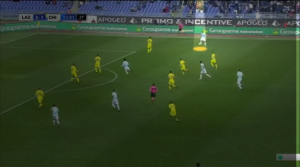 There’s no doubt that Adam Marusic strength lies in his attacking play. As you’d imagine from a former out-and-out winger, the Montenegrin is good in dribbling situations and has very good delivery from wide areas. In Serie A this season, Marusic averages 0.9 dribbles per game which isn’t as high as you might imagine and he averages 1.2 key passes per game. One reason for his somewhat low dribbling stats, given his quality in these situations, is the quality of his delivery from wide areas. He doesn’t need to dribble his way past an opponent. Instead, he can cross or cut the ball back for a teammate without going past his opponent. In the image below, he bends a beautiful cross into the back post for his teammates to attack. 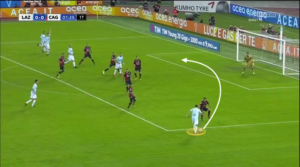 And in the below scene, Marusic plays a low cross into the path of Luis Alberto who steeres the ball in from close range. 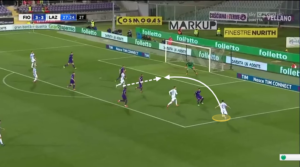 Apart from creating chances for his teammates, Marusic also provides a dangerous threat himself. He is very good at timing runs in-behind the opponent’s left-back/left wing-back and from there he can either tee up a teammate or go for goal himself. This highlight another reason why his dribbling stats might seem low; he’s never isolated on the flank and forced to dribble. Rather, Lazio’s attacking structure is well-balanced and Marusic always have support when he receives the ball. This makes wall-passes or runs in-behind more effective than if he would try to dribble himself. Below is one example when Milinkovic-Savic plays him through. 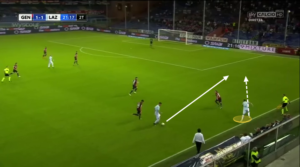 Another example of a well-timed run by Marusic can be seen below when he was played through by Immobile and scored against Hellas Verona. 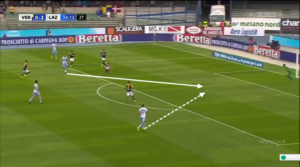 When he ends up around the goal then his natural attacking instincts show. Away at Milan, Marusic scored a truly excellent goal. Lazio moved the ball quickly on the left before changing sides and finding the wing-back. The Montenegrin cut inside Milan’s left-back onto his left foot and then placed a superb curling finish out of the reach of Gianluigi Donnarumma. 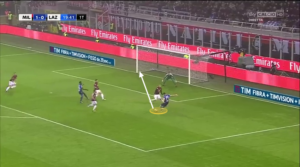 Adam Marusic’ three goals and five assists in 27 starts and four cameos in Serie A is a very good return for his first season in one of the big leagues. His contribution and performances down Lazio’s right-flank has been one of the keys behind Lazio becoming Italy’s highest scoring side so far with 85 goals in the league.

The main question to ask of Marusic as a wing-back is to look at his defensive performances. Statistically, he averages 0.8 tackles and 1 interception per game in Serie A. Lazio’s collective defending isn’t as good as their ruthless attacking which shows in the 44 goals they’ve conceded. That’s at least 16 more than any of the other top five teams. And without doubt is it defensively where Marusic can improve next season. In terms of his individual defending he’s quite good. It’s rare to see him be dribbled past, in fact it only happens once every two games on average, but it’s in his collective understanding of defending where he needs to improve.

I’ve picked an example below from a game at Bologna. As Simone Verdi is about to play his teammate in-behind Lazio’s defense, Marusic has failed to read the situation. The space between him and the right-sided centre-back is too big (granted, the centre-back has moved across too far) and gives Verdi the chance to play the pass. Marusic’ loss of concentration here could have resulted in a conceded goal for Lazio, but he shows off his pace as he gets back to make a timely tackle. 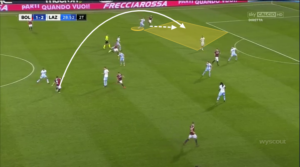 These lapses of concentration happens from time to time with the Montenegrin wing-back, but if he can eradicate this flaw in his game then he will be a fantastic player also in defensive situations. With just one season at the highest level, you’d think he will improve further next season.

Adam Marusic is the latest jewel in the crown that is Lazio’s recruitment. His performances at right wing-back for Simone Inzaghi’s high-scoring, swashbuckling Lazio side has been a revelation and he has probably been the best right-back/right wing-back of the season in Italy. Going into the future, Marusic will likely improve further and he is at the right club to continue growing. If he does, then a move to the giants of the Italian game might be on the cards.