Luis Alberto have somewhat surprisingly emerged as one of the best players in Italy this season. After a difficult first season at Lazio the former Liverpool midfielder has been splendid this term. Alberto only made four starts and five cameos last season while he’s started 31 Serie A games this term. The Spaniard is one of only nine players in Europe’s top leagues to record double figures for goals and assists. Luis Alberto’s haul of eleven goals and fourteen assists in the league so far highlight his improvement. Let’s look at the reasons behind the Lazio’s creator’s sudden rise.

Luis Alberto came through the ranks of Sevilla’s cantera and made his debut as an 18-year-old in April 2011. In the summer of 2012 he was loaned to Barcelona B for a season. Alberto scored 11 goals in the league in Catalonia and impressed viewers. One of those was Brendan Rodgers. At the end of the season Rodgers brought the Spanish playmaker to Liverpool. Liverpool’s 2013/14 season will be remembered by their superb form in the second half of the season which looked like it would bring a first league title in 24 years. Then Steven Gerrard slipped, Demba Ba scored for Chelsea and Liverpool imploded at Crystal Palace shortly after. Rodgers deployed a very attacking team but the young Luis Alberto only managed nine substitute appearances in the league. He was then sent on loan to Malaga in 2014/15 though it only brought six starts and nine cameos. The following season, 2015/16, Alberto joined Deportivo La Coruna on loan. He made 25 starts in the league and impressed Lazio who bought the midfielder from Liverpool in the summer of 2016. The fee was only €4 million. After a tough first season in Rome, Alberto has established himself as one of Italy’s best players this season. Lazio’s playmaker has also received a first Spain call-up.

Lazio’s head coach Simone Inzaghi deploys a 3-5-1-1 formation where Luis Alberto usually plays as the number 10 behind prolific striker Ciro Immobile. The three midfielders behind Alberto help create a midfield diamond with the Spaniard at its top. This formation gives him good support from behind with the likes of Marco Parolo, Lucas Leiva and Sergej Milinkovic-Savic linking up well with Alberto in central areas. For a creative player this type of support is vital. It minimises his defensive responsibility and he’s allowed to focus on creating rather than defending. That’s one of the reasons he’s been shining so brightly. Previously Alberto has been unfortunate enough to end up with coaches deploying him in wide positions. Inzaghi has realised where the Spaniard is at his best though and as a number 10 Luis Alberto has become Lazio’s main creative outlet.

Interestingly, when chasing games late on Inzaghi has sometimes deployed Alberto has the deepest midfielder in the midfield diamond. This role, which the Italians call regista, gives the Spaniard the chance to control every build-up from deep. It’s no surprise he’s relished this responsibility when given the chance. Alberto also enjoys a lot of freedom in the way he plays as he often drifts from his starting position to find empty spaces to exploit. It’s therefore not unusual to see him drop very deep or towards the wings to combine with the wing-back and the ball-near midfielder.

In all competitions this season, Luis Alberto has made 19 assists. That’s a really high number considering he managed only two last season. With trust from his coach and a sky-high self-confidence, Alberto has become one of Italy’s best creators. His link-up play with Milinkovic-Savic, Immobile and Parolo has seen him create multiple chances for the trio throughout the season. Alberto’s ability to create chances for his teammates is reflected in the statistics. Only two players in Italy, Alejandro Gomez (2.8) and Lorenzo Insigne (2.7) create more chances on average than Luis Alberto’s 2.6 chances/game. By comparison, Juventus main creators Miralem Pjanic (2.0), Douglas Costa (1.8) and Paulo Dybala (1.6) create way less. No player has made more than Luis Alberto’s 14 Serie A assists. Let’s look at how the Lazio playmaker show this creativity in games. 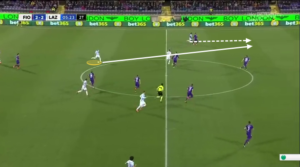 The image above goes a long way to explain the vision and understanding that lies behind everything the Spaniard does on the pitch. As he’s about to receive a simple sideways pass in midfield, Alberto scans his surroundings and identifies the run of Jordan Lukaku down the left. Alberto also realises the open space behind Fiorentina’s right-back. As the ball travels towards him he changes his body position and prepares to unleash a one-touch through-ball to put Lukaku in behind Fiorentina’s defence. This action highlights everything you need to know about Luis Alberto’s vision. He always scans the pitch in this way and is aware of his surroundings at all times. It might sound easy, but it’s probably among the hardest thing for players to grasp.

In the below image, Alberto has again dropped out of his starting position. This time he sees the superb run of Ciro Immobile and plays a razor sharp through-ball to the Italian. Given how quickly this action happens, Salzburg have no time to drop off and minimise the space behind the defensive line. Immobile therefore has lots of time as well as space and scores. If you look at the image closely you’ll see that Alberto’s pass takes out NINE Salzburg players. NINE! In one pass. Teams are hereby warned not to give the Spaniard the chance to look up and pick a pass if they’re not organized to perfection. 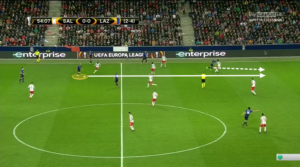 Here’s another example of a through-ball which beats almost an entire team. Bologna have nine men back here but are caught ball-watching as Luis Alberto finds a trademark reverse-pass through their lines to create a goal for Lazio. 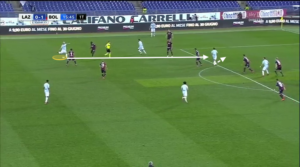 Many players have as good technique as Luis Alberto, but they don’t have the same vision or confidence to pull off these types of passes. Credit must go to Inzaghi here who provides a platform for Alberto to take risks in his passing. The reverse-passes and through-balls highlighted below are one trademark Alberto pass but the scooped pass over a low-block is also often utilised. Below, Benevento defend a lead at the Olimpico and drop deep and look to force Lazio wide. Alberto identifies a possible pass to set Immobile through on goal and scoops the ball over the defence. The Italian duly scored. Creativity at its finest. 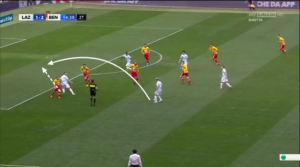 It’s not only when in an organised attacking shape that Luis Alberto impress with his passing. Also in attacking transition does he manage to find the right pass at the right time to play teammates through. In the scene below, at Juventus, Lazio counter-attack and Immobile has just flicked the ball onto Alberto. The Italian spins round, continues his run and Alberto takes a touch before playing the pass at the exact right time. Immobile is clear on goal and scores Lazio’s first in a memorable win in Turin. 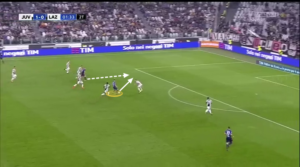 With superb vision, creativity and technique Luis Alberto is always threatening when given time and space to pick passes. The Lazio playmaker has been fantastic this season and the 19 assists is the evidence why. Of those 19, two have come from free-kicks, eight from corners and nine from open play, highlighting his overall importance to Lazio.

Apart from 19 assists and creative playmaking, Alberto has also managed to score twelve  in all competitions. Of those twelve one was a penalty and two were free-kicks. The remaining nine goals have come in open play. Most of them have been the result of clever runs into the box where he’s been picked out and then finished ruthlessly. Possibly the best goal he’s scored is the one I’ve illustrated below. It also goes some way in explaining one of the trademarks of this Lazio side he’s such an important member of. First he plays a pass to Felipe Anderson before continuing his run behind the Brazilian. Anderson lays it off to Felipe Caicedo who instantly plays it through the defensive line to find Alberto clear on goal. The Spaniard made no mistake. These types of runs from midfield are key to Lazio’s approach to create chances and Alberto makes these runs brilliantly. He times the runs well and quickly identifies the space he’s supposed to attack. 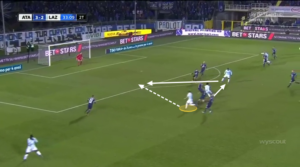 His stunning link-up play with Immobile in transition has been the source of a few other goals and there has been two absolutely superb solo goals from the Spaniard. With three games left to play in Italy, perhaps Alberto can manage to reach fifteen goals for the season. Even if not, the twelve he already has highlights how dangerous he can be even without his creative passing.

What the future holds

After a stunning season, Luis Alberto has established himself as Lazio’s playmaker and one of Serie A’s best attackers. Given his first Spain call-up recently he has an outside chance of making the World Cup squad. When Serie A returns next season he will have to repeat this success to make us certain he belongs at the level he’s showed this season. As they say, doing it once is nothing but doing it twice is a habit.

Lazio play Atalanta on Sunday and a win would practically confirm their place in next season’s Champions League. They are level on points with Roma as things stand which places both Roman clubs four points clear of Inter in fifth. Given Inter’s inconsistency it’s hard to imagine Lazio won’t be in Europe’s finest competition next year. It would be a well-earned reward for their superb Spanish playmaker.