Ferran Torres: The next Marco Asensio?

Marco Asensio took the football world by storm. In his debut for Real Madrid, he scored twice against Sevilla. Since 2016 he’s developed into a national player for Spain and likely replacement for Cristiano Ronaldo. However, there is one talent in Spain which gets compared regularly to Asensio. His name is Ferran Torres. He’s eighteen years old and plays for the first team of Valencia CF.

For years Spain has produced so many talented footballers. Most of those players came from the well-known academy of Barcelona, La Masia. In recent years Barcelona struggled to integrate their talents into the first team. However, there are other teams in Spain who bring young talents into their first team. One of those was and still is Valencia CF. Players like Juan Mata, David Villa and David Silva all developed at Valencia. In the current team, José Gaya is a graduate of the Valencia academy. The next talent who wants to play regularly for the first team is Ferran Torres. He is considered one of the most promising talents in Spain. Barcelona wanted to pay 25 million euros for him, but Torres rejected their offer because he wanted to play for the first team of Valencia CF.

In this piece, I am going to show you why Barcelona wanted to pay such an amount of money for Ferran Torres.

Usually, Torres plays on the right side near the touchline. Starting from there he can threaten a defence with his dribbling and movement in the open space. Especially, his 1v1 is on a high level. He can use both feet which makes him unpredictable. His crossing with the right foot as well as his shooting with the left foot is on a high level but can develop in the next years. Furthermore, he shows a lot of potential in terms of through balls. Ferran Torres is only eighteen years old, so there is a lot of time to develop. His appearances so far promise a great career which probably won´t let him stay in Valencia forever.

What have most top wingers got in common? They all possess great technical abilities and can accelerate quickly. Ferran Torres combines those attributes with a good first touch, intelligent movement of the ball and a high agility with the ball at his foot. His wide position helps him to create space for himself in order to start his dribbles. He uses body feints to dribble or he eases his run to use his acceleration to get by the defender.

Here, he receives the ball near the sideline and starts his run. Near the defender, he eases his run and uses a body feint to go past the defender while always protecting the ball nicely.

What makes him so unpredictable is the ability to change direction quickly. That makes it hard for defenders to recover because they can only foul Torres when he changes the direction. 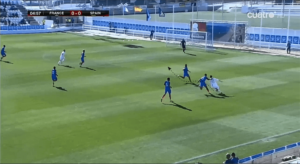 In the situation from above, he cuts inside when the defender tries to recover. The helping defender gets unbalanced because he wanted to close the way towards the baseline. In the end, France defenders could only foul Torres to stop him.

Due to his technical abilities, he can even shoot pretty accurate out of a full-speed sprint. 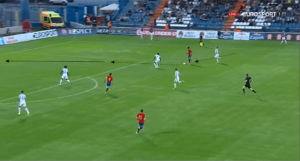 The advantage of being good with both feeds is visible above. Torres again starts his dribbling from the sideline. The defender wants to steer Torres onto his right foot. Torres prefers to shoot with his left, but he still just sprints by the defender and shoots on goal with his right foot. The whole scene resulted in a good chance for Spain.

The importance of the first touch

The first touch is usually the skill which divides players between average and world-class. Ferran Torres clearly belongs in the second category. His first touch is pretty intelligent and technically perfect. He often reads the movement of defenders and can, therefore, unbalance them. 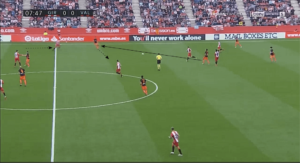 Here, he realises that the fullback is going to press him. Furthermore, Girona left a lot of space uncovered in the centre. With his first touch, Ferran Torres pushes the ball back which draws the fullback completely out of position. 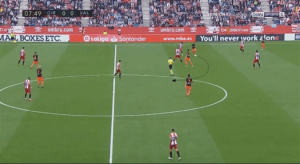 Now, he uses his acceleration to dribble in the open centre. With his body, he protects the ball and the defender cannot recover because Torres is too fast. 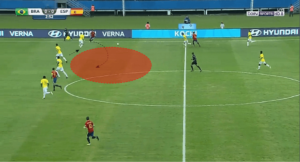 Again, the opponent left too much space uncovered in the centre. Furthermore, the defender moves out of position way too quickly and Ferran Torres is able to go by the defender with the first touch. Then he attacks the red-marked space.

But Ferran Torres is not only capable of using the first touch to dribble past defenders when he starts from the sideline. He also shows glimpses of a good ball control in the centre. There it is more difficult to take the ball in the right direction because defenders can challenge you from every direction. 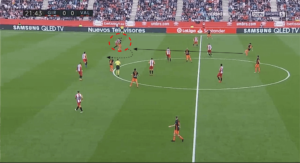 With available space behind him, Ferran Torres controls the ball nicely and gives the defender no chance to intercept the pass or tackle him successfully. If he can improve in that area Torres could also be a threat with his dribbling between the lines which would add another dimension to his game.

In my last article, I discussed the movement without the ball of Jann-Fiete Arp who really impressed me in that area. However, Torres and Arp are hard to compare but similar to the young German Ferran Torres shows intelligent behaviour without the ball.

Naturally, he often sprints behind the defensive line due to his wide position on the right side. 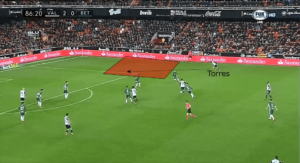 His timing in those situations is really good and he anticipates the right moment to accelerate so that the defender can’t defend that run properly.

Together with his speed and his ability to hit crosses accurately he is a dangerous threat on the right side who you do not want to leave unmarked. At Valencia Marcelino understands to create a good environment for his wingers, Goncalo Guedes, for example, does benefit from the system at Valencia CF.

Besides his sprints behind the defence, he also understands how to create space for himself by reacting to the movement of the defenders. 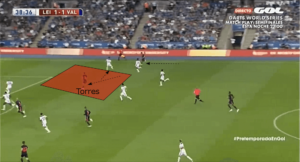 Here, the fullback of Valencia CF beats the first opponent who then needs help from the opposing fullback. Ferran Torres realises that he is now unmarked. Consequently, he moves away and in the marked space. In the end, his teammate can find him centrally in an advantageous situation.

Furthermore, he anticipates situations quickly. With his speed, he can swiftly exploit holes in the defence before the opponent can recover.

The following scene shows how Ferran Torres actually never stops moving. After he doesn’t receive the ball he changes direction and goes into the box. 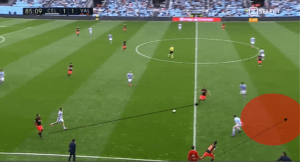 Here, his third-man run sets the defence under pressure because the fullback tries to defend the passing channel while Torres starts his run. Although, he doesn’t receive the ball Ferran Torres doesn’t stop his run.

In the box his behaviour is intelligent. He moves in the space behind the defenders which give them trouble because they have to watch Ferran Torres and the ball simultaneously which is not possible.

As a result, when he receives the cross he has space and a clear opportunity to shoot on goal. In the end, the fact that he came in such a good position is important although he couldn’t score.

Can he score goals?

Overall, Ferran Torres finds himself in good goal-scoring situations due to his clever off-ball movement. For instance, he usually stops his run at the edge of the box. The defence has to drop deeper in order to defend the strikers what left Torres unmarked on the right side.

During a game of Spain’s Youth Team, he even shows that he can occupy the box nicely. 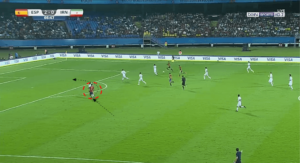 Again, he is positioned behind the defender and then he quickly accelerates and the defenders find himself behind Torres and can´t prevent Spain from scoring.

All in all, Ferran Torres is a great talent considering his age. With his speed and his dribbling skills, he will fight for a starting spot next season at Valencia CF. Besides the skills I mentioned above, Torres shows glimpses of good passing qualities. However, he has to improve his passing as well as his shooting. He can develop into a winger who can score as well as deliver good crosses. If he is capable to improve those skills he will clearly become one of Spain’s best players and Valencia CF will probably earn a lot of money by selling Ferran Torres.