In terms of Champions League titles only Real Madrid can better AC Milan’s record of seven. The Milanese giants were a European powerhouse in the 90’s and 00’s but have since regressed dramatically. Last summer was met with lots of optimism as Milan signed some very good players and a new owner was in place. The season that followed was a disaster until Gennaro Gattuso stepped in and steadied the ship. Gattuso even secured European football. Now another summer is almost over and excitement is once again building at Casa Milan. There’s been some exciting signings and there’s a new owner in charge.

In this preview we look at Milan’s summer dealings, how they might set up in Serie A and our tactical analysis looks at Gattuso’s style of play.

Gennaro Gattuso took charge when Vincenzo Montella was sacked after a disastrous start to the season. The former midfielder made some tactical changes and led the club through a very good spell in the winter. In the end he led Milan to sixth and a place in the Europa League and to the Coppa Italia final. There’s been rumours that Antonio Conte is lined up to replace him in the future but as of now Gattuso is the man in charge and he’s deserved the chance to get a full season in the San Siro hotseat.

Milan’s summer has been dominated by the ownership issue which was finally resolved when the American hedge fund Elliott Management took control of the club instead of Yonghong Li. The new owners ensued UEFA about Milan’s finances which allowed them to compete in the Europa League. They then installed Leonardo as sporting director and brought back Paulo Maldini as Strategic Development Director. Both appointments appease the fans.

Milan had made three free transfers prior to Leonardo’s arrival. The new signings were Pepe Reina from Napoli who joins as Gianluigi Donnarumma’s back-up, Croatian attacker Alen Halilovic and his countryman Ivan Strinic who will provide cover at left-back. Leonardo then oversaw the remarkable triple deal which saw Leonardo Bonucci return to Juventus in exchange for highly-rated Mattia Caldara. The third part of the deal was Gonzalo Higuain’s arrival at Milanello. What a signing that is for the Rossoneri. Bonucci is also the only notable departure from the squad.

Tactical analysis: How does Milan play?

Gattuso had almost exclusively used a 4-3-3 in his time in charge at San Siro. Defensively, Gattuso wants his side to be compact and to press the ball intensively when it reaches the middle third. One common pressing scheme is the one I’ve highlighted below. One of the central midfielders, in this case the left-sided Bonaventura, steps up to join the striker in the first line of pressing. The wingers join the defensive midfielder and the ball-far central midfielder in establishing a new four-man midfield behind the press. 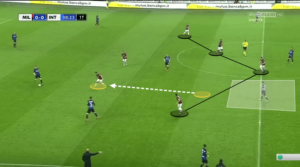 I’ve highlighted space in the right-sided half-space where the Inter winger Candreva has moved inside on this occasion. This has often been a problem area for Milan under Gattuso. Especially in the game against Inter did Milan struggle to close this space behind the pressing central midfielder. The press was therefore in vain and the press was repeatedly broken. Another issue they’ve had at times has been poor back-up to the first line of pressing as the second line (the midfield) has been too deep and the press has therefore easily been broken by the opponent. These are issues Gattuso must look to solve. When they manage to close the half-space though, they’ve been tough to play against since they press with the urgency typical of their coach.

It’s a very narrow 4-3-3 in attack as both wingers repeatedly make inverted movements in possession and leaves the flanks to the full-backs who sometimes take up the option of bombing on. In the image below I’ve highlighted Suso in the right-sided half-space while also showing Calhanoglu’s movement inside from the left wing. The right-back Calabria (white) is attacking the wing to give Suso more room centrally. 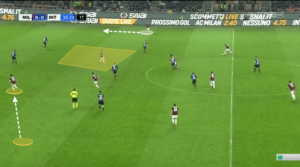 Both central midfielders, usually Kessie and Bonaventura, then looks to get forward and into the box to support the lone striker when Milan look to cross from the sides. With Higuain coming in as Milan’s focal point we can also probably expect more combination play between the lines with Argentinian excelling in short-passing combinations. Players like Suso, Bonaventura and Calhanoglu will surely relish their new teammate’s abilities.

Milan will most likely start with Donnarumma in goal but Reina will provide strong competition. Calabria made the right-back spot his own last season but Andrea Conti will be back from injury to stake his claim to start after spending all of last season on the sidelines. Caldara replaces Bonucci alongside Alessio Romagnoli at the heart of defense but the excellent Mateo Musacchio also gives Gattuso the option of playing with a back-three. Ricardo Rodriguez should be able to see off competition from Ivan Strinic to start as left-back. Lucas Biglia is a very good playmaker in defensive midfield but Manuel Locatelli has had a good pre-season and will challenge the Argentinian. Kessie and Bonaventura looks certain to start in central midfield but a late move for Tiemoue Bakayoko would increase competition for places. Suso, Higuain and Calhanoglu will be the front three for Gattuso. The only issue with that trio is a lack of pace but Higuain’s superb movement in-behind might make up for that if the creators Milan have plenty of can spot his runs. 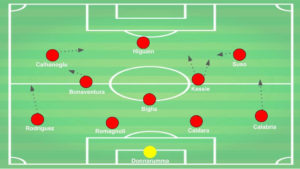 It would be interesting to see if Gattuso decided to use the three very good central defenders he has at his disposal to try a 3-5-2 or a 3-4-3 in certain games. A 3-5-2 would be interesting since it would suit Conti when he’s fit to play as a wing-back, Caldara is comfortable in a back-three after two years under Gasperini at Atalanta and the midfield three would remain in that shape. Gattuso could then choose to use Suso or Calhanoglu just behind Higuain or opt for Cutrone alongside the Argentinian. Either way, it’s a very good plan B for Gattuso given the players in his squad.

Elliott Management seems far more reliable than Yonghong Li ever did and their early actions such as the return of Leonardo and Paulo Maldini is loved by the fans. The arrival of Gonzalo Higuain has also sparked optimism. If Gattuso’s men can build on a promising second half of the season last year then Milan have the chance to challenge for fourth. That would mean a return to the Champions League. The Rossoneri faithful dreams of a return to football’s finest tournament in which they’ve been so successful.

Want to know more about Serie A? Read our tactical analysis of Eusebio Di Francesco, Luis Alberto, Roma’s transfer dealings and our preview of Juventus.