It is still unclear just how busy the January transfer window is going to be. With COVID-19 still continuing to have an impact on club finances through the cancellation of games and the limiting of spectators clubs across Europe will be walking a very fine line between balancing their books and pushing their chips on to the table in the belief that one more signing will make the difference between success and failure over the course of the rest of the season. There are more drawbacks to recruiting in January than just COVID of course. The January transfer window has long provided a difficult market as clubs are generally unwilling to let their better players leave unless the buying club are willing to spend a premium and even then players may not be willing to move in the middle of the season if they are currently getting reasonable game time at their current clubs.

Although we are still a few days (at the time of writing) from the opening of the window there looks to have been one big deal agreed already with Barcelona having agreed to pay Manchester City a reported €55M for the services of the Spanish international. There are, of course, still questions around the deal given the financial predicament that Barcelona are still in although they are reported to have taken out a bank loan that will enable them to pay the fee for Torres. The bigger question will be around whether Barcelona will be able to register Torres to play for them. La Liga and the Spanish Federation operate a financial fair play system and it is this that prevented Lionel Messi from being re-registered to play for Barcelona in the summer. Have Barcelona found a way around this system or will they have to sell players who are registered in the first instance in order to make this possible?

In this data analysis, we have used our exclusive xGOLD tool to identify four young attackers who profile in a similar way to Ferran Torres from a statistical perspective. In this article, I will provide a brief analysis of these four players along with showing their data profile. All of the bar charts in this data analysis show the percentiles comparing each player to the rest of the wide attackers in their league. For example, a higher value on shots per 90 doesn’t mean that player takes more shots, it means he takes more shots than a higher percentage of wide attackers in his league.

The data that is used throughout this piece is from Wyscout and the player dashboards that are used are custom built using Tableau. 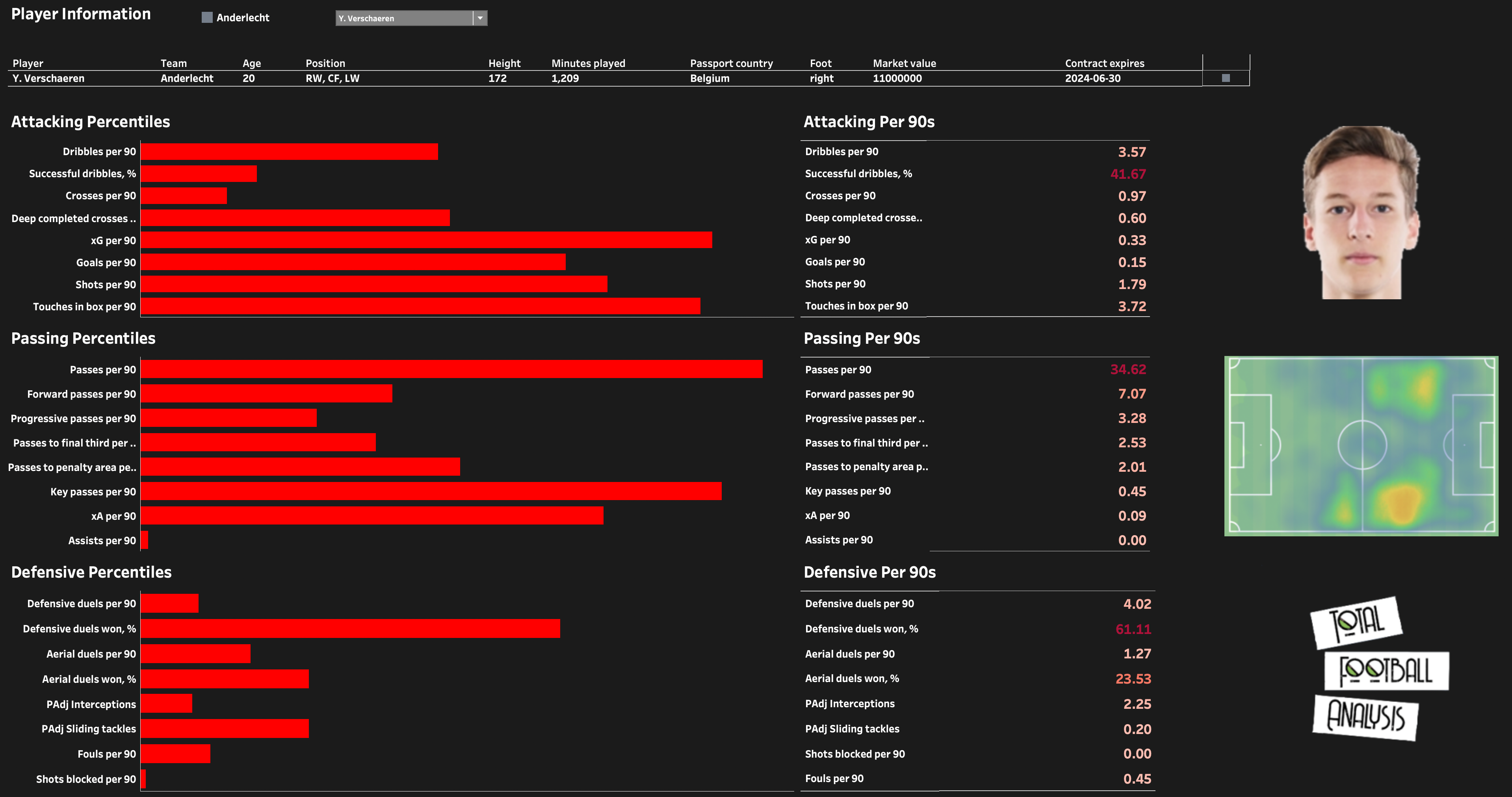 The first player on our list is the 20-year-old Belgian attacker Yari Verschaeren. He is a product of the youth academy at Anderlecht and has never even been out on loan, this is a sign of how highly he is rated by staff at the Belgian side. At the time of writing this article Verschaeren has also been capped six times by the Belgian national team, having worked his way through the various youth team levels, and given the depth of quality that they can choose from this is another sign of the youngsters quality. He is listed at 172cm | 5’7″ and he is predominantly right-footed. Vershcaeren prefers to play from the left-hand side of the attack where he can cut inside and threaten the half-spaces and central areas of the pitch although he is also capable of playing on the opposite side.

So far this season we have seen Verschaeren play 1209 minutes in the Belgian top-flight. He is averaging 3.57 dribbles per 90 with a success rate of 41.67%. He is not necessarily a volume dribbler and instead is a wide player who looks to occupy space and then receive the ball before looking for opportunities to connect the ball with teammates as Anderlecht look to access the penalty area. So far this season he has scored 0.15 goals per 90 although his xG per 90 of 0.33 suggests that we can expect this output to improve over the course of the rest of the season. This is from 1.79 shots per 90 and 3.72 touches in the opposition area per 90.

So far in his young career Verschaeren has shown no sign of being attracted to the prospect of leaving his boyhood club in pursuit of opportunties elsewhere. Eventually, however, the young Belgian international will have to move on in order to maximise his potential by playing against opposition players in a top-5 league. When this happens expect to see clubs in Italy and England high on the list of potential suitors. 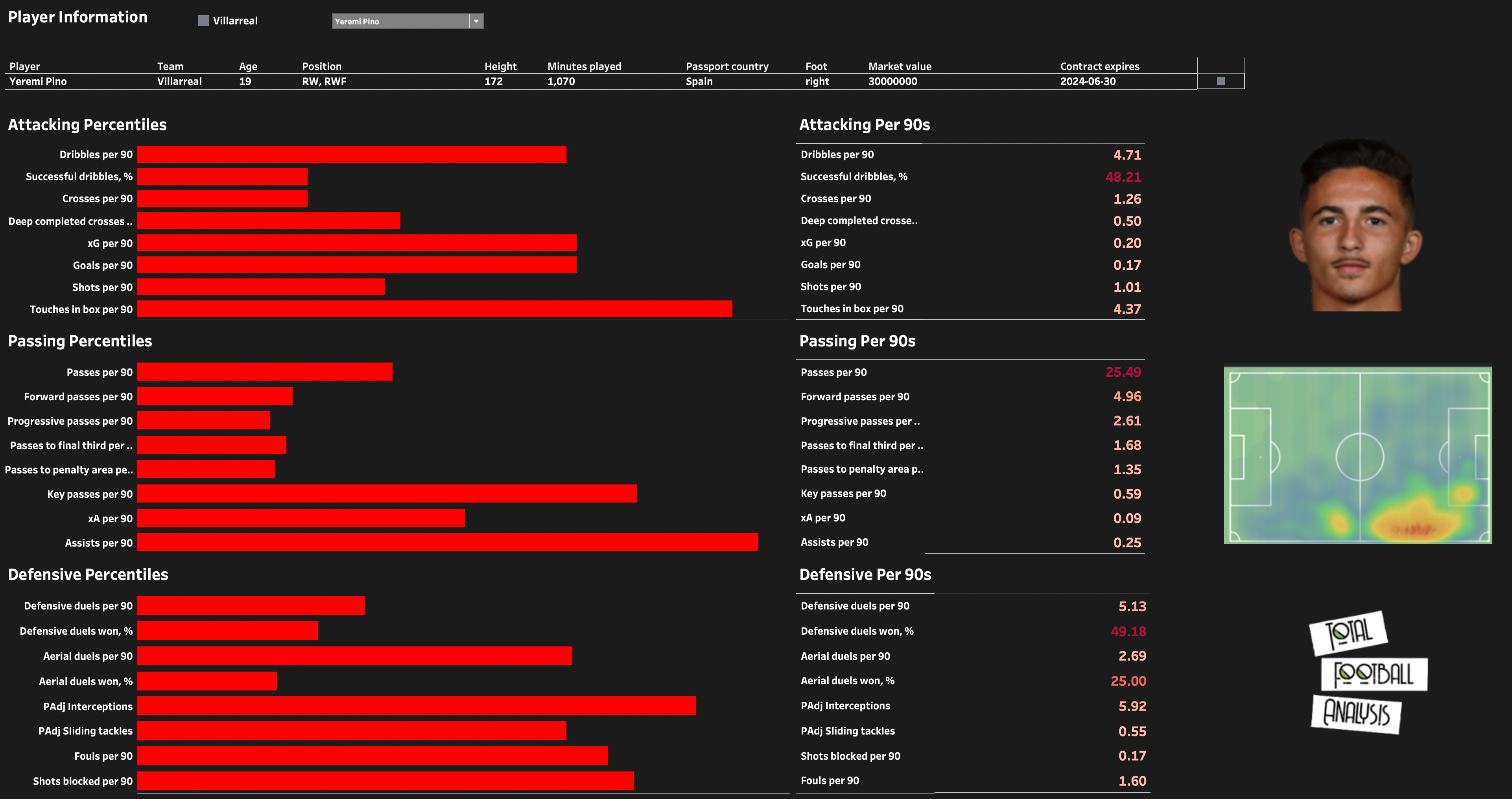 The next player on our list is one who would have been slightly closer to home for Barcelona in the 19-year-old Spanish international wide player Yeremy Pino of Villarreal. The youngster is actually a product of the youth system at Las Palmas and he did not actually move to join Villarreal until 2019. His ascension from that point, however, has been meteoric and at just 19-years-old he is already one of the most electric and exciting young talents in Spanish football. Pino is listed at 172cm | 5’7″ and he is predominantly right-footed.

Unlike Yari Verschaeren we tend to see Pino playing from the right-hand side although despite being right-footed he also displays the ability to attack inside defenders and cut inside to the half-spaces and central areas of the field.

In recent years Villarreal have shown an ability to hold on to their best young players and at the moment Pino has shown no signs that he wants to leave the club. Over the next couple of years, however this is likely to change and the giants of Spanish football are likely to be involved when it does so. 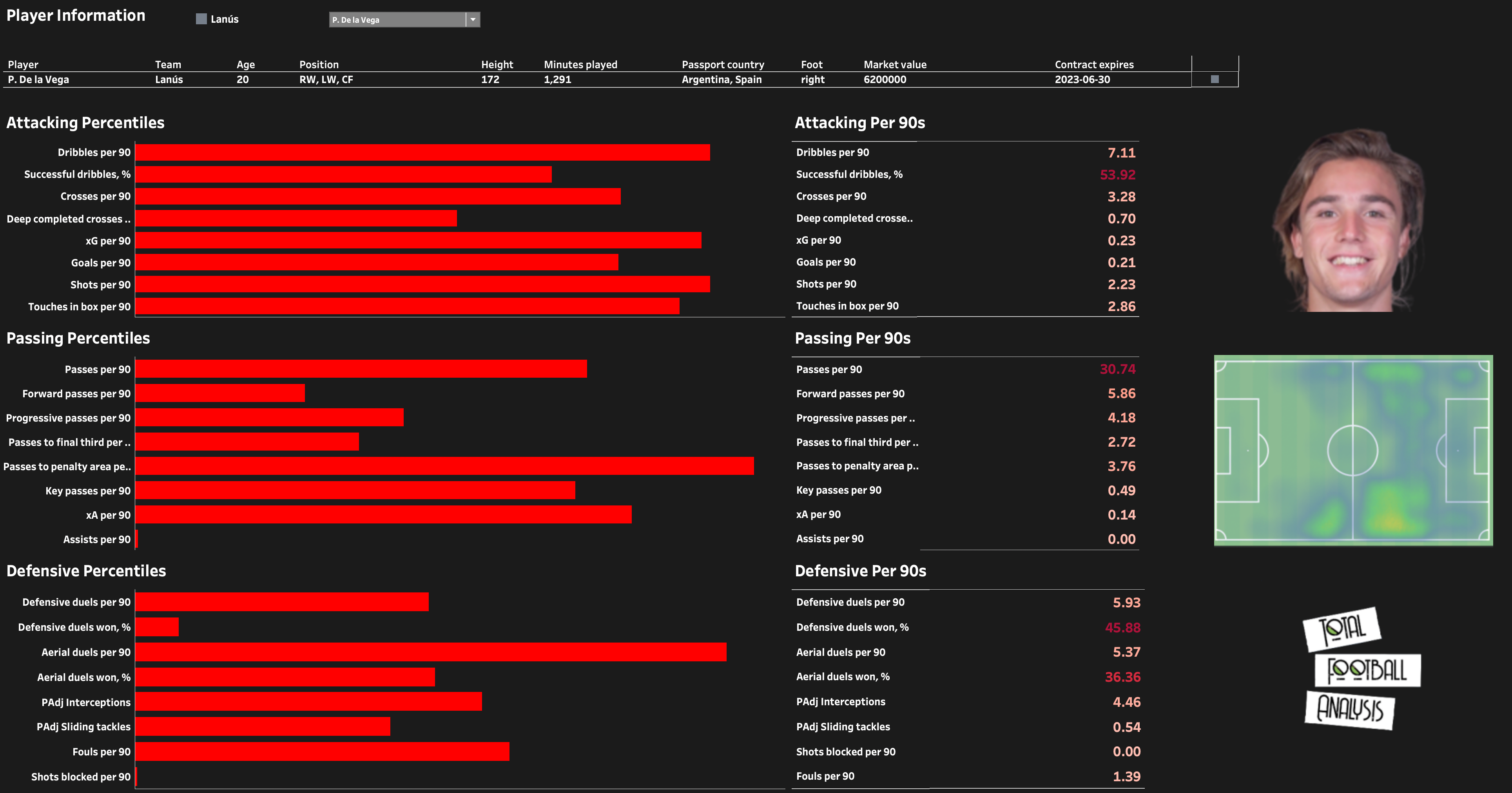 Next up we have the 20-year-old Argentinean wide player Pedro de la Vega who is currently contracted to Lanus in the top-flight of Argentinean football. He is a product of the youth academy at the club and has now established himself as a regular part of the first team. At the time of writing De la Vega has been capped twice by the extremely talented U23 Argentina squad. He is listed at 172cm | 5’6″ and he is predominantly right-footed. Interestingly De la Vega has dual citizenship and he would qualify to play for Italy as well as Argentina. This could help if he requires to be registered to play in Europe. De la Vega is most at home playing on the right of the attack.

I think it is likely that De la Vega will look for a move to Europe in the next 12 months with Italy or Spain feeling like the most obvious destinations. 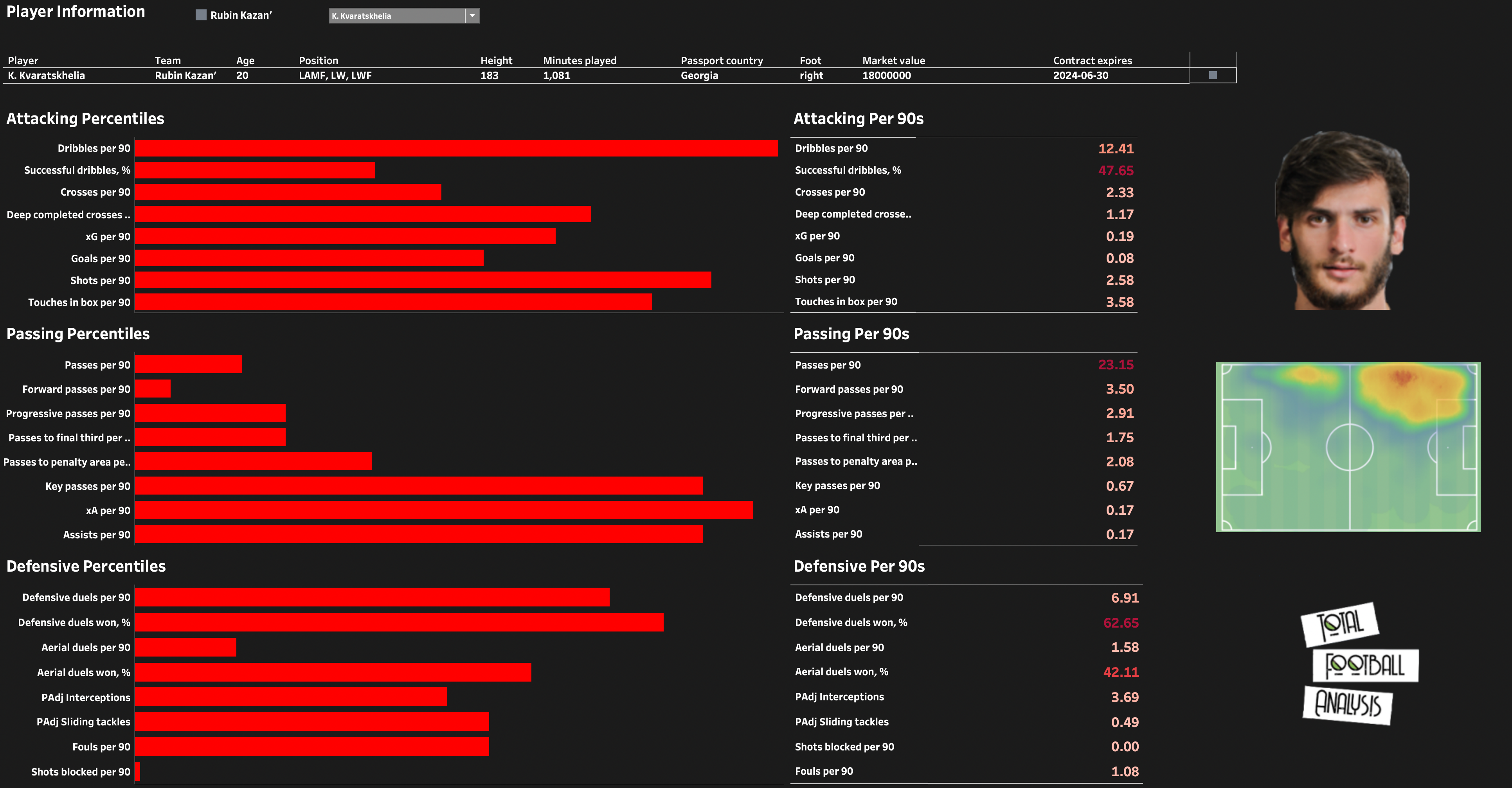 Next we have perhaps the most fun player on the list with the 20-year-old Georgian international Khvicha Kvaratskhelia of Rubin Kazan. He initially came through the youth system at Dinamo Tblisi in his native Georgia and after a loan spell in 2019 with Lokomotiv Moscow in 2019, he eventually moved to Russia permanently the same year as he joined Rubin Kazan on a free transfer. The Russian club stands to make a huge profit when he eventually leaves. At the time of writing Khvicha (as he is generally known) has made 12 appearances for the Georgian national team and he has scored 5 international goals. He is listed at 183cm | 6’1″ and he is comfortable using either foot. He tends to play on the left of the attack and he is a dynamic and dangerous ball carrier.

This season, at the time of writing, he has played 1081 minutes in the Russian top-flight and in that time he has averaged an incredible 12.43 dribbles per 90 with a success rate of 47.65% he is also averaging 2.33 crosses per 90. Khvicha is not a prolific goal threat and he is currently only averaging 0.08 goals per 90 from an xG per 90 but his underlying attacking numbers of 2.58 shots per 90 and 3.58 touches in the opposition area per 90 suggest that his goal output could improve. He is also a creative threat with an average of 0.17 assists per 90 and 0.67 key passes per 90.

Khvicha has been heavily linked to a move to the Premier League in the last two transfer windows and this is a move that would seem to make a lot of sense for the flying Georgian attacker.

While there is no doubt that Ferran Torres is a very talented young football player it is not certain that he will succeed in Barcelona having developed into a very specific style of player whilst at Manchester City. All of the players that were brought up by xGold and included on our list would have been available for less than the €55M that it looks as though Barcelona are playing and each one looks set to have an interesting career going forward.