In football, there are some nations that excel when it comes to the development of young footballers. Whether this is due to social or cultural environmental factors or due to the facilities and level of coaching that is available to aid their development. While in some of these nations football is seen by many as a vehicle that would allow a young man or woman to escape from difficult economic conditions there are others in which football is such an ingrained part of society that it almost becomes an obsession.

Italy falls into the latter category while still remaining one of the most interesting countries in the world from a footballing development perspective. Serie A, the Italian top-flight, is undergoing something of a regeneration in recent seasons and this year in particular Serie A is the home of some of the most entertaining football in Europe. Such is the depth of talent development in Italy, however, it is common for teams in Serie A to regularly loan a high number of players to teams in the second tier, Serie B, in order to allow those players to gain game time. This makes Serie B an interesting league from a recruitment perspective as you have a mix of players in a competitive environment and while some of the younger players will be extremely talented they may struggle to break into the first-team picture at some of the biggest clubs in the country. this makes them candidates for recruitment down the line.

In this data analysis piece, I am using data profiling to identify five young players who are performing well so far this season and who have caught my eye.

Data is increasingly an important part of the recruitment process when it comes to identifying talent and signing players. It should still, however, be combined with video scouting and live scouting in order to provide a full picture of the player before a decision is made. 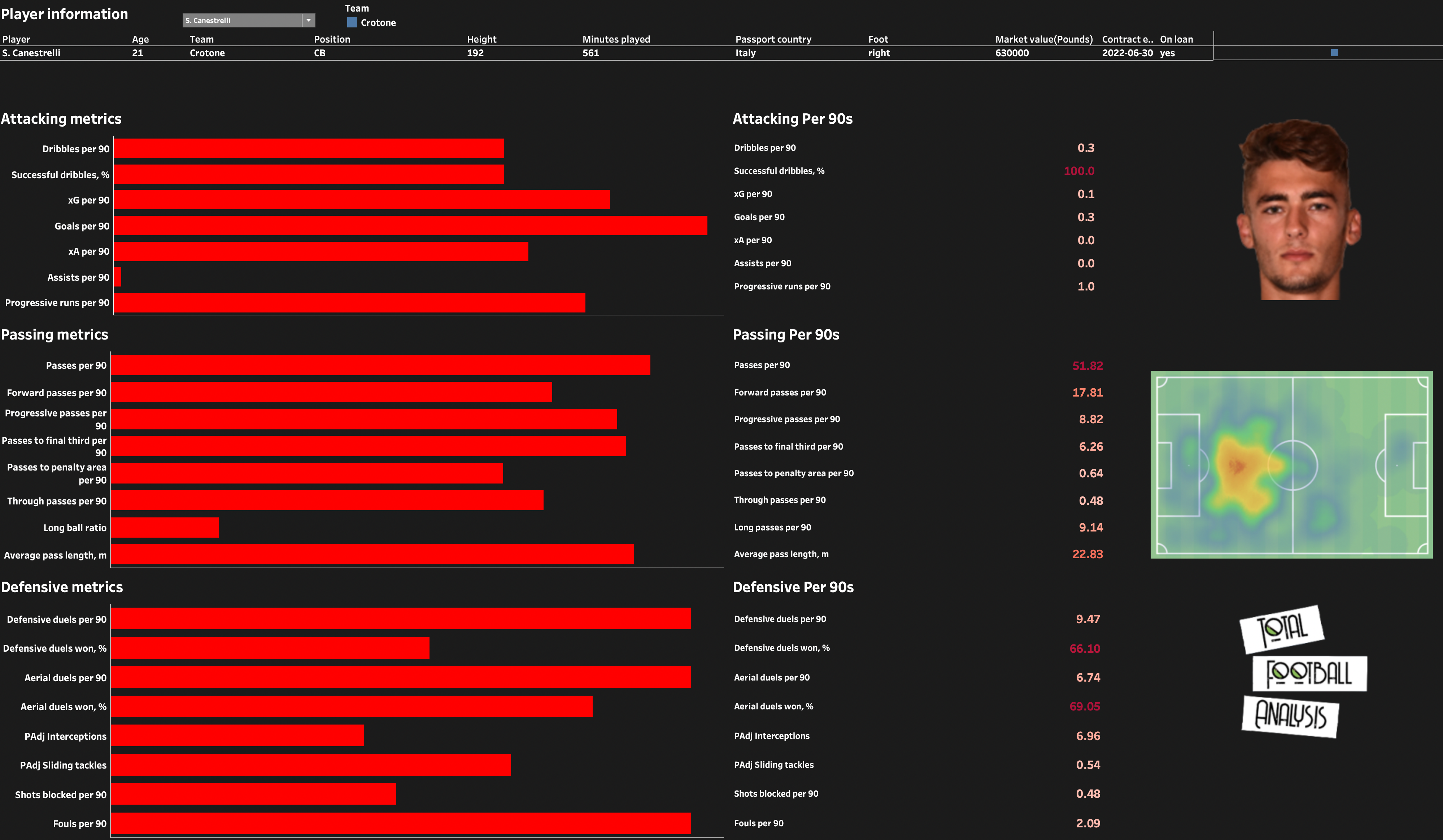 The first player on our list is the 20-year-old Italian central defender Simone Canestrelli who currently plays for Crotone although he is on loan from Empoli in Serie A. Canestrelli is a right-footed central defender although he is comfortable playing on either as the right or left-sided central defender. This season so far we have largely seen Crotone play in a 3-4-2-1- system although Canestrelli also profiles as a defensive player who would be comfortable playing in a back four as well. He is listed at 192cm | 6’4″ with an athletic build that suggests he could still add muscle to his frame.

At the time of writing Crotone are struggling as they sit in 17th place in the table although the quality in their squad suggests that they could be higher.

So far this season Canestrelli has played 561 minutes in Serie B and as you can see from the above data profile he is a well-rounded player. In the defensive side of his game, he is currently averaging 9.47 defensive duels per 90 with a success rate of 66.1%. This was combined with 6.74 aerial duels per 90 with a success rate of 69.05% and 6.96 possession adjusted interceptions. In the passing section of our data profile, Canestrelli also stands out with 51.82 passes per 90 of which 8.82 per 90 are classified as progressive passes and 6.26 per 90 are passes into the final third.

At the moment Simone Canestrelli is showing all of the signs of developing into a defensive player who is capable of contributing in Serie A and it is likely that he will return to Empoli at the end of this season.

#2 Pietro Beruatto, 22-years-old, left back, Pisa (on loan from Juventus) and Italy 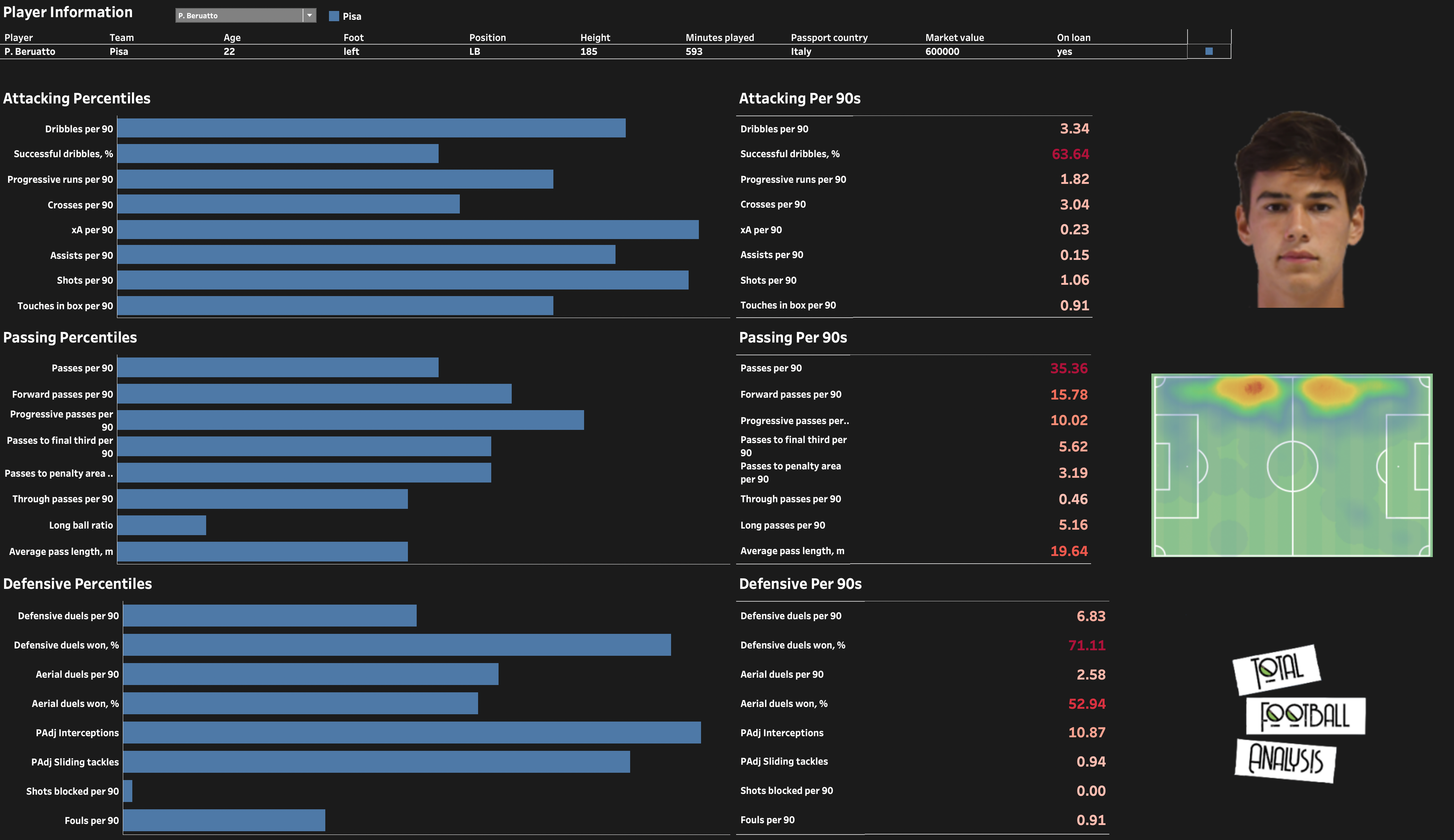 The next player on our list is the 22-year-old Italian left-back Pietro Beruatto. He is currently on loan in Serie B with Pisa from Juventus and he represents the perfect example of a young and talented player who may struggle to break into the first-team setup at his parent club and will be available for a potential transfer. He is left-footed and plays predominantly as a left-back as Pisa have preferred a 4-2-3-1 structure so far this season although he also profiles as a player who would be comfortable if he was asked to play as a wingback in a three at the back system. He is a good size for a fullback and he is listed at 185cm | 6’1″ tall.

Beruatto is another player on our list who is balanced in his outputs across the main groups of his data profile. He has, at the time of writing, played 593 minutes and he is averaging 6.83 defensive duels per 90 with a success rate of 71.11%. He also reads the game extremely well and tends to be positioned to break passing lanes and find opportunities to intercept the ball as is shown by his 10.87 possession adjusted interceptions per game. When in possession of the ball he is not necessarily a volume passer as he is averaging just 35.36 passes per 90 with 10.02 progressive passes per. 90 and 5.62 passes to the final third. In the attacking phase, Beruatto contributes well to the game with an average of 3.34 dribbles per 90 and 3.04 crosses per 90.

Beruatto will return to Juventus at the end of this season but at 22-years-old he is now at the stage of his career where he needs to start considering whether a move on a permanent basis may be the right choice. 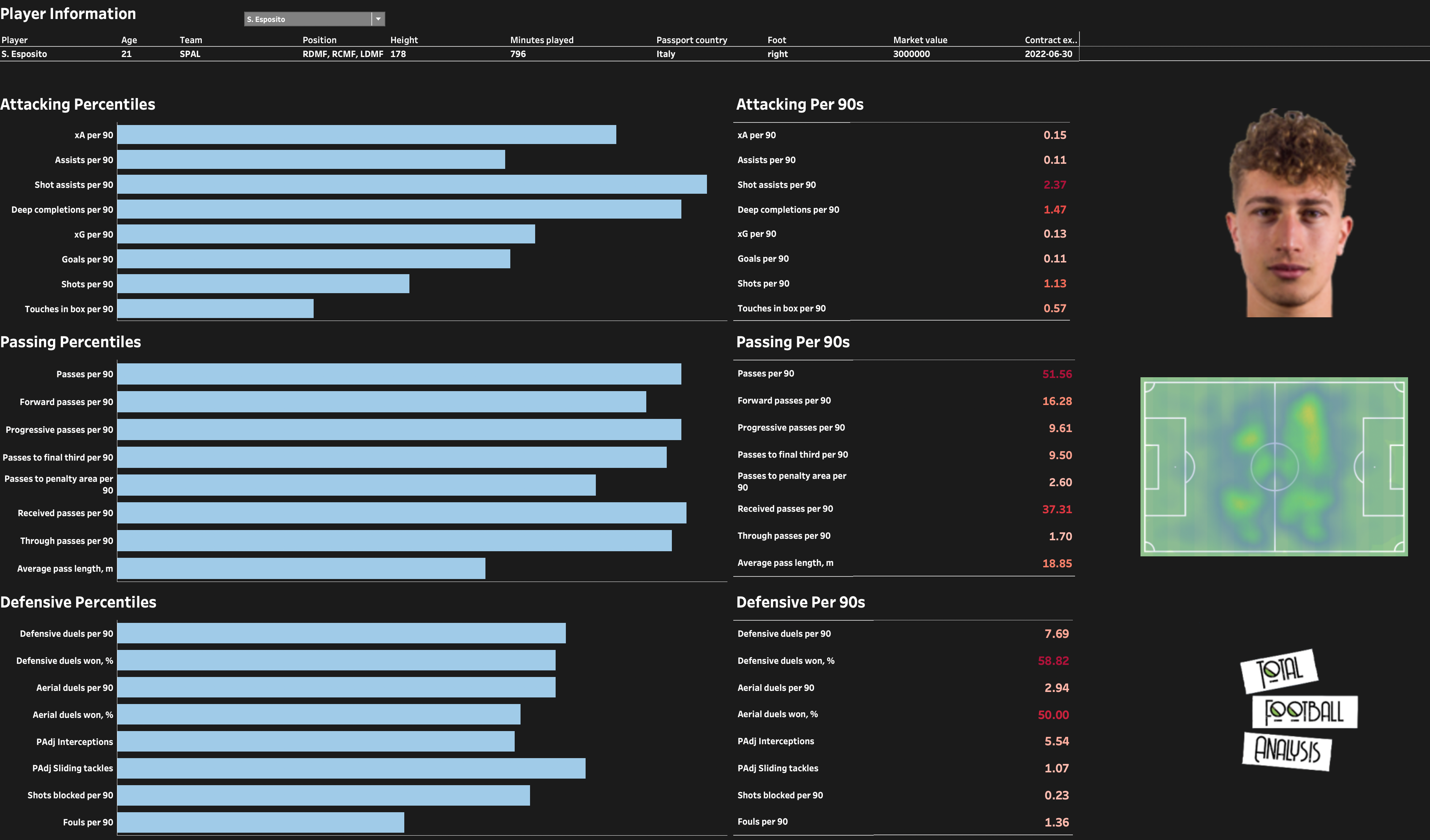 The 21-year-old SPAL midfielder Salvatore Esposito is the first player on our list who is not currently on loan from a club in Serie A. He is a central midfielder who is multi-functional and capable of playing either as an ‘8’ or as a ‘6’ in midfield areas. This season we have seen SPAL predominantly play in a 4-2-3-1 system with Esposito playing as one of the two players in the double pivot at the base of the midfield area. He is predominantly right-footed and listed at 178cm | 5’10”.

So far this season Esposito is averaging 51.56 passes per 90 with 9.61 progressive passes per 90, 9.50 passes to the final third per 90 and 2.6 passes to the penalty area per 90 he is a creative passer capable of switching the focus of attacks through diagonal passes or through vertical passes that break lines. Interestingly, Esposito has developed a threat in front of goal this season with 0.11 assists per 90 from an xA per 90 of 0.15 and 0.11 goals per 90 from an xG per 90 of 0.13. For a central midfielder to register 0.22 goal contributions per 90 at this point in the season is impressive.

While Esposito has been highly rated for some time now he is showing as being out of contract at the end of this season. 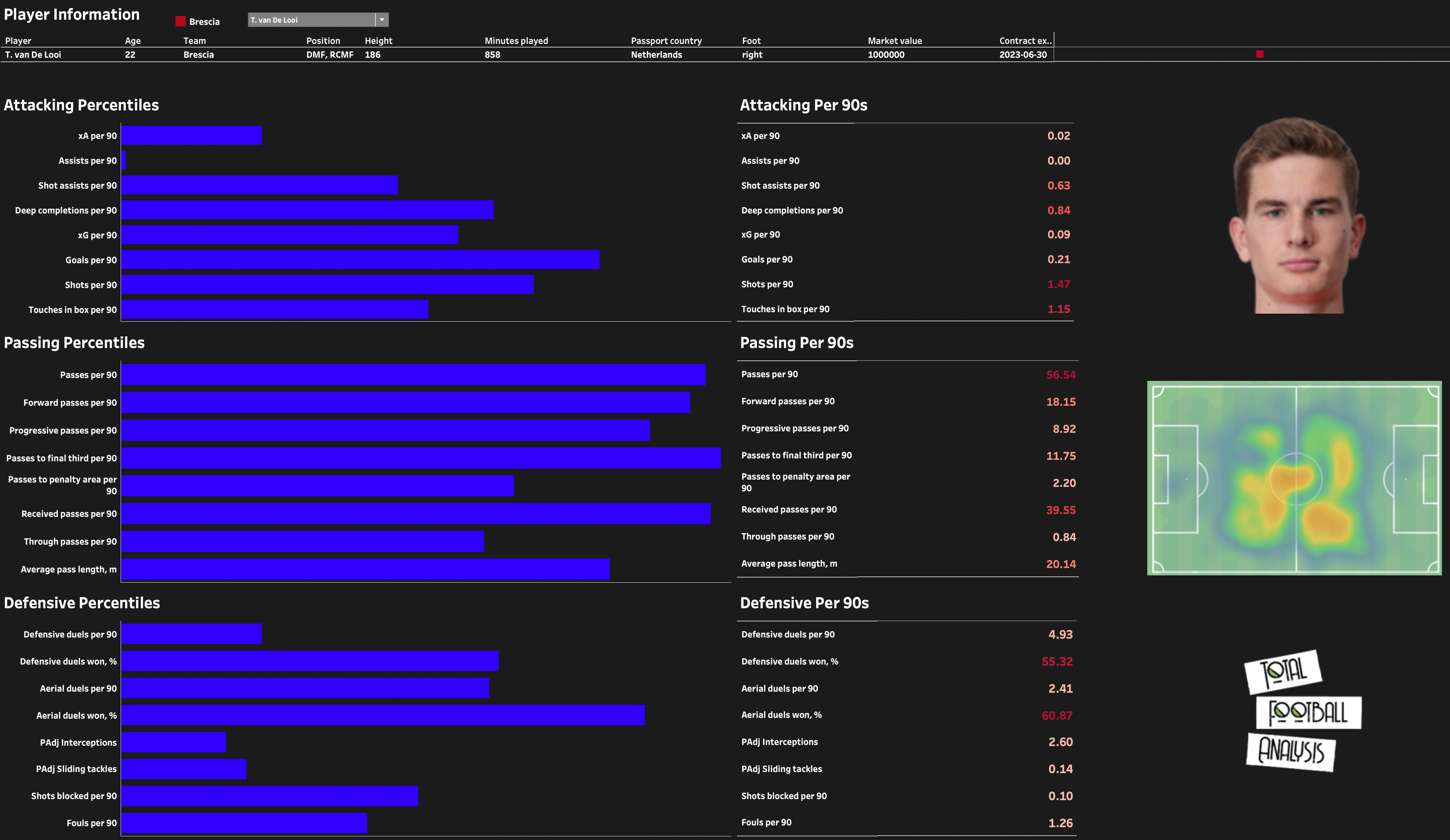 Tom Van de Looi is a 22-year-old Dutch midfielder who is currently contracted to Brescia having joined them in 2020 from FC Groningen in the Netherlands. He is capable of playing as a ‘6’ or as an ‘8’ but it is his progressive passing and ability to access the final third while in possession that really stands out. So far this season we have seen Brescia show a preference for playing in a 4-3-3 system and Van de Looi is very strong as the deeper and more pass-heavy of those two ‘8’s. He is predominantly right-footed and listed at 180cm | 5’10”.

While Brescia are performing well this season and sitting in second place in Serie B there is little doubt that Van de Looi will be in Serie A next season whether they are promoted or not. 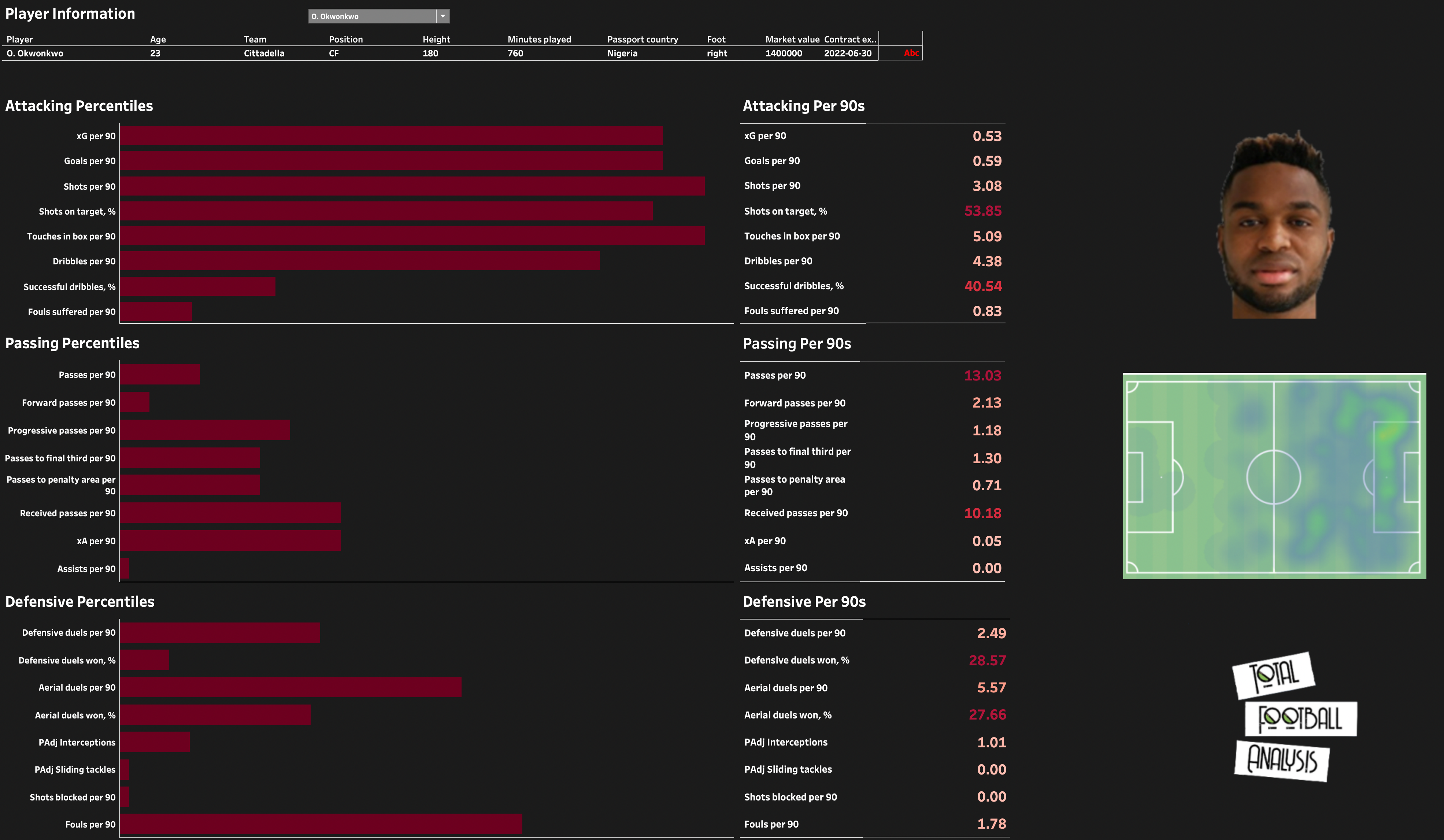 Orji Okwonkwo is a 23-year-old Nigerian attacking player who is currently contracted to Cittadella in Serie B on loan from the Serie A side Bologna. Earlier in his career, Okwonkwo was perhaps classified as a wide attacker although for the most part this season he has played as a centre forward. He is predominantly right-footed and listed at 180cm | 5’10. Okwonkwo is capable of leading the line as a lone forward where his pace allows him to threaten the space in behind the opposition defensive line although he would also be effective as part of a two where his mobility would allow him to pull wide to attack space.

At the time of writing this report, the Nigerian attacker has played 760 minutes in Serie B and his outputs are concentrated almost entirely on the attacking side of the data profile. He is currently averaging 0.59 goals per 90 from an xG per 90 of 0.53 while taking 3.08 shots per 90 with 53.85% of those shots being on target. To top off his attacking output he is also averaging 5.09 touches in the opposition area per 90 and 4.38 dribbles per 90.

Okwonkwo is the perfect example of an attacking player who is spending his time on loan developing the parts of his game that will see him become effective at a higher level.

Serie B remains a competitive and interesting league with a mix of experienced players and younger talents who are developing their abilities in an environment that allows them plenty of minutes against competitive opposition. Of the players listed those who are on loan will have to return to their parent clubs with a view to making themselves important for the first-team squad at their club. If this does not work out then they will represent interesting recruitment options going into the 2022/23 season. Lyon Feminin’s 2020/2021 season was not one they will want to remember, with PSG Feminine beating them to the Division […] 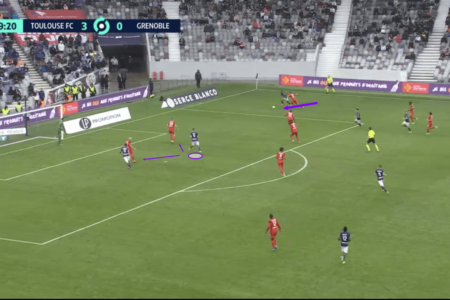