Ferran Torres: Have Valencia found the next Spanish prodigy?

Some of the greatest players do indeed only come around once every four years but that is quite literally the case for Valencia’s Ferran Torres. Born 29 February, therefore celebrating his true birthday every leap year, the Valencian native broke into the senior team in the second half of the 2017/18 season and has set about impressing head coach Marcelino with the intention of becoming a first-team regular.

Joining the youth setup aged six, Torres was identified as one of the clubs most promising homegrown talents. His development led him to a debut with Valencia’s second string at just 16 years of age. A right-sided winger, Torres began to make the position his own.

His first goal for the second-string team came in matchday two against Girona’s B side Peralada. His fantastic start to the season was interrupted by the Under-17 European Championships. Torres was an integral cog in the Spanish machine which went on to win the competition, beating England on penalties in the final after eliminating Germany and France in the knock-out phases.

Torres returned to Valencia simply oozing confidence and after just four games with the second-string side, Torres was called up to be a part of Valencia’s senior squad. Still just 17 years old, after a few substitute appearances Torres was awarded his first start on 28 February 2018. The faith in Torres was rewarded and he provided the assist for Valencia’s sole goal of the 1-1 draw away at Athletic.

Despite Torres taking his chance he would only start one more game amongst a plethora of substitute appearances, but this would lay the foundation for the Spaniard to emerge as the bright spark of Valencia’s following season.

It is fair to say that Valencia have been an inconsistent side over the last few seasons. They have failed to establish an effective style of play after the departure of Unai Emery back in 2012. The four-year stay of Emery was succeeded by a variety of managers never lasting more than one full season until the appointment of Marcelino in 2017.

Since then, Marcelino has implemented a clear style. Our own David Selini’s fantastic piece detailing his style describes the compact defending and quick counter-attacking methods being imbued into this Valencia squad.

For this it is important for players like Torres when playing on the right of midfield to move with his fellow midfielders in unison to close the opposition when not in possession. Alternatively, Torres utilises his fantastic movement and positioning when Valencia are given the opportunity to hit the opposition on the break. 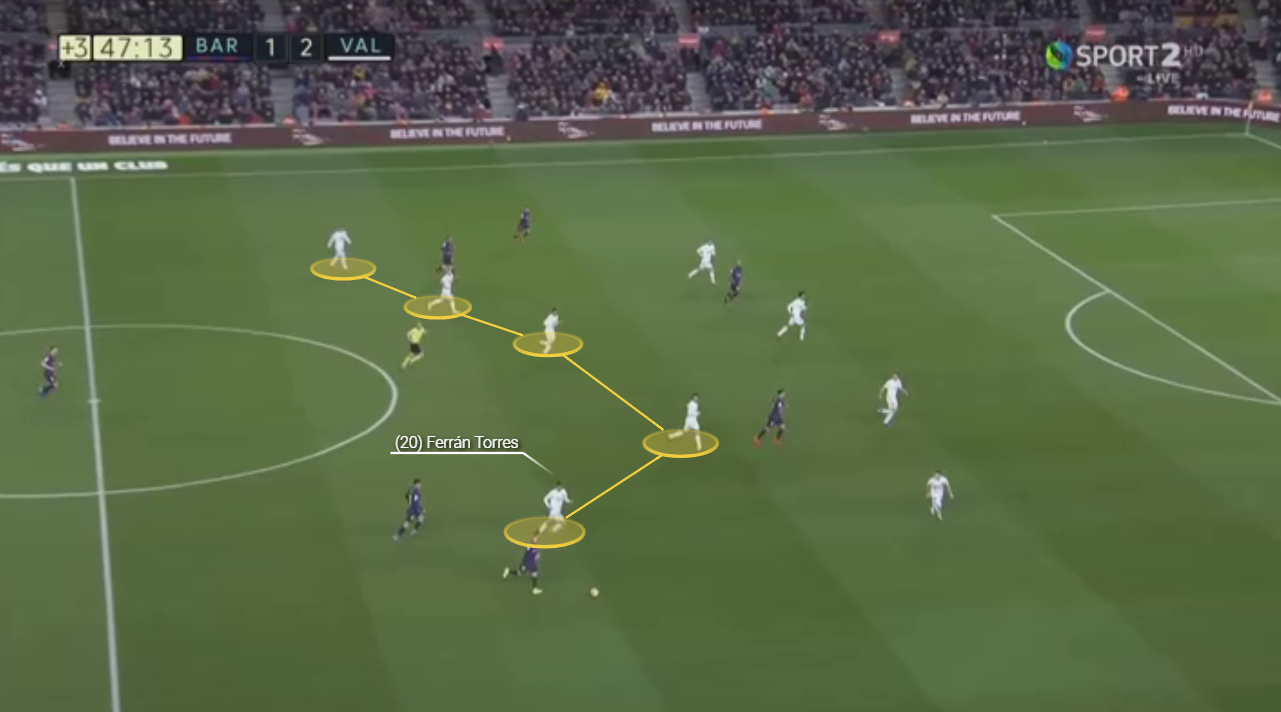 When on the defensive, one of the forwards drops back into the midfield to create a midfield five. Torres, wide left on this occasion, knows that it is his job to force the opposition player into the compacted system. 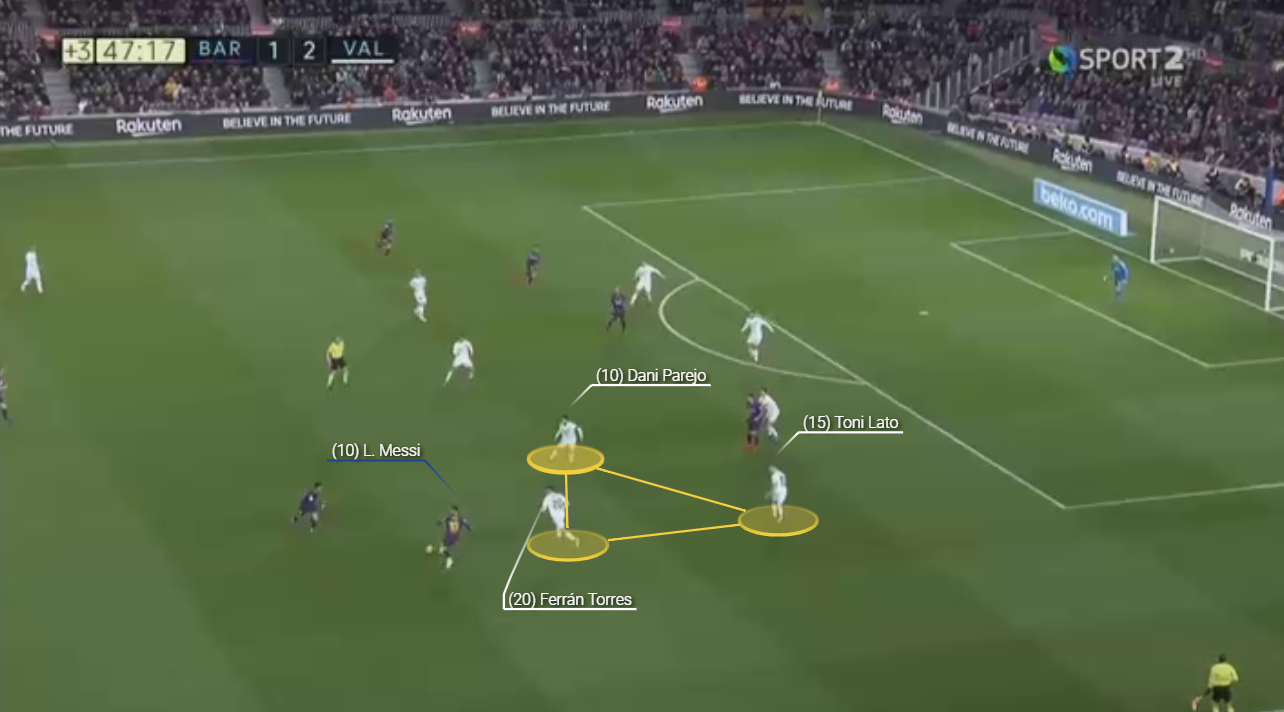 The compaction of the two midfielders, Torres and Parejo, and press from left full-back Lato, forces Lionel Messi inside. This increases the chance, however small with it being the Argentinian, of the forward making a more adventurous choice and therefore a higher chance of error. 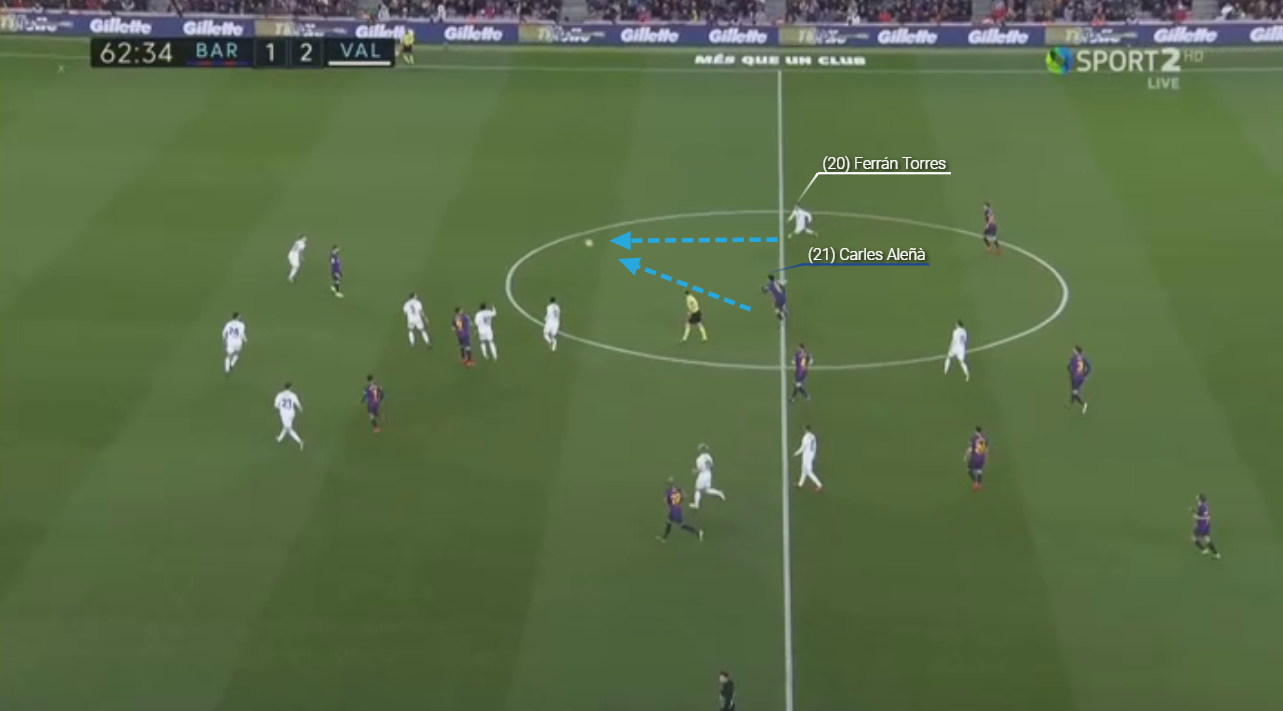 Whilst Valencia were unsuccessful in ultimately holding onto their 2-0 lead at the Camp Nou, it was the pressure onto the loose ball and commitment from players such as Torres which meant Barcelona would only manage to steal a point from the team in white.

As you can see from the heat maps above, the main difference is the beginning of the versatility to play on either flank that has shone through this season. You can also see that Torres has done most of his work on the ball close to the touchline.

Typically, you would expect this from a winger, especially one so heavily right-footed. However, use of his lightning acceleration to his advantage before using his crossing abilities combine to make him a deadly force for Valencia.

The 2017/18 season brought with it the need for fast development. To play on the right flank for a side like Valencia which relies heavily on incisive balls into the opposition box, crossing success needs to be key. Therefore, whilst a 21.5% cross success rate is common for a player of Torres’ age, it was an element of his game which needed improvement.

Moving into 2018/19 Torres clearly put a higher percentage of effort into this part of his game and it has seen a huge amount of growth. Torres is not only attempting more average crosses per match (4.3) but has also more than doubled the success rate. Half his crosses in the league have met their intended targets.

The 3-0 home win against Villarreal was completed by a pass made by Torres. With his expert vision he was able to see the run of Rodrigo, and from a reserved position on the pitch the quality of the Spaniard’s pass to meet his compatriot was sublime. 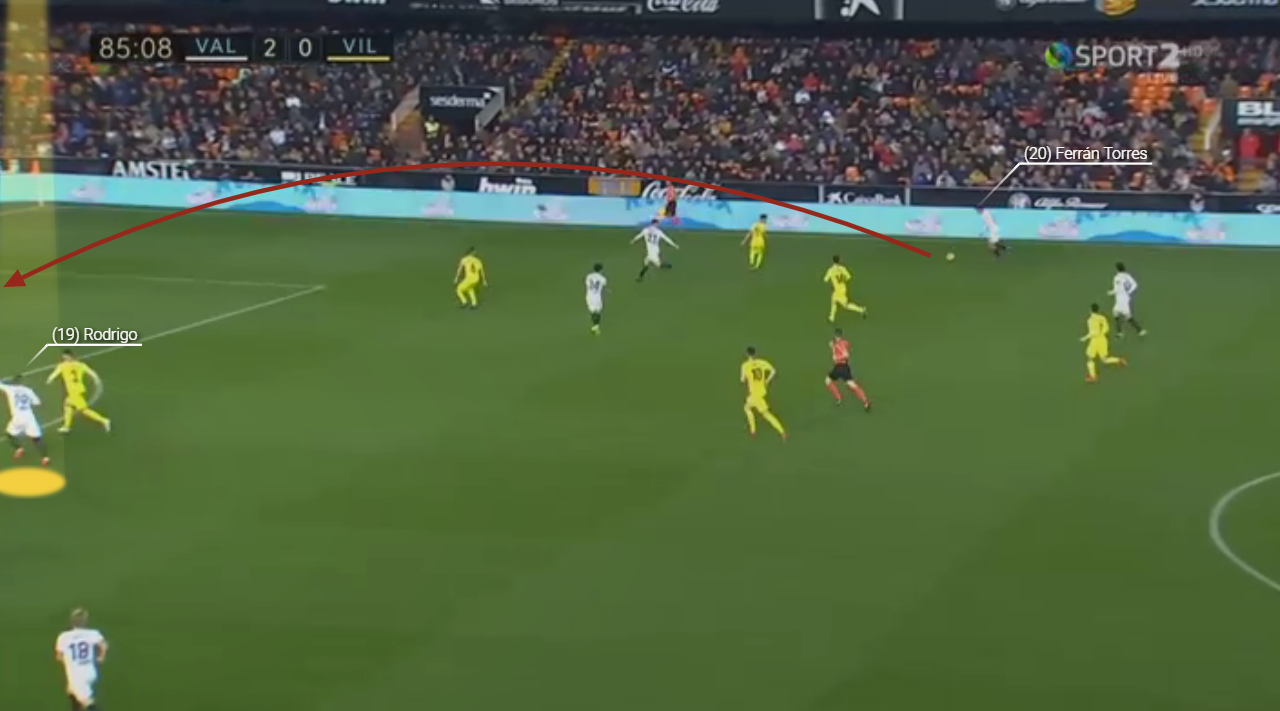 Notice how the cross must be delivered extremely early for its effectiveness and chance of conversion to be as high as possible. Torres is excellent in these scenarios and is aware of when the chance’s window is open. He executes the cross and Rodrigo’s movement away from the Villarreal defender means he’s allowed the space to arrow the ball into the bottom corner. 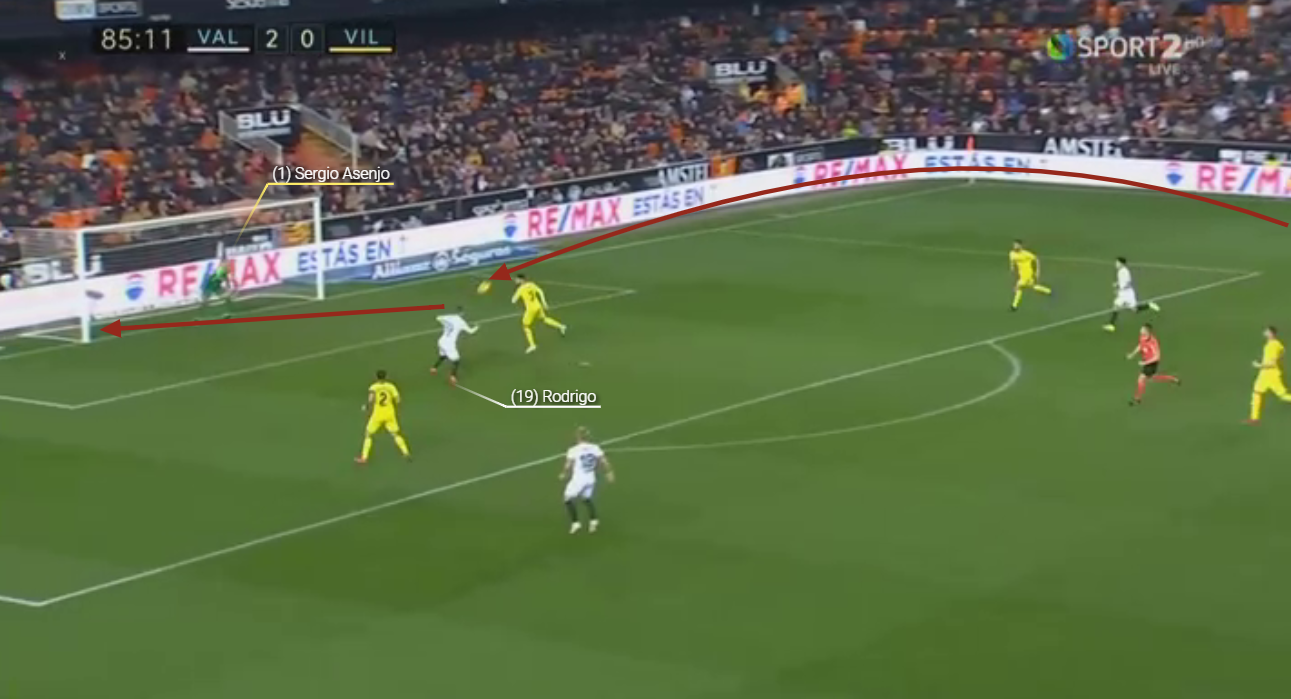 The ability for a winger to get into the correct position for crosses will rely heavily not just on the movement and creation of space to receive the ball, but the very selfish ability to drive with the ball, take on defenders and beat them.

Torres, thankfully, is an accomplished dribbler and has a whole host of tricks to delight fans and baffle defenders. However, he has an archetypal trick which he uses to great success. 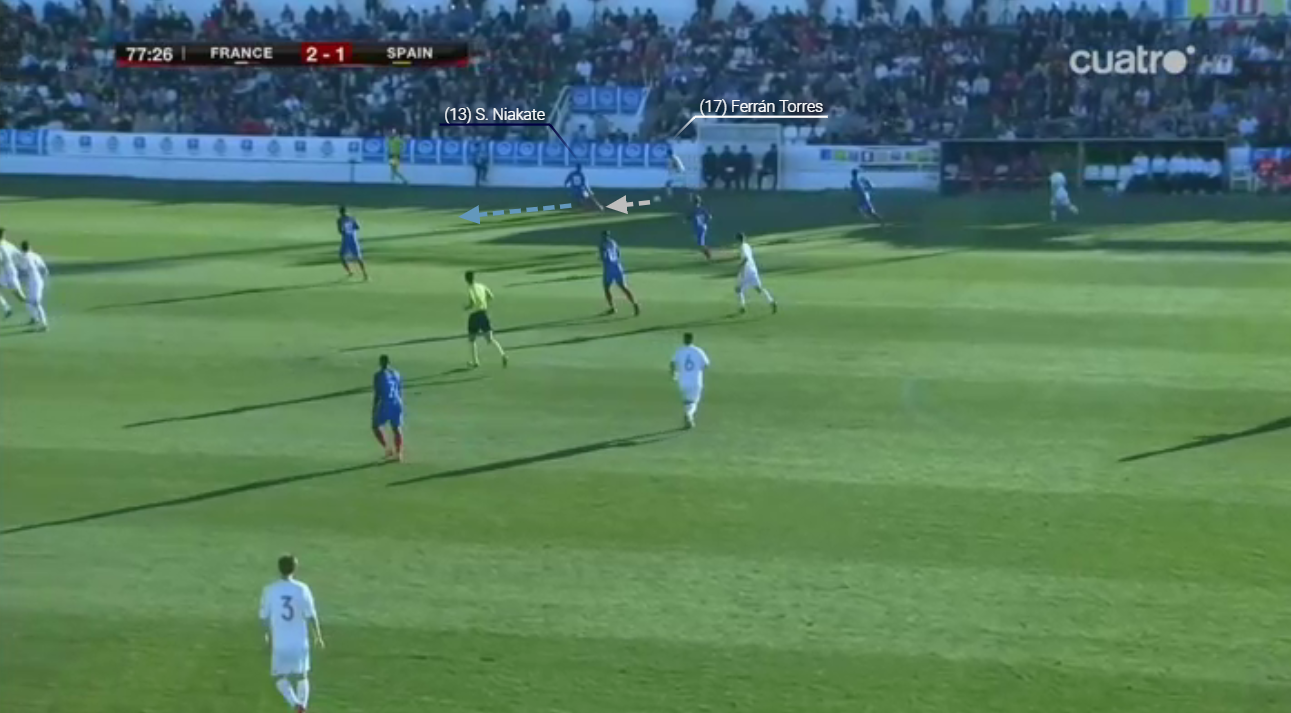 When a winger of great skill and pace looks to drive towards the opposition, its common to see defenders jockeying and retreating, biding their time before pouncing on the opportunity to steal possession. Torres uses this to his advantage. Torres does not allow the defenders time to jockey and drives directly at them before playing the ball several yards in front of him. 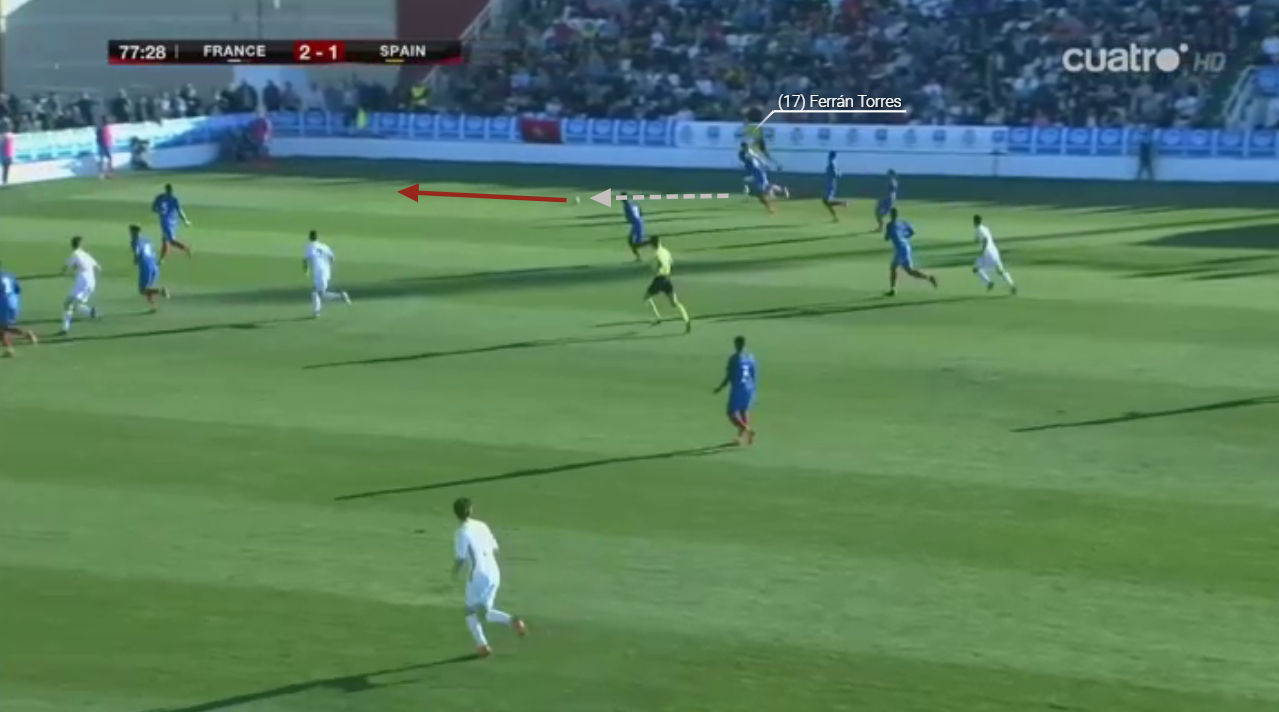 Then, using his rapid acceleration, he looks to beat defenders at will and hit a first-time cross upon running onto a pass effectively made to himself. The move is a brave one and often leads to one of three results. The first is success as shown in the images above. Secondly, the move fails, and the opposition manage to successfully prevent the move. Thirdly, the defender blocks Torres’ run and the Spaniard earns a free-kick in the opposition half. It is an effective move which over the year Torres has made his signature.

Torres has recently signed a new deal at Valencia which is no surprise considering their growing desire to see the youngster as a fulcrum in their setup in the seasons to come. The contract includes a €100 million buy-out clause. Ten years ago, that might have been a ‘impossible-to-buy’ clause but these days who knows?

What we do know is that Torres has the potential to be one La Liga‘s most creative wide players. If he can begin to increase the frequency of assists and goals to his game, in a couple years’ time there might be a hundred reasons to activate that clause rather than put teams off.