The level at which young Spanish talents need to impress season upon season in La Liga is increasing at an exponential rate. The modern era of football’s never-ending craving for the next big star is an unquenchable thirst. But Girona, the small Catalan side still a junior member of Spain’s top-flight, might just possess one of the latest in Pedro Porro.

Porro, a 19-year-old right-sided wing-back, has caught the attention of many a La Liga viewer for his eye-catching play down the right-hand side of Eusebio Sacristan’s Girona team. For a player of Porro’s age, the confidence and consistency have been the key outstanding traits of his game.

Porro is often tasked with unlocking the defensive faults of the opposition’s left-hand side and testing the back line with accurate curling efforts into the box. The effectiveness with which Porro completes these tasks is what makes him the focus of this piece.

Porro begun his youth career before the age of 10 with Gimnastico Don Benito, the local team in the town of his birth, before being signed by Rayo Vallecano. Girona quickly snapped up the Spaniard just before his 18th birthday. Porro had been approached by the likes of Real Madrid, city rivals Atletico and Bayern Munich. However, Porro made the choice to sign for the part-City Football Group owned Girona, likely due to the higher chance of first team football imperative to his development.

Porro was given opportunities at Girona’s daughter side Peralada, a club recently connected to Girona to be an effective feeder club for the top-flight side.

Under previous manager Pablo Machin, Girona deployed a back-three system with full-backs pushed further up, transforming their game into the fashion of a wing-back. Manchester City loanee Pablo Maffeo occupied the right-sided position and did so excellently. When Maffeo returned to City before being sold to Stuttgart, Girona lost a huge asset to their attack.

Not only that, Girona had lost Machin to Sevilla after a fantastic season in La Liga, former Real Sociedad manager Eusebio Sacristan was drafted in and preseason began in earnest. This is where the stage for Porro was set.

The crossing talents of the teenager are multi-dimensional. The ability to drive at a back line and cross an in-swinging ball into the opponent’s box is the most typical style we see in the modern era of football. The more technical ability to receive a pass into the body to take a first-time cross, reversing the direction of the ball, separates the average wide player from the aces.

As displayed in Girona’s comprehensive preseason thrashing of Tottenham Hotspur, Porro begins to impress Sacristan and display the technical crossing abilities of a senior experienced wide man. Receiving the ball to feet the first-time cross is timed perfectly and is put accurately into the danger area. 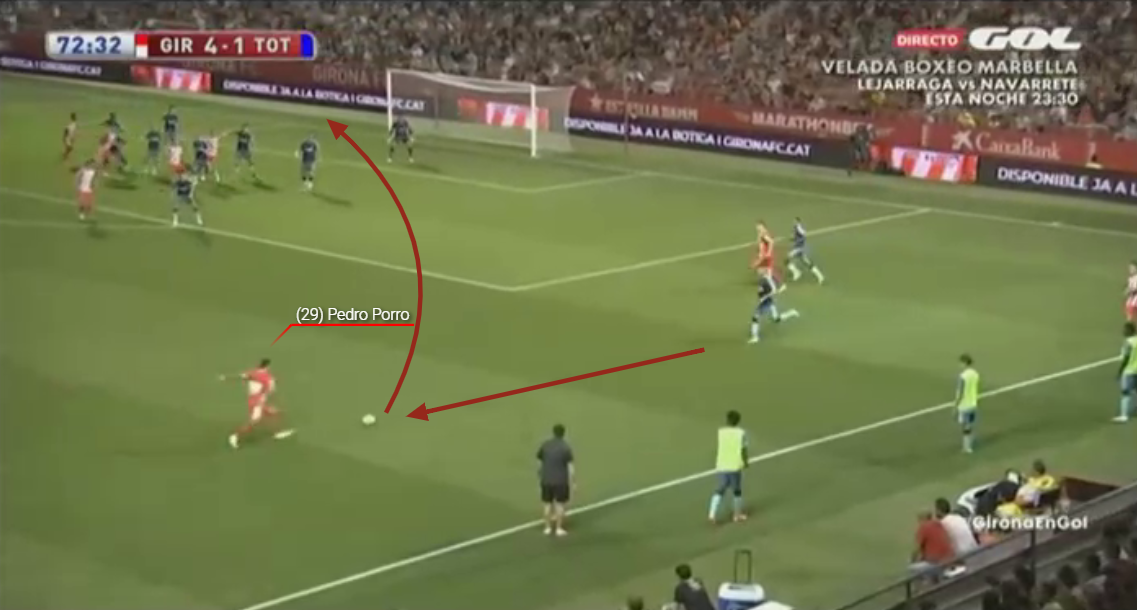 The cross was met by the Girona attack for Tottenham back-up goalkeeper Paolo Gazzaniga to tip over well. Sacristan would see this trait and confidence in Porro and it would be these showings of ruthless chance-taking from the Spaniard which would solidify his starting position in the season to come. 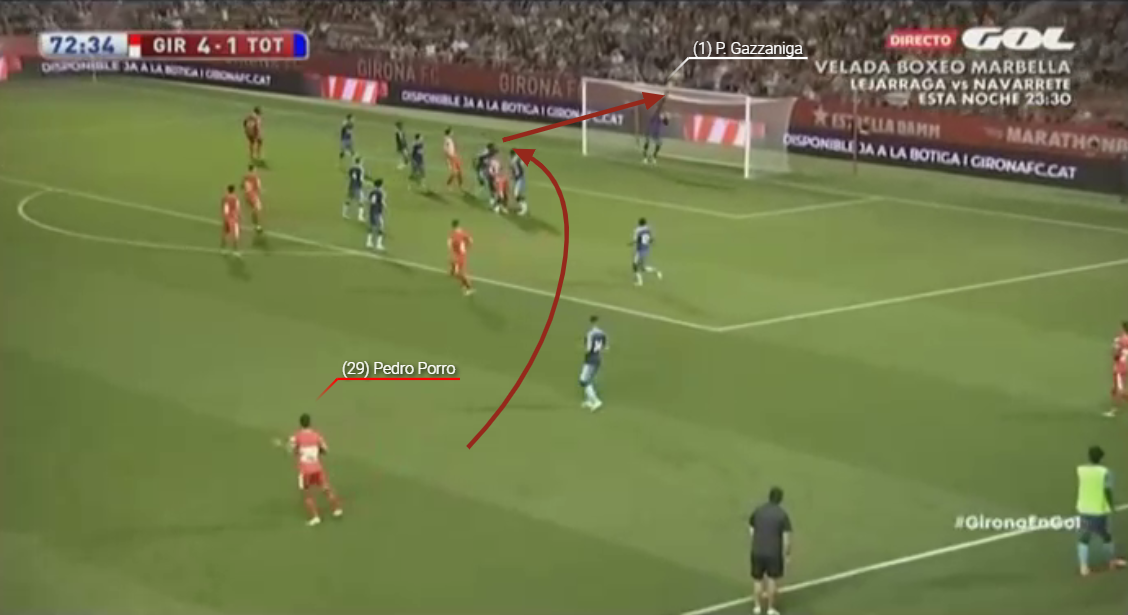 Not only is his crossing with a single touch confident, but Porro’s ability to spot a cross in the earlier phases of play before getting anywhere near the opposition goal-line is sublime. The decision-making of the youngster and initiative to attempt these early crosses with such success is a credit to his ability.

The game against Real Madrid earlier this season showed the confidence against not just any La Liga opposition, but the European Champions and a side who had previously tried to sign the youngster before his move to Girona. 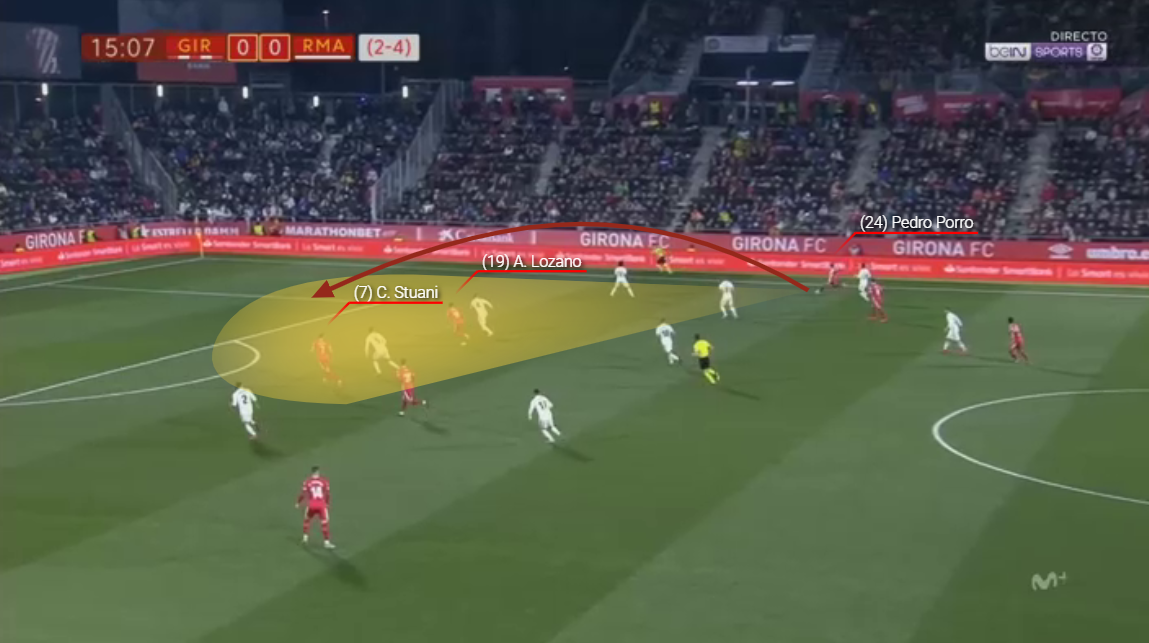 The ball swung in front of Los Blancos’ defence is pin-point to Lozano who attempts to control it. A more experienced forward in a better side would certainly prosper more so from these advanced attacking moves, further hinting at Porro’s bright and successful future.

Whilst the success rate of the crosses is just 26% at this stage, this can be explained by two reasons. Firstly, Porro is still extremely young whilst attempting plays of extreme difficulty. A higher success rate will become more regular with experience.

Secondly, his determination to attempt regular crosses in each match do make it easier for defences to predict and defend the questions Porro is asking. With experience will come the ability for Porro to make his game more unpredictable and see greater success in his attacking ventures.

To play as a wing-back requires excellent dribbling ability combined with the stamina of an Olympic long-distance runner. The heat map below shows the incredible amount of ground Porro covers on average. The intense heat you can see along nearly the entire length of the pitch shows the work rate which Porro commits to each fixture. 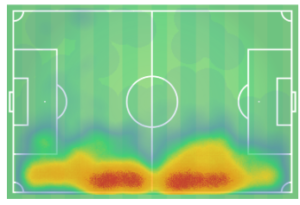 Porro is able to recover the ball in the oppoosition half with a 38.4% success rate, high for a player of Porro’s experience. This adds another impressive string to the Spaniard’s bow. With modern teams applying the high press tactic, this is a trait which will not long go unnoticed by top clubs.

Nearly 70% of the wing-back’s dribbles are completed on average. With over five attempted in each match, the confidence of the teenager is gradually becoming unrivaled with each minute he is on the pitch. 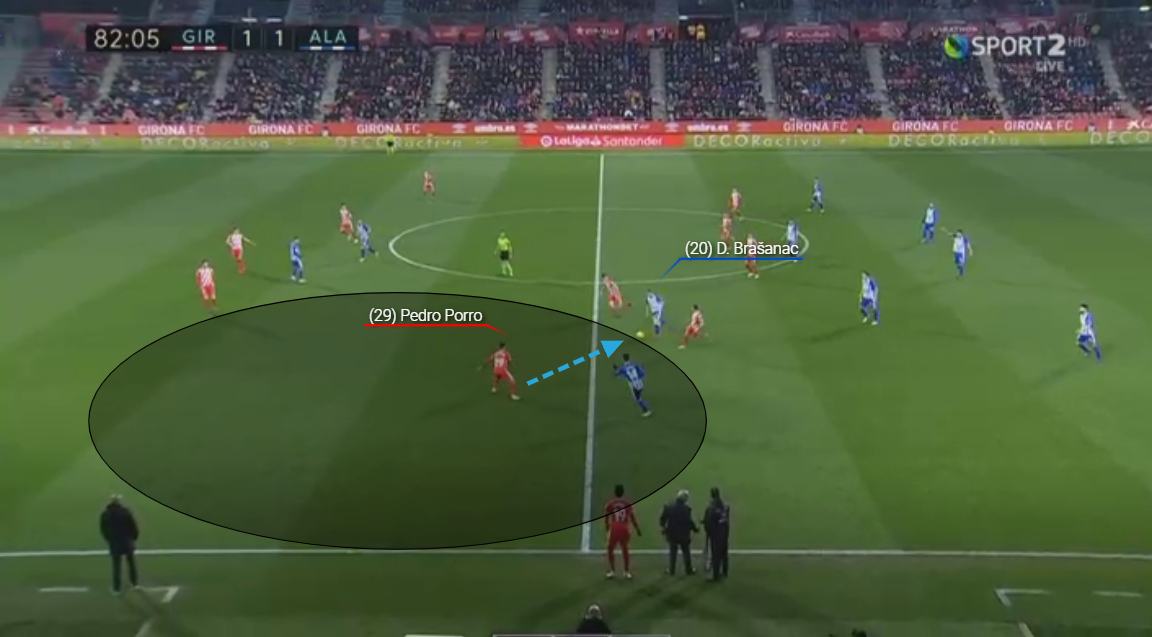 This confidence also feeds the defensive aspect of his game. With Girona’s back-three system Porro needs to be very aware of the zone he occupies, and he does this well. If an opponent moves into his zone of the field with the ball, Porro uses his acceleration to close the opponent down and either apply pressure holding his ground or attempt to make a challenge.

The weakness in his game is with the latter. The trickier, more experienced wide players in La Liga can often easily sell Porro allowing them to get a cross into the Girona box. Porro needs to become more patient with his defending because his positional awareness is strong. Improvements in the timing of his challenges and reading of opposition movements will upgrade him to an overall top-class wing-back. 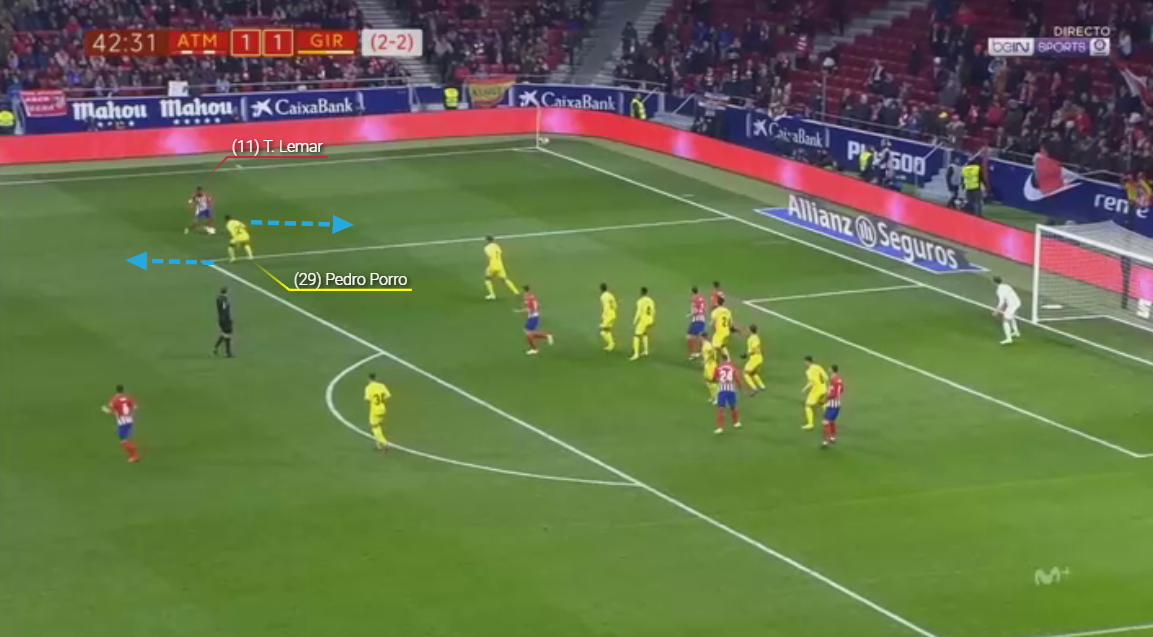 Although Girona were able to grab Porro’s signature, he is not yet out of the claws of Europe’s biggest clubs. The likes of Barcelona and Real Madrid were sniffing around Porro once again last summer. If the Spaniard’s performances continue through this season, it is likely that come the summer of 2019 he will be top of their wanted lists once again.