Last season was something of a transitional year for Sevilla. They were still coming to terms with the loss of their excellent sporting director Monchi, who left to join Roma in Italy, and the coaching situation at the club was uncertain with both Eduardo Berizzo and Vincenzo Montella taking the reigns at the club and failing to impress.

This resulted in a 7th place finish as the club finished below city rivals Real Betis for the first time in a number of seasons.

This summer has seen the club move to address these issues with the appointment of a coach who impressed hugely in La Liga last season, Pablo Machin of Girona.

Machin has limited experience of coaching at the top level but his eye for detail and ability to organise his side tactically saw his Girona side finish the season in 10th place, no mean feat given that they had been tipped for relegation prior to the season. During the season Girona saved their best performances for the best sides in La Liga with matches against Atletico Madrid and Real Madrid, in particular, standing out as examples of a well-conceived and implemented gameplan.

Under Machin last season Girona were resolute and hard to beat with a 3-4-2-1 system that would become a 5-2-2-1 out of possession. They defended from a low and compact block that looked to suffocate the central areas to deny the opposition space to play before attacking through lightning fast transitions.

Whilst that gameplan was effective for a side looking to survive relegation it is unlikely that the fans of Sevilla will be happy to see their side play from the back foot in quite the same manner. To this point this season we have only seen Sevilla in serious competition twice as they have overcome the Hungarian side Ujpest 7-1 on aggregate in the early stages of Europa League qualifying. These matches have given us an early indication as to what to expect from Sevilla under Machin this season. 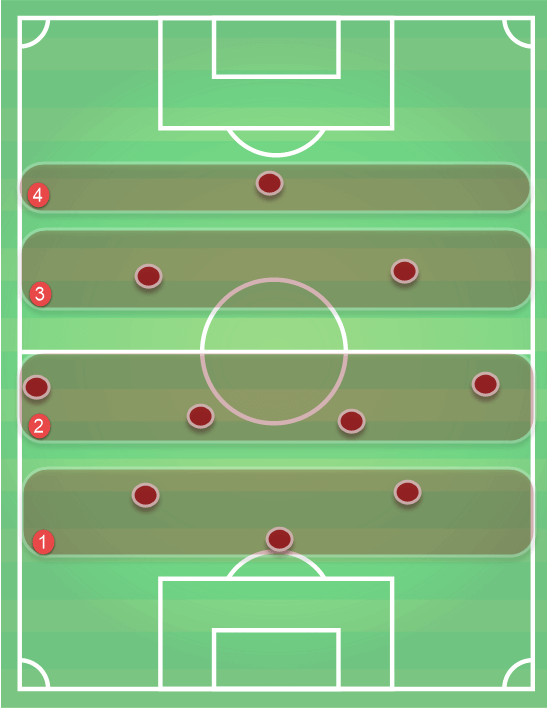 Early signs are that Machin will take his tactical structure with him to Sevilla with both competitive matches to this point seeing them line up with the same 3-4-2-1 system that served Girona so well last season.

The back three for Sevilla to this point have perhaps enjoyed more time in possession than we saw with Girona last season but this is to be expected with the jump in quality of players between Girona and Sevilla. With more high-quality players at his disposal this season we could well see Machin evolve his own playing style to become a more progressive and attacking coach.

The structure itself is set in four blocks with the defensive line being one and shielded by the second block comprising the wingbacks and deeper central midfielders, at Girona these central players were purely defensive in outlook although given the quality of the Sevilla squad this could well be made up of players like Ever Banega, Roque Mesa, Steven Nzonzi and new signing Ibrahim Amadou all comfortable in these areas. The third block is the two more offensive central players, so far this season Pablo Sarabia and Nolito have played here and thrived in the spaces that are created in the attacking phase by the vertical passing and movement of their teammates. The fourth and final block is the lone striker with Wissam Ben-Yedder looking like the favourite for the role at the moment.

So far, with a limited sample size, Sevilla have excelled under Machin in the attacking phase with one of the most impressive aspects of their play being the way they use high and low movement in the final third to overcome marking structures from the opposition defence. 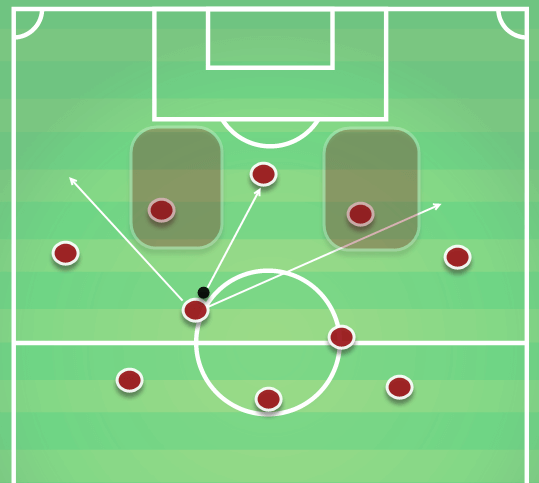 When in the attacking phase we have seen Sevilla transition into an attacking block of five players stretched out across the defensive line. With the wingbacks advancing forward they occupy the wide area and stretch the opposition defensive structure, this, in turn, creates space in between the defensive structure that can be occupied and exploited by the central attacking midfielders and the lone striker.

For the most part, we see the man in possession play out to the wide areas or into the central forward with the advanced central midfielders then looking to join in and support in the attacking phase.

Here we see an example of Sevilla in the attacking phase as they look to find a way to bypass the opposition defensive structure to create a chance. With the central midfielder in possession of the ball, there is a pair of mechanised movements that allow the pass to be played over the defensive structure. The first movement saw Pablo Sarabia move from a high position to a low position on the field as though he was offering a passing option, this movement took the attention of the defenders and allowed Jesus Navas to make a quick, high movement on the right to move behind the opposition.

A quick and well-timed pass over the defensive structure allowed Navas to move in on goal and eventually to score.

Another example taken from a recent Sevilla match shows the structure from Sevilla in an established attacking phase. The wingbacks are both high and wide with the advanced central midfielders taking up dangerous positions between the defensive and midfield lines of the opposition.

This positioning from the midfielders is hugely dangerous to the opposition as they allow Sevilla to play into space in front of the defensive line before looking for a pass that will penetrate the defensive line.

That is what we see in this case with the first pass into the central attacking midfielder before the second pass plays the left wingback through and in behind the defensive line.

The key movement in the final third so far this season under Machin revolves around the creation and the exploitation of triangles in the passing game.

The attacking structure under Machin forces the opposition defensive structure to be reactive through quick vertical movement or passing. This flattens the defensive unit and allows for quick triangles and through balls in order to play into the final third.

The true picture of Sevilla in the defensive phase under Machin has yet to be seen this season in competitive action. For too long Sevilla have been attractive in the attacking phase and porous in the defensive phase. A combination that has led to a less than impressive league performance in recent seasons.

Given that the shape and structure of the attacking phase has mirrored that which we saw Machin favour at Girona it is perhaps possible for us to work on the assumption that the shame, structure and responsibilities in the defensive shape will also be the same. 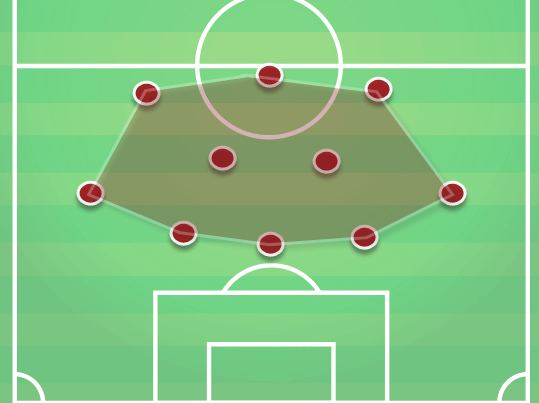 The above is a graphic showing the shape from Girona last season in their defensive phase. The main difference that we will see from Sevilla will come with the deeper midfielders, whilst Girona favoured purely defensive players in these roles Sevilla will have more ball orientated players here. Their instructions and roles defensively should be similar with the closing down of passing lanes in central areas their key instruction.

The wingbacks will fold in to create a back five with the three central defenders with the chain of five making it increasingly difficult for the opposition to find gaps to play through. The two more advanced central midfielders will press situationally with the lone striker to disrupt the attacking movements of the opposition.

It is still very early but so far it looks as though Sevilla have made a positive appointment in the Spaniard Machin. Whilst he may still be inexperienced at this level we have seen time and again that experience should not be a barrier to success in coaching.

With a higher level of player at his disposal, the appointment of Machin should allow the coach to prove his ability over the course of the upcoming season.

If you enjoyed this piece, then take a look at our analysis of how Barcelona can evolve this season and our analysis of what to expect from Julien Lopetegui at Real Madrid.