Manchester City hosts Chelsea on Sunday in a game equally important for both teams. On one side, the Citizens are need points to keep up with Liverpool in the title race. On the other, Chelsea desperately need a top-four spot so they can reserve their place in European competition.

After a surprising defeat by Newcastle that almost ruined their plans, Pep Guardiola‘s side quickly got back on track with six points from their last two games. Chelsea’s performance has been more inconsistent lately with the team lacking a leading figure in every line on the pitch.

However, this game might be a bit different, thanks to Gonzalo Higuain‘s arrival. Maurizio Sarri made sure to strengthen the team’s strike force during the January transfer window. In came a pure striker that Chelsea’s squad needed given the departure of Alvaro Morata and Olivier Giroud’s loss of form.

This move boosted the Blues’ confidence. After a embarrassing 4-0 defeat by Bournemouth, they got back on track with a 5-0 win over Huddersfield in which the Argentinian scored twice. But will his arrival be enough for the team to get anything out of the City clash?

“As you have seen in the last match, Eden passed the ball very often to Gonzalo, they speak the same language with the ball, and so I think that Gonzalo will be very important for us.”

That’s what Sarri said after the win last week. But let see how Chelsea’s game improved thanks to him. After sending 11 shots towards Bournemouth’s goal with seven of them being on target, the Blues doubled up that number against Huddersfield. The result was seven shots on target again, but their overall attempts were 21.

Another result of having someone highly positioned in the oppositions’ half is the increased numbers of offensive duels and corners. The team had 11 corners, their highest number in recent games.

The main difference in Chelsea’s style of play, though, is Hazard’s freedom. He is an amazing player on his own, but once he had Higuain’s support in the final third, he was able to do what he does best: pass, dribble and deliver. He dribbled successfully 14/15 times which in turn led to more offensive duels won (17/25). Five out of his six passes delivered to the final third were accurate. He also boasted 100% accuracy when it came to passes to the box (7/7).

With the ex-Juventus player operating more centrally, Hazard has more freedom to go back and pick up the ball, using his passing abilities. This would be extremely helpful in the build-up phase as this would create more space on the flanks for full-back Marcos Alonso to operate in. 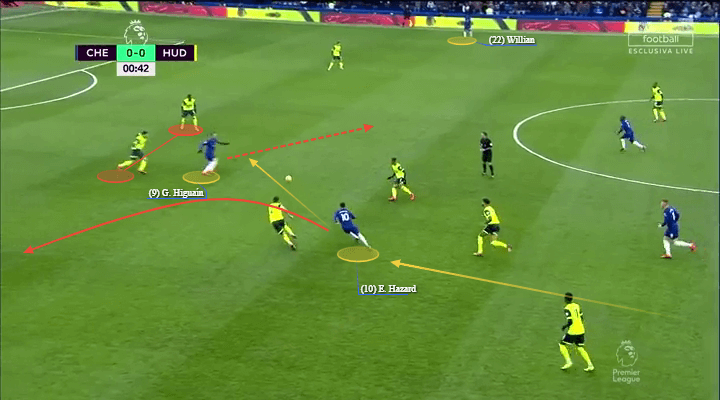 In the picture above you can see Hazard picking up the ball and sending it to Higuain with a one-touch pass. The Argentinian immediately engages the central defenders whilst Hazard is on the left flank. 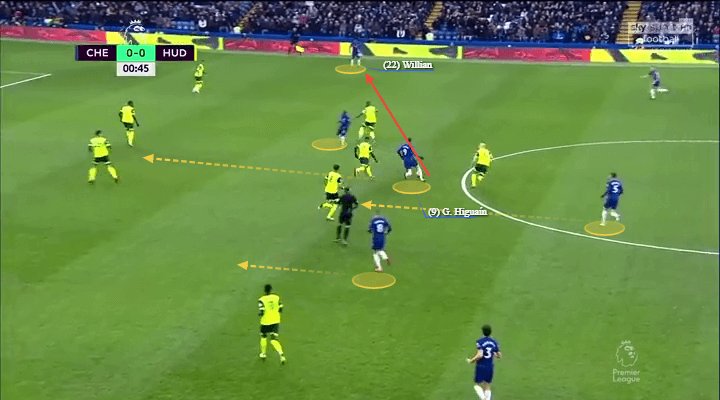 Then after dropping back with the ball, Higuain spread it out wide to Willian to escape the overloaded midfield area. Once Willian took control on the right Higuain started his movement back to the final third next to Hazard. In these situations, having Alonso further up the pitch gave the Belgian some freedom to cut inside and create goalscoring opportunities.

That is in Kyle Walker’s area which was a great advantage for Chelsea. His average rate of defensive duels won is 28.6%, and he loses the ball in his own half quite often. This, combined with Hazard’s dribbling skills, might cause some defensive problems for the Citizens. 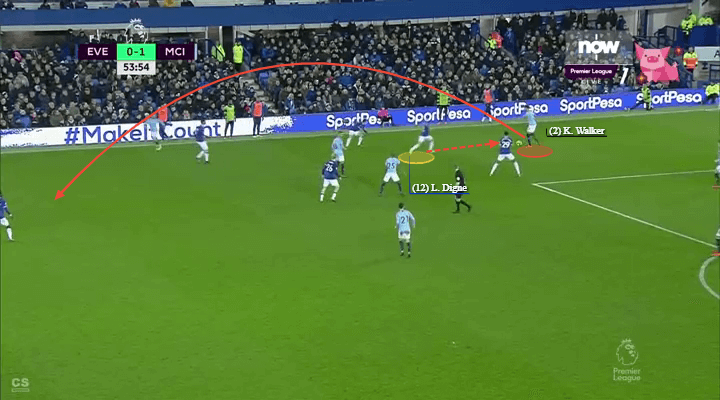 Walker’s decision making under pressure is not his best quality. In the picture above, seconds after City gained back the possession, Walker felt pressured by Lucas Digne and went for a long ball to Aguero who was patiently waiting midway so the team could counter-attack. 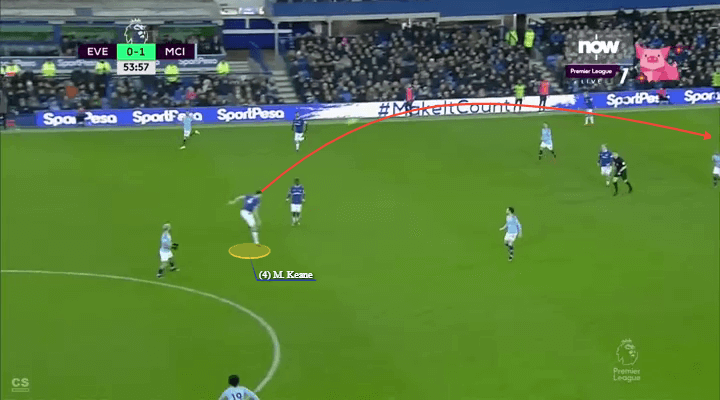 The pass’ accuracy wasn’t perfect though, and the ball ended up right on Keane’s head. The England international regained possession of the ball by sending it straight into the box where there was plenty of space for action at the same moment.

Chelsea could also try to offset City’s transitional play by closing the passing lanes using some support from Higuain dropping a little deeper in the central areas. This way one of their key players, Fernandinho, who is responsible for most of the team’s forward passes would be forced to seek other options.

Although Higuain is not known for his efficiency on the ball, with the striker on board, the Blues would be able to apply more pressure on the central defenders, without risking being exposed in the wide areas. This might turn out to be crucial for City’s build-up as they would experience difficulties in delivering the ball further. 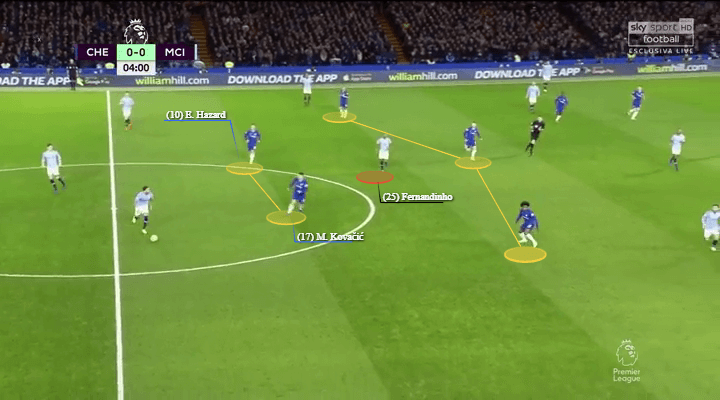 In their previous meeting, Chelsea’s players tried to block access to Fernandinho. City struggled to build up from the back as their defenders needed to seek other passing options. Of course, there is a way of City preventing this by simply dropping Fernandinho back as a support to the back line.

Against Arsenal last week, the team used a different strategy. The Brazilian started as a part of the back four next to Otamendi, with Ilkay Gundogan in front of them. Upon gaining back possession he would enter the central area and operate between the lines. He was often unmarked due to the overloaded midfield. These actions might be used against Chelsea too in pursuit of engaging the central duo and opening the half-space channels for the wide players to take advantage of. 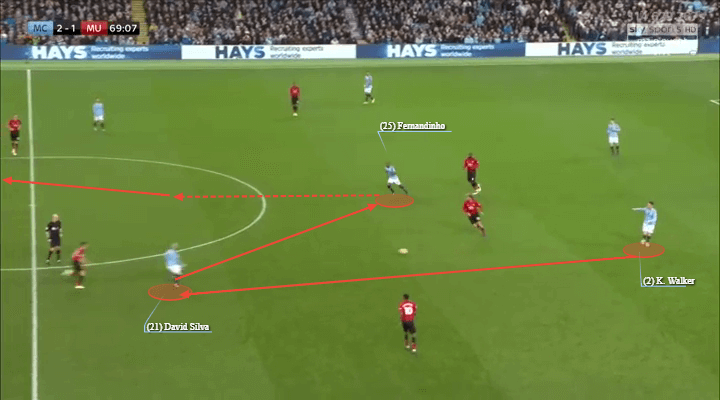 In the picture above you can see that United failed to block the passing lanes and Fernandinho had too much freedom in the central area. This allowed him to receive the ball and then send a perfectly measured through-ball, which is actually one of his best skills.

Although the difference in their form and squads might place City as favourites in this game, Chelsea might have their own ways of making life harder. The presence of Higuain as a huge support to the key player Hazard would guarantee more opportunities for the Londoners. As I already mentioned the most obvious key to success is blocking the passing lanes and limiting Fernandinho’s space for action. If they fail to do so, he might turn into City’s ticket to the three points.