With just one win in their previous 10 league fixtures, Hoffenheim had slipped to ninth position in the Bundesliga before this game. Their poor spell had left them eight points off the Champions League spots, with Julian Nagelsmann’s future club RB Leipzig currently occupying fourth.

Hoping to turn around their own form, relegation-threatened Hannover were the visitors on Saturday. Despite having different ambitions, both teams went into this clash desperate for points in their bids to turn around their respective campaigns. Perhaps unsurprisingly, the home side came out on top, recording a 3-0 victory. This analysis will dissect how Hoffenheim managed to return to winning ways.

As per usual, Nagelsmann’s side lined up with three at the back. Kerem Demirbay and Nadiem Amiri were deployed at the base of the midfield, but both had license to roam between the lines at different times. The positional play of the front three was fluid, and formed in accordance with where the space was at any given moment in the game. Wing-backs Nico Schulz and Pavel Kaderabek provided most of Hoffenheim’s width. 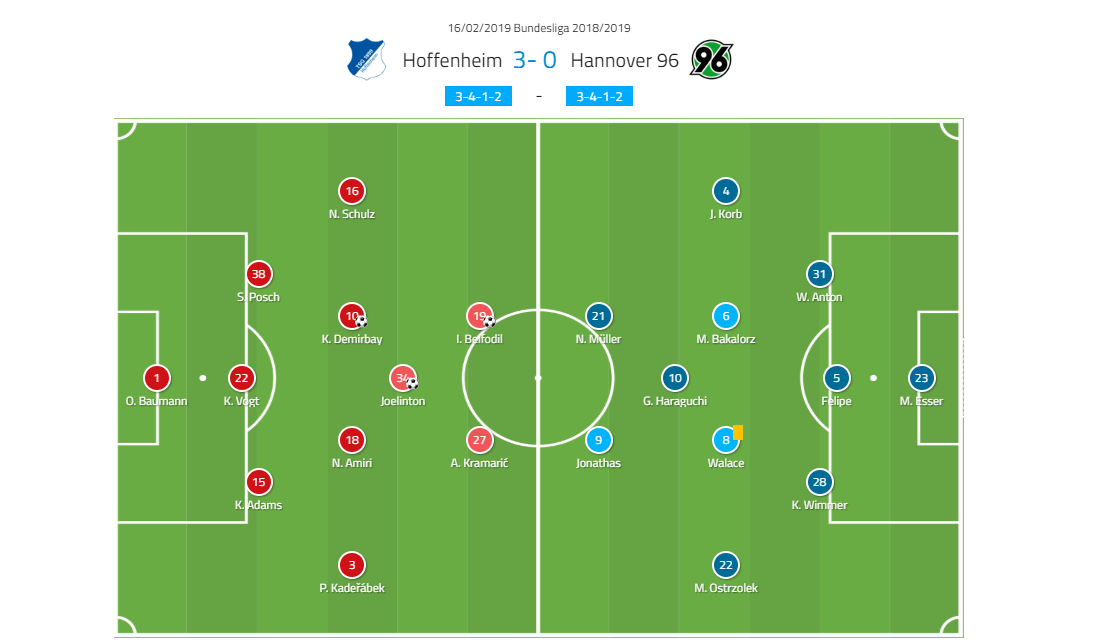 Hannover matched the home team’s formation, with a midfield duo of Marvin Bakalorz and Walace flanked by Julian Korb and Matthias Oztrzolek. Genki Haraguchi was deployed behind the strike force of Nicolai Muller and Jonathas. Former Tottenham centre-back Kevin Wimmer lined up on the left side of a back three.

With the away team committed to building from the back, Hoffenheim deployed a high-press to prevent clean progressions from the first phase. They combined man-orientated pressure with angled approaches to shut off the route for an out-ball. The image below shows Nagelsmann’s attack pressing from the front in the opening seconds of the game. The goalkeeper is forced to play a hopeful long ball, with no short-passing options available. 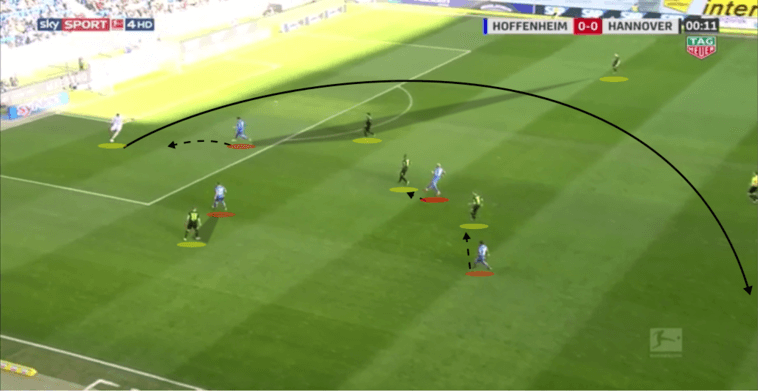 Despite the obvious risks attached to playing out against pressure, Hannover continued to try to build through the thirds. Hoffenheim also continued with their approach, with the attackers all retaining access to a man while blocking off potential passing lanes. As well as forcing them long, they were able to force mistakes.

The image below shows one such occasion. Far from his goal, keeper Michael Esser attempts to build down the left. Hoffenheim’s aggressive pressing forces a turnover in a promising scenario. However, they were unable to capitalise. 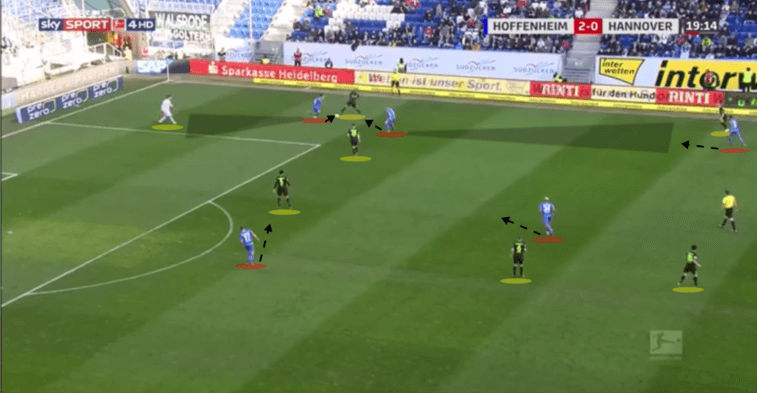 Even after securing a two-goal lead, Hoffenheim persisted with pressure, but were admittedly more measured in their approach as the game went on. During the second half, they regularly allowed Hannover to progress to the half-way line. Along with attempting to force the play out wide before closing out the space, they also pressed on triggers.

Often when the away side moved the ball backwards, a Hoffenheim player would press to force them further back, or to recover possession. In the instance shown below, Schulz leaves his position at left wing-back to press following a backwards pass by Hannover. The German manages to dispossess the centre-back before combining with Belfodil. Once through on goal, he is met by the proactive Esser, who saves well to prevent a third. 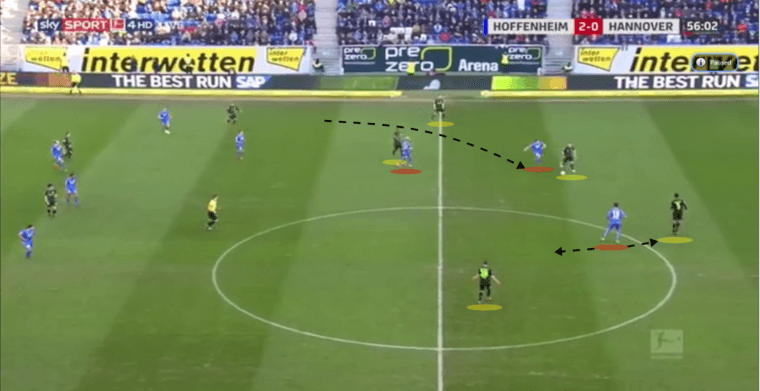 Hoffenheim were also excellent at collapsing in on the ball to retrieve possession on the occasions where Hannover had progressed into the centre of midfield. Furthermore, their counter-pressing proved effective right until the end of the game, aided by the introductions of energetic duo Leonardo Bittencourt and David Otto.

Progress into the attacking third was rare for Hannover. They usually targeted the space behind Kaderabek whenever they could. A combination of quality pressing strategies from Hoffenheim and inconsistent combination plays from Hannover meant the away team could only muster up one shot on target all game.

Overall, the home team were the dominant side throughout, enjoying 61% of possession. For much of the game, the task was to break down Hannover’s defensive unit. As is normally the case, Hoffenheim were versatile and adaptable with their approach to building the play.

With Kevin Vogt at the base of the back-three, they looked to move the ball horizontally across the first line, shifting the opponent’s shape in the process. In midfield, Demirbay and Amiri had fluid roles, moving to find space and creating passing lanes through decoy positioning. Vogt was so often the orchestrator of their attacks, either feeding the next line, or bypassing the midfield to supply the front three.

A prominent feature of their game was to progress via the half-spaces, which were usually open due to Hannover’s narrow two-man midfield. Who received in these spaces varied throughout, with Kramaric, Amiri, Demirbay, Belfodil, and Kaderabek all taking turns. The image below shows Kramaric dropping off to receive from Vogt, whose pass is ushered through by Demirbay. The Croatian attacker can then carry the play into the final third before combining with his fellow strikers, or moving the ball out wide. 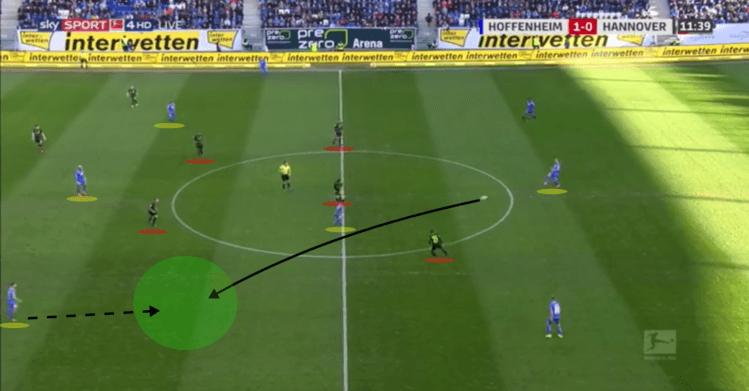 In order to cope with this issue, Hannover often dropped playmaker Haraguchi onto the base of the midfield to follow Demirbay, allowing Bakalorz to move out to cover the half-spaces. However, Vogt was also capable of cutting through the trio with direct passes to Belodil and Joelinton, as can be seen below. 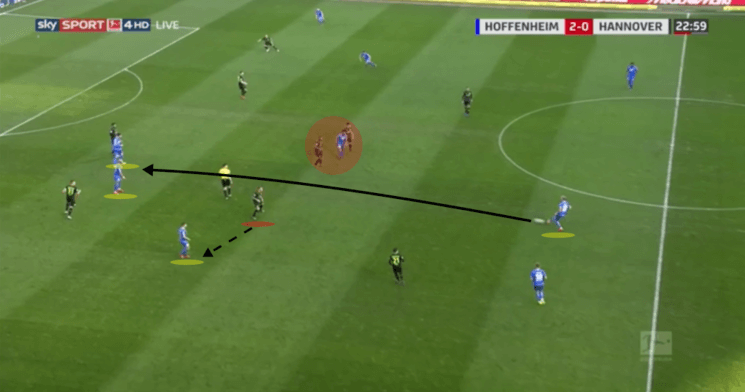 Another way in which Vogt looked to move possession into the final third involved the use of link-passes via the wing-backs. If the passing lanes centrally were completely blocked off, more space existed out-wide for Kaderabek or Schulz to receive. After receiving the ball, the wide men could play horizontal passes into the 10 space behind Hannover’s midfielders. Equally, they could combine in 2v1 scenarios before delivering a cross to the box, as was the case in the progression shown below. 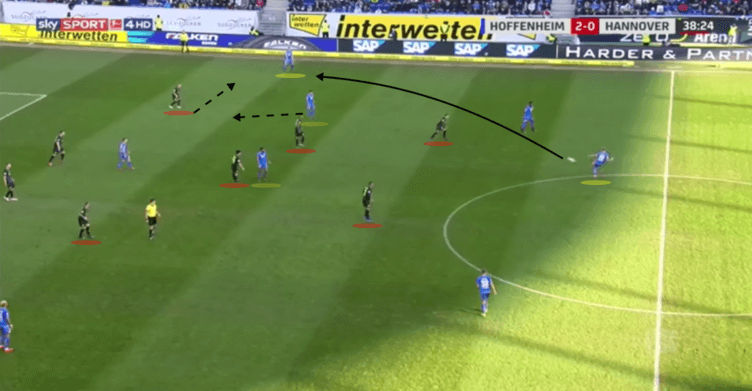 Often recognised for their highly vertical approach, Hoffenheim again deployed many direct methods throughout Saturday’s fixture. Instead of positioning themselves high and wide, Kaderabeck or Schulz would sometimes drop deeper, drawing their opposite number with them. This created an open channel for the defenders to play a long pass into.

The fluid movement of the attackers and midfielders frequently saw the likes of Amiri, Kramaric, Joelinton, or Belfodil make late runs into these spaces to receive. The image below shows Kaderabek dragging his marker out of the space, creating a pocket for Amiri to run into, and for Kassim Nuhu Adams to play a long pass to find him. 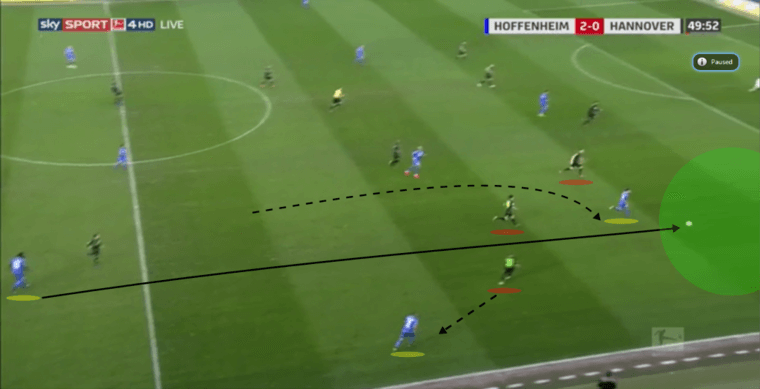 Hoffenheim’s direct play also frequently involved playing lofted passes towards the strikers in search of the second ball. On the occasions when a blue shirt won the aerial battle, his teammates would be ready to get on the end of the knockdown before combining to break through Hannover’s last line. Equally, if the defender won the header, the Hoffenheim players were still well prepared to win the second ball.

Just four minutes into the game, this tactic was rewarded for Hoffenheim’s first goal. Following a turnover deep in their own half, Nagelsmann’s side play direct towards the last line. The ball is headed down by a Hannover centre-back, before being pounced upon by Joelinton and Belfodil. The former is first to the ball ahead of the defenders and manages to force his way through on goal before sliding the ball underneath the on-rushing goalkeeper. 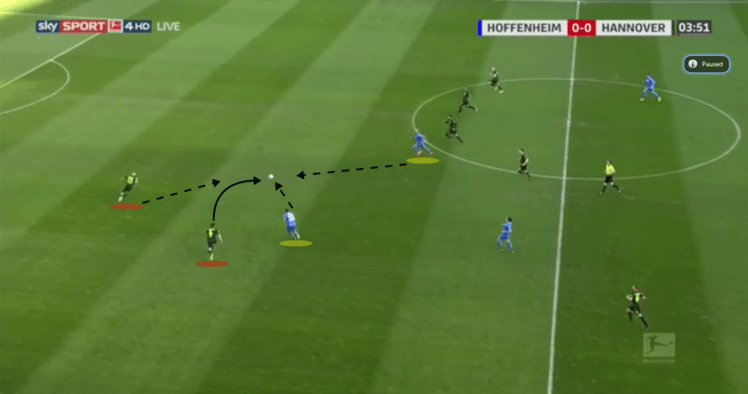 Hoffenheim’s ability to vary their build-up approach and positional play throughout the game was hugely impressive.

Hoffenheim effective up to final third

Despite taking all three points and scoring three goals in the process, Hoffenheim were actually quite wasteful with their opportunities. Their varied approach to building the play proved effective in creating quality opportunities as they registered 27 shots on goal. However, 16 of them were off-target.

Against more defensively robust opponents, Hoffenheim aren’t likely to be afforded so many clear-cut chances. They’ll need to be more clinical in the coming weeks if they are to mount a serious challenge for fourth place.

Although it took him just four minutes to get on the scoresheet, Brazilian striker Joelinton was perhaps the most guilty of misfiring. The image below shows him missing the target comfortably from just outside the penalty area. With the keeper out of position and the defenders scrambling, the 22-year-old also had the option of squaring the ball to Demirbay for an open goal. 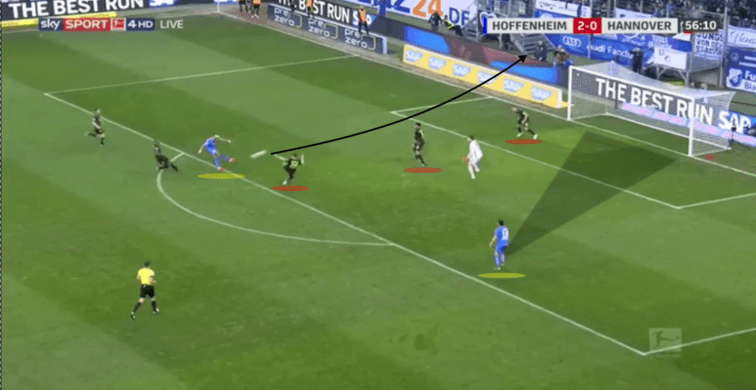 Again the culprit, the image below shows Joelinton firing 10 yards wide having been put through one-on-one with the goalkeeper. Once more, he has the opportunity to slip in his teammate for an open goal, but instead chooses to go alone, and fails to finish the visitors off. 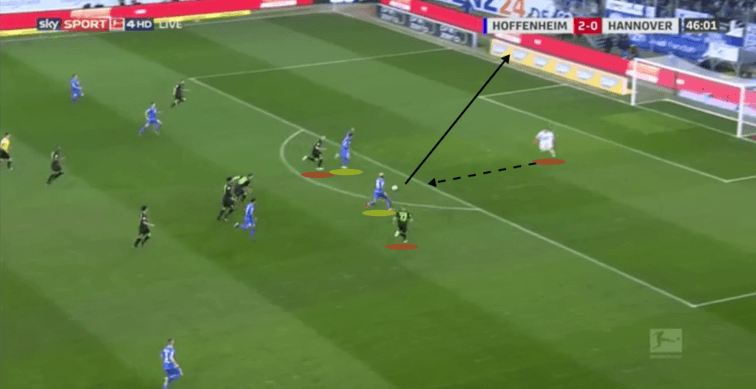 He wasn’t the only wasteful attacker for the home side. Belfodil and Schulz were also guilty of missing quality chances. In fact Demirbay had perhaps the best chance to secure the result early in the second half, but he mistimed his attempt to place the ball into an empty net.

As shown below, a covering defender arrives at the last moment to block the German international’s shot on the line. The playmaker did make amends in the 80th minute, however, with a clean strike into the bottom corner from outside the box. 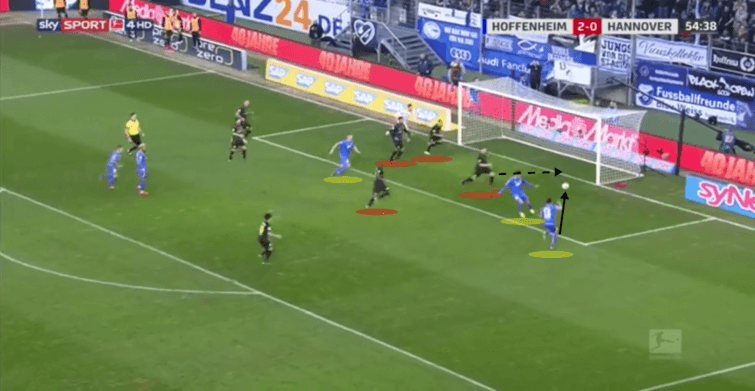 Many of Hoffenheim’s other attempts on goal during this game could also be considered gilt-edged. While much of the opportunities were wasted with lacklustre finishing and poor decision making in the final third, some last-ditch defending and quality shot-stopping were also contributing factors in keeping the score down.

Despite a dreadful run of form, hope remains that Hoffenheim can sneak into the top four with 12 games remaining in the league campaign. Failing that, an upturn in performances should at least see them qualify for next season’s Europa League. For Hannover, another defeat means they stay second from bottom, with the chances of survival looking increasingly bleak.