Hoffenheim come back from the dead in six-goal chaos

Going into this matchday Borussia Dortmund held a seven-point lead over fierce rivals Bayern Munich at the top of the Bundesliga table. This lead may not seem much, but for the last six seasons Bayern have won the title with ease as their opponents have struggled to maintain a serious title challenge. The last team to have denied Bayern the title? Borussia Dortmund in the 2010/11 season.

Since that title win, Dortmund have struggled to find consistent form under a series of coaches. We had the end of now-Liverpool manager Jurgen Klopp’s era before Thomas Tuchel and Peter Bosz each led the side for a short period. With every change of coach, the game model was altered and the expectations placed on the playing staff shifted. This lack of consistency can be the difference between a club meeting expectations and falling short.

This season has seen yet another new coach appointed with the former Borussia Monchengladbach coach Lucien Favre in the dugout. Favre is a coach with a history of success in the Bundesliga and he has used of a variety of tactical systems so far this season. This match would see Favre against another tactically flexible coach, Julian Naglesmann of Hoffenheim. In the reverse fixture, the two sides drew 1-1. This match would once again result in a draw. 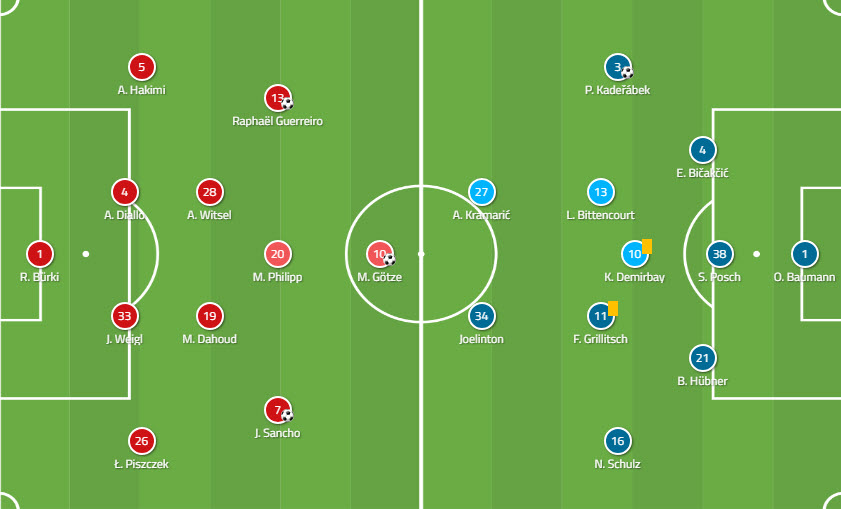 The most striking piece of team news was that the Dortmund talisman Marco Reus was injured and unavailable. His place in the starting line up was taken by Maximilian Phillip in the 10 role. In recent weeks we have also seen Bosz choose to utilise the young midfielder Julian Weigl in a defensive role. This continued as he partnered French defender Abdou Diallo.

Hoffenheim started in their regular 3-5-2 shape with Brazilian forward Joelinton in attack alongside Croatian international Andrej Kramaric. There was a slightly unusual partnership in the midfield with Florian Grillitsch playing as the controlling midfielder and Kerem Demirbay and Leonardo Bittencourt as the more advanced players.

In top-level football today the progression of the ball from the defensive third to the final third is of paramount importance. There are a number of different methods that teams can use to do this. In this match, both sides looked to move the ball from back to front using passing patterns. What was interesting was that their tactical structures saw their respective methods of moving forwards be completely different.

This is an interesting distinction because the concept itself is the same. The way that this concept was applied however changed depending on the positioning and structure of the players, as defined by the coaches. To explore and understand this further we should look at the methods that both sides used. 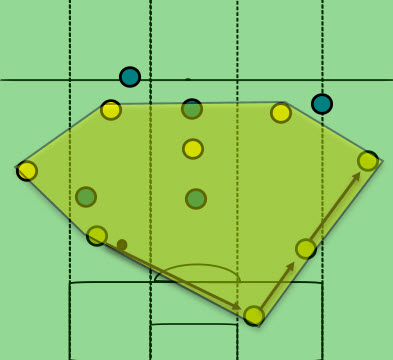 Dortmund used a four-chain in the defensive line, and with one of the two controlling midfielders dropping into the central area, they produced a 5v2 advantage over the two pressing Hoffenheim attackers. The number 10 for Dortmund would rotate back into the midfield in order to offer a balance to the structure as they looked to play into the midfield areas.

Dortmund also utilised their goalkeeper Roman Burki in order to safely rotate the ball across. In this example Diallo, in possession, could have played directly across to Weigl. This pass would have come under threat from the Hoffenheim attacker. Circulating the ball through Burki and out to Weigl is more secure.

In the early stages of the match, we saw Hoffenheim fail to apply significant pressure to Dortmund in the first half. This was something that was addressed by Naglesmann as the second half wore on. 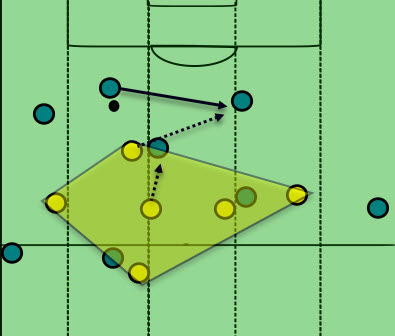 Hoffenheim used a three-chain in their defensive line with one controlling midfielder sitting deep. As they rotated the ball across the defensive line Dortmund would initially sit off in a relatively compact and passive block until the ball was shifted out to the wide defenders. At that point, the forward would press with the 10 moving to cover the controlling midfielder.

With their two wing-backs moving to a high line as they looked to progress the ball, we saw Hoffenheim either try to access these wide areas quickly or play forward through the half-spaces to the two more advanced central midfielders. As the match wore on those wing-backs took deeper positions initially in order to facilitate an easier escape from the defensive third.

Dortmund attack in the wide areas

During the match Dortmund took a 3-0 lead, before being pulled back to 3-3 in the second half. This early lead was built on the back of overloads and combinations in the wide areas. The two wide central defenders for Hoffenheim, Ermin Bicakcic and Benjamin Hubner, were constantly pulled out and isolated in wide areas.

Both full-backs for Dortmund, Achraf Hakimi and Lukas Piszcek, moved high to stretch the Hoffenheim defensive line. This created space for the wide forwards to move inside to the half spaces. 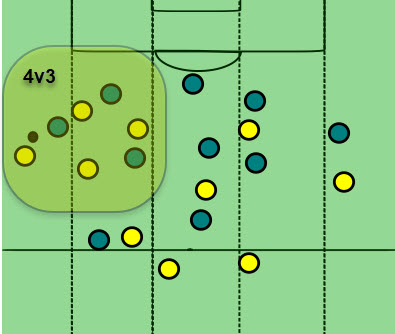 With the near-side central midfielder and the central forward also moving in to support the ball progression on that side, we would see Dortmund create a 4v3 overload on their attacking side. With the abilities of players like Mario Gotze and Jadon Sancho in tight areas, these overloads can quickly become goalscoring opportunities. 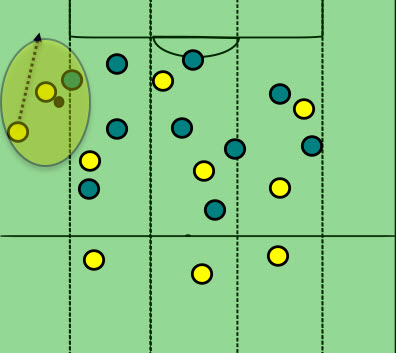 As soon as the defenders were forced to move out into these wide areas there was space created centrally that could be exploited by a simple central pass. As the match progressed we saw Dortmund continue to attack in these wide areas. At 3-0 Jadon Sancho was released down the left-hand side and as he cut across his ball hit the far post. Within two minutes of that moment, Hoffenheim had made it 3-1 and started their comeback.

It is a simple truth that Julian Naglesmann will come out of this match with the credit for having turned the game around. The full truth was slightly different. Hoffenheim were outplayed for large periods of the match with the expected goals coming in at 2.5 to 1.57 in favour of the home side. As the second half progressed though, Hoffenheim began to try and force their way back into the match. 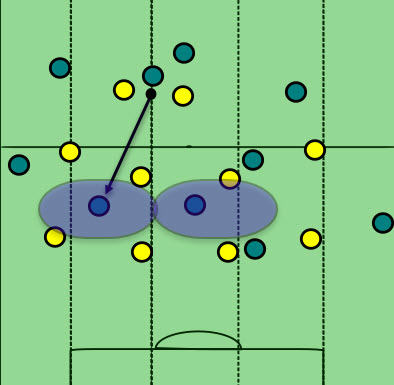 The first key saw Hoffenheim start to find pockets of space in between the Dortmund lines. As Dortmund began to press and defend in a 4-4-2 structure, the flat lines were poor at preventing passes through them. As we saw above, Dortmund used the wide areas in order to place stress on the opponents. Hoffenheim achieved the same result through central areas.

The pass played into the pockets as above would be followed by periods of combinations that isolated and attacked the individual Dortmund defenders. 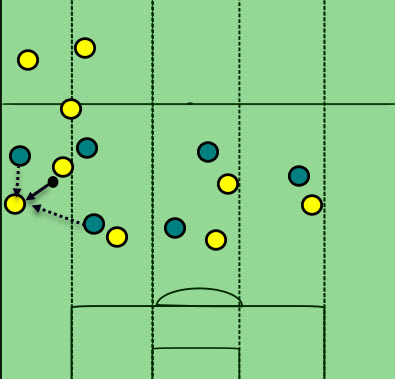 We also saw Hoffenheim start to apply more pressure to the Dortmund ball progression to prevent them from playing out of the defence in the first instance. Reiss Nelson was introduced to play the 10 role behind the two forwards. This allowed Hoffenheim to press more effectively.

In the example above, as the ball is shifted back to the Dortmund left-back the press is triggered, with the number 10 now preventing the controlling midfielder from taking the ball straight back. The key, however, is the speed at which Hoffenheim were then able to press the ball backwards, with the wing-back and the near-side forward pressing in order to regain possession high up the field.

In the end, 3-3 was a far better result for Hoffenheim than it was for Borussia Dortmund. The home side have now drawn 3-3 in each of their last two matches, pointing to definite defensive concerns. They are still a potent attacking outfit however, and this will stand them in good stead as the season progresses towards the end of the season.

The defensive problems will continue to be a concern. With Bayern Munich bound to find form as the season comes to an end, there will come a time that their lead at the top of the table is cut and they need to produce results. These times will require defensive strength.