How Athletic blunted Messi, Suarez and Coutinho in Bilbao

A trip to San Mames is never easy, and Ernesto Valverde probably knows this best. The ex-coach of the Basques returned to his former love with Barcelona and was held to a draw by an inspiring performance of Athletic Bilbao in front of their fans. The Catalans just couldn’t find a cure for the compact defence the hosts deployed which resulted in no goals on the night.

Still, when your man of the match sits in-between the sticks, it is usually telling enough of what kind of a game you’ve had. Some Marc-Andre ter Stegen heroics and a lack of sharper finishing could imply that this was indeed a point gained rather than two lost for Barcelona.

This tactical analysis will use statistics to dissect the thriller to be that turned into a sleeper, and to determine just what transpired that lead to both teams sharing the spoils in Bilbao. 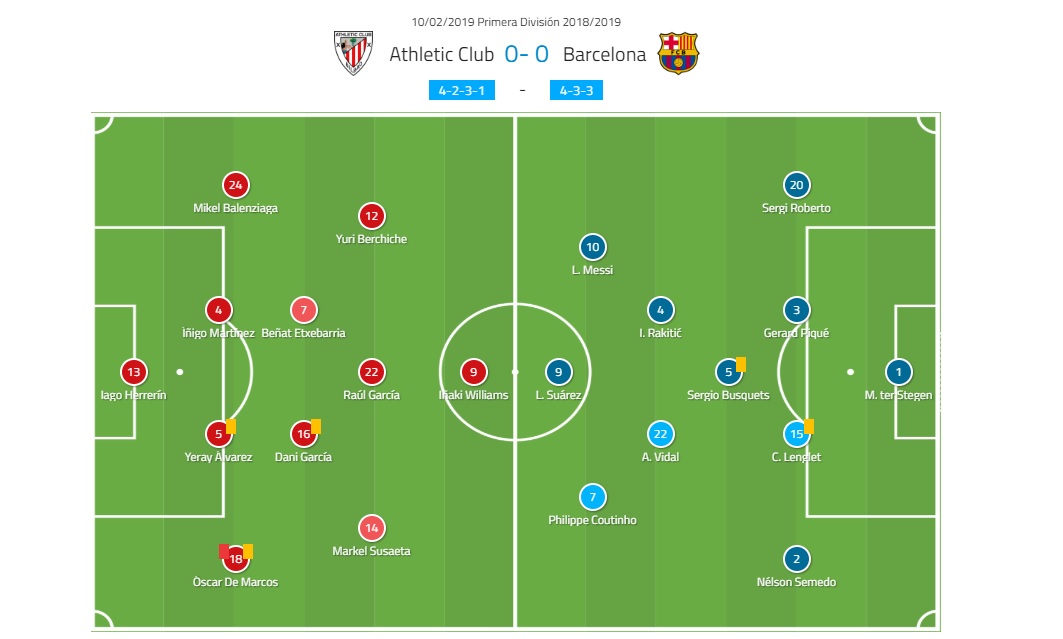 Ernesto Valverde’s choice of personnel was probably the most important tactical issue he faced against Athletic Bilbao. The Ant decided to field a mixed squad, which was not entirely by choice, and it mostly backfired. The biggest omissions were Jordi Alba, whose fifth yellow card in the league brought a suspension, and Arthur Melo, who suffered a three-to-four weeks long injury after the Clasico at the Camp Nou.

As if two of his key pieces missing were not enough, he decided to field a clearly unfit Lionel Messi which was extremely risky considering the venue and the aggressive opponents. In the end, the price he paid was evident in the scoreline, and luckily for him, was not physical.

Nelson Semedo deputized for Alba at left-back and Arturo Vidal started in midfield alongside Sergio Busquets and Ivan Rakitić. Philippe Coutinho got the nod in front of Ousmane Dembele as the Frenchman is yet to reach full game readiness coming back from a short injury.

The team operated in a 4-3-3 system throughout the game.

Gaizka Garitano knows how Ernesto Valverde felt prior to the game, and he might have had it even worse than his counterpart. Five injuries and a suspension ridden Athletic Bilbao had to welcome the league leaders at San Mames, which meant that Garitano would have a puzzle to solve even before setting foot on his own pitch.

Having served his penalty after getting a red card in the game against Real Betis, Oscar de Marcos returned at right-back. On the other side Ander Capa had to sit the game out due to his yellow card suspension. The centre-back pairing was luckily untouched, and so were the important pieces like Dani Garcia and Inaki Williams higher up the pitch.

In the middle of the park, however, Garitano decided to shuffle the cards a bit. Benat was benched as San Jose took his place next to Garcia, and Raul Garcia played just behind their pacey forward and alongside Yuri Berchice and Markel Susaeta on his left and right side respectively.

The Basques used a 4-2-3-1 formation, which was not tampered with at any point during the game.

Even though the title of the paragraph might be a bit misleading considering that no goals were scored on the night, Athletic Bilbao was the first team to really threaten their opposition. In fact, you could say that they were the only really threatening team on the pitch at San Mames.

Right from the off they took the game straight to Barcelona, didn’t let them play the way they wanted to and imposed themselves as the more dominant side of the two. This was done by completely closing the Catalans’ passing channels to nullify their forwards’ impact, and crucially, by transitioning between defence and attack with speed and accuracy.

The image above is the perfect depiction of the first 45 minutes played in Bilbao. Barcelona struggling to find the right passes as they had Athletic in their faces at all times. Notice how the only way forward is through a long ball or by switching sides, as all other options are basically ruled out by great man-marking.

Another thing to be noticed is Sergio Busquets’ positioning. The Octopus of Badia would drop to the lavolpiana position between the centre-backs to bring more stability to the defence, and let the full-backs go further up the pitch to give some width to their attack.

Even though this was crucial due to Barcelona not having any natural wingers on the pitch, it did leave them vulnerable when Bilbao achieved numerical superiority and overloaded the midfield with ease.

Notice in the example below how disjointed the Catalans’ trident in the middle is. It’s extremely difficult for them to make any progressive passes or even create anything amongst themselves.

This had two direct results. The first was the obvious lack of attacking effectiveness that Barcelona got from their midfield, and the second was the impact it had on the front three. With none of the midfielders being able to create any palpable results and all of them missing that creative spark, it was up to Lionel Messi to once again drop deeper and orchestrate the game himself.

This did not happen on just a couple of occasions either. Messi was constantly in the midfield, trying to send the ball through the lines and to find Suarez or Coutinho. In the end he had a decent connection with Nelson Semedo on the left, but Jordi Alba’s absence was a glaring one to say the least.

Barcelona’s left side was still perhaps the more proactive of the two offensively, but defensively it struggled a lot. Athletic knew which flank to target as Ernesto Valverde opted to choose Semedo as Alba’s replacement.

As skillful as the Portuguese international is, the left is still not his natural position, and as much as he could cover it going forward, he was having trouble being as effective defending.

The key in that first half was quickly transitioning from defence to attack and catching Barcelona off guard. The Catalans misplaced a total of 84 passes, and Bilbao were always resolute and ready to pounce, racking up 41 interceptions on the night. Once they had disrupted Barca’s build-up, they would swiftly switch sides, and send balls into the box.

That was mostly done through crosses. Both the number of those crosses and the clear side preference can be seen in the images below. Only one came from the left while all the others were sent from the right. Seeing how they were also skillful in the air, winning 21 offensive aerials, the plan was great.

At least it would have been had it not been for ter Stegen who made five saves on the night. Not only that, the German Wall has saved 27 of the last 31 shots on target he has faced in La Liga, and only conceded four goals in total in that period of time. He’s without doubt one of the world’s best.

Second half brings some changes

Maybe it was something Ernesto Valverde said in the locker room or it was Athletic running out of gas, but Barcelona came out guns blazing in the second half. More intent and determination was seen in their play as the build-up was more fluid and faster, and the grip around Bilbao was getting tighter every minute.

It was getting tighter and more difficult to breathe for the Basques as Barcelona pinned them down in their own backyard and minimalised the space in which they could operate. But Athletic was fine with that. After all, that is usually one of their game plans anyway.

Garitano decided to sit back and soak up all the pressure, deploying a solid compact block consisting out of two banks of four and only two men close to the middle of the pitch. This low-to-medium block meant that Athletic was ready to settle for a draw or patiently wait for their chances in the form of counter-attacks.

Their plan was, once again, successful as Barcelona failed to make any progress at all and failed to put the man between the sticks in any real danger pretty much throughout the whole match. Out of three counters that were created as a result of their patience, one ended with a shot but once again, they were missing that end product to seal the deal.

Barcelona seem a bit more sloppy in possession than usual, as of late. The high number of lost balls in midfield is not really a good sign for the Catalans as their whole game plan is built upon total possession domination. They may have achieved that against Athletic but most of the time, that possession led nowhere.

The hosts deployed a great block to nullify Blaugrana’s approach but the lack of creativity killed all of their chances. This was down to the team selection as much as a couple of Ernesto Valverde’s crucial mistakes.

The first and the biggest one lay in the midfield trio. Sergio Busquets, Ivan Rakitić and Arturo Vidal are all individually great players but they don’t work as a trident. The precise reason is the lack of a real offensive outlet. In the following example, Valverde instructs Busquets to sit deep and Vidal to cover for Roberto while Rakitić gets to venture a bit higher up the pitch.

Even though he made a couple of great runs, he failed to send accurate passes to set his teammates up for finishing touches. But he was not the only one doing it. Luis Suarez seemed completely out of sync with the rest of the squad, and Philippe Coutinho failed to have any real noticeable impact on the game.

The Brazilian did start to pick up the pace as we approached the latter stages but was still eventually replaced by Ousmane Dembele for the final 15 minutes at San Mames. The Frenchman, however, did not have enough time to shift the tide in Barcelona’s favour.

It was a rather disappointing performance from Barcelona who have failed to score for the first time in 37 La Liga games. Still, it could be argued that this is a point gained rather than two lost, considering that Athletic Bilbao were the more proactive team on the pitch.

Once again it was down to Marc-Andre ter Stegen to save them but he was helped by Clement Lenglet and Gerard Pique respectively. Moving forward, Barcelona seemed out of ideas. An unfit Messi was not up to much on the day, but the fact that he still outperformed most of the Catalans’ starters is telling enough.

February is traditionally the worst month for Blaugrana who always struggle to find their footing and are prone to falling off at this stage of the season. Now it is up to Ernesto Valverde to get his troops back in order and ready to perform again. The Champions League is just around the corner, not to mention that they still have two Clasicos to play – one in La Liga and the other in Copa del Rey.

A whole week free will definitely do them good because they better have their batteries fully charged for the spectacle that is soon to come. We had better sit tight, because the ride is getting crazier by the minute.