After an impressive victory against RB Leipzig last week, Lucien Favre’s Borussia Dortmund welcomed a relegation-threatened Hannover 96 in this Bundesliga tie. Marco Reus’ return to the Dortmund starting line-up provided a huge boost for the league leaders and his impact was quick to be felt.

Dortmund began the match with their tried and tested 4-2-3-1 but were largely unable to play their brand of football thanks to some early defensive work from the visitors. It was to prove a Jekyll and Hyde performance though as an impressive four goals in the second half boosted their Bundesliga title hopes.

There was a lot on the line for both Dortmund and Hannover here and the game was much closer than the scoreline illustrates. Virtuosic performances from Jadon Sancho and Achraf Hakimi aided the side to their important victory in their slightly tweaked positional and tactical roles. In this analysis, I’ll look at what went right and wrong for each side using a variety of data. 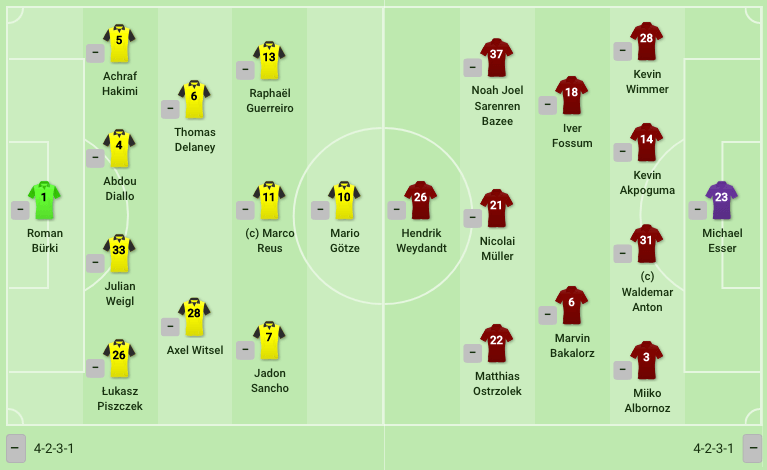 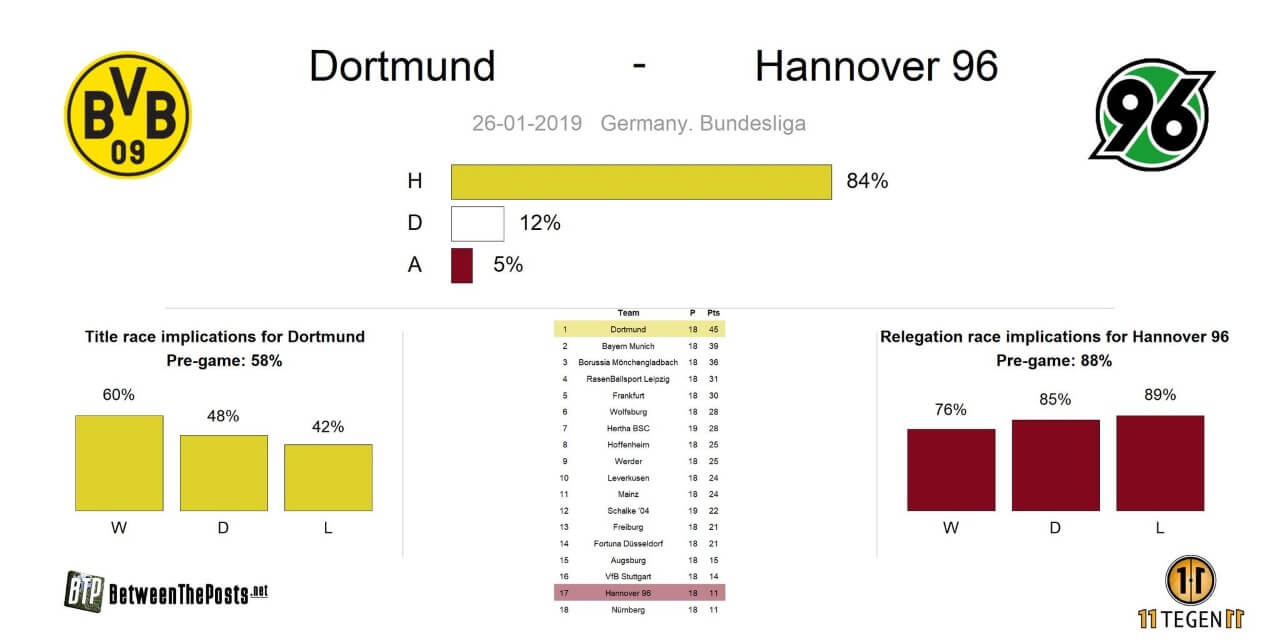 For all of Dortmund’s strengths, adaptability isn’t too high on the list. They’re able to play a versatile game, but only when conditions are in their favour. When they’re not, for example against Fortuna Dusseldorf recently, their defence is repeatedly split open with long balls.

In this match, it looked to be much the same initially. Hannover quickly set the tone with a couple of attacks that could easily have been goals. But more important was their defensive structuring and its effect on Dortmund’s style of play.

Always favouring the patient build-up from the back, Favre’s men were denied this opportunity as Hannover pressed high up the field, limiting distribution opportunities for goalkeeper Roman Bürki. This forced a lot of pass-backs and wasteful long balls.

At the other end, Hannover began the game positively as well. Utilising a fairly low block, they deflected Dortmund’s central movements to the channels. Although confident in playing out wide, the majority of Dortmund’s goals are created from movements in the half-space, particularly at the edge of the box. Very rarely do goals come from crosses.

Often utilising overloads and reverting to five at the back, Dortmund were deprived of clear opportunities. Despite a very clear-cut chance for Marco Reus early on, it was clearly going to take a moment of individual brilliance to break the deadlock and that came with Hakimi’s opener.

It’s no coincidence that Achraf Hakimi shone in this game. Dortmund, adhering to the ‘modern jazz’ style of Lucien Favre, allow for certain acts of spontaneity within their confines. This means that there must be some free radicals in the squad. This is Hakimi: pure chaos, pure creativity.

As one of the freer members of the team, Hakimi is well known for his pacy runs (he’s the fastest player in the Bundesliga) either down the wing or, more awkwardly for opponents, cutting inside as well. In this match, particularly the first two goals, he exhibited his ability to break down sides that are set on making it difficult for Dortmund to impose their tactical plan.

Although this illustration is limited in showing where exactly he played, the heatmap better illustrates this and the pass map (below) shows his activity in these positions. What it does highlight though is the vertical measurement of his position and how advanced he averages for a full-back. Playing even higher up than Piszczek, the right full-back, Hakimi performed his duties almost wholly as an attacking element.

His stamina is a key attribute and contributes greatly to his ability to move forward relentlessly, recover in defence and also to perform a strategic duty of both joining in with the high-press and pulling players out of position, as for the third goal from Gotze.

Hakimi’s pace has been directed by Favre to create decoy runs, pulling defenders out of position and opening up spaces for attacking moves. Interestingly, his position in this match alongside Sancho’s was particularly fluid. Both of these players also used their advanced knowledge of positional play and their natural pace and stamina with this slight tweak in their role.

Second half, game on

Hannover’s defence, as previously mentioned, functioned precisely as it had to in the first half. Dortmund’s lack of momentum wasn’t just down to their opponent’s performance though. In the first half, Dortmund made 250 passes with a success rate of 79%. This came from 54% possession from which they created two big chances.

Their lack of success, partly through struggling to link up passes and transition from back to front, was amended in the second half with an emphasis on retaining possession. This is a tactic not overly used by Dortmund who only average in the mid-50% range.

In the second half, they had 70% possession and made 390 passes with a success rate of 88%. It was more patient and considered, as suits them. The gung-ho approach of long balls, of which only 56% were successfully completed, in the first-half yielded zero counter-attacks. This shift in emphasis for the second half created three big chances and two counters, leading to four goals.

A large part of this shift came from Jadon Sancho playing in a more fluid role, drifting from his wing to facilitate the transitions. Axel Witsel remained as the defensive fulcrum whilst Sancho played a role similar at times to a traditional number 10.

It’s not the first time Sancho has taken on this role. In their last outing against RB Leipzig his movement was similar. Sancho recorded the highest number of dribbles against Hannover (six out of Dortmund’s total nine) as well as assisting twice. He was top of the pile against RB Leipzig too.

Now, in Europe’s top five league’s only Lionel Messi and Eden Hazard have more assists (10) than Sancho’s nine. Could this be a new role for the player? 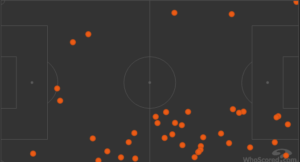 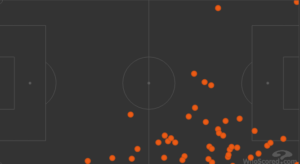 In the two prior winning matches before this, against Werder Bremen on the left (l-r) and Borussia Mönchengladbach on the right (l-r), we can see that the majority of his distribution came from the right side of the field, his usual position. 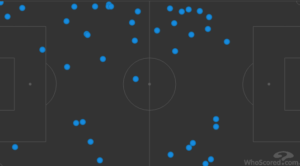 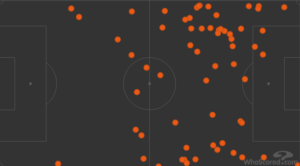 This contrasts with the most recent matches against RB Leipzig on the left (r-l) where his passing is spread across the pitch. This is even more accentuated in the pass map from this game against Hannover (on the right, l-r) where his passing activity takes places not only on both wings but also in a more central role.

With Sancho’s performance here, which garnered a WhoScored man-of-the-match rating of nine, the side over-performed their xG prediction.

This is an important statistic here as we often see teams score less than their xG and put it down to bad luck or an off day. Here, to have an xG of 1.88 and yet score five, hints that contrary to many people’s perspective of this game being a great team performance, individual talent and their ability to score from nothing also played a large part.

Dortmund showed their quality in the second half after Hannover had done well to stop them playing their favoured style in the first. The single goal of the first half was enough to break Hannover’s defensive spell and opened up play a bit more. It was only in the second half that Dortmund managed to find their rhythm.

Although the score and its goal difference are welcome, Favre will know that he has his work cut out for their upcoming tie against a rampant Eintracht Frankfurt. With Bayern Munich hot on their heels, every game is a must win and Favre will have to re-establish some balance if he is to find victory in his next game.

Frankfurt are lethal in attack and Favre can’t afford to allow Hakimi such marauding runs without risking opening up spaces for them. We can expect a much more balanced performance, similar to the one against RB Leipzig. Favre will make it clear that this game will be a battle decided by which side can establish their own football first.