Last week the whole football community in Germany looked at Joachim Löw and his press conference in which he would present the results of his world cup analysis. With the game against France, Germany starts a new chapter and wants to develop in the great team they were a few years ago. Unsurprisingly, Löw didn´t change that much in his squad selection. Only three players are new in Löw´s squad. Thilo Kehrer, Nico Schulz and Kai Havertz. The last one is probably the most interesting to watch. After the discussion about Mesut Özil and his retirement, Germany needs a new offensive midfielder who can give Germany the much-needed technical gifts in the final third. Kai Havertz from Bayer Leverkusen could develop into a crucial part of the German national team.

The 19-year-old midfielder from Bayer Leverkusen is one of Germany´s biggest talents recently. Earning a starting spot in Leverkusen´s packed offence last season was the first step. Performing on a high-level constantly the second step towards his selection for the national team. During the summer speculations about a transfer of Havertz to a bigger European club were inevitable. His performances last season were just too good for a player of his age.

Together with Julian Brandt, Bayer Leverkusen has two talented offensive players who would offer a unique skill set to all major clubs in Europe. Brandt was able to show his potential at the World-Cup while Havertz will certainly do so this season in the Europa League.

But which abilities make Havertz such a unique player?

Kai Havertz again is a player with a high football IQ. I know many players get considered intelligent because they behave well under pressure, but Havertz is different. His actions do make sense all the time and give his team much-needed solutions in possession. The young German combines all types of passes with good off-ball movement and extraordinary behaviour under pressure. No matter if his team needs through balls, long balls to switch sides or quick one-touch passes in tight spaces. Kai Havertz offers all those passes as we can see in this example. 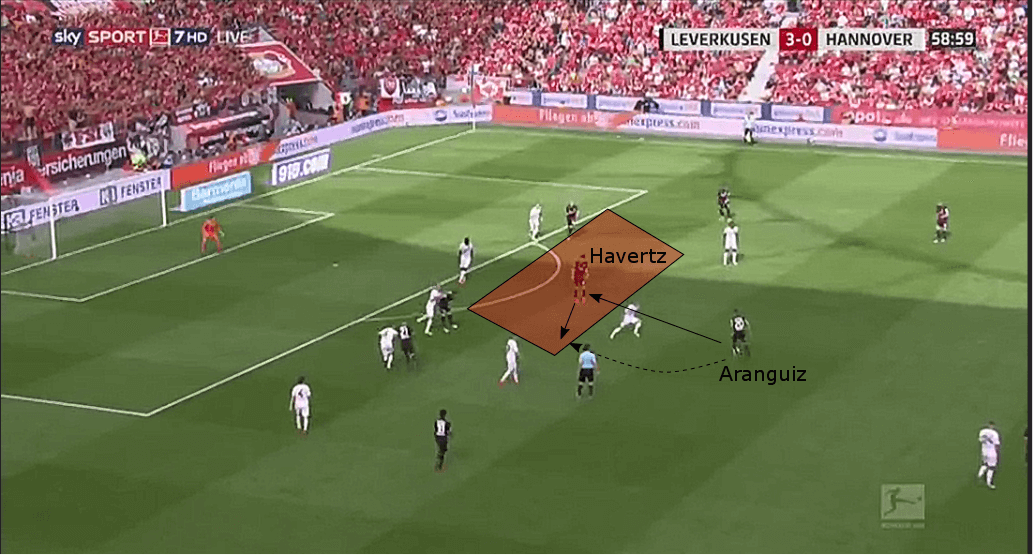 Last season Heiko Herrlich used Havertz and Brandt together as the players between the lines. While Brandt could destroy a defence with his dribbling in even the tightest spaces, Havertz was the one who was positioned nicely and threatened a defence with a variety of passes.

At the beginning of this season, Bayer Leverkusen had problems with injuries. So, Kai Havertz had to play as a central midfielder in their 4-2-3-1/4-4-2. While Leverkusen struggled with two losses out of two games Havertz was one of the better players in a for him unfamiliar position.

His versatility also allows him to play as a deep-lying forward or inverted winger additionally to the positions he played in Herrlich´s system.

Due to his role between the lines, Kai Havertz was often the player who passes the ball to the strikers into the open space. Last season he only played 1.1 key passes per game, still, the ability to play through balls is one of his major strengths offensively. 15 assists in 56 Bundesliga appearances are a clear indicator of his quality especially when you are considering his age.

With players like Volland, Bailey, Alario or Brandt, Bayer Leverkusen has quick strikers who move a lot without the ball.

A typical situation would be this one. The young offensive midfielder would be positioned between the lines of the opponent. After receiving the ball a quick turn is all he needs to attack the open space with a pass. 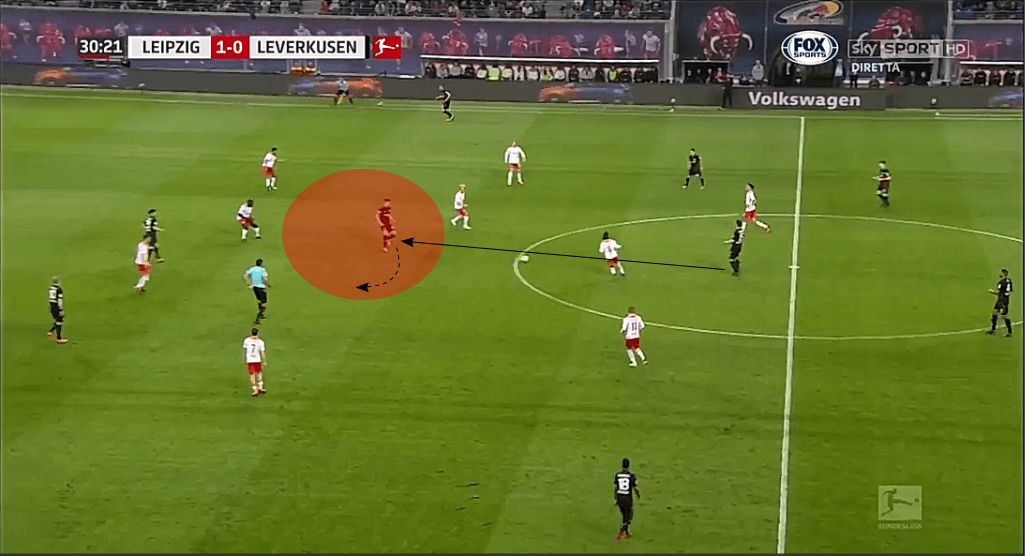 The quickness with which he includes the new information in his decision making is simply impressive. It seems that Kai Havertz always observes the structure of the opponent and exactly knows where he can find some space. This ability compensates his sometimes bad first touch. 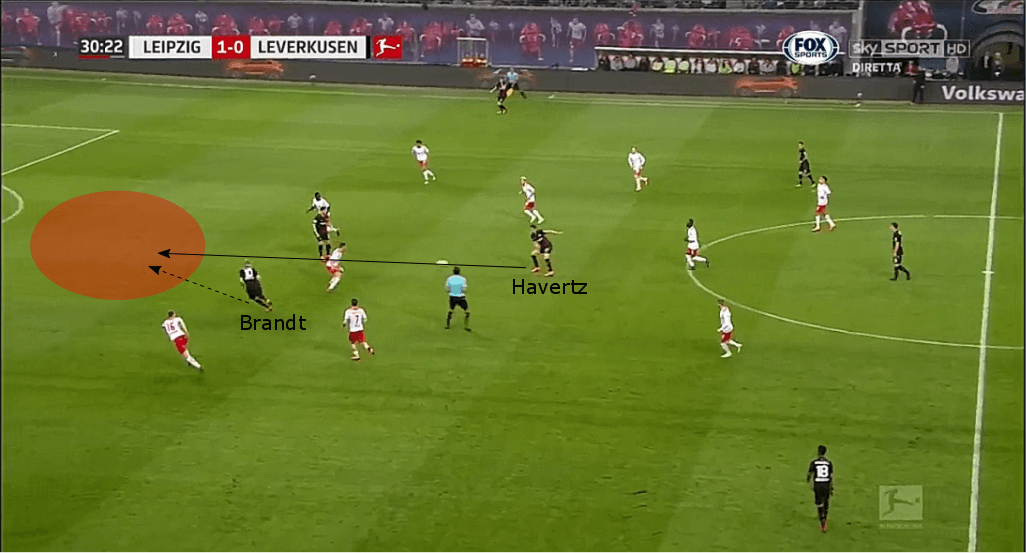 Because from a technical standpoint Kai Havertz doesn’t seem to be the perfect offensive midfielder. Especially, his first touch isn’t always the best. But he is capable of quickly controlling and protecting the ball afterwards. Furthermore, he can play accurate passes even without having the best body position like in the example above.

His second touch is always pretty good and allows him to dribble past the opponent or play the dangerous pass. 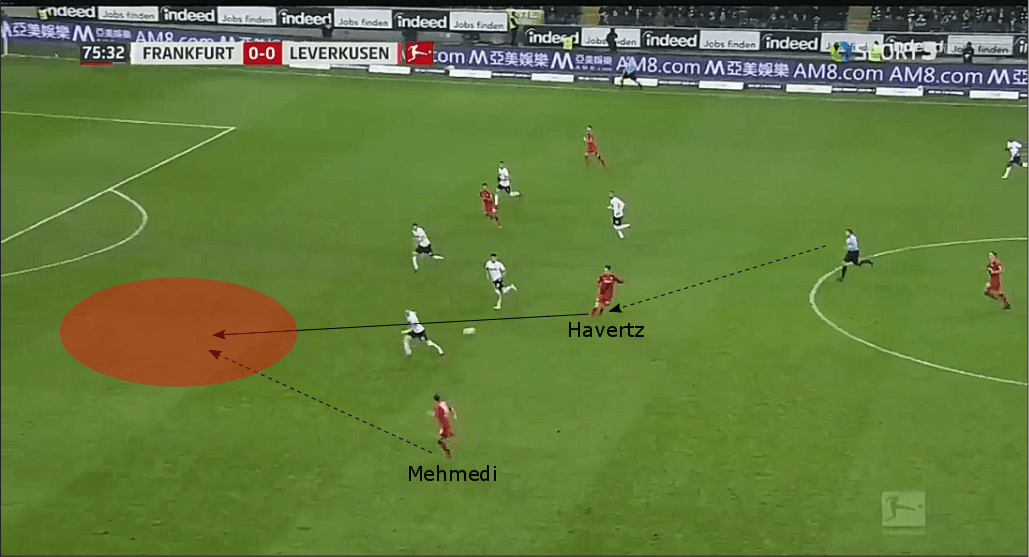 In that situation, the pass from his teammate and his first touch weren´t perfect but he quickly controls the ball and plays a perfect through ball in full speed during a counter-attack.

Kai Havertz not only plays the simple flat through balls during counter-attacks. His good observation of the game allows him to see the open space and be aware of the movement of the defenders. 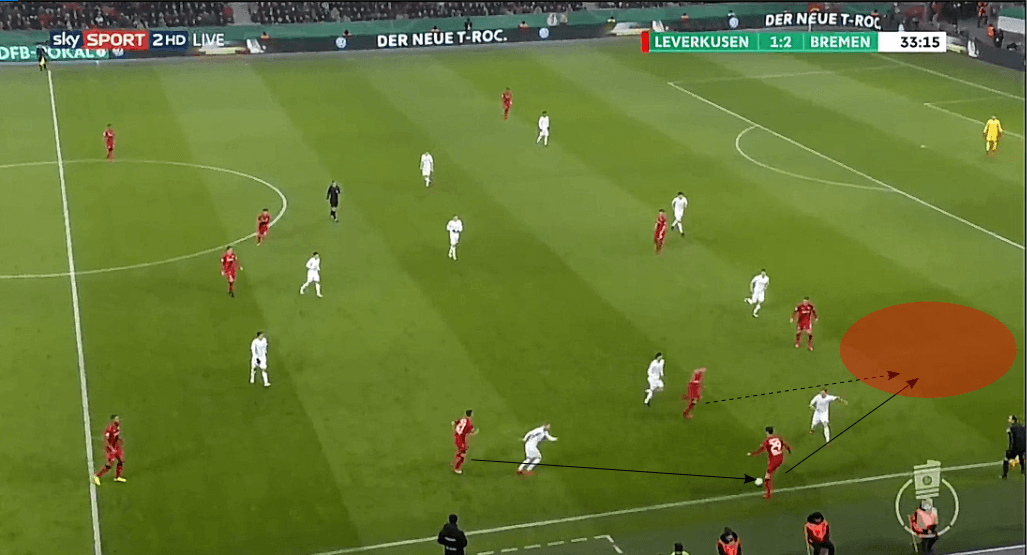 Especially, when Brandt and Havertz combinate together you can see maybe one of the most intelligent duos in football. Here, Brandt starts one of his runs behind Bremen´s line. Havertz is aware of the open space and chips the ball around the defender.

Due to his ability to play those intelligent passes under pressure, Heiko Herrlich chose Kai Havertz to play the role between the lines for Bayer Leverkusen. His actions are quick and often surprise a defence. 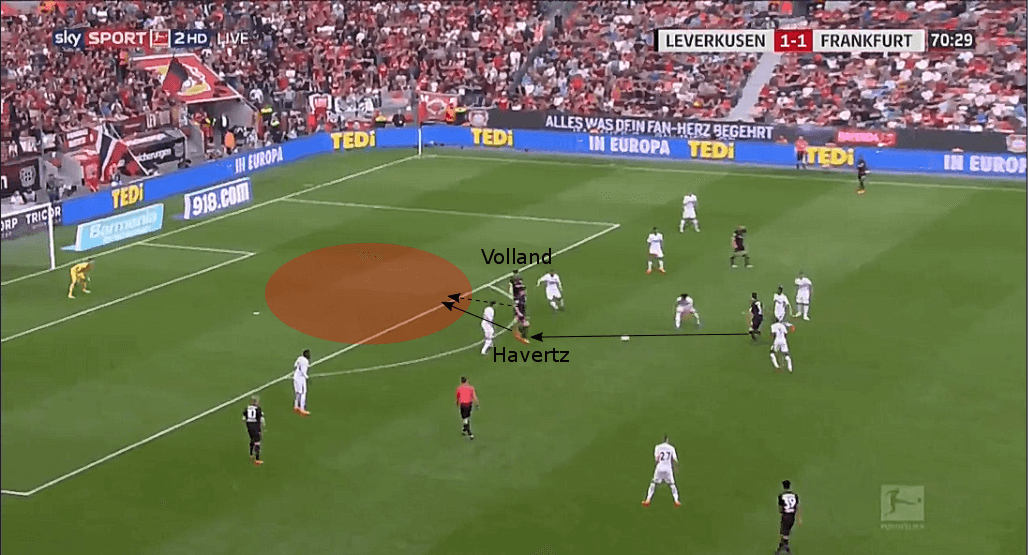 In that example, Kai Havertz should get the most credit for the goal scored by Kevin Volland. The young player from Aachen surprised the defence by passing the ball with his backheel to Volland. None of the defenders was capable of pressing Havertz, maybe they weren’t even aware of the passing line to Volland because all happened in a second. 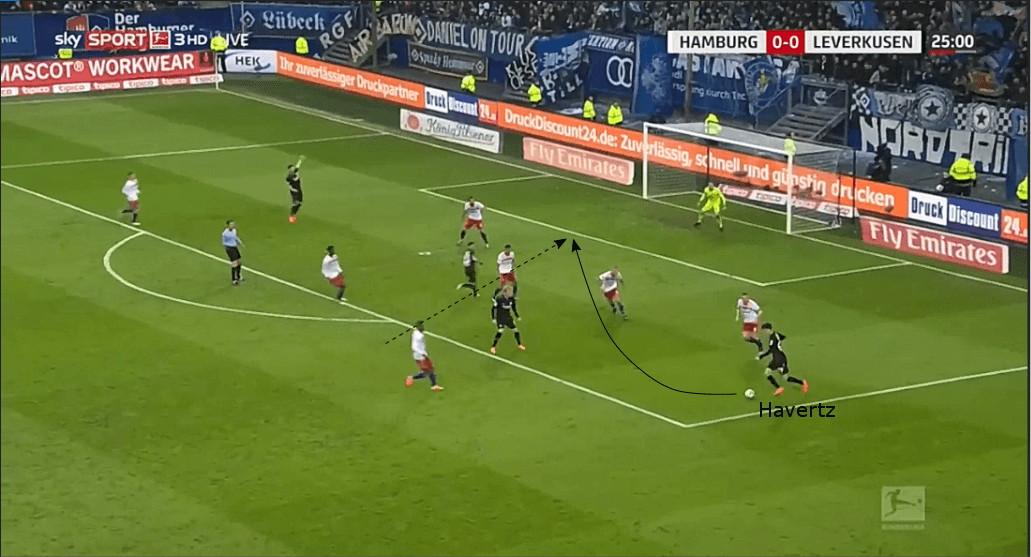 Another great example of Havertz´s creativity along with his adaptability to new situations. After receiving the ball in an unfavourable situation, he adapted quickly and saw the run of Aranguiz. With a perfectly timed cross by Havertz Bayer Leverkusen could take advantage of the hole in Hamburg´s defence.

The threat from the depth

Besides his passing abilities, Kai Havertz also showed that he can be a dangerous offensive player who can surprise a defence when they are concentrating on the striker. Havertz shows great awareness of holes in the defence. That’s why he is so dangerous after crosses.

With seven goals in 56 Bundesliga appearances, he clearly has the potential to improve in that area. Especially, his finishing isn´t on the highest level so far. However, the fact that he often appears in the right spot at the right time is a positive sign and a clear indicator of his high football IQ. The technical execution is trainable easily, however, learning how and when to arrive in the box is harder.

His timing when starting runs is really impressive. Defenders normally struggle to defend those situations, as I already mentioned in my piece about Jann-Fiete Arp. If the striker waits in the right spot, the defender has to observe the ball and the striker simultaneously.

Problems occur when the striker is positioned behind the defender because then the defender can only react to the movement. For him, it is impossible to observe both, the ball and his opponent, at the same time. Using that advantage correctly, a striker can arrive by time in the dangerous space while the defender often cannot adjust his position quickly enough. 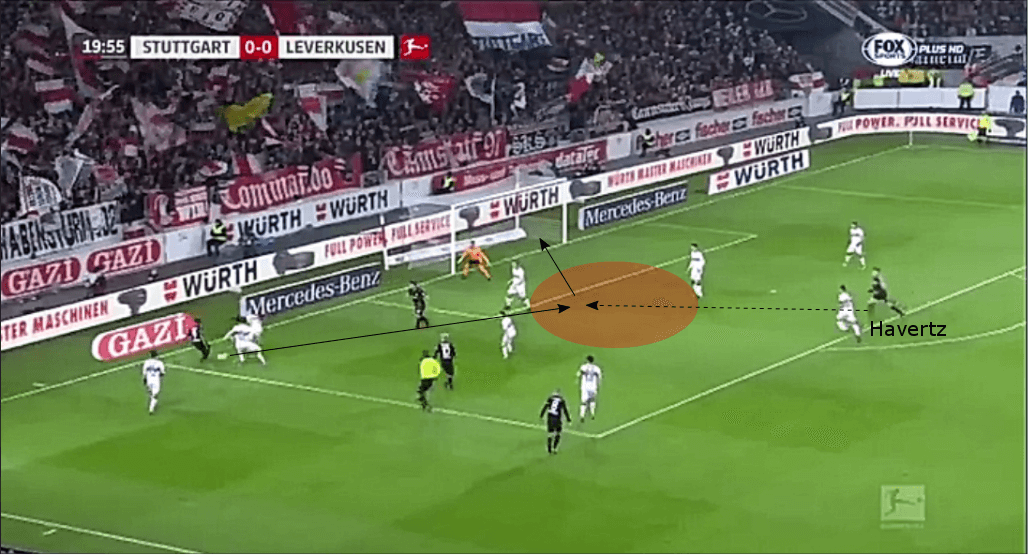 As I already mentioned, due to his intelligence Kai Havertz can play multiple positions effortless. At the beginning of the season, Bayer Leverkusen had serious injury problems. That’s why Havertz had to play in front of the back-four next to Dominik Kohr. Here, the 19-year-old midfielder showed his class in terms of good passing. 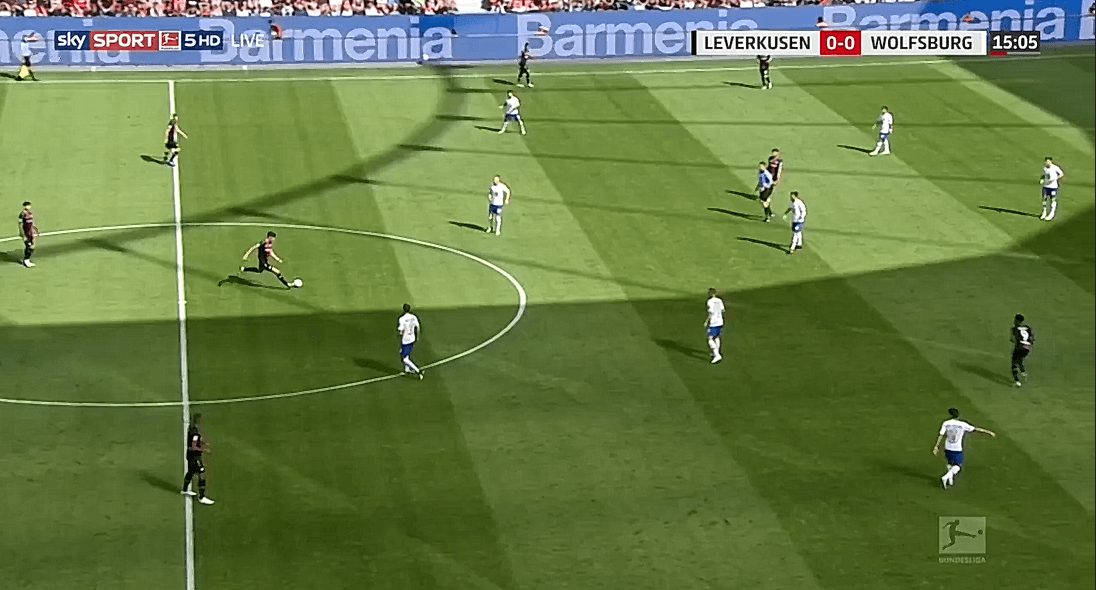 He regularly moved deeper and build-up Leverkusen´s attacks with intelligent long balls to the flanks or just simple but effective passes into the centre to Leverkusen´s offensive players between the lines. 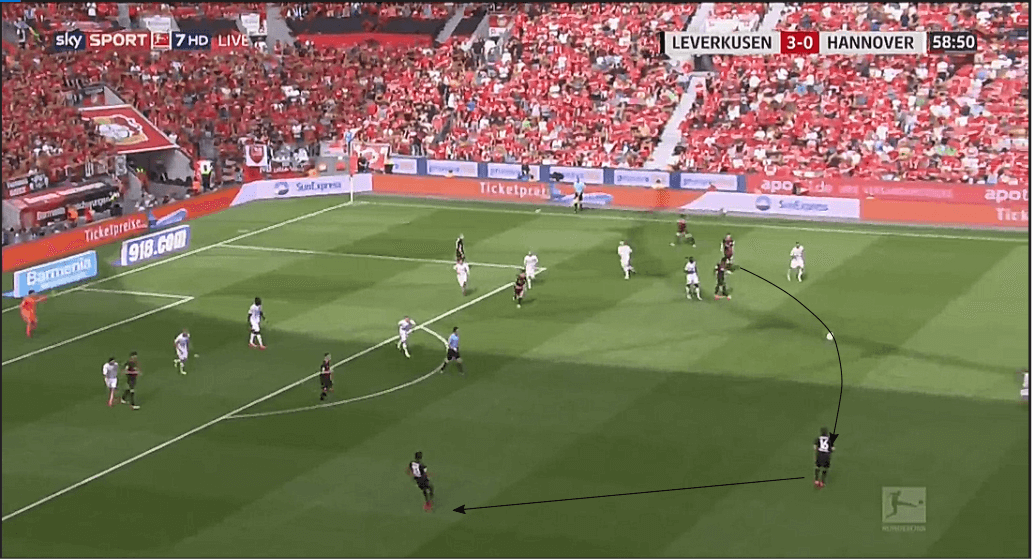 In that scene, he showed his game intelligence. Bayer Leverkusen tried to find a way through Hannover’s defence on the right side. Havertz quickly realized the gap in the centre and played an accurate long pass to Jedvaj. So, he helped Leverkusen to quickly switch sides and attack the open space.

No matter which position Kai Havertz plays, the fact that he rarely struggles under pressure makes him so valuable for his team. Although Havertz has great technical abilities his dribblings look sometimes inaccurate but are highly effective. His biggest strength is his usage of open space. When a defender pushes out of position Havertz has a great timing of pushing the ball into the open space and therefore unbalance the defender. That’s why he often gets fouled.

Here, he waits until the defender has arrived just to then use the space in front of him and dribble past the defender. 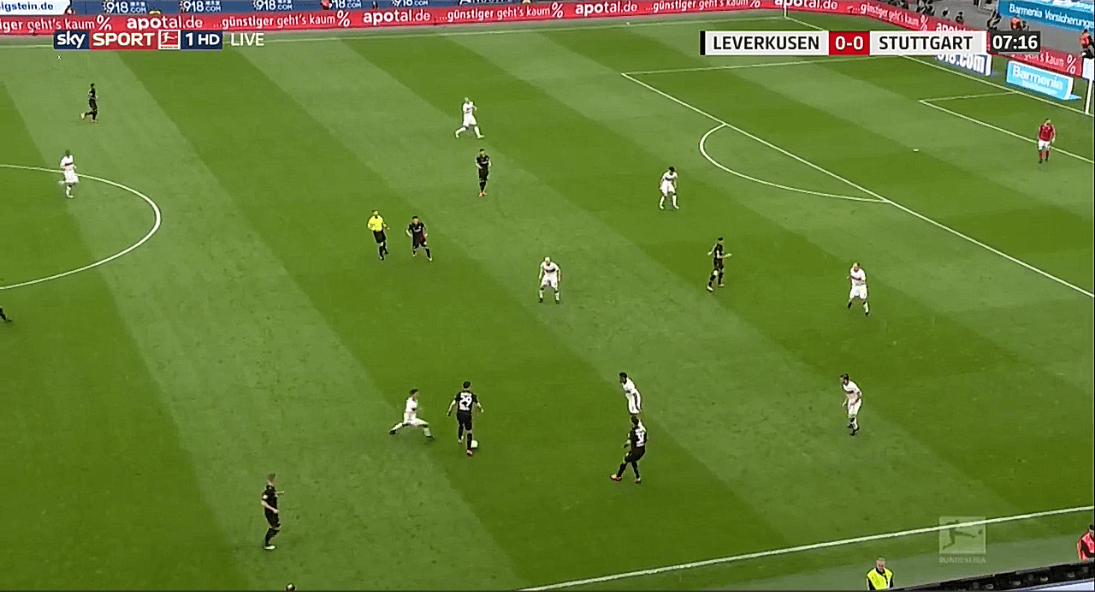 Furthermore, he can secure the ball nicely under pressure which helps him in every position. Simple turns like in that example are a valuable skill for Kai Havertz to prevent the defender from winning the ball.

With Kai Havertz, Joachim Löw selected one of the most talented players for the upcoming games against France and Peru. Without Mesut Özil Germany needs a player who can occupy the space between the lines and give the German team solutions against deep defensive blocks. Kai Havertz clearly offers those skills and can, therefore, help the DFB-team. Together with Julian Brandt, he could not only form a dynamic, dangerous duo at Bayer Leverkusen but also in the national team. All in all, if you want to see the best young talents in Europe you should follow Kai Havertz’s development.