After being linked with several left full backs to replace the ageing Marcel Schmelzer, the rumours surrounding Borussia Dortmund and Nico Schulz finally stuck. The former Hoffenheim wing back signed a long term deal just as the season had finished, thanks to more excellent work from sporting director Michael Zorc, and despite the need for a full back, the choice of Schulz was an interesting one from Dortmund. After an injury riddled spell at Borussia Mönchengladbach, Schulz’s career appeared to have taken another downturn when he was sold to Hoffenheim for only three million euros, but Julian Nagelsmann’s fresh approach and new role at left wing back pushed him to new heights this season. In this tactical analysis, I’ll look at his best role and how he may or may not fit in at Dortmund.

As said, Schulz operates best as a left wing-back and is an excellent offensive player. His basic stats this season have in all honesty let him down, with only one goal and five assists in the Bundesliga this season. His lack of assists can be put down to Hoffenheim’s famed lack of quality in front of goal this season, which saw them have more expected goals than anyone in the league other than Bayern Munich and also saw them strike the woodwork a league high 27 times.

Schulz’s role in the teams he plays in are clear, stay wide, overlap and get crosses into the area. This is helped by Hoffenheim’s style of play and in particular the amount of players they can commit onto the oppositions back line thanks to their formation. Hoffenheim’s 3-4-3 makes them able to create situations like the one below, where they prioritise and overload one side of the box. Here the number nine occupies the right full back, allowing (number seven) Nico Schulz a run into free space. This is extremely difficult to defend against, as it is effectively a 5v4 in Hoffenheim’s favour and if the opposition push across to cover Schulz, the opposite wing back then has the same space Schulz has. 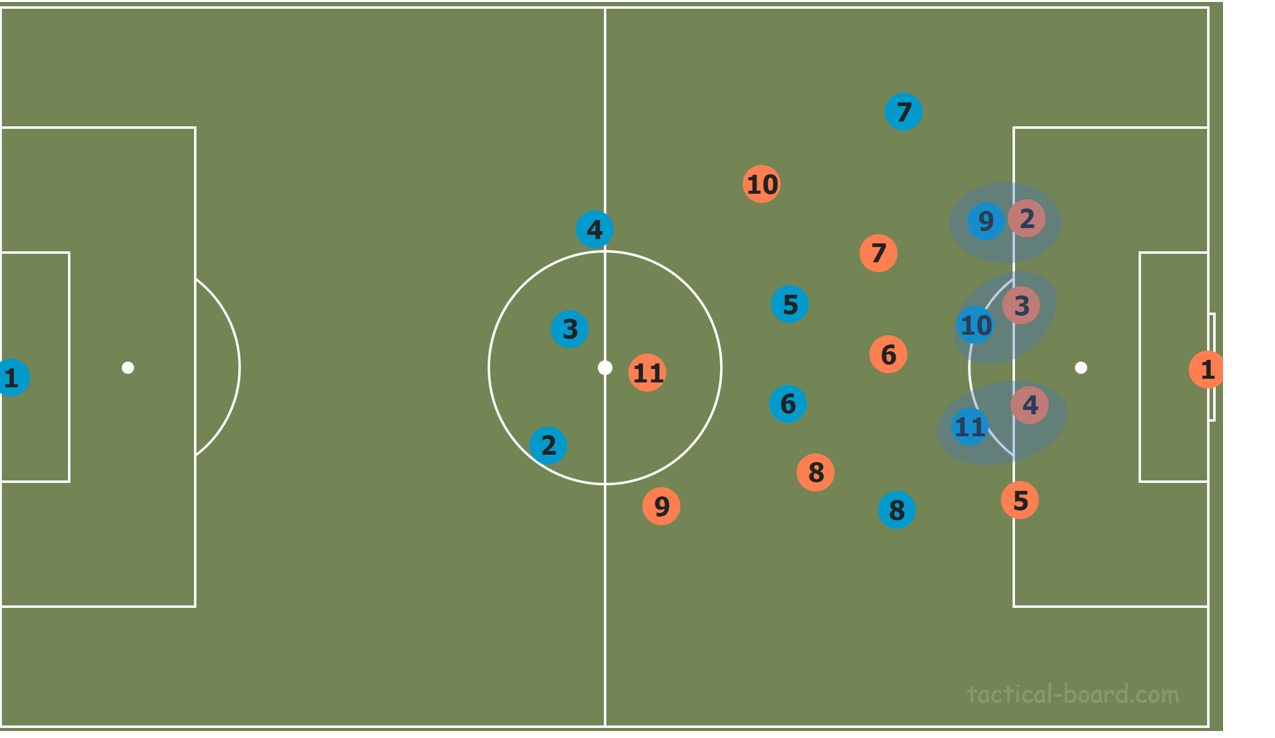 We can see an example of this situation below in Hoffenheim’s Champions League game against Lyon. Here Kramaric occupies the full back while the other two forwards occupy the centre backs, and so Schulz can make an untracked run from deep to deliver a cross, which ultimately ended in a goal for Joelinton and an assist for Schulz.

This same tactic of overloading the full back with an overlap could still be used by Borussia Dortmund despite not playing with a three at the back formation. This will all depend on the capabilities of the Dortmund central midfielders, in particularly, there ability to stop transitions into the spaces. Overall, his role won’t change greatly if Dortmund stick to four at the back, but instead the amount of cover behind him will decrease. If Dortmund master their counter press in order to stop counter attacks into the areas left by himself and Hakimi, teams will struggle to cope with them. Of course, Schulz’s role will change game by game depending on the characteristics of his opponents, but overall not much change should be noticed other than his narrower, deeper starting position.

We can see below the space Schulz (number five on the diagram) may leave when overlapping. However, as I will mention, his speed allows him to take up a deeper starting position so if the ball is lost before he has made his run, he is in a better position to deal with the transition. 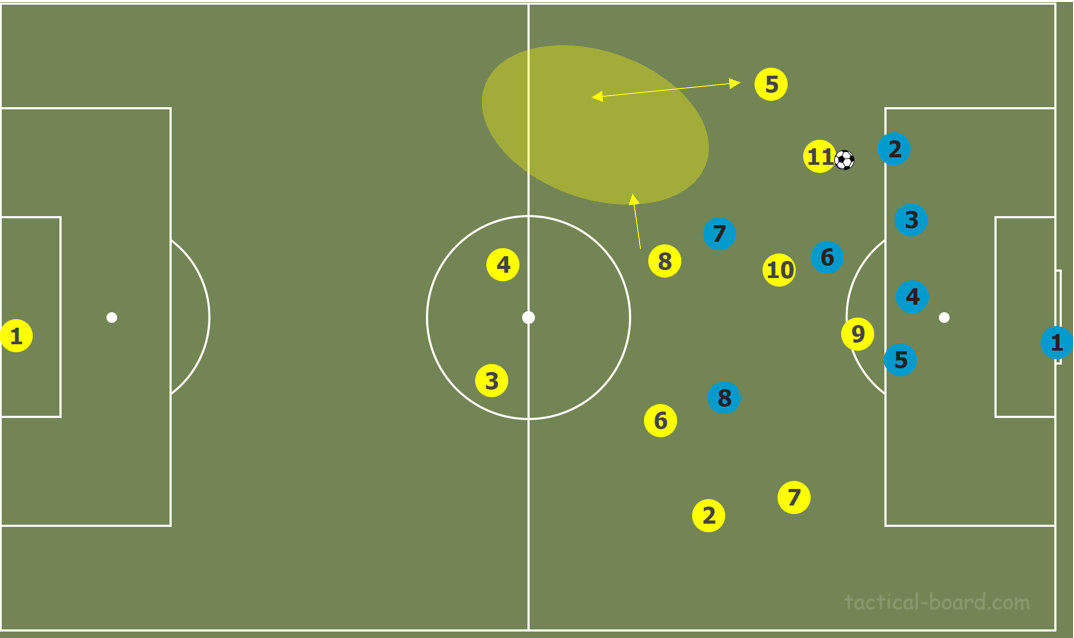 Schultz’s physical attributes should help him at Dortmund

If Dortmund are to play Schulz as a full back, his physical attributes should enable him to do so. His pace allows him to make recovery runs effectively, which is something he will have to do more often as a full back, and his pace also allows his positioning to receive the ball to adjust. Deeper positioning such as that in the image below may become more of a common occurrence for Schulz at Dortmund, in order to improve his defensive transitions.Schulz is able to receive the ball in these positions and affect the game as his pace allows him to run into space before the opposition can recover and protect that space.

These runs occur regularly in games, which is one of the reasons Schulz is in the top 20 for sprints made this season in the Bundesliga.

A slower full back, such as Marcel Schmelzer wouldn’t cause much of a problem with his dribbling here as he would not be able to drive into the space before the opposition could cover it. This pace Schulz possesses also makes him difficult to contend with in 1v1 situations.

Once in these positions, Schulz can also deliver an excellent early cross from deep which makes him a capable offensive full back.

The images below show Schulz’s clear ability in transition and therefore show why if his fitness is maintained or improved Schulz is capable of playing in a similar role for Dortmund as he did for Hoffenheim, just with slightly deeper positioning.

Notice the times between each image, with Schulz remaining on the ball through both images. Dortmund can use this pace to work both offensively and defensively, as Schulz should be able to position himself more offensively with the knowledge that he can recover into a defensive position quickly if a transition occurs. 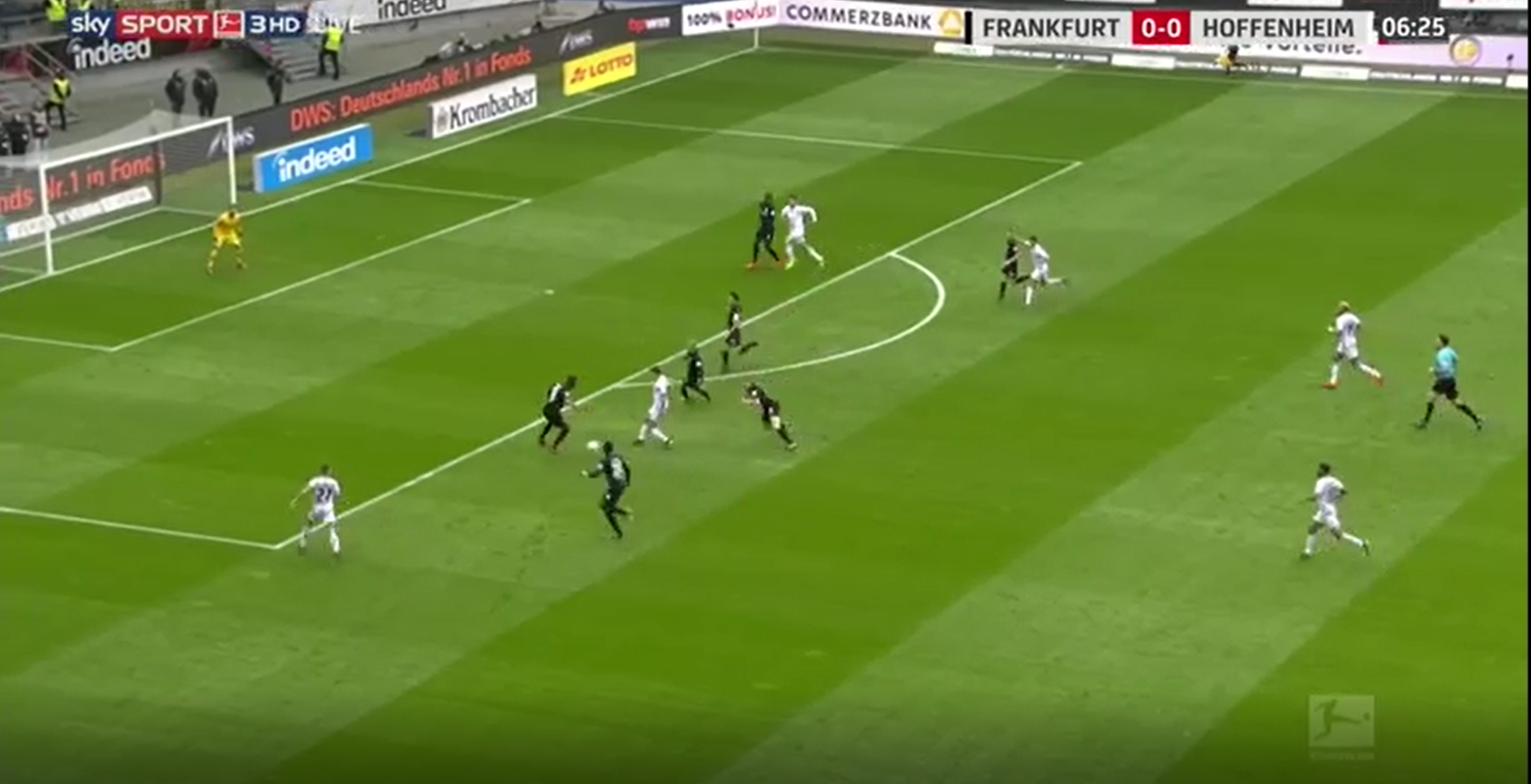 Overall, I believe this is an excellent signing by Dortmund which proves their intent to challenge Bayern for the Bundesliga next season. Schulz is one of a number of talented German full backs emerging in the Bundesliga and through reuniting with the coach who signed him for Mönchengladbach, Schulz should continue to improve and cement his place in the German national team.