Borussia Dortmund hosted Fortuna Düsseldorf in a match that had a massive effect on the Bundesliga title race. Die Schwarzgelben were holding on to a hopeful lead at the top of the table for a majority of the season, but recent inconsistencies in results, including a crushing 5-0 loss to Bayern Munich, had caused them to drop four points below the German giants with only two matchdays remaining.

Düsseldorf meanwhile are looking to finish the season as high as 10th place after getting promoted last summer by winning 2. Bundesliga. The effective tactics set in place by manager Friedhelm Funkel has seen the club defeat much bigger sides such as Hoffenheim, Dortmund in their first meeting of the season, and Borussia Monchengladbach.

With Bayern fighting to a 0-0 draw against RB Leipzig that same day, Dortmund seized the initiative and won a thrilling 3-2 victory over their fellow North Rhine-Westphalians. 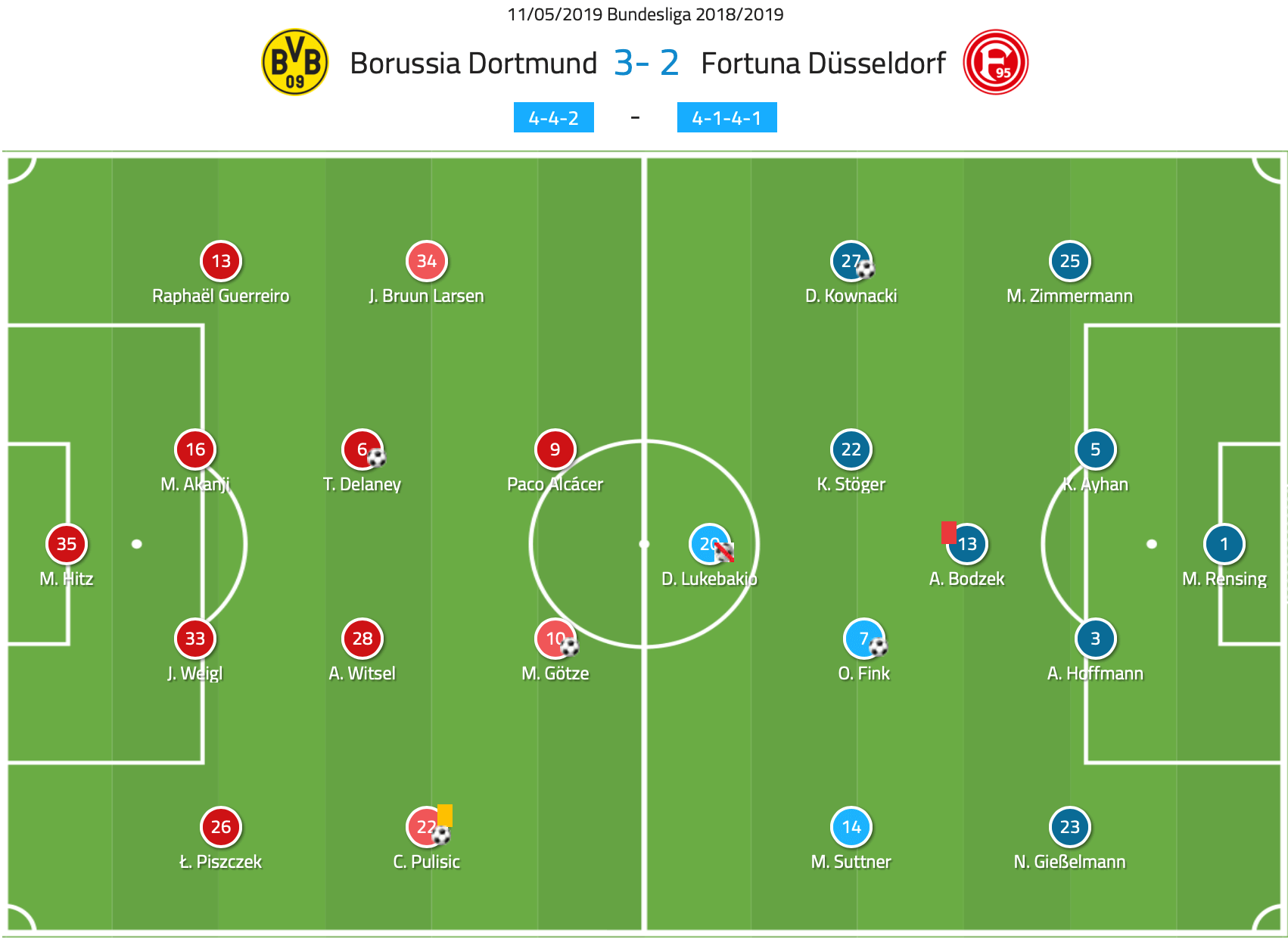 Manager Lucien Favre opted for a 4-4-2 formation which commonly flowed into a 4-2-3-1 with Paco Alcácer pushing forward ahead of Mario Götze in attack. Jacob Bruun Larsen replaced Jadon Sancho in the starting eleven, though Sancho would substitute on for the Danish winger in the 61stminute. Christian Pulisic lined up in his typical right winger position in what would be his final home match at Signal Iduna Park. The young American signed a contract in January to join Premier League side Chelsea in the summer. Łukasz Piszczek returned to the lineup with injuries and suspensions hampering the back line, shifting Manuel Akanji centrally.

Düsseldorf came out in their common 4-1-4-1 formation; a shape useful for transitioning from a stable defensive block into a fast counter-attack. Dodi Lukebakio returned to the front of that attack after coming on as a substitute in his previous match. The 21-year-old Belgian has had an excellent first season as a consistent starter, highlighted by a hat-trick against Bayern in midseason. Kevin Stöger starred in Düsseldorf’s midfield, as he has been the primary transition man in Funkel’s system.

Dortmund were patient both in their defensive system and their build-up for primarily two reasons: they were cautious against conceding an early goal and were going up against a side that has become known for being extremely effective in utilising counter-attacks from a deep block. Despite allowing the third-most goals against in the Bundesliga, Düsseldorf has blown away expectations this season and are currently sitting comfortably in 11th place on the table. It was for these reasons that Favre deployed a 4-4-2 formation in defence. 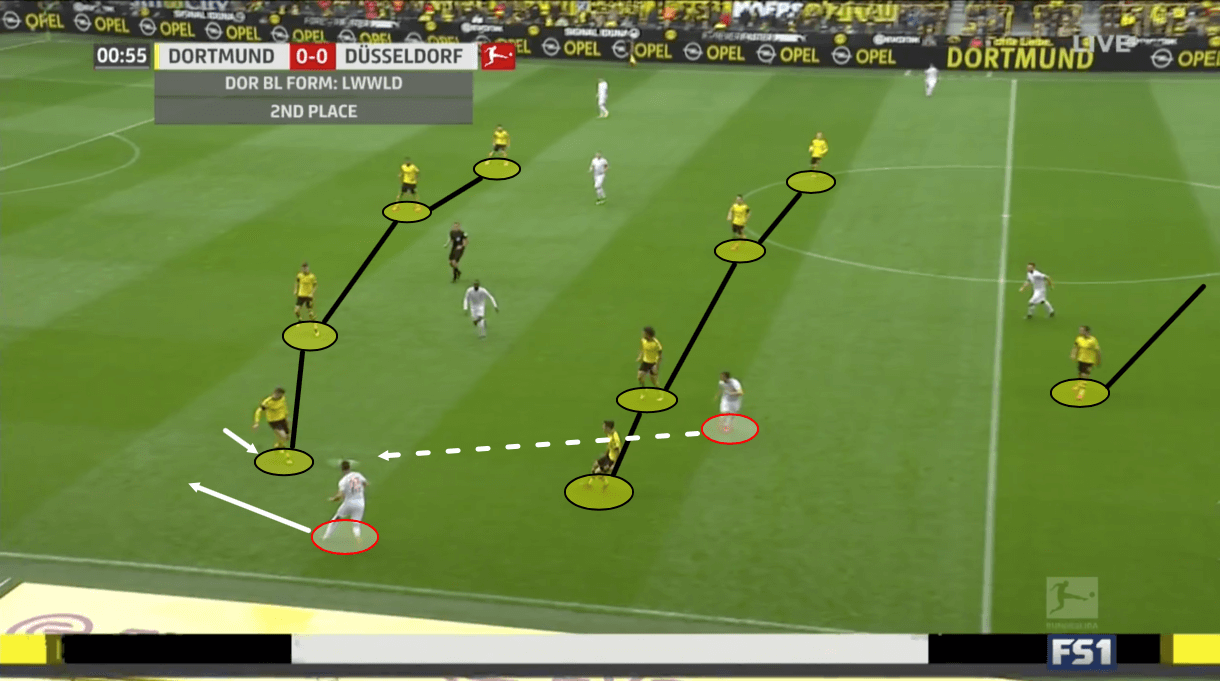 Düsseldorf attempt a quick attack between the lines but Piszczek intercepted the pass in Dortmund’s 4-4-2 formation. Favre was smart to limit Dortmund’s defensive pressing. The Swiss manager wanted his players to maintain shape, so when a press wasn’t working, he instructed the front players to fall back into line. As a result, Dortmund were effective at preventing shots from Düsseldorf’s quick attacking style, holding the away side to only one shot on their six counter-attacks. 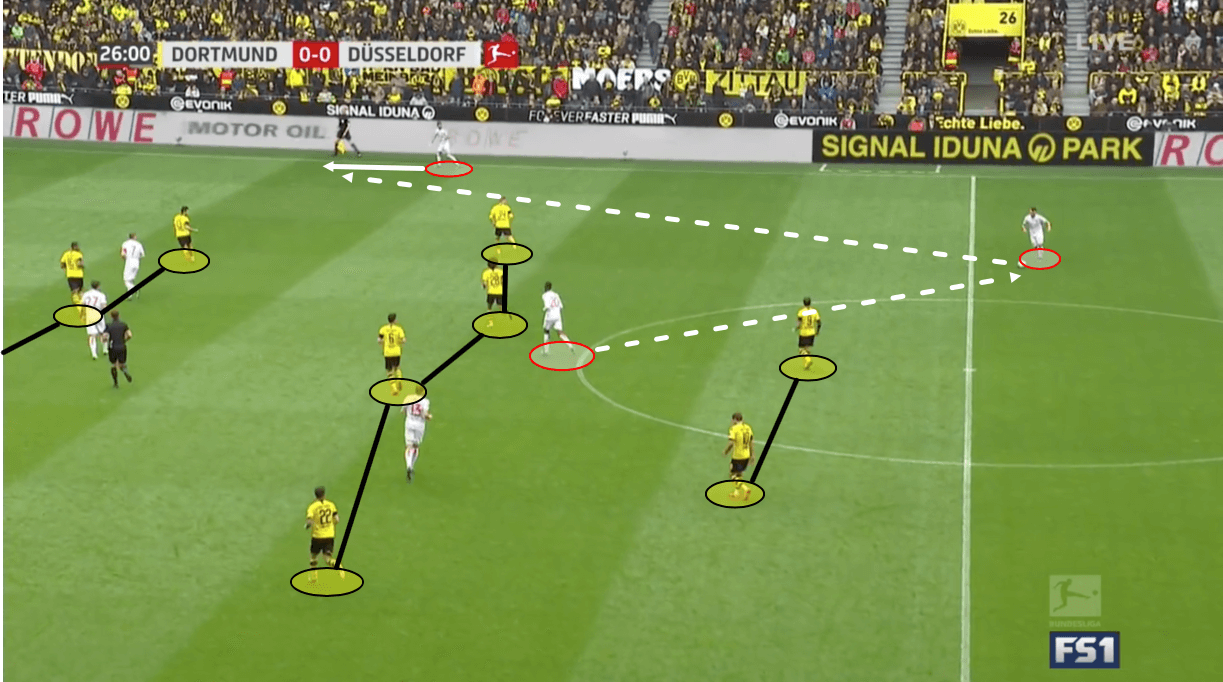 Stöger receives a back-pass in a failed attempt to bait a press. He then immediately makes a long pass down the right touchline. 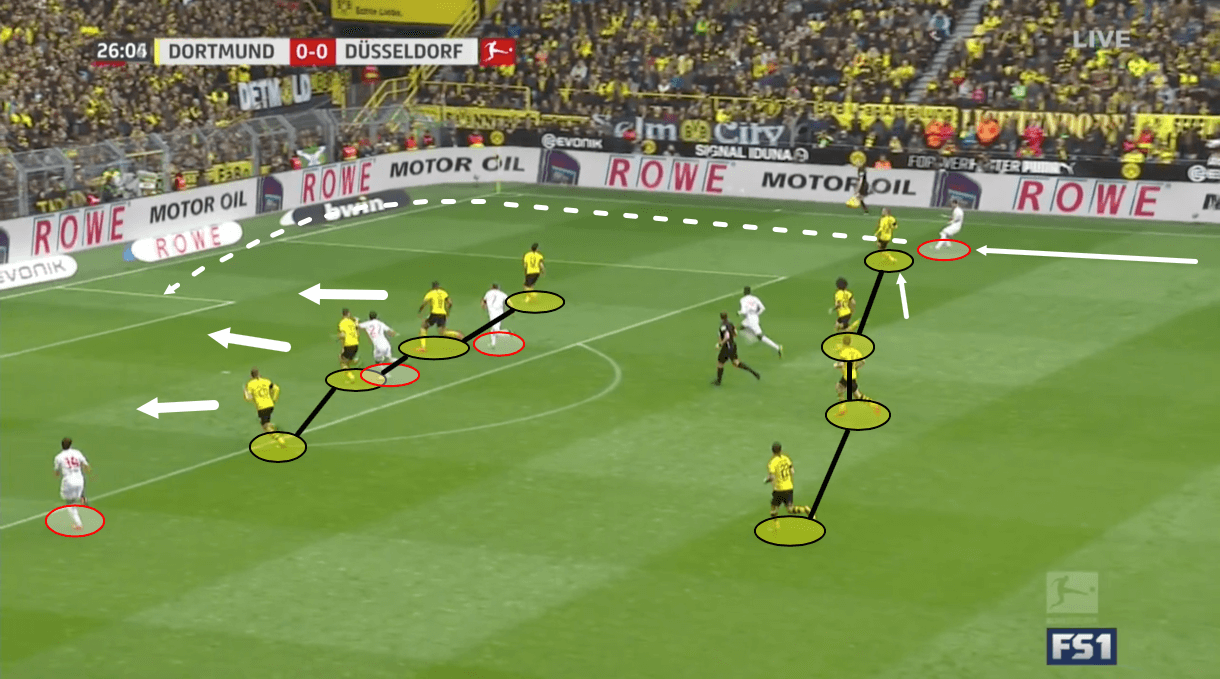 Even with Dortmund staying disciplined in defence, Düsseldorf’s few attacks came swiftly. This cross came only about four seconds after Stöger received the ball behind the halfway line. Progressively, Dortmund settled into possession with Düsseldorf sitting in their own half. Borussia remained organised even when on the ball. 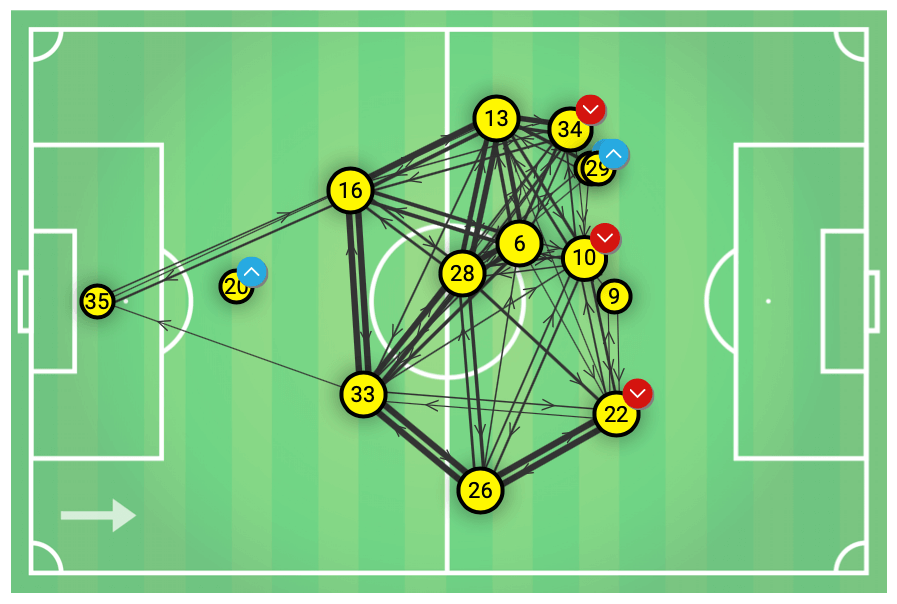 Dortmund’s passmap. The back four held the structure together, connecting well with the two centre-midfielders and the wingers. This discipline allowed Dortmund to control the pace for much of the match while on the ball. Directing play around or through a low defensive block can be very difficult. The goal of such a defensive scheme is to choke off as much space in front of your own net as possible, and Düsseldorf were successful in this at times. Dortmund however eventually found a consistent way around it.

Getting around the deep block

While playing against a deep block, attacking space is extremely limited. Usually, there are patches of open areas on either side of the opposition’s 18-yard box and in front of it. So, Dortmund decided to attempt to break up the block by exploiting these areas. 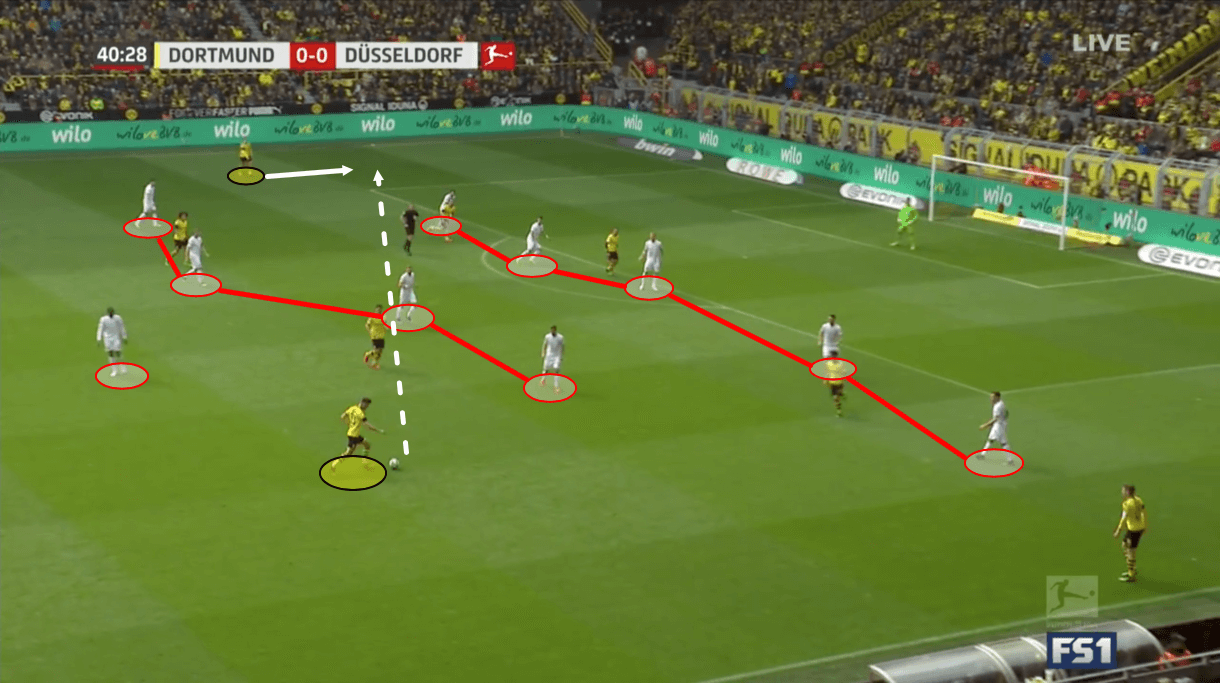 Dortmund initiated a number of attacks with switches of play. 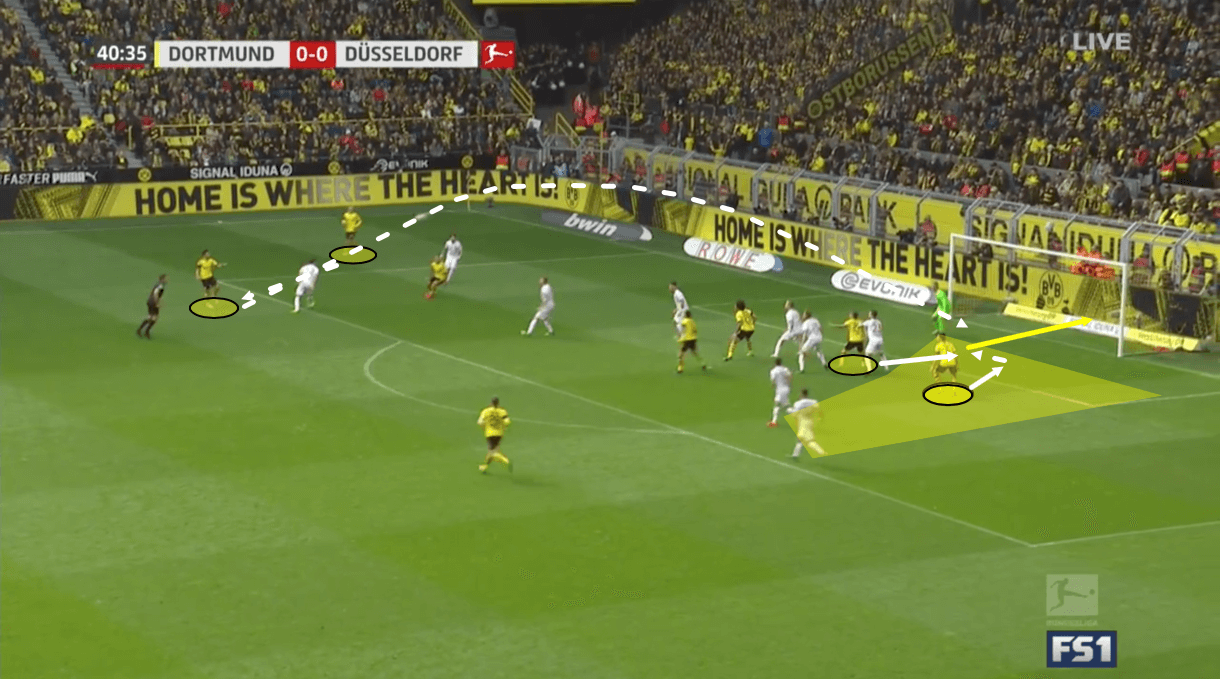 This specific switch of play opened up space on the other side of the deep block. Another switch of play returned the ball to that space, where Thomas Delaney assisted Pulisic on the opening goal. Pulisic’s goal put Dortmund ahead, and the winger had to refrain from getting too emotional in the middle of his final match in front of the Yellow Wall. This tactic was used multiple times to get around the deep block.

The first half was largely a crescendo of the two playing styles feeling their way around the opponent.

Shortly into the second half, Düsseldorf scored on a goalkeeping error by Dortmund’s Marwin Hitz after a rare takeaway in Dortmund’s half. The majority of Düsseldorf’s recoveries began in their own half.

Dortmund became more imposing in their possession. They comfortably continued passing the ball around Düsseldorf’s defensive third. Late in the match, with the score at 2-1, Dortmund began more direct approaches to Düsseldorf’s defence. These disrupted the opponent’s structure and opened up enough space for individual skill to exploit centrally. 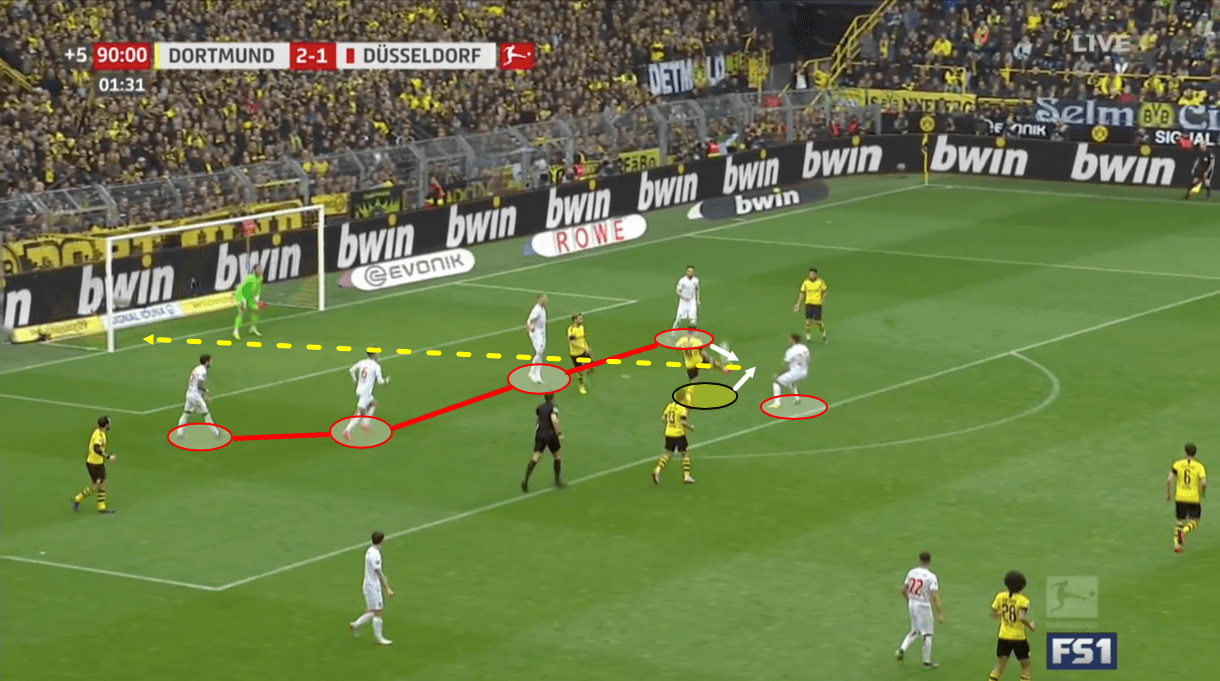 Götze was a late match hero once again as he controlled the ball between Düsseldorf’s defensive lines which had been greatly weakened by Dortmund’s constant attacks. The German attacker scores a skilled goal to secure Dortmund’s victory. In the final minutes of the match, Dortmund shifted shape to return to one final defensive stand. Düsseldorf, however, have scored 14 of their 47 goals this season- nearly 30%- in the final fifteen minutes of play, and one such goal would come in this match. 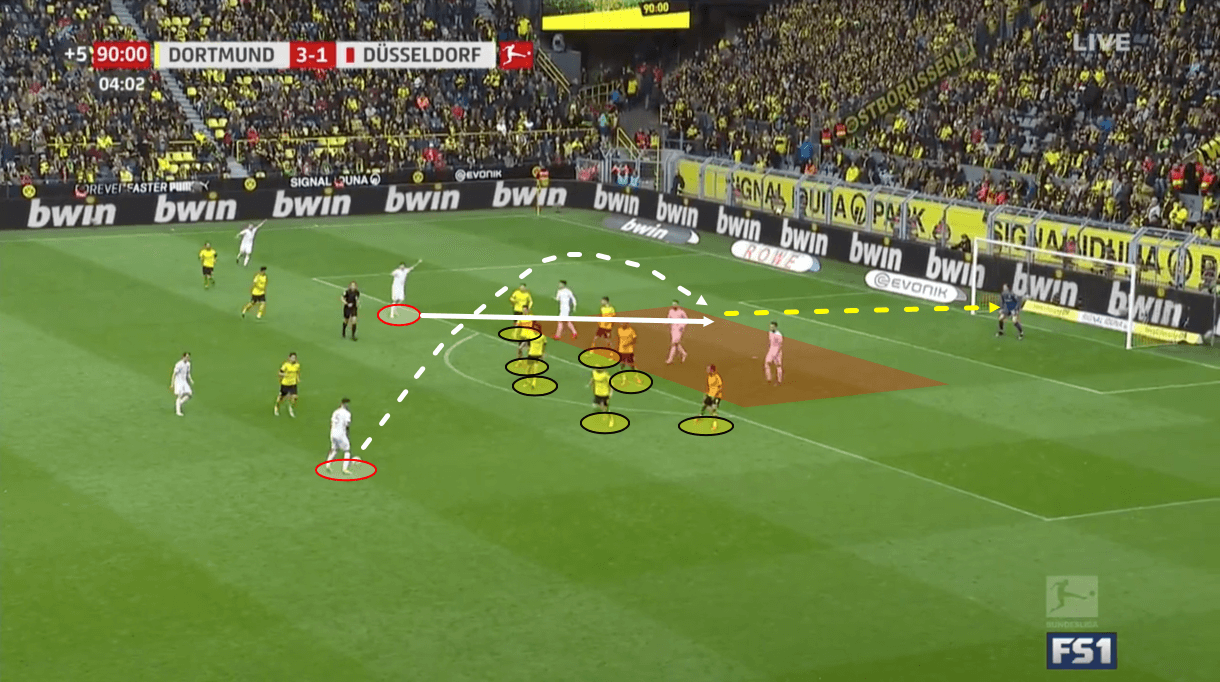 Dortmund’s defensive organisation was poor on Düsseldorf’s second goal, with Dawid Kownacki making a smart run behind the opposition into open space. Despite the comeback attempt, Dortmund had done enough to hold off Düsseldorf and claim their 22ndwin of the season, only one behind Bayern.

“We have given the Bundesliga a final on the last day. That is good for the league and we are proud of that. We have been under brutal pressure, but now the pressure is heading south. Bayern have it all to lose, we can only win.” – Dortmund CEO Hans-Joachim Watzke

Just when it looked like the Bundesliga title was out of reach, an unexpected scenario occurred. While Bayern claim the superior goal difference, Dortmund are only two points behind the Bavarians. Neither club’s last match will be easy: Bayern host 6thplace Eintracht Frankfurt who have been one of the hottest teams in the league this season, while Dortmund travel to Borussia-Park to take on 4thplace Monchengladbach. Both opponents are fighting for a Champions League spot on the table. Favre and The Black and Yellows will surely carry the disciplined momentum from this victory into their final chance to win their first Bundesliga title since the 2011-12 season and break Bayern’s stranglehold on the Meisterschale.