In a huge clash at the Red Bull Arena, RB Leipzig and Bayern Munich met for a game with potentially huge permutations in the Bundesliga title race. A win for Bayern would have seen them clinch the Bundesliga title, while Leipzig, although with nothing to play for with 3rd place secure, were out to ruin Bayern’s title hopes and give Borussia Dortmund a chance to win the title on the final match day.

Of course, neither side was able to find the back of the net other than a controversial Goretzka goal, and so both sides left the game wondering if they could have done more and taken all three points. In this tactical analysis of a fascinating game, I’ll look at Leipzig’s versatile build-up play, Thiago’s role in the game and how RB Leipzig were able to hinder Bayern’s build-up play for large parts of the game and secure a point.

RB Leipzig went with a 4-1-2-1-2 formation against Bayern’s 4-2-3-1 as we can see below. This large emphasis on central areas of the pitch for Leipzig was key in their ability to press Bayern high up the pitch and cut their build-up options, as I will discuss later. 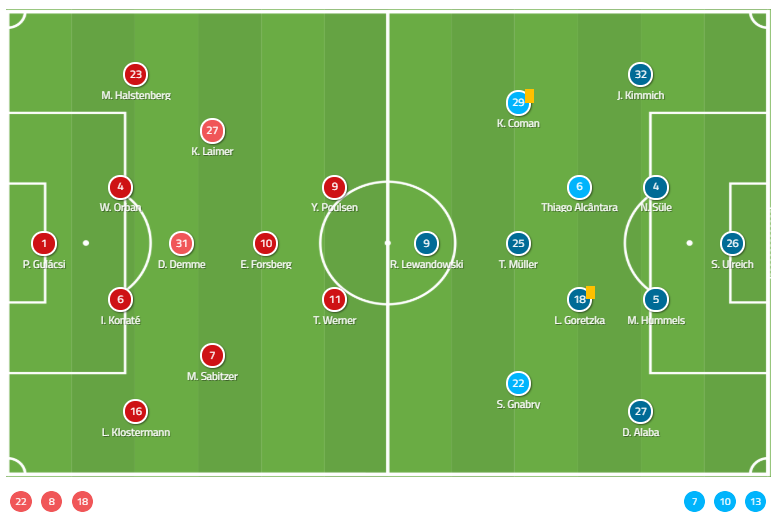 The personnel Leipzig have available to them makes them a very difficult side to play against when out of possession. At the back, they have full-backs in Klostermann and Halstenberg who are very comfortable on the ball, as well as Konaté, who is an excellent dribbler of the ball and is also confident enough to receive the ball under pressure. This makes Leipzig difficult to press as it is, of course, difficult to win the ball from players with these qualities.

We can see below Orban drops to receive the ball, attracting a press from Bayern with a large central space. This could be easily exposed by Leipzig’s central overload if Bayern’s central midfielders did not step in as they do not below. This meant that if Bayern did not step up to press, Leipzig could beat the initial press easily.

When Bayern did step up to press, Leipzig found it much more difficult to play out from the back, but Leipzig wanted Bayern to step up and press them so they could use another weapon in their build-up arsenal: Yussuf Poulsen.

Poulsen lies second in the Bundesliga for aerial duels won, and so when Bayern chose to press higher and commit players forward, Leipzig chose to play a long ball to Poulsen who won the aerial duels and could then play the ball to Werner and the transitioning midfielders.

We can see below that Bayern push high to press Leipzig, with Konaté being left open to receive the ball as a trap in order to trigger Bayern’s press, while Leipzig’s dropping midfielder is man marked to prevent him from receiving the ball. Notice how only very few Leipzig midfielders drop in order to improve their position to help the next phase of the attack.

So often, in situations like this, Bayern were left pleased with their press as the goalkeeper would go long and give the ball back to them. However, when RB Leipzig chose to play longer passes up to Poulsen, he could win the aerial duels and combine with the players around him, as we can see below. Poulsen pins the centre-back excellently and holds the ball up, and with Leipzig’s midfield in good positions to combine with him, they could advance up the pitch.

As mentioned Leipzig’s formation allowed for them to conduct a well organised efficient press which limited large amounts of Bayern’s build up. Their shape in the press was superb and Bayern were often forced to play the ball long, where Leipzig’s tall, strong backline was able to regain possession.

Below, we can see Leipzig’s initial shape when Bayern’s centre-backs have the ball. With both Werner and Poulsen pressing the centre-backs while cutting the passing lane to the full-backs, they force a central pass. This central pass is covered by Forsberg who occupies this central zone and presses any player entering it. Leipzig’s two midfielders behind Forsberg, Sabitzer and Laimer, then cover the Bayern midfielders not dropping to receive the ball. This leaves Demme out of shot just in front of the back four allowing him to pick up any loose balls or deal with Bayern if they evade the press. 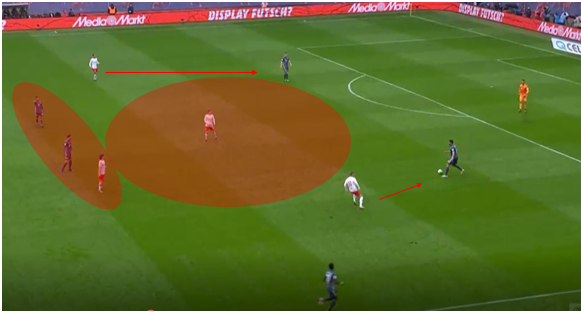 In the example below, we can see what happens when a player drops into Forsberg’s space, with Leipzig in the same shape highlighted in the image above. Forsberg follows Thiago who goes to receive the ball, forcing a backwards pass to the centre-back. The centre-backs were then forced to play the ball long or to play laterally to the full-backs if possible. Leipzig’s central players could then move wider to press the full-back and the strikers could drop back to occupy the central space. Bayern needed to drop deeper in order to create overloads that would enable them to beat Leipzig’s press, but Coman and Gnabry refused to come deeper to receive the ball.

The role of Thiago

As the game progressed Thiago started to have a greater influence as he started to drop deeper to receive the ball. Below we can see Thiago drops to become a part of the back three in order to escape Forsberg’s press. He is then given slightly more time on the ball and is able to pick out excellent passes like the one highlighted below, which bypasses four Leipzig players.

On a more general level, Thiago was simply the key to most of Bayern’s build up, showing his quality in tight situations such as the one below. Thiago is somehow able to create an angle to play the pass through and simultaneously move the ball past four Leipzig players in the example below. This kind of quality was lost when Thiago was substituted with ten minutes remaining, and Thiago was in my opinion justifiably angry to be leaving the pitch at such a crucial point in the game.

Overall, Bayern will feel hard done by as a result of the dubious offside decision but Leipzig’s performance was deserving of a point on the day. Their pressing and off the ball work was a joy to watch and I personally cannot wait to see what the future holds for such a promising side, particularly with the recruitment of Julian Nagelsmann.