How did Bayern Munich run riot on Borussia Dortmund?

The 100th edition of Der Klassiker in the Bundesliga came with heightened stakes. Borussia Dortmund jumped out ahead in the race for the league title during the first half of the season. The side from northwest Germany has been led by a collection of young attackers, such as Jadon Sancho and Christian Pulišić, who is due to leave for Chelsea in the summer.

However, Bayern Munich have closed the gap in the second half of the season. Having taken 25 points of an available 30 since returning from the winter break, the side from Bavaria have become the favourites in recent weeks to take their seventh straight Bundesliga title.

Former Eintracht Frankfurt manager Niko Kovač has not had a smooth first season at the Allianz Arena. After the struggles of the first half of the season in the league and elimination from the UEFA Champions League by Liverpool in the round of 16, Bayern Munich still have a chance to complete a domestic double with the DFB Pokal and Bundesliga title.

This match in Bavaria looked like a title decider. A Borussia Dortmund victory would have left Bayern Munich five points behind with only five matches to play. Unfortunately, Dortmund haven’t had much success during their visits to Munich, with the Bavarians winning the last four home league matches by an aggregate score of 17-3. This trend continued, as BVB appeared out of sorts en route to an emphatic 5-0 defeat.

Bayern were able to take a 2-0 lead in the first 20 minutes, with both goals coming from former Borussia Dortmund players Mats Hummels and Robert Lewandowski. The traffic was almost all one way, and Bayern Munich were able to slice through at will. Dortmund’s backline appeared adrift, and there was no better example of this than the second goal when young Dan-Axel Zagadou attempted an ill-advised pass that was easily intercepted by Lewandowski, who took two touches before easily slotting the ball past Roman Bürki.

After the first 45 minutes, Bayern had a 4-0 lead and were comfortably in control. The second half fizzled out, as they were content to just control possession. They added a fifth goal in the 89th minute, ending the match with an easy looking 5-0 victory that has left Borussia Dortmund looking unlikely to claim their first league title since 2011-2012. 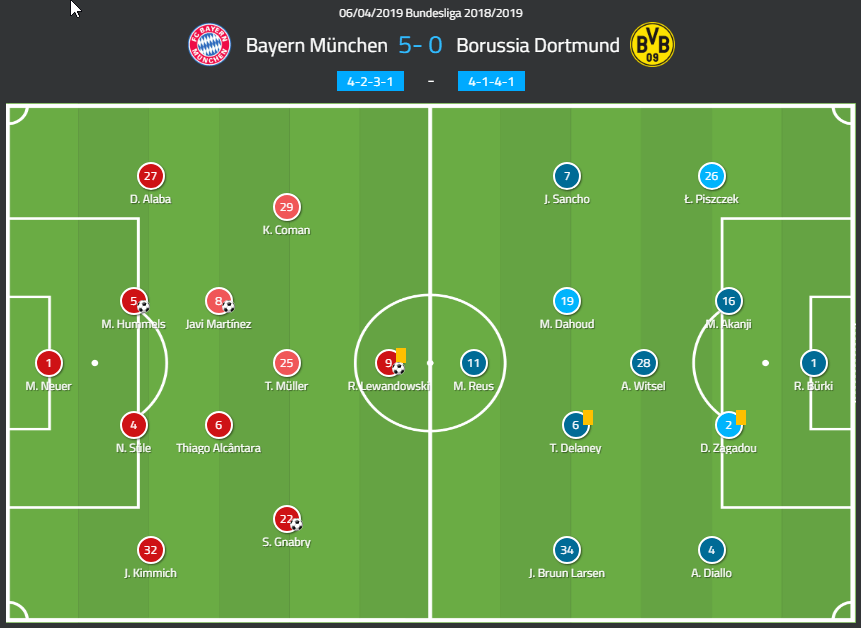 Niko Kovač made five changes to the side that played an incredible match in midweek against FC Heidenheim in the quarter-finals of the DFB Pokal, playing 87 minutes with 10 men before eventually winning 5-4 to advance to the semi-finals. Manuel Neuer returned as the starting goalkeeper, with Sven Ulreich going back to the bench. He was joined on the bench by Rafinha, who gave up the starting right-back slot to David Alaba. James Rodriguez, Leon Goretzka, and Franck Ribéry also lost their starting positions, replaced by Javi Martínez, Kingsley Coman, and Robert Lewandowski.

Borussia Dortmund had no midweek fixture, as they were eliminated from the DFB Pokal by Werder Bremen in February. Lucien Favre made four changes from the side that won 2-0 at home to Wolfsburg a week earlier. Łukasz Piszczek returned from injury to start at right-back, replacing Marius Wolf. Raphaël Guerreiro and Mario Götze lost their berths in the midfield to Jacob Bruun Larsen and Mahmoud Dahoud.

The biggest miss for BVB was an injured Paco Alcácer, who averages a goal every 60 minutes in league play. The striker, who is on loan from Barcelona, leads the club with 16 Bundesliga goals. Alcácer’s replacement was Marco Reus, who had to play as a false nine.

This match was controlled by Bayern Munich from start to finish, and this article will show how Thomas Müller and the Bayern midfield caused constant problems for BVB’s midfield. We’ll also examine how Bayern were able to counter-press Borussia Dortmund to keep the pressure on the visitors. Finally, we’ll see how Dortmund struggled to deal with an overwhelming Bayern attack.

As the home team, Bayern Munich were expected to have more possession, and this proved true. Borussia Dortmund didn’t press Munich, instead preferring to sit in a low block and not engage the Bavarians until they crossed the halfway line. BVB sat in a 4-5-1, with Axel Witsel sitting in the defensive midfield role, with Dahoud and Thomas Delaney stationed ahead of him. Their main task was to close down the deeper Bayern midfielders, Javi Martínez and Thiago Alcántara.

Thiago did an excellent job moving laterally to find spaces away from his markers. He also did well to use his ball skills to evade his markers and cause problems for Borussia’s midfield. As we can see in the images below, Thiago has moved into the right half-space to receive a pass from Niklas Süle. Thomas Delaney comes out to close him down, but Thiago is able to bypass him with his first touch, dribbling into the middle of the pitch before spraying a pinpoint pass out to Kingsley Coman on the left wing.

Another problem for Borussia Dortmund was Thomas Müller, who formed an excellent connection with Lewandowski. Müller had success in the raumdeuter role, finding the pockets of space between the lines to receive the ball and play lofted passes and through-balls that cut Dortmund apart.

Müller had the most success on the counter-attack, as there was more space to exploit. This led to an assist on Bayern Munich’s fourth goal. In the images below, we see Lewandowski receive the ball from Thiago. Müller drifts into the right half-space, stopping just outside the penalty area as the Dortmund backline continues to retreat. Lewandowski is able to play the ball out to Müller, who can then chip the ball to the far post for Serge Gnabry to head in.

In this type of counter-press, each Bayern player man-marks the nearest opponent, with the closest Bayern player providing pressure on the ball carrier to force action. The pressure is only applied by one or two close players, with the rest of the team working to limit passing options through their man-marking.

This is a reliable metric for judging press intensity, as it shows that Bayern Munich were attempting to recover the ball early in Dortmund’s build-up, while Dortmund were allowing Munich to build up play before they engaged.

As we can see in the images below, Bayern can close down the closest available Dortmund players while also pressuring the ball carrier. This results in mistakes and recoveries that allow them  to counter-attack quickly.

One of the areas where Bayern Munich had the most success was at set pieces. The home team ended the match with 11 corners, which resulted in seven shots. The opening goal by Mats Hummels came from a corner. In addition, the third goal came from a free kick, when Javi Martínez slotted the ball home after Dortmund’s clearance fell nicely for him just outside the box.

As we can see in the graphics above, Bayern had 24 shots compared to BVB’s three. You can also see the quality of Munich’s shots, as only six of them were from outside the penalty area.

Borussia Dortmund were unable to provide much of a threat, as they struggled to get out of their own half of the pitch. In addition to the aggressive counter-press that they experienced, they also played a low defensive block with their wingers dropping deep to help defensively. Frequently Dortmund had all 11 of their players within 30 yards of their goal. Also, Marco Reus was unable to hold the ball up and this made it even more difficult for them to get out of their own half.

This match was decided by half-time, and the second half had very little of note. Neither side seemed interested in expending too much energy, as Bayern settled into fairly sterile possession and Dortmund allowed it. Lewandowski scored his second in the 89th minute to complete Borussia Dortmund’s embarrassment.

With the three points, Bayern Munich have a one-point lead in the race for the Bundesliga title. This may seem small, but the manner in which Borussia Dortmund collapsed in this match will make it hard for anybody to believe that they are going to overtake Bayern and win their first league title since 2011/12. If Bayern Munich take the Bundesliga title, it’ll be an impressive accomplishment but it doesn’t remove the need for a major overhaul for an ageing squad.