Race for top four hots up following stalemate in Milan

The race for the final Champions League spot in Serie A took another twist this weekend. AC Milan visited the Allianz Stadium to face Juventus and took an early lead through Krzysztof Piątek only to collapse and lose 2-1. In the knowledge that one of their rivals for the top four had been beaten, Lazio, Atalanta and Roma saw this as an opportunity to take advantage.

Roma did their part beating Sampdoria, whilst Lazio were held at home to Sassuolo. The most intriguing of the games that had implications on the top four, however, was Inter vs Atalanta on Sunday evening.

A win for Inter would further cement their place in next season’s Champions League. A win for Atalanta would put them in a position of power and qualification for the Champions League would be in their hands. What followed was an intriguing tactical battle, which eventually fizzled out as both teams seemed content with avoiding defeat.

In our tactical analysis, we will look at the different game plans of each side. In particular, we will look at how these two teams attempted to break each other down and take an important three points from the encounter. 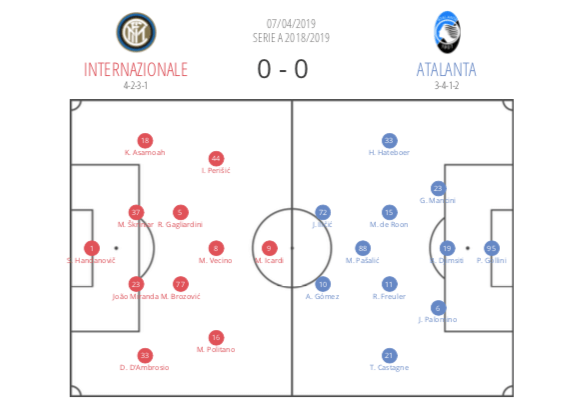 Gian Piero Gasperini set up his Atalanta side as he has done for most of the season in the 3-4-1-2 formation. Following a completely avoidable yellow card in Atalanta’s previous game with Bologna, Duván Zapata was suspended for the trip to the San Siro. Mario Pašalić came in for Zapata, with Gómez being moved higher up the field in support of Josip Iličić. Timothy Castagne came in for Robin Goosens at left wing-back. The final change came in the form of Berat Djimsiti replacing Andrea Masiello.

Following a routine yet impressive win over Genoa last time out, Luciano Spaletti only made one change to his starting XI. Spaletti opted for Matías Vecino over Radja Nainggolan in what was perhaps a marginally more industrial selection.

As is Atalanta’s trademark in Serie A, they flew out of the blocks in terms of pressing their opponent. The press is lead by the two strikers and attacking midfielder who look to block the supply line of every team they face. 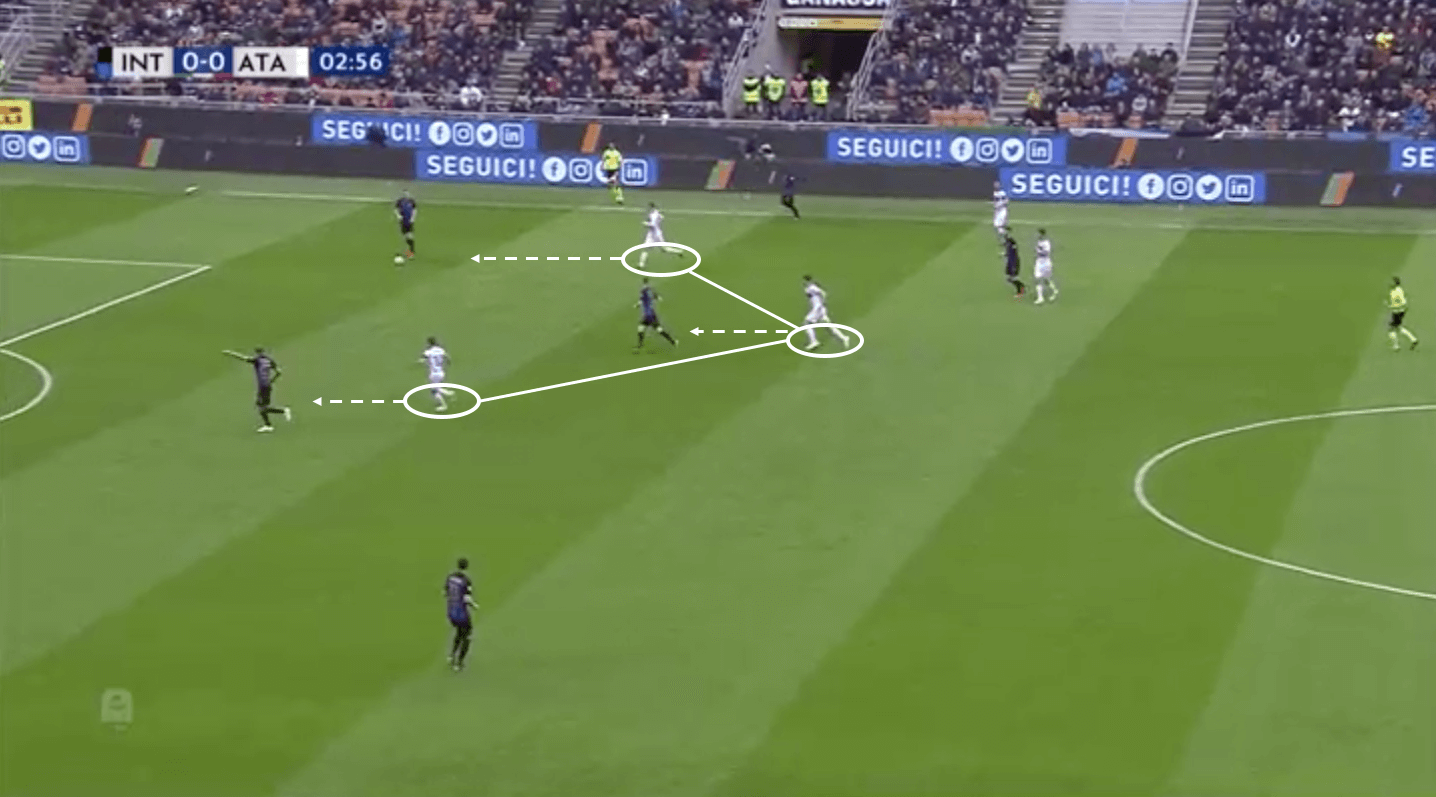 The front three form a v-shape as they press the defensive midfielder and the two centre backs. Atalanta want to prevent their opposition from building through the middle and the three attackers make it almost impossible for a defensive midfielder to get on the ball and turn into space to build an attack. In the image above, Marcelo Brozović is pressed from behind forcing him into a poor return pass to Milan Škriniar putting his teammate under pressure inside his own box. 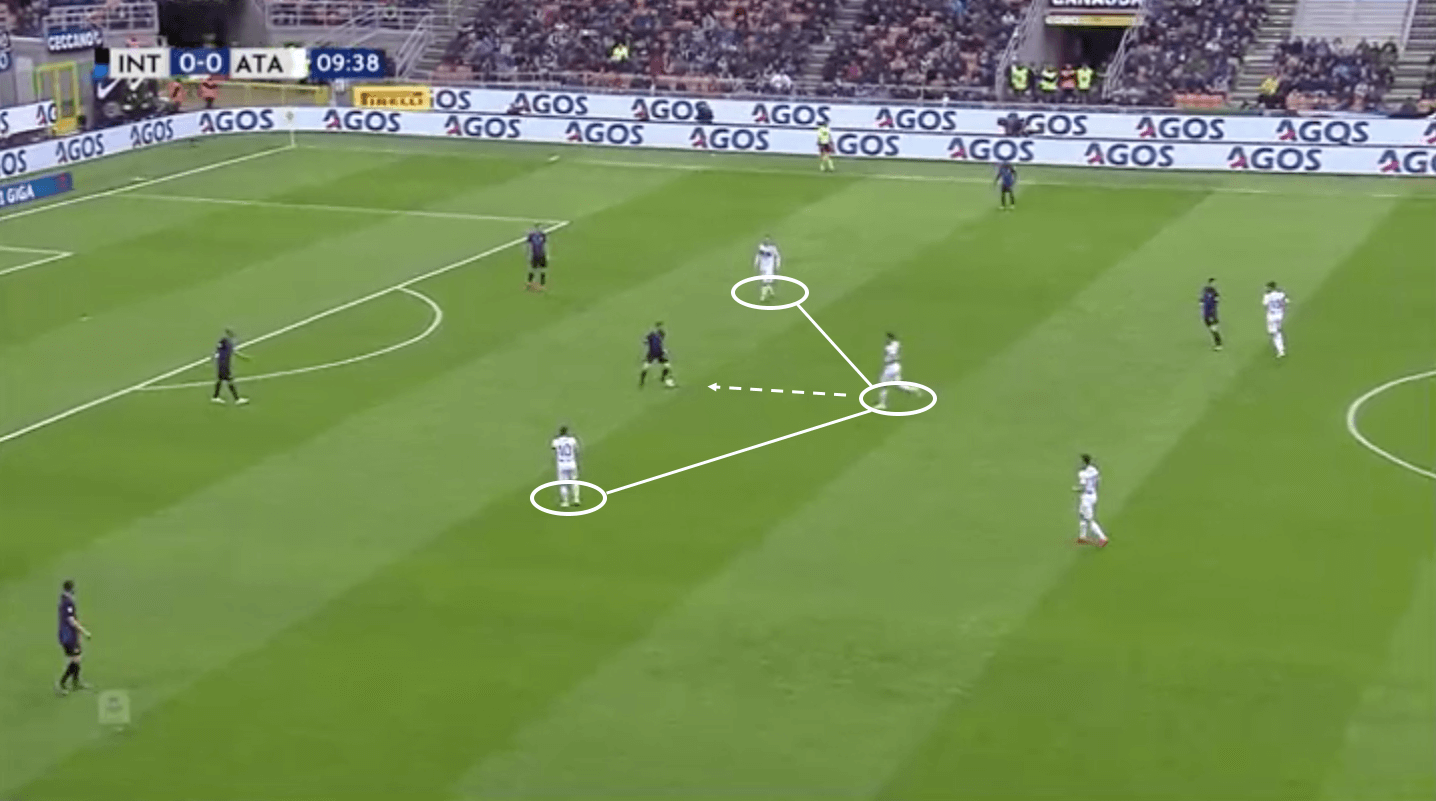 A similar situation occurs a couple of minutes later. This time Brozović has been able to turn but he is immediately pressurised and forced backwards by Atalanta’s first pressing line.

Holes in the press

What was surprising was that the usually machine-like press from Atalanta was slightly malfunctioning in this game. As a result, Inter looked to exploit the disconnect between the front three and the midfield two by playing more direct, line-breaking passes. Miranda and Škriniar, in particular, looked for these passes with greater regularity. 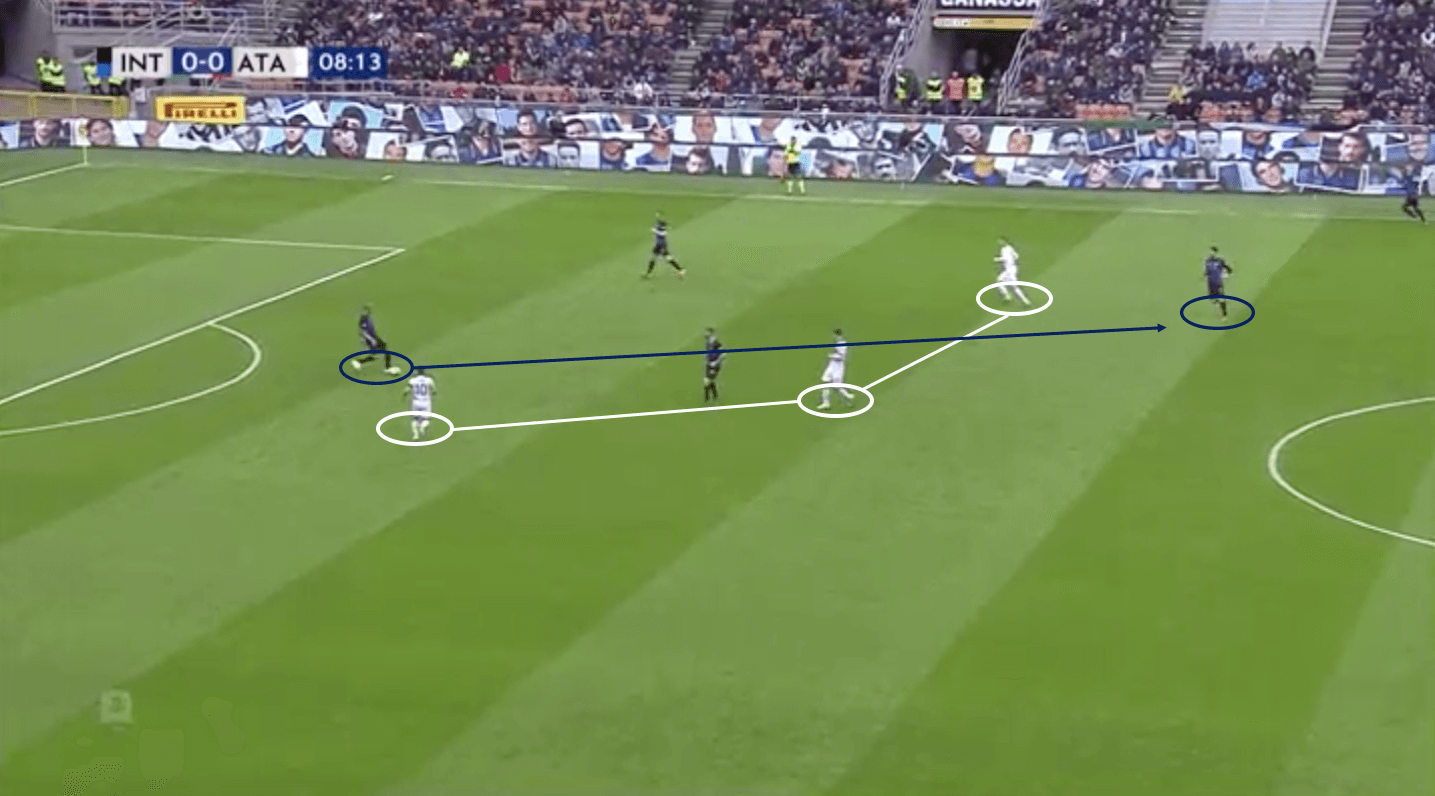 Atalanta again look to work the v-shape between the front two and attacking midfielder. However, the three men are slightly more disjointed in this image, with the spacing between them being larger. Roberto Gagliardini has dropped a little deeper to provide a second passing option for Miranda. Miranda finds the young Italian midfielder and in the process bypasses three Atalanta players, taking them out of the game. 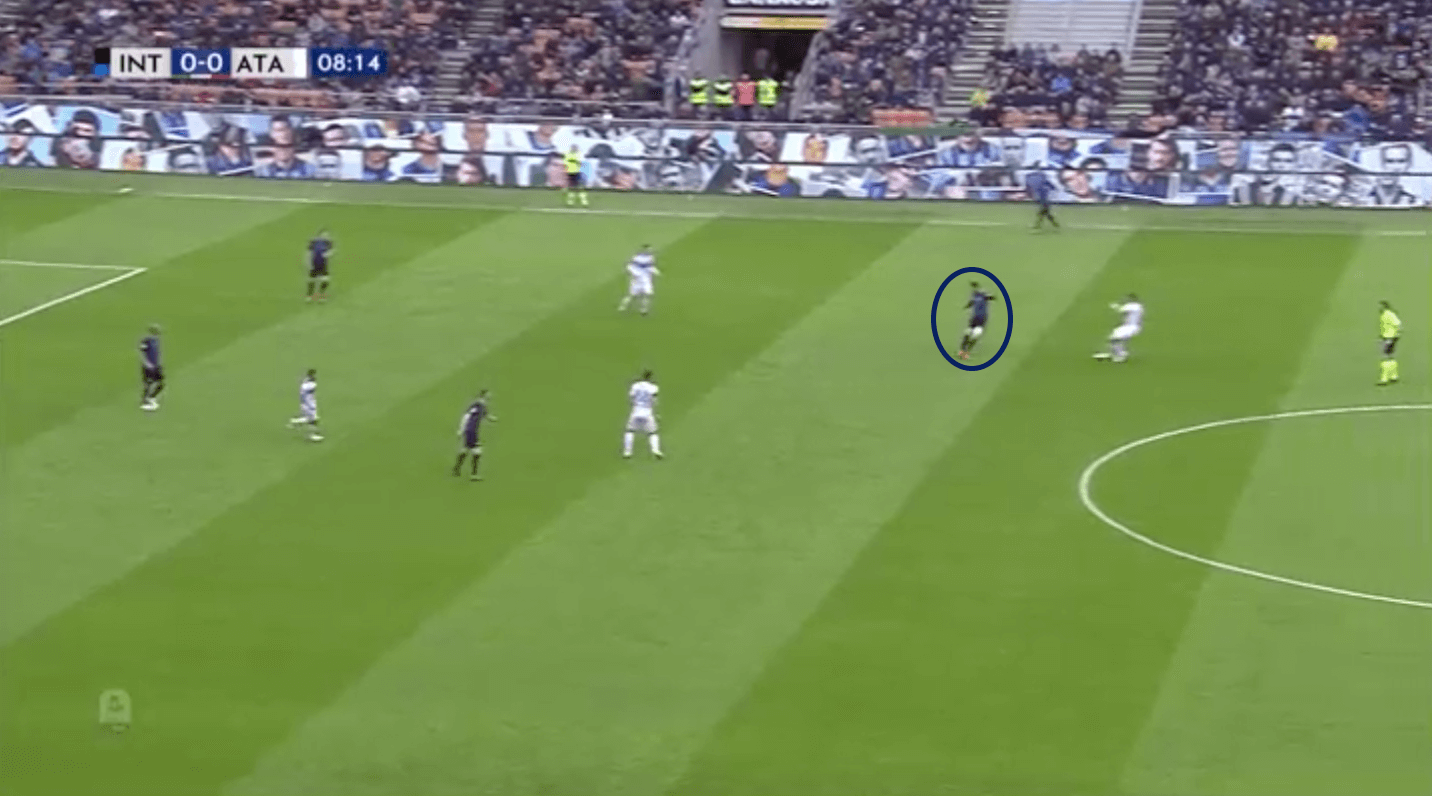 Gagliardini intelligently flicks the ball first time up towards Icardi. This prevents Atalanta’s front men from recovering or being able to sprint back and help the defence. In flicking the ball first-time Gagliardini also bypasses another Atalanta presser. 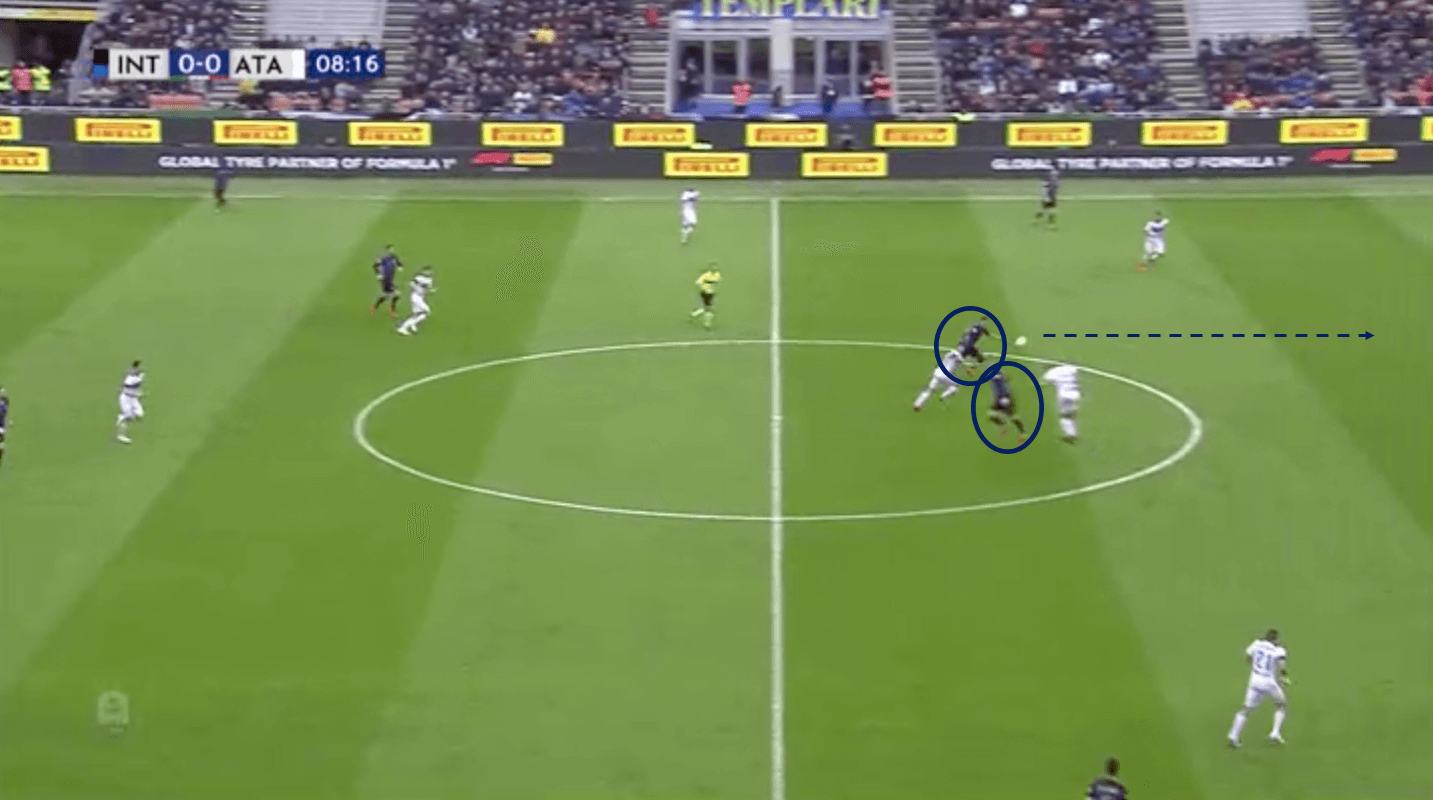 With numbers committed up the field, the Atalanta defenders try to defend aggressively when the ball is looped towards them. The central defender of the back three Djimsiti moves up with Icardi and tries to beat him in the air.

As the ball travels, Vecino makes a dart in behind the backline and into the space vacated by Djimsiti. Vecino collects and shoots from range. In three simple but measured passes, Inter had breached Atalanta’s defence just eight minutes into the game. 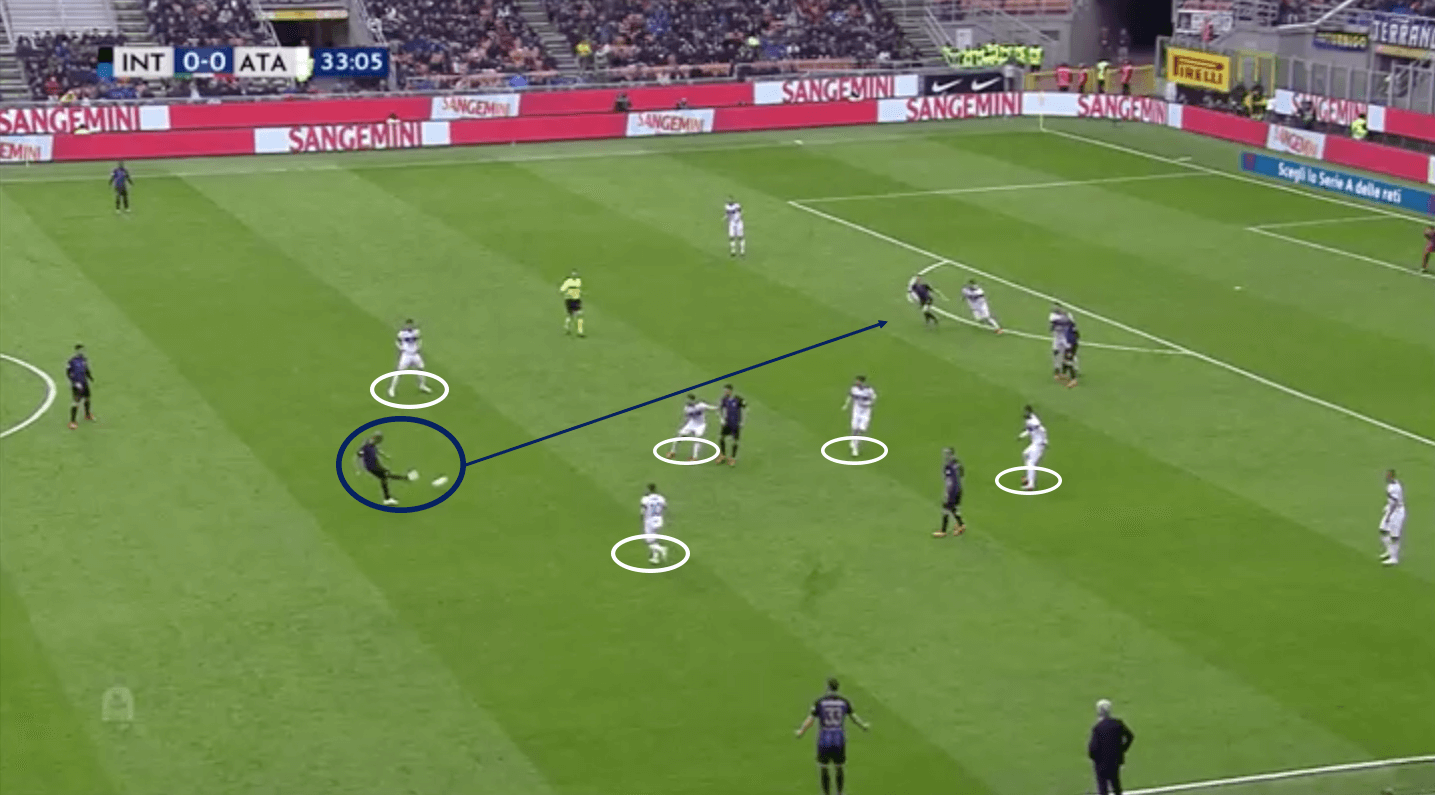 Encourage by this, Inter continued to look for direct passes into the feet of their attackers. Vecino and Icardi looked to work close to each other as they attempted to play quick one-two’s to exploit the aggressive nature of the Atalanta defenders. 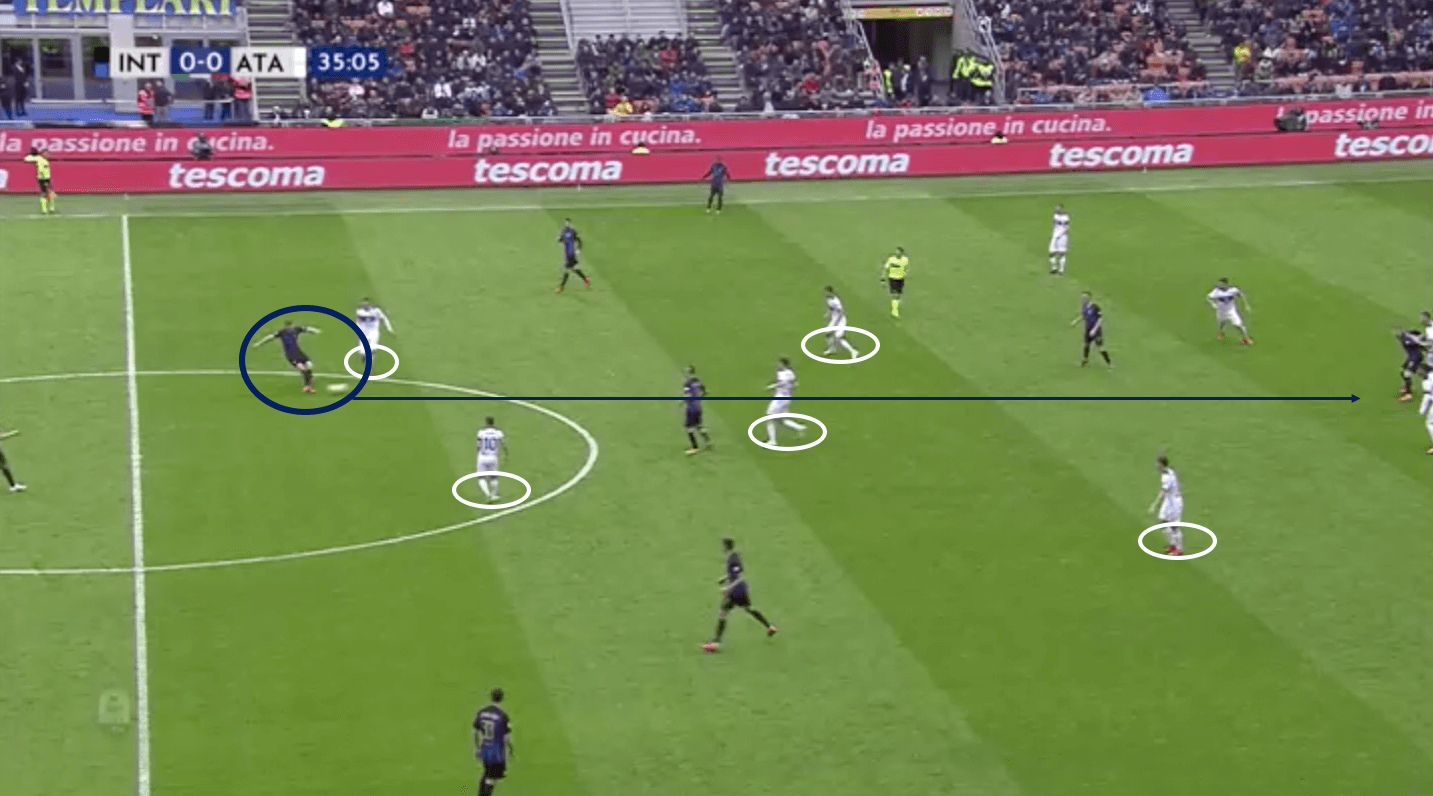 Inter routinely took four or five Atalanta players out of the game with this kind of pass but were just at times let down by the poor first touch of Icardi, Vecino or sometimes Perišić or good defending from behind by Djimsiti. 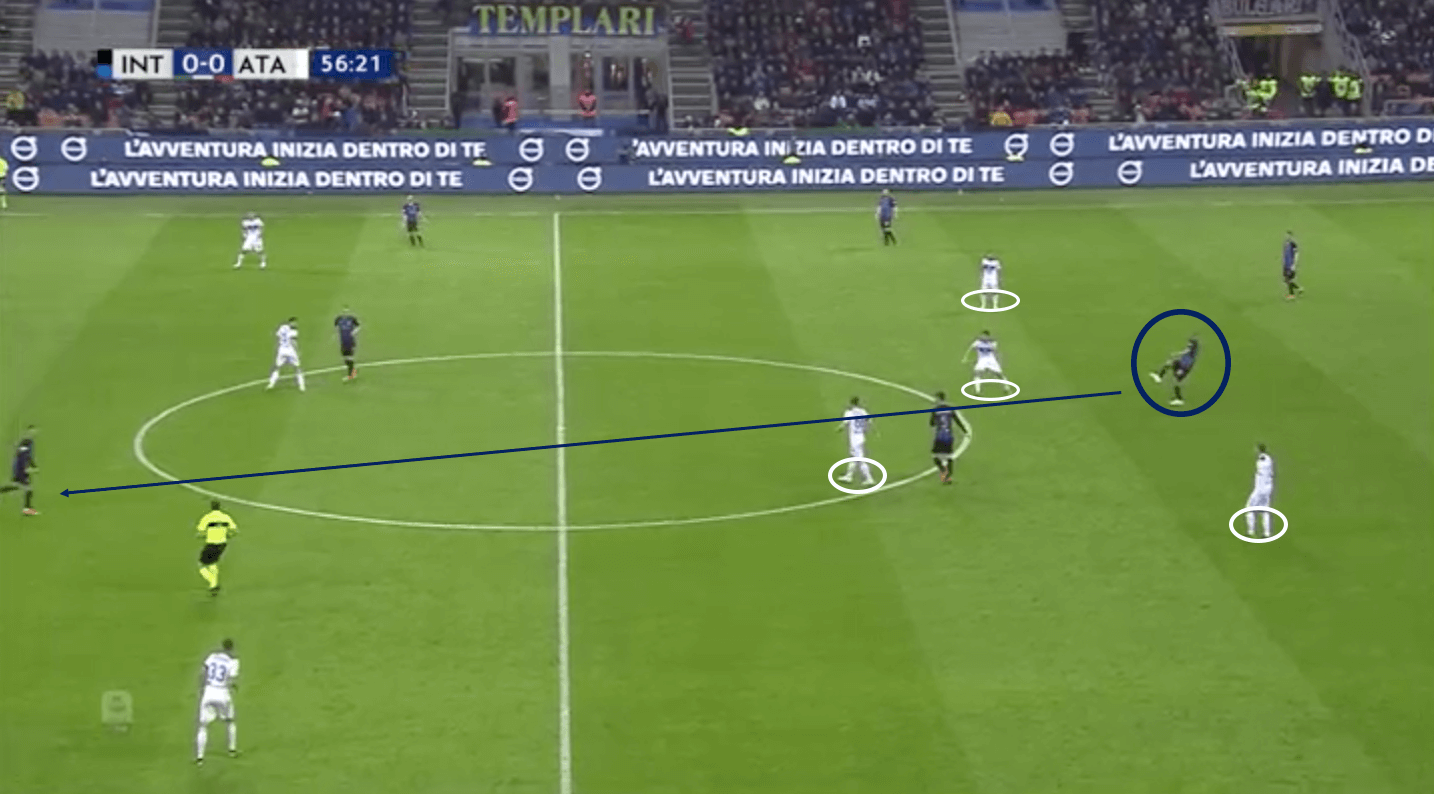 In the second half, Inter didn’t find as many of these passes at Atalanta tightened up slightly and were more successful in forcing Inter out wide. However at times they were able to work similar situations as in the first half shown above.

On the occasions that Atalanta successfully covered the centre of the pitch, Inter were forced to try and build play through their full-backs, in particular, Kwadwo Asamoah. 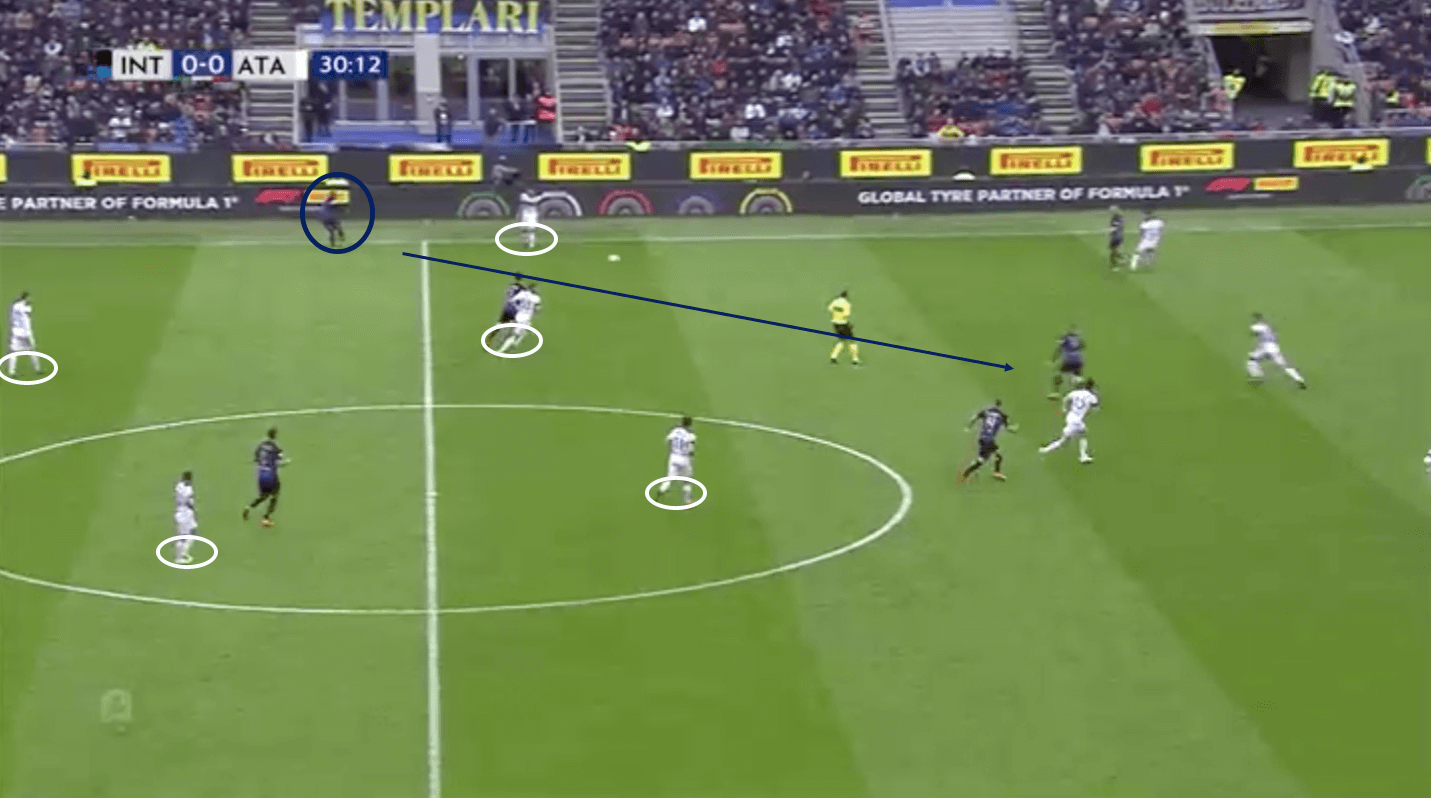 Inter seemed fairly comfortable with building the play from their left-back however. Asamoah is somewhat of a ‘jack of all trades’ and throughout his career has played all across the midfield as well as at full-back.

He is comfortable at playing passes like the one in the image above and this was a good alternative for Inter. By shifting the point of attack, Inter could try and penetrate Atalanta from wider positions which can be easier than playing through the middle, particularly against a disjointed press. 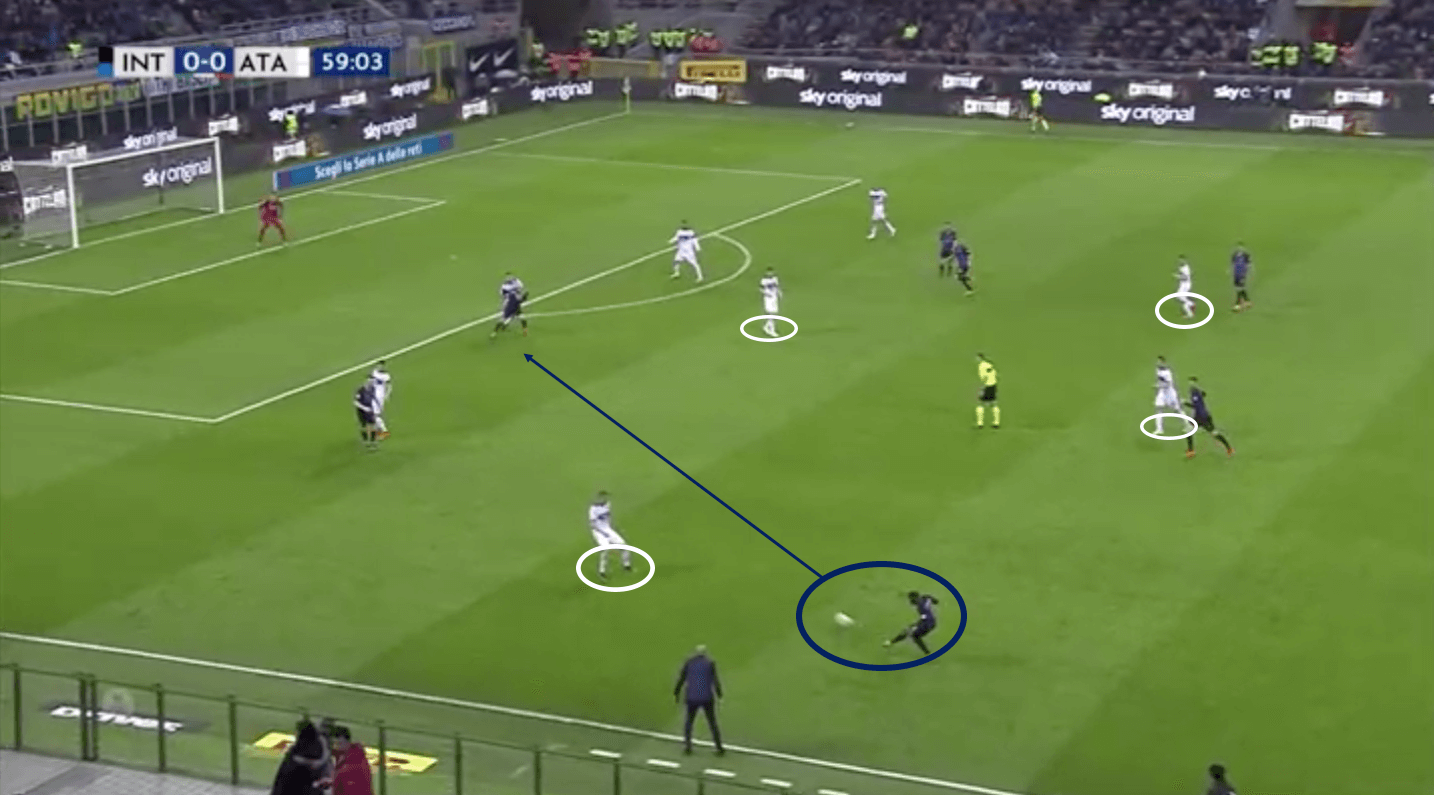 The wider passes from Asomoah were still successful at bypassing a number of Atalanta’s midfielders and forwards. He found Icardi with regularity in the first and second half but the Inter frontman struggled to escape the attention of Djimsiti.

If no clear passing option inside was on for Asamoah he would dribble down the left flank. With Atalanta reluctant to disrupt their midfield shape too much in defence, neither De Roon nor Freuler would often move out wide to confront him. Ivan Perišic had cleverly pinned back Atalanta’s right wing-back Hateboer giving Asamoah space to carry the ball.

In order to halt the attack on the left-hand-side, Gianluca Mancini would move out of the defensive line and engage Asamoah quite high up the pitch. This is something which is very natural to the wider centre-backs for Atalanta as they are often asked to operate in a man-marking style with midfielders tracking opposition runners, forcing the centre-backs into confronting the ball carrier. 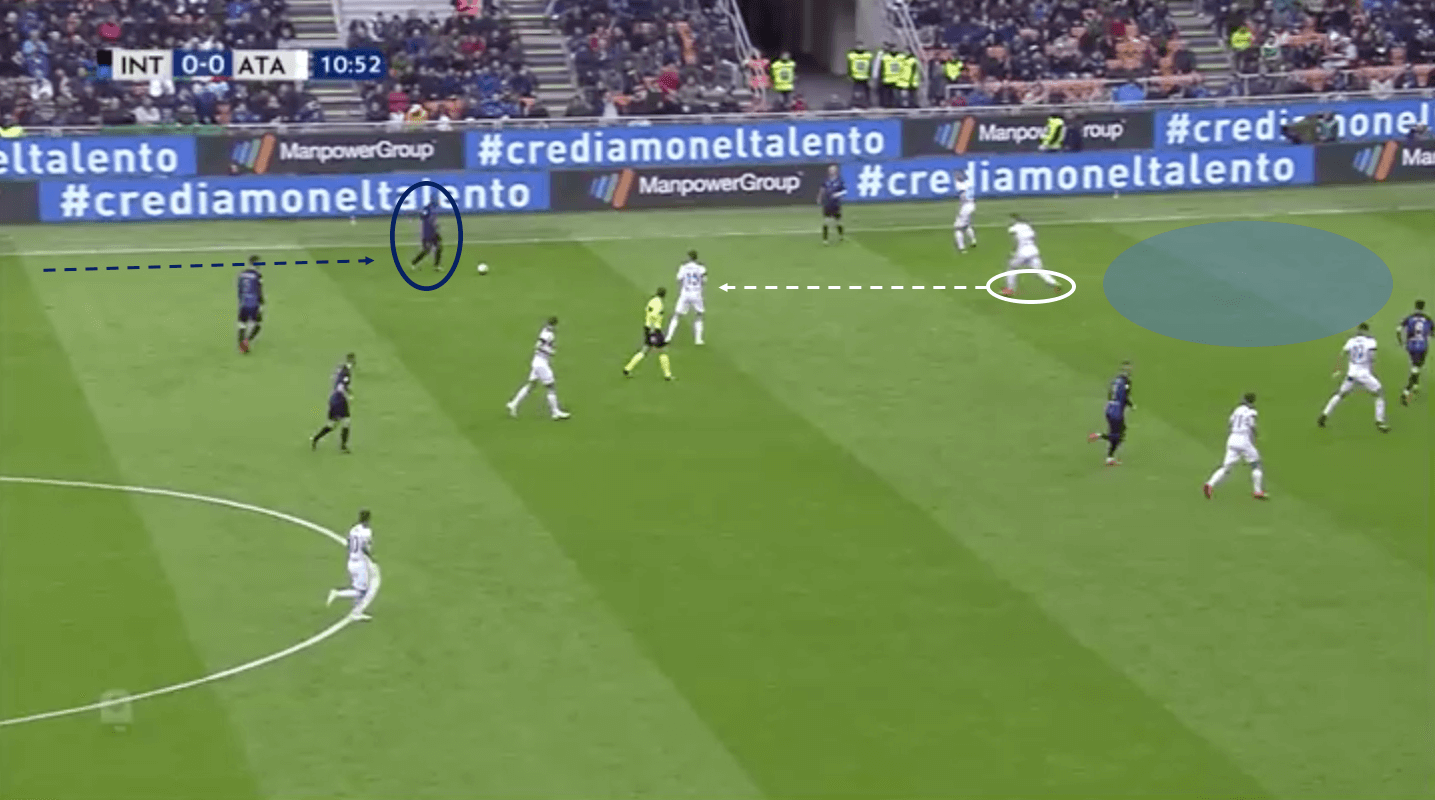 Whilst this is and has been an effective tactic for Atalanta this season, it seems as though Inter didn’t make the right choices to exploit it. With a wide centre-back in a back three/five pushing up out of the line, there is an inherent risk.

If the wing-back is forced to stay wide and the middle centre-back held centrally there is a big space to be exploited by a midfield runner or winger attacking the space behind his full-back from out to in a Leroy Sané-esque manner. 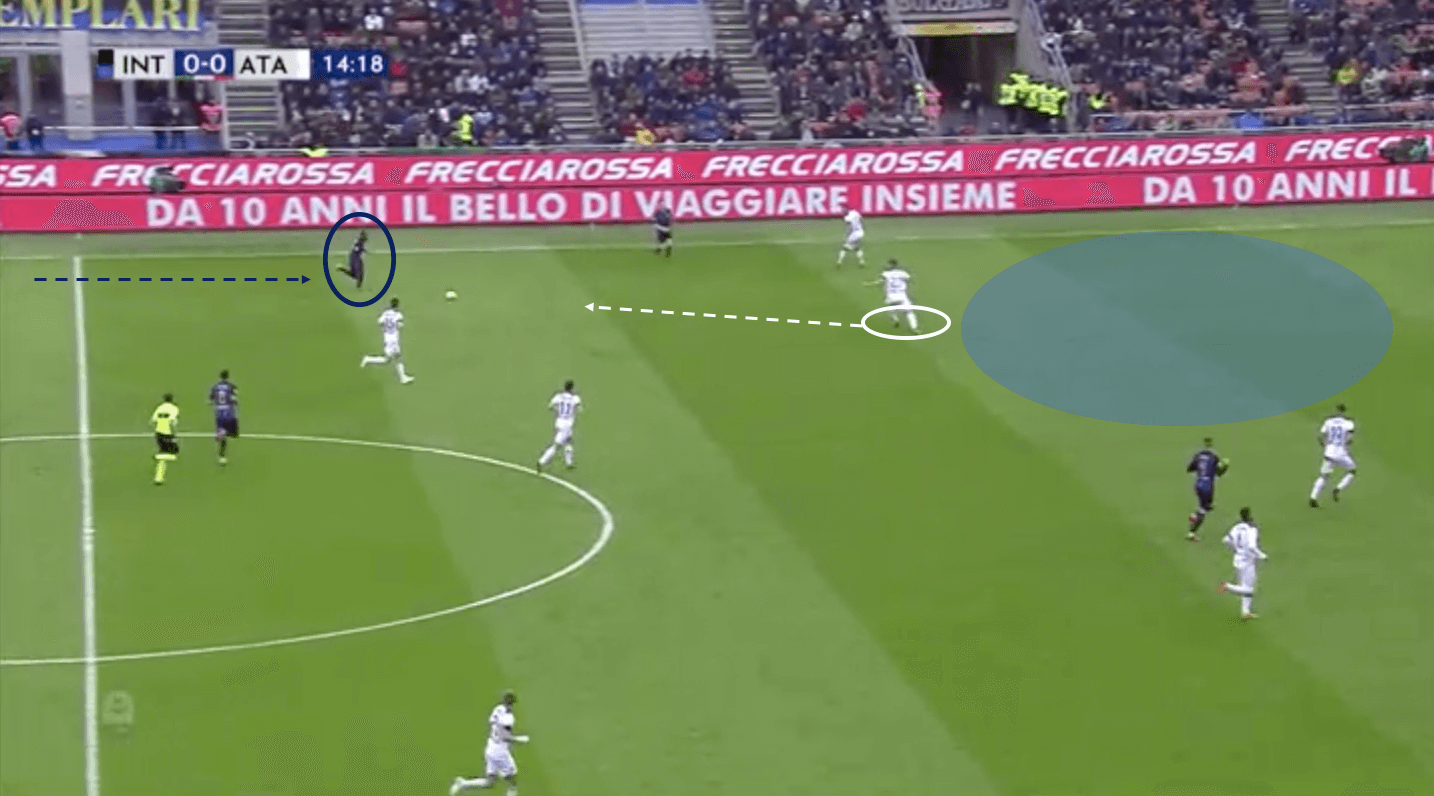 On numerous occasions in this encounter, Mancini would aggressively move to press Asamoah. Icardi is a penalty-box striker and prefers to operate within the width of the posts and as such he would hold Djimsiti in position. This left large holes in the Atalanta defensive line which were not often enough exploited. 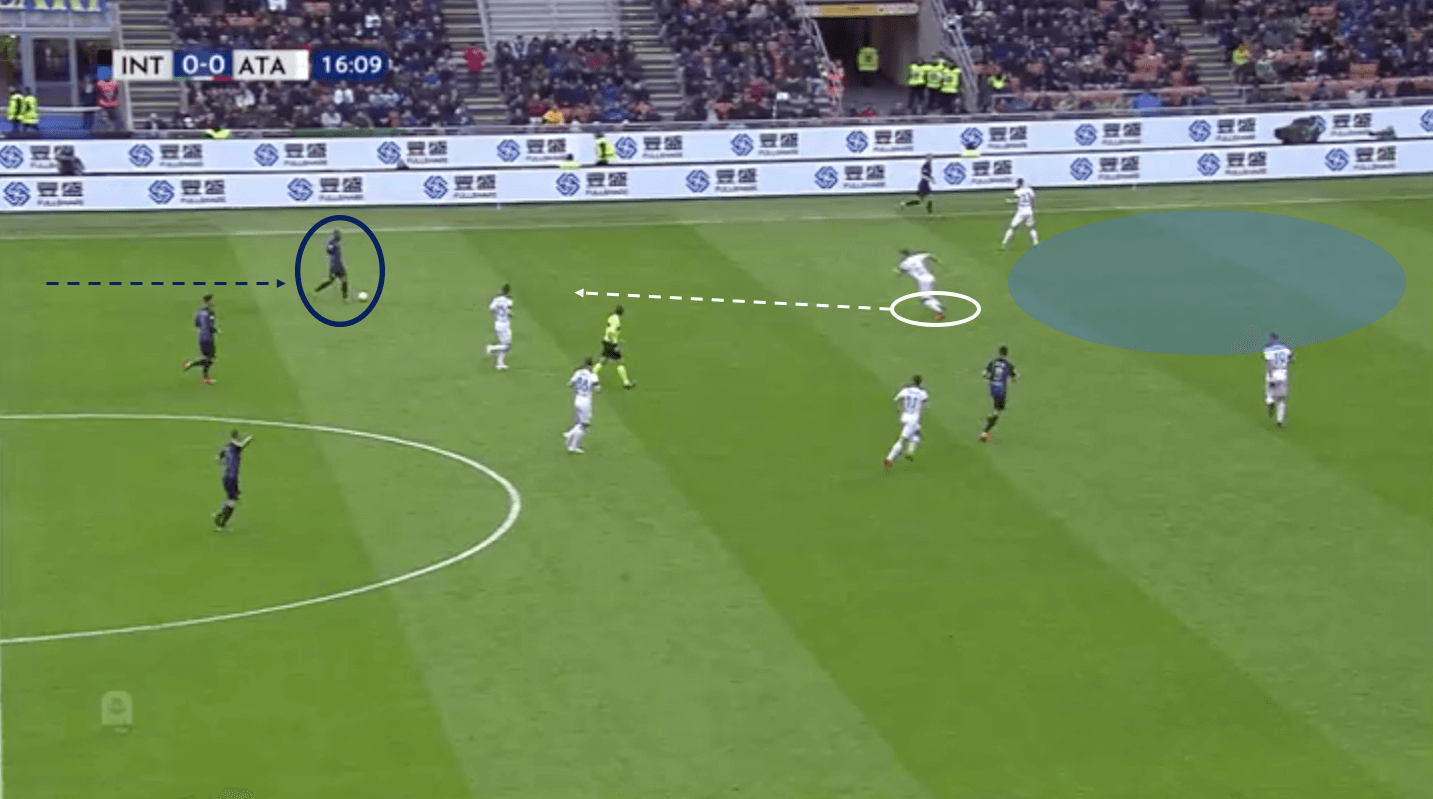 The one time that Inter were able to exploit the space is when Mancini engaged earlier and that gave Perišic space to come short and then dip in behind Hateboer. The resulting cross was blocked but it was a threatening position for Inter. 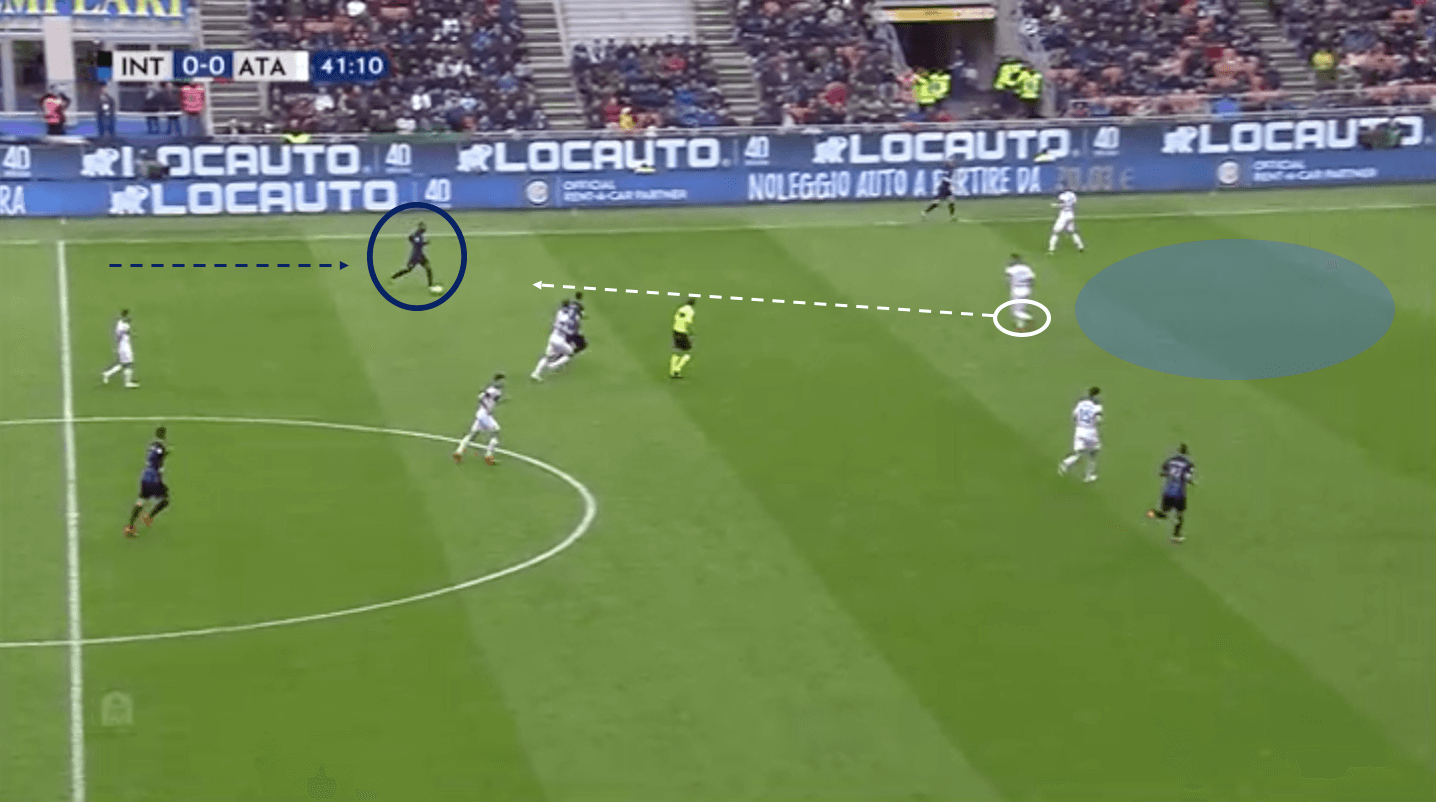 Atalanta had an attacking plan of their own. Whilst Asamoah is competent as a ball progressor for Inter, he could perhaps be considered as their defensive weak-link. In addition to this, Ivan Perišic didn’t seem all that concerned with helping his full-back defend in this game. With the more industrious combination of Politano and D’Ambrosio defending down Atalanta’s left flank, La Dea focused their play down the right flank.

Josip Iličić is a hugely underrated player across Europe, but in this Atalanta side, he is an important cog. His ability to ghost into the right half-space around the opposition penalty area is only really matched by Alejandro Gómez in this team. The combination of Iličić occupying the right half-space and Hans Hateboer overlapping down the touchline was Atalanta’s biggest attack threat throughout the game. 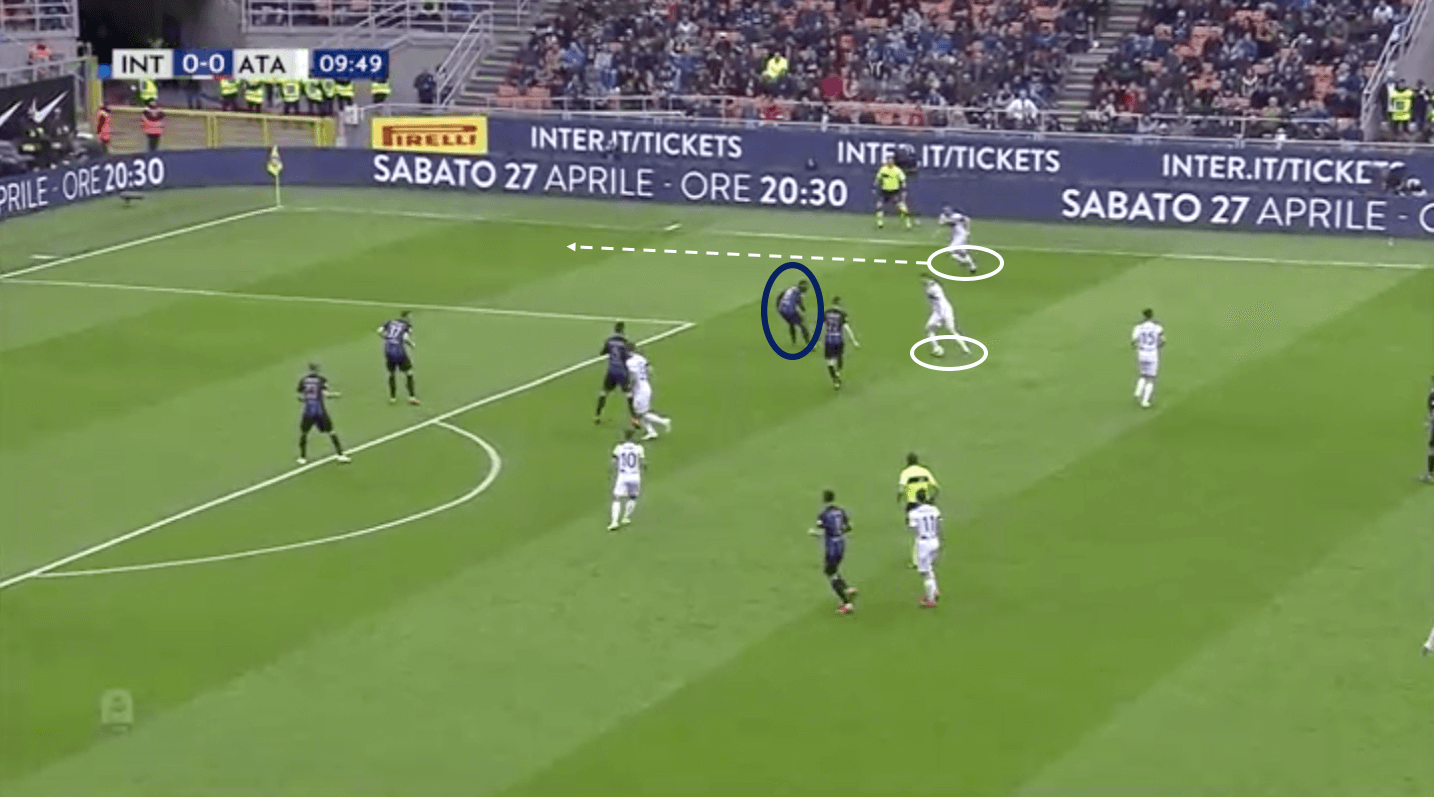 With this combination play, Atalanta were looking to isolate Asamoah and force him into making a decision. The decision would be to close Iličić or track the run of Hateboer. As we can see in the image above, Perisić isn’t in the image despite his opposite man Hateboer being just 12 yards from the Inter byline.

When Atalanta shifted the ball quickly they caught Asamoah in no man’s land. He tended to be either too tight on Iličić or too concerned by Hateboer. 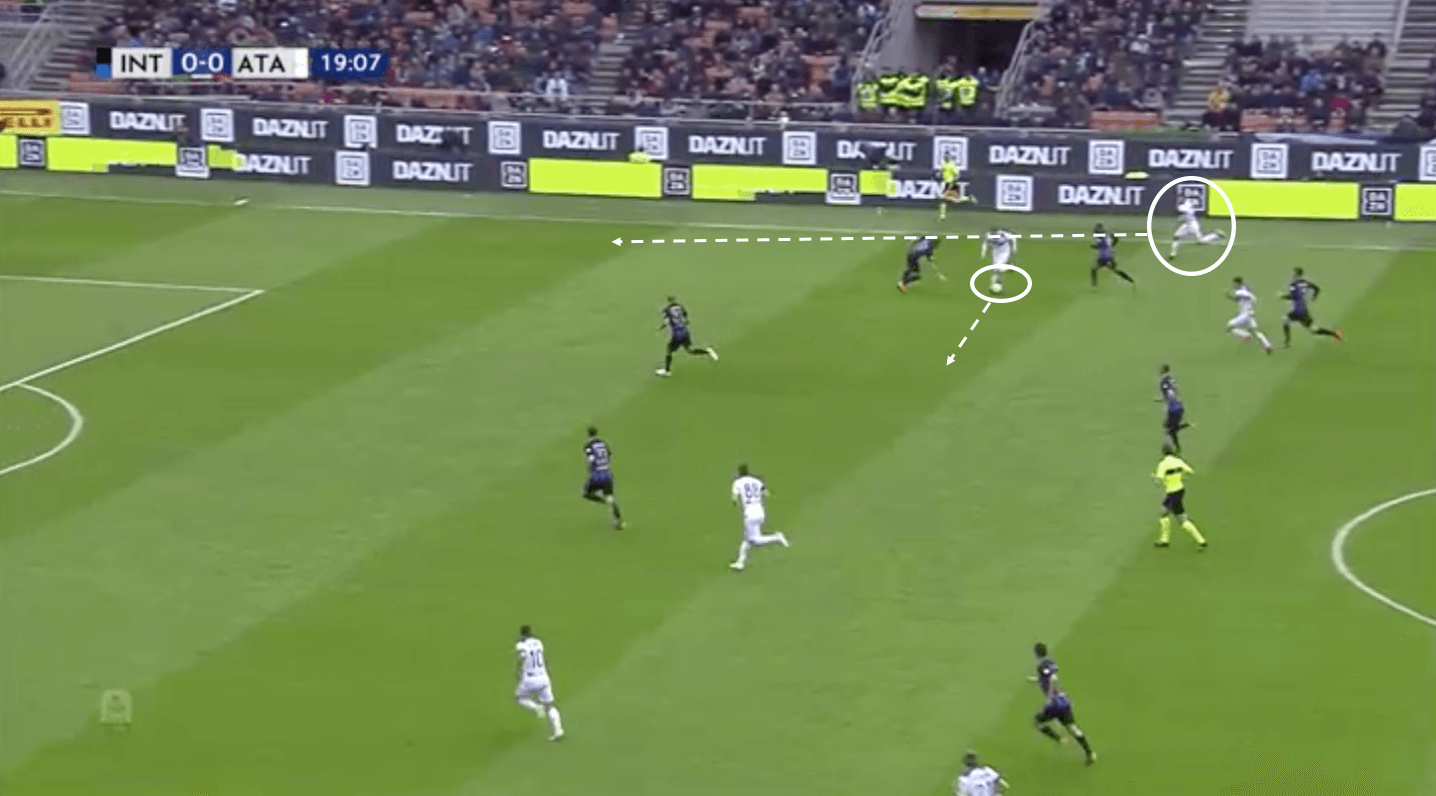 Hateboer’s runs caused the left-hand side of Inter problems throughout the first half but that threat faded away in the second as Atalanta became slightly more reserved. 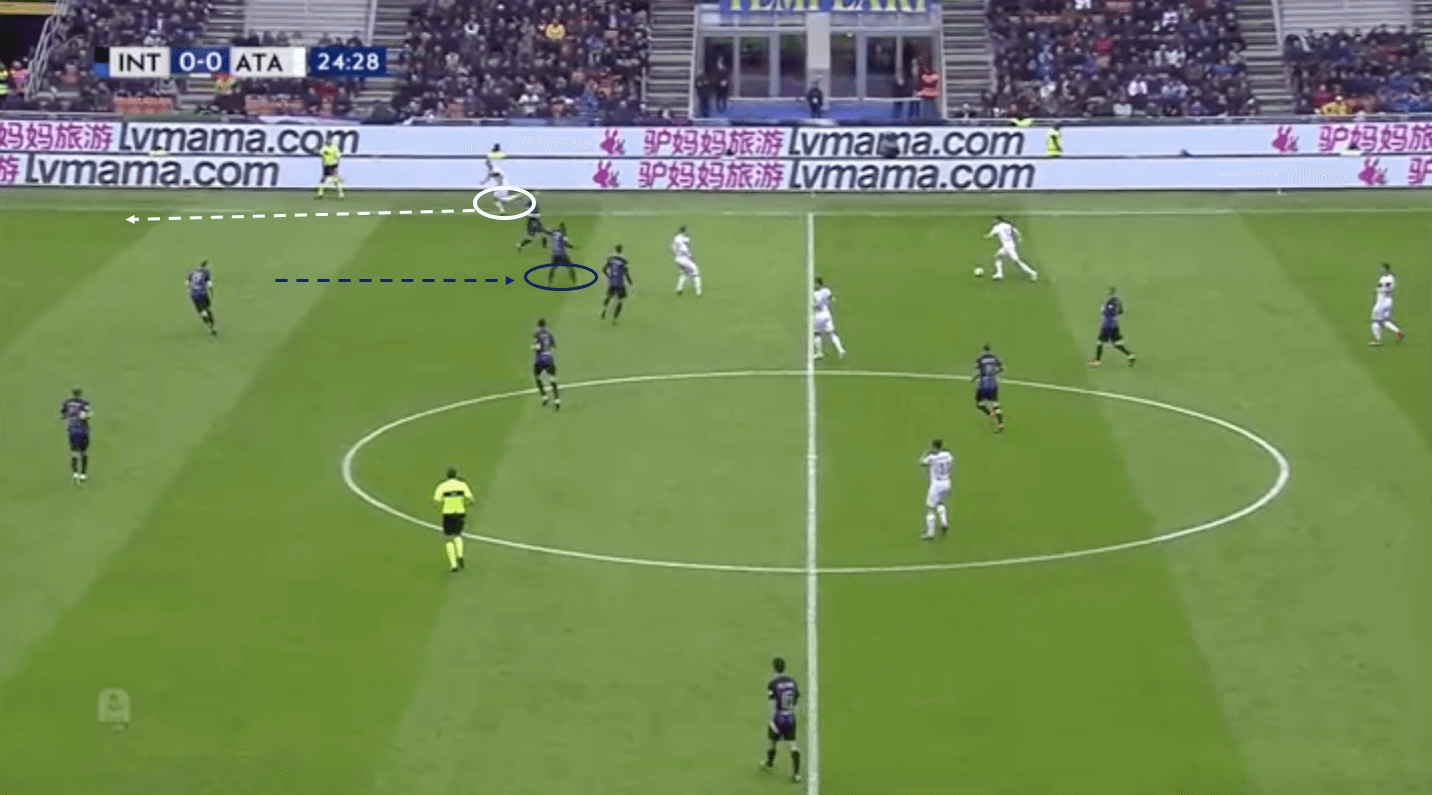 You do get the feeling had Zapata not been suspended for this game he would have been the man to profit from the dangerous positions Hateboer picked up throughout the first half. With Gómez operating in his place, Atalanta lost a bit of penalty box presence that did cost them at times. 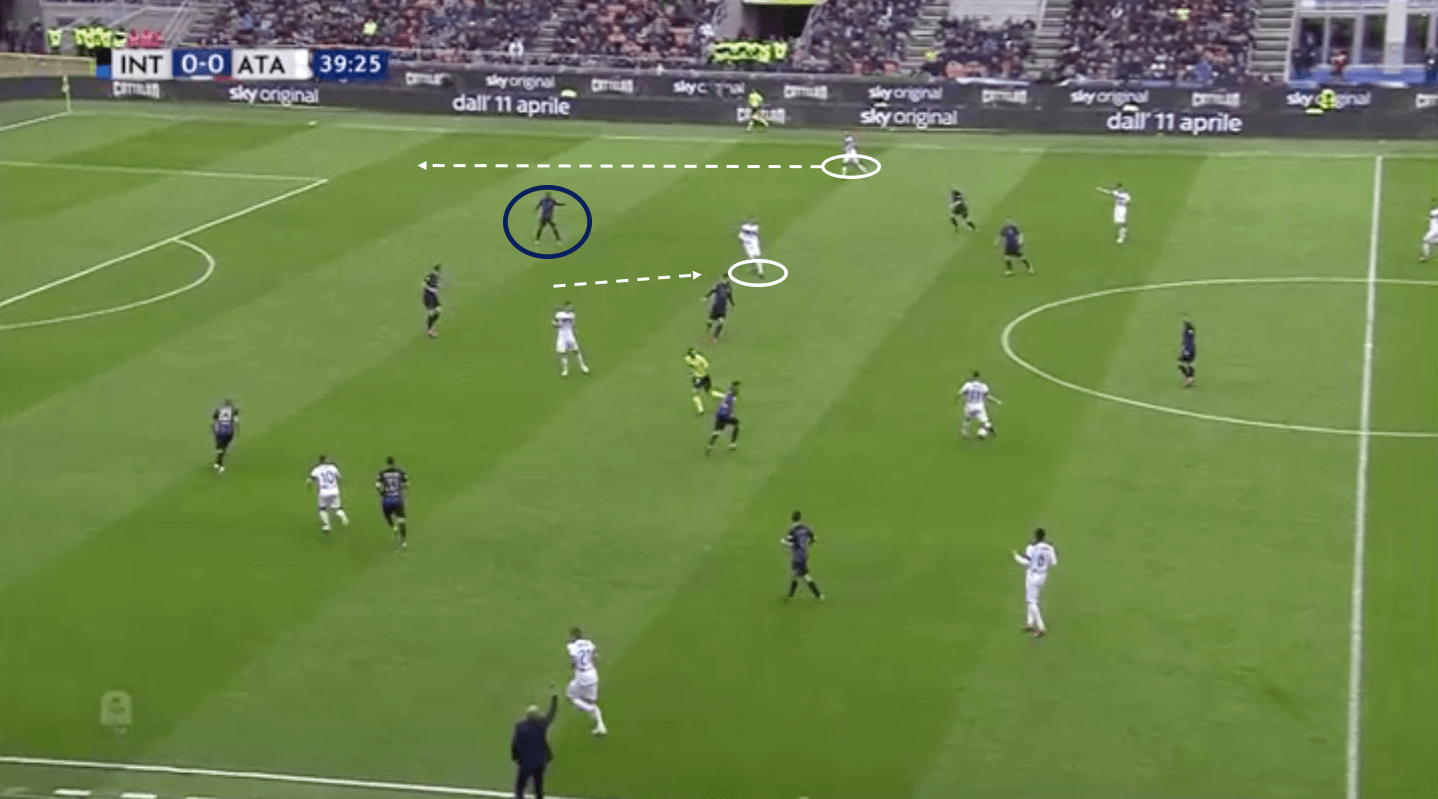 Whilst both teams would have gone into Sunday’s game hopeful of walking away with all three points, neither manager can be too disappointed with a point. The result left Atalanta on 52 points in fifth, behind Milan on head-to-head. With their city rivals dropping points, Inter moved a point further away from the battle for fourth and into the driving seat for Champions League qualification.

If Atalanta are to miss out on Champions League football it would be a huge shame but they shouldn’t look back on this season as a failure. They’re battling with the traditionally huge names of Italian football and are doing so playing some of the best football in the country.