Could better switching have led Milan to their first win at the Allianz Stadium?

Juventus, who could possibly beat their own record of 102 points in a season are on course to win their record eighth straight Serie A title, faced a tough challenge at home to AC Milan. However, Gennaro Gattuso was trying to lead Milan to be the first team this season to win at the Allianz Stadium.

On top of this, he is aiming to secure a fourth-place finish and a place in next year’s Champions League for the first time since 2014. In this tactical analysis, we will look to see if Juventus are on track to create history and if Milan can make ground in the race for Europe. 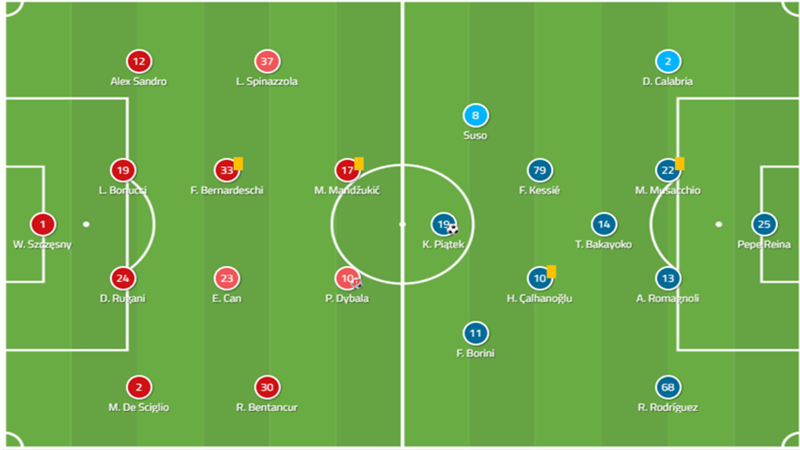 Juventus set up in a 4-4-2, but there was no Cristiano Ronaldo who picked up a muscle injury during the international break. In his absence, Mario Mandžukić and Paulo Dybala led the line for Juventus. Former Liverpool midfielder Emre Can played alongside Federico Bernardeschi, while fellow former Reds Suso and Fabio Borini played on the wings of a 4-3-3 for Milan. Franck Kessié, Hakan Çalhanoğlu and Tiémoué Bakayoko made up the Milan midfield.

On the team sheet, Juventus played in a 4-4-2 but at times they changed to a 5-3-2, with Bernardeschi, Can and Rodrigo Bentancur as the midfield three. This allowed Juventus to slide across to become more compact when Milan had possession. When Milan moved the ball to the other side, Juventus would simply shuffle across to that side. This is why Milan only had 1.15 expected goals as they could not break down Juventus.

But one way they could have broken down the Italian champions would have been by quickly switching the play, or more specifically more quickly than Juventus could shuffle. However, Bakayoko often let Milan down with his poor body positioning. The below example is just one of the times in which Bakayoko misses the chance to switch but he sets the ball back towards Kessié.

However, if Bakayoko had opened up his body, he could have seen the switch to Suso on the opposite side of the pitch. This could have caused trouble to Juventus as Milan would have found themselves out of the compact left-hand side of the pitch and into Suso who was in more space.

If you look at Bakayoko’s pass map of the game, he does switch the ball on a few occasions, but he made a lot of short and backward passes like the example above. If Bakayoko had used better scanning skills he could have unlocked the Juventus defence by outmaneuvering their compact midfield unit and created more chances for Milan.

However, there was one problem in the Juventus shape which allowed Milan to have a chance of scoring. This was the distance between the defensive lines. The below image is just one example in which Juventus left space in between the midfield and defence. This allowed Milan striker Krzysztof Piątek space in the attacking third.

This benefited the Milan counter-attack very well as they had space in order to play forward. In the second half, a similar opportunity arrived when Piątek took the ball around Wojciech Szczęsny but missed from a narrow angle.

There was too much space between the two defenders sitting back and the Juventus players who had gone up for the corner. One of the two Juventus defenders should have stood in front of Piątek to close this space. This would have made it harder for him to receive the ball.

What did Bakyoko do well?

After a fantastic season at Monaco, the development of the Frenchman stalled at Chelsea. But in his loan spell at Milan, he has shown the defensive qualities that have made Milan want to make his deal permanent.

The below move starts from poor play by Sami Khedira, who takes a poor first touch which takes him backwards. This initiates the Milan press. Khedira should have looked to his right and switched the play out of danger, but he is slow and plays the ball back to Bonucci.

Bonucci then tries to play the ball to Bentancur but it was read superbly by Bakayoko who wins the ball and plays it into Piątek. When the Polish striker receives the ball he pushes it on to his right foot and slots the ball into the bottom right corner for his 21st goal this season.

So how did Juventus respond?

At times throughout the game, Juventus would look to create overloads in the wide spaces so that they could drag out the Milan players. By doing this they could either cut inside or play the ball centrally. This allowed Juventus to target players inside the penalty areas in space.

You can see below the impact this had to the Milan back four. Leonardo Spinazzola and Mandžukić drag the two Milan defenders outside, creating the gap in the middle of the back four into which a Juventus player can run and create a chance.

This is the main reason why Juventus had 2.65 expected goals. If you look at the below image, Juventus’ shots on goal mostly came from inside the penalty area. These came from balls which came in from wide or deep to Juventus players in space in the penalty area.

Juventus got the equaliser from this pattern. The width that Juventus had created allowed Bonucci to play the ball into Dybala. In the below image we see Spinazzola out wide and which means young Milan right-back Davide Calabria must move wider, so he can press if the ball finds Spinazzola.

The result is that Dybala can find a gap in between Calabria and Mateo Musacchio. This then leads to Musacchio bringing down Dybala in the penalty area, leading to a penalty which Dybala converted to equalise for the Old Lady.

The impact of Moise Kean

In the 66th minute, Juventus took off Dybala for Moise Kean who was perfectly suited to fill the gaps that Milan had created. When he came on he created three chances with an xG of 0.91, including his goal. Two of these chances came from moving to the side of the compact Milan defence to receive the ball on his back foot before shooting. One effort was blocked by Ricardo Rodríguez, but the other was the winner for Juventus.

You can see in the above image that Milan are too compact, and Rodríguez has the wrong body position. He should be alert to the presence of Kean but looks too much at the ball. This allows Kean space and time to make a run on the outside of the Swiss full-back so that he can control the ball with his back foot. By the time Kean receives the ball, Rodríguez cannot adjust his body position in time, allowing Kean the space to finish his strike in the bottom corner to win the match for Juventus.

With Napoli only managing a 1-1 draw with Genoa, Juventus now only need two points to claim their eighth consecutive scudetto. This can be done with a win away at SPAL on Saturday. However, before they can do that, they have a very tough midweek task in Amsterdam as they face the exciting young Ajax side in the first leg of the Champions League quarter-finals.

Meanwhile, Milan drop down into fifth behind Atalanta on goal difference. They are also one point above Roma in sixth and three points ahead of seventh-place Lazio, who they play next Saturday as the battle for Europe intensifies.