Lazio and Milan nullify each other in Coppa Italia semi-final

Milan have enjoyed a great run of form since adding Lucas Paqueta and Krzysztof Piatek in the January transfer window. For example, Piatek has scored seven goals in his first six games. On Tuesday night Milan clashed with Lazio in the first leg of the Coppa Italia semi-final. This tactical analysis will look at why the game ended in a goalless draw. 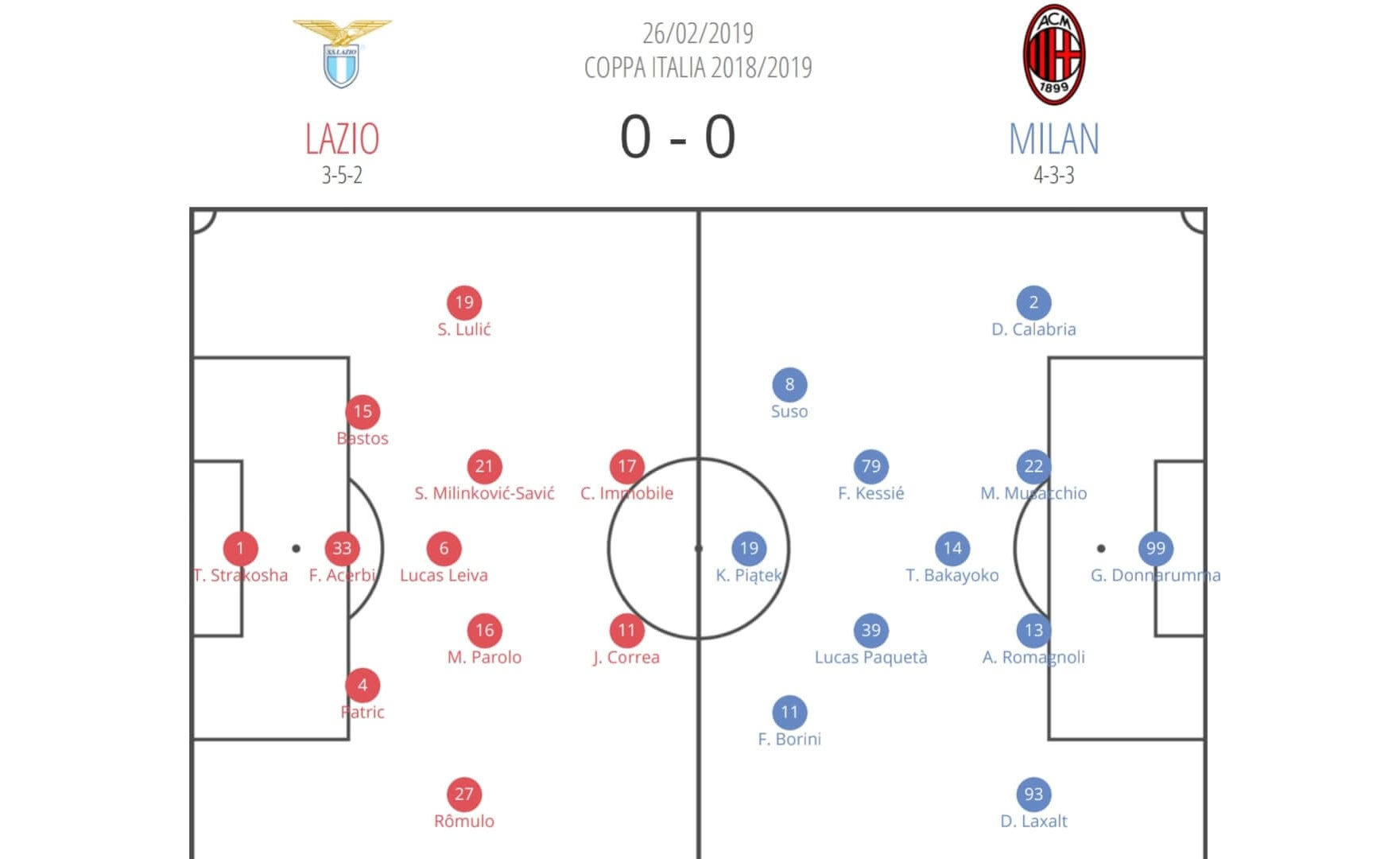 Simone Inzaghi had to change quite a bit from his normal XI. Patric and Bastos were both played in unfamiliar positions in the three-man defence while Romulo started in place of the normal right wing-back Adam Marusic. Joaquin Correa was preferred to Luis Alberto as Ciro Immobile’s understudy up front.

Gennaro Gattuso has found what seems to be his preferred XI in recent weeks but this game saw Diego Laxalt and Fabio Borini start on the left flank rather than Ricardo Rodriguez and Hakan Calhanoglu.

Despite missing key defensive players like Stefan Radu and Adam Marusic, the performance from Lazio highlighted just why Inzaghi is so highly rated in Italy. By moving Bastos to the left of the three-man defence and deploying Patric, who normally plays at wing-back, on the right, Inzaghi had two players at the heart of defence who weren’t used to their positions. Still, Lazio looked really solid defensively.

Inzaghi kept his usual 3-5-2 but he did make some tweaks. First of all we can note the positions below. Secondly, we can see that Correa often dropped off the front to mark Bakayoko. This was something Inzaghi wanted for two reasons. Firstly, to stop the Frenchman dictating play. Secondly, to force turnovers and attack Milan with counter-attacks.

Both of these targets would be successfully met throughout the game. Despite Bakayoko occasionally doing really well, he was often blocked off and Lazio should have scored from one of the counter-attacks when they robbed him of possession. 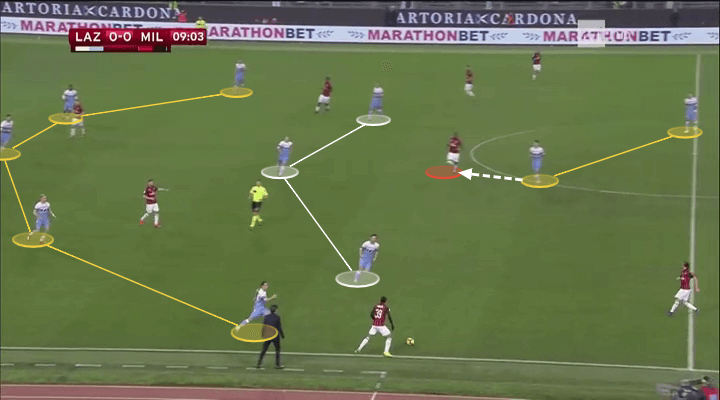 Lazio’s defending was largely man-orientated as seen below. As always, Inzaghi had his outer central midfielders step out to press Milan’s full-backs. Below we can see how Parolo does this. This movement allows for the wing-back to play really tight to the wide player while the near-side centre-back, Patric in this case, can step up to the central midfielder. In this case, Paqueta and Borini had swapped positions but the principles remain the same for Lazio. 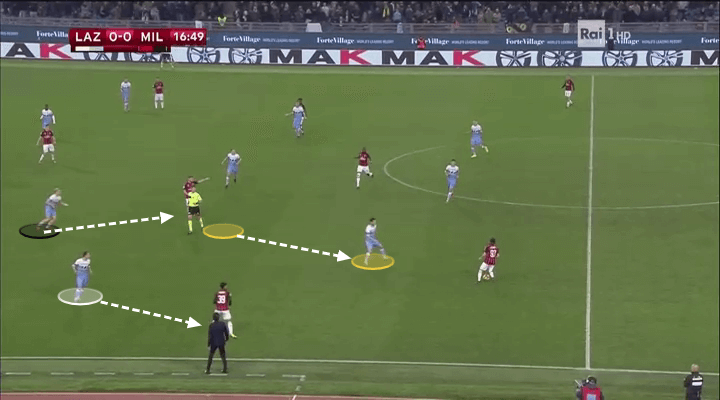 The image below shows another example of this approach. Parolo steps out to press Laxalt while Romulo marks the wide player. I’ve also highlighted Immobile dropping in to mark Bakayoko as Correa goes to press Milan’s left-sided centre-back Romagnoli. 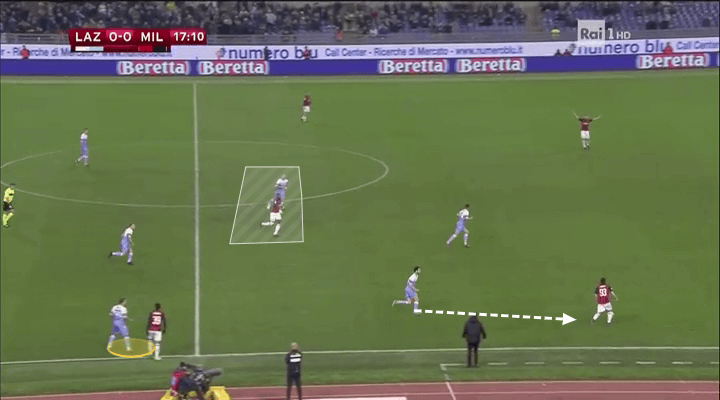 Lazio’s defending was solid throughout and Inzaghi was rewarded with a clean sheet. His tactical understanding was evident once again as his makeshift defence kept Piatek quiet. This was due to his collective defensive approach which Milan rarely broke through.

As mentioned, Milan rarely managed to thoroughly break through Lazio’s defence but they didn’t lack ideas. The below image shows how they often rotated positions in order to escape Lazio’s man-orientations. In this case, Kessie (yellow) has dropped deep while Calabria (white) moves up the wing and Suso (purple) comes inside. 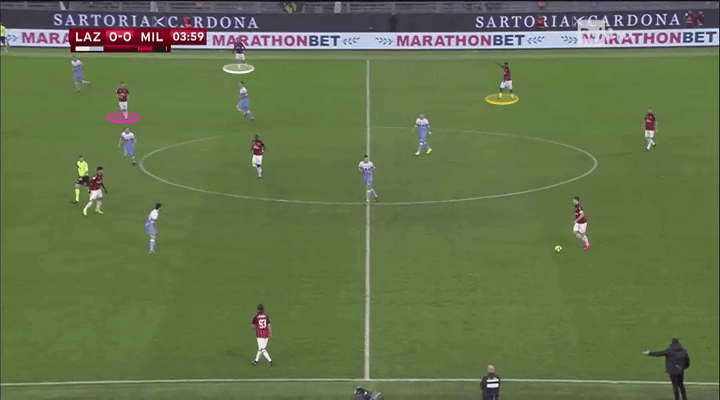 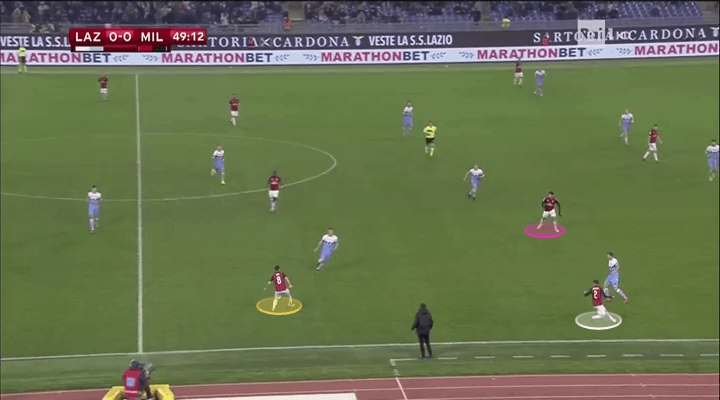 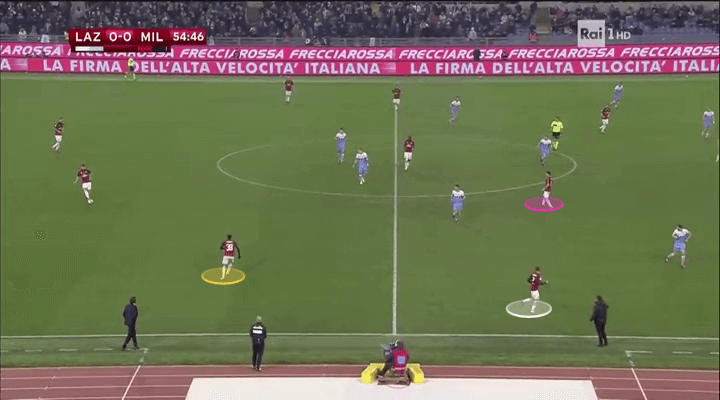 These rotations were often the key behind Milan beating Lazio’s organized midfield. Below, Paqueta has moved across the pitch to find space behind Lazio’s midfield line. He receives the ball and can attack the space between the lines. 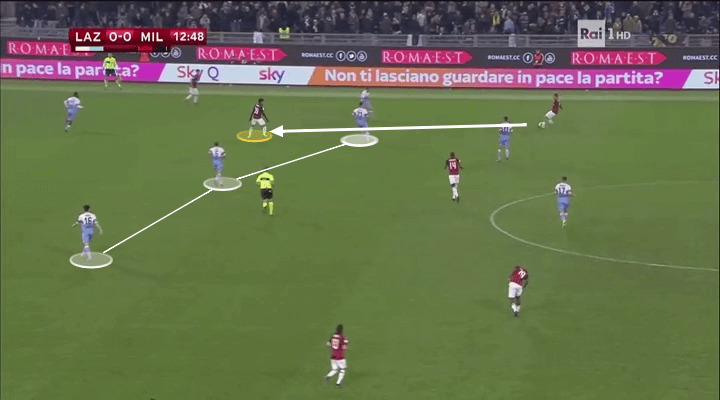 Whenever Milan did break through the midfield line it was often due to Paqueta’s positioning. Here we see him finding space behind the midfield line again. This is also a good example of how Milan managed to manipulate Lazio’s man-orientated defending.

As Paqueta is about to receive the ball the centre-back Bastos can’t press him due to Piatek’s run. The wing-back Lulic can’t either since he is focusing on Suso. Paqueta can therefore receive and play Piatek in behind. The Pole’s strike was deflected, though. 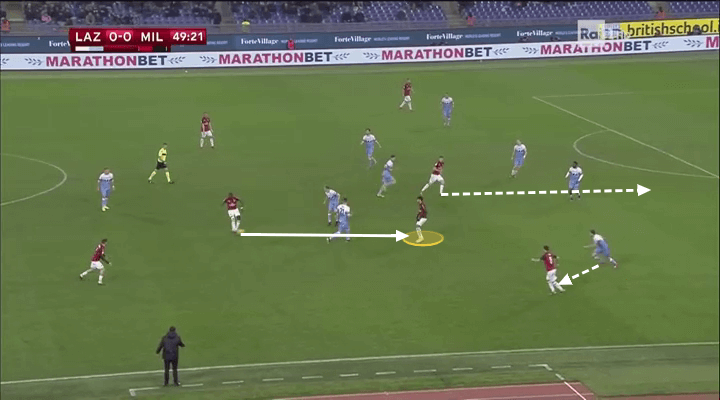 Milan also impressed with their defensive approach by earning a clean sheet in Rome. They defended with a very compact team but differed from Lazio since they were positionally-orientated. We can see their defensive shape in the image below. It’s a very compact shape that focused on closing the distances between their midfield and defence. 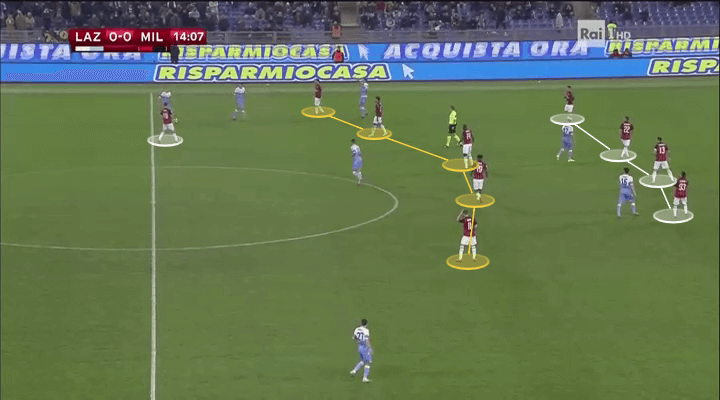 I created this image just to highlight how compact Milan often were when defending. There was often absolutely no space for Lazio to play between the lines. On the few occasions they did, this was largely due to individual actions from the likes of Milinkovic-Savic which is almost impossible to defend against anyway. 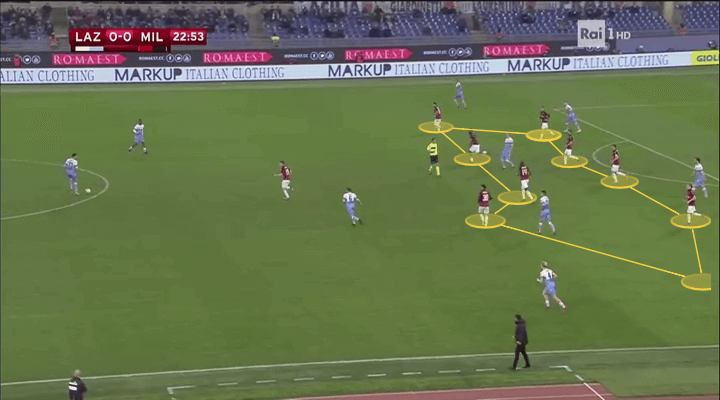 There was good reason for Milan to defend in this way. Lazio often look to find players between the lines of the opposition and then use rapid combination play to create chances. We can see their hope of doing this by looking closer at their setup in possession.

They push both wing-backs high down the wings while keeping the front two (yellow) close to each other. The two outer central midfielders move up to the forward line before dropping off to receive behind the opponent’s midfield. Milan prevented this with their compact defending. 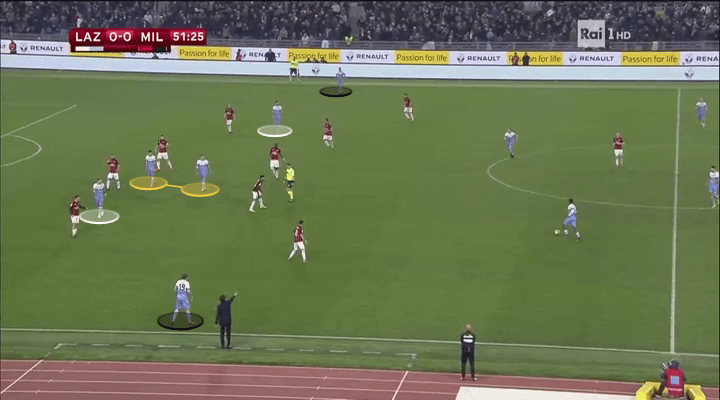 This meant Lazio had to attack other areas. They had clearly identified one weakness of Milan’s defensive structure and they looked to exploit this area repeatedly. The area was the space between centre-back and full-back as highlighted below.

In the first image, Parolo makes a run into the space between Romagnoli and Laxalt. Romulo duly plays the ball in but nothing comes of Parolo’s cross. 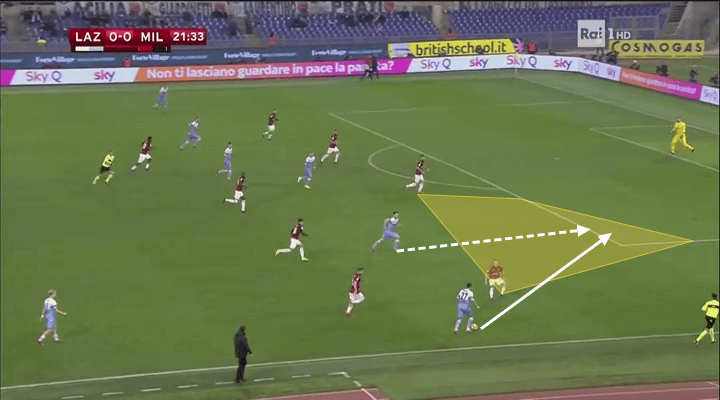 The second image sees Patric play the ball into the run of Romulo who targets the same space. Nothing came of this situation either, but it was clear that Lazio had talked about attacking this space. 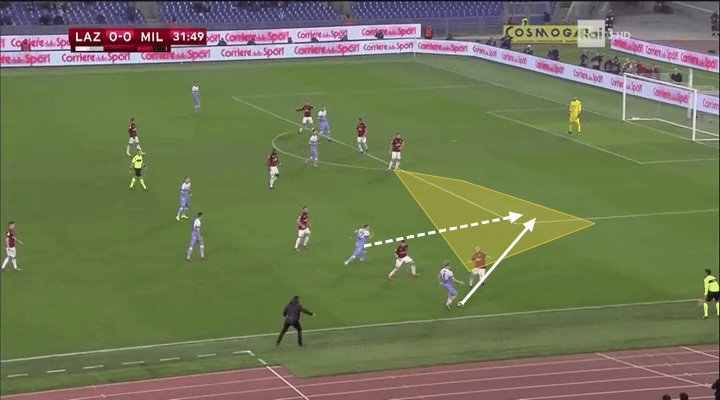 Milan’s compact defending forced Lazio to find other areas to attack. The same thing happened the other way around with Milan’s rotations looking to destabilise Lazio. Neither team managed to score from it, but it made for a great tactical match to watch.

The semi-final first leg provided no goals, but it did bring us an interesting tactical battle. Gattuso tried to overcome Lazio’s man-orientated defending with his rotations while Inzaghi tried to find a way through Milan’s compact defence by targeting the inside channels behind the full-back.

The result means it’s all to play for at San Siro in the return leg. It will be interesting to see what each coach changes, or doesn’t, ahead of the second leg of this Coppa Italia semi-final.