How Milan overcame an impressive Atalanta

Atalanta vs Milan is a relatively local derby with Bergamo, the home of Atalanta, sitting to the north-west of Milan. However, the two sides could not be more different in terms of their history of success or the methods with which they construct their squads.

Milan are one of the most decorated sides in European football with seven victories in the European Cup/Champions League. They have also won Serie A on 18 occasions. In contrast Atalanta who have not won a major honour since the 1962/63 season, when they won the Coppa Italia. Milan have a history of expensive recruitment, most recently signing Polish striker Krzysztof Piatek for a reported €35 million in the January transfer window. Atalanta on the other hand have a strong record of youth development and signing undervalued players.

These characteristics of the two sides provide a fascinating backdrop to this fixture but the narrative was broader than that. Atalanta have been one of the most consistent attacking teams in Europe this season under their exciting coach Gian Piero Gasperini and have impressed with their attacking intent.

Milan, though, have been inconsistent to say the least under their coach Gennaro Gattuso. Now, with the aforementioned Piatek leading the line there is a need for Milan to find their form in order to challenge for Champions League qualification at the least.

In the end, Milan ran out 3-1 winners on the back of two goals from Piatek. The tactical battle throughout the match was an intriguing one. Milan showed resilience and defensive structure that has perhaps been missing for the majority of the season. 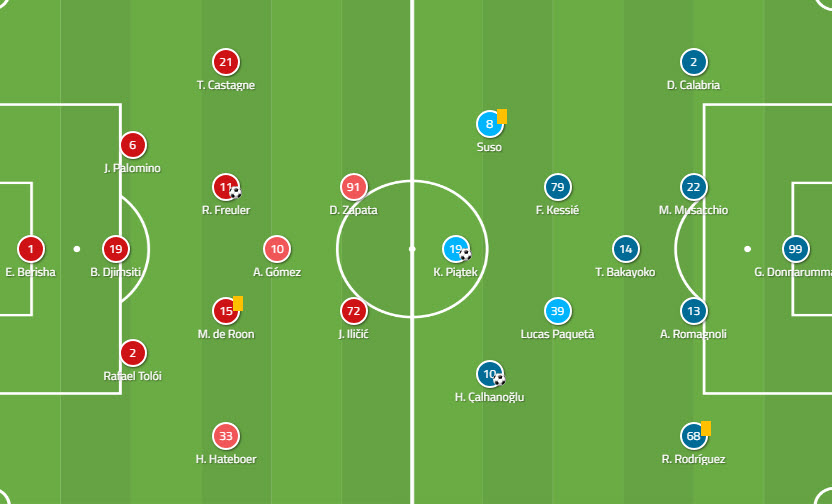 Atalanta lined up in their normal 3-4-1-2 system and were at full strength. Hans Hateboer and Timothy Castagne provided the width as the wing-backs, although the latter played on the ‘wrong side’ as he is right-footed but played on the left. Alejandro Gomez and Josip Illicic provided the creativity while on-loan Colombian forward Duvan Zapata led the line.

This season there have been few sides in Serie A that have been able to prevent Atalanta from launching effective attacks as they look to build up through the thirds of the field. Gasperini has developed an interesting tactical concept in that he is willing to allow one of his three central defenders to move up beyond the midfield line to allow for clean progression of the ball.

In this match, this tendency was noticeably missing, perhaps a result of Atalanta being concerned about Piatek and his attacking threat. As such we saw Atalanta consistently struggle to progress the ball cleanly. 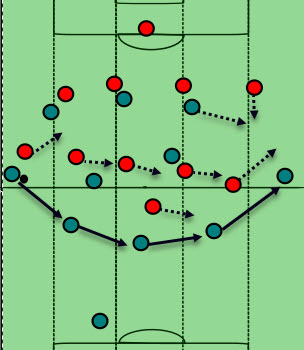 Without vertical movement from the central defenders, Atalanta ended up with a chain of five players across the defensive line. They circulated the ball across the width of the pitch from player to player, playing from left to right in the example above. With Milan defending off the ball in a 4-5-1 shape there were limited vertical passing lanes for the Atalanta defenders as they circulated the ball.

This slow progression of the ball from one side to the other was comfortably defended by Milan as they had the time to shift their defensive structure from one side to the other without leaving gaps that could be exploited by the opposition. As the match wore on we saw Atalanta find methods to work around this poor ball progression, but not until later on in the game. 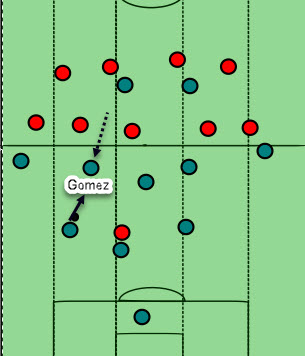 This change to the progression model came when club captain Alejandro Gomez began to take the initiative by dropping into deeper areas in order to receive the ball ahead of the Milan midfield line. This movement towards the ball saw Atalanta match up 5v5 with the Milan midfield. They were able to gain a qualitative advantage with Gomez’s possession and quality to move the ball beyond the midfield line into his more advanced teammates.

It is interesting to contrast the styles of ball progression with Milan being more direct in moving the ball forward. The Atalanta defensive structure became a 5-2-2-1 with the two wing-backs dropping straight back into the first line. There was then a gap that formed between the midfield two, Marten De Roon and Remo Freuler, and the two more advanced midfielders, Alejandro Gomez and Josip Ilicic, who dropped off the front line in the defensive phase. 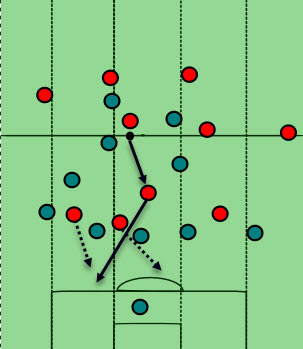 Milan, on the other hand, created a much more compact defensive block that was difficult for Atalanta to penetrate even when they moved in towards the final third of the field. 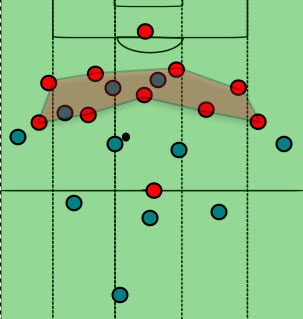 There was no space for Atalanta to occupy between the lines, as we would normally see from Alejandro Gomez and Josip Ilicic in particular. The two central midfielders for Milan, Kessie and Bakayoko worked hard at cutting off passing lanes in these areas.

In the end, Atalanta looked to access the wide areas where Hateboer and Castagne faced a disadvantage over the Milan full-backs and wide midfielders. This strategy was difficult, but Atalanta began to get more success when they were able to play in a more direct style in order to attack before the Milan defensive structure was set.

As the match progressed and became more stretched we saw clear attacking patterns start to emerge between the two sides. Atalanta tried to play a more direct style in order to access the central areas of the final third. This was a direct result of the numerical superiority that Milan enjoyed in the wide areas. 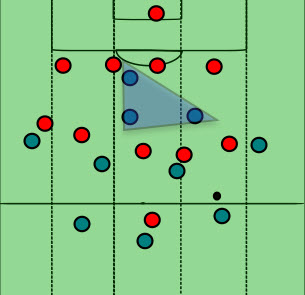 The attacking system for Atalanta was asymmetric, with Ilicic dropping off of the front line when Atalanta were progressing forward. He would occupy the half-space while Gomez was more likely to position himself in the central lane. As Atalanta looked to play quickly into the final third they hoped that they could access these spaces before Milan crashed back. The presence of Duvan Zapata was intended to keep the Milan defensive line from pressing out too high. 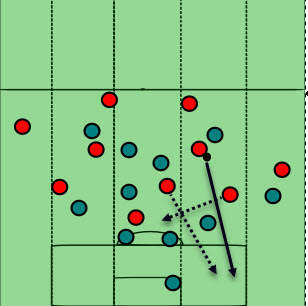 Milan were more nuanced in the attacking phase with the ball being progressed through the thirds in a more measured manner. The positioning and movement of Suso and Calhanoglu as they made central runs created space outside the wide Atalanta central defenders who would be pinned centrally. In particular, Paqueta continually looked to make runs into these channels in order to take advantage of slipped passes, as the diagram above shows.

In the end, a 3-1 victory for Milan was fully deserved, if only for the quality of Piatek’s finish for the equalising goal. The home side were applauded off by their fans at the end of the match, a measure of the appreciation they feel for their side so far this season.

In the end, though the three points headed back to Milan as the away side overtook their hosts in the league standings. This new look Milan, powered by the irrepressible Piatek, look as though they might be a force for the second half of the season.