One of the intriguing questions of the summer 2018 close season has been who would be the next Bayern Munich manager, after Jupp Heynckes’ departure.

A bumpy start to the season last year under Carlo Ancelotti led to the Italians’ departure from Bavaria, with steady hand Heynckes taking the reigns and leading the club to another Bundesliga crown. The 73-year-old, however, made it clear he would not remain at the Allianz beyond the summer.

This led to the question being posed, who next for FC Bayern?

Many predicted that Julian Nagelsmann would be next to take on the hot seat, although it took some by surprise when former Croatia captain, Niko Kovac was named the new boss. He turned Eintracht Frankfurt into European contenders, from being relegation candidates in the German top-flight. Clearly, enough for the Bayern hierarchy to be convinced of his ability to progress the German giants.

Kovac started to make his name as a manager when he took the senior role as Croatia boss, plunged into the deep end with his first two games after taking over from Igor Stimac, before a World Cup 2014 play-off games against Iceland. Croatia qualified 2-0 on aggregate. Kovac and his team managed to win one game and lost two at the tournament.

He then moved onto become Eintracht Frankfurt boss, leading them to an 11th place finish and DFB Pokal cup final runners-up in 2017. The Berlin-raised Kovac eventually won the Final against his new team Bayern, in the Olympiastadion in his home city back in May.

At Eintracht, Kovac preferred a three-man defence and a three-man midfield, varying depending on the fixture and opposition. His team would look to prevent the opposition from playing through the centre, using compact midfield numbers to show the opponents wide in a bid to press them and win the ball back.

He likes numerical superiority and a defensive stability in his block.

Whilst I don’t expect to see Bayern play with a back three and wing-backs, what his former team were exceptionally good at was having the wing backs drop into a flat back five out of possession. This then allowed an aggressive press from the near side wing back whenever the ball was moved into a wide area. 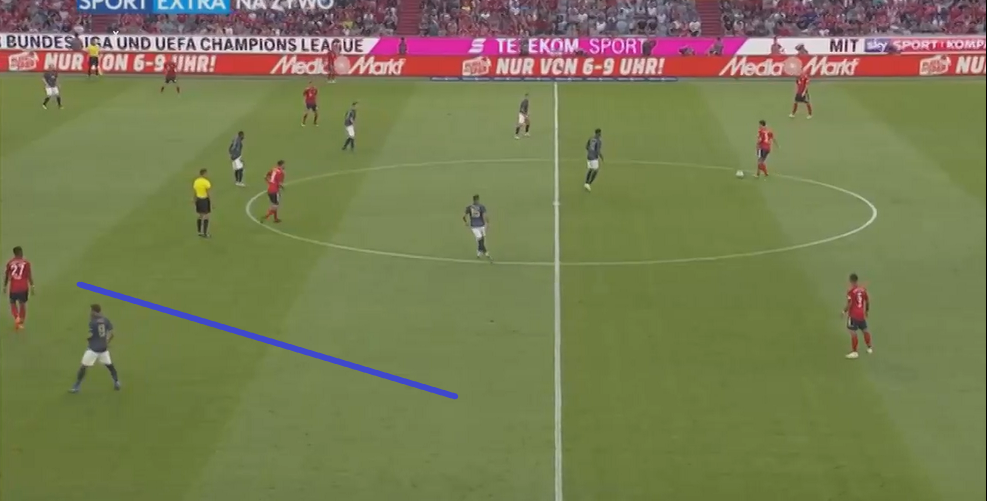 Bayern’s recent friendly against Manchester United, in possession they have a three-man defence, with left wing-back David Alaba positioning himself inside the attacking third to create a numerical advantage. This could be conceived as Alaba taking up an ‘Inverted full-back’ role.

A huge focus on the wide play and the willingness to concede the flanks is a key component of Kovac football style, we see in recent friendly how Bayern would concede the flanks and then have Ribery or Robben aggressively press to win the ball back.

Aggressive pressing is something Bayern have been accustomed to with Pep Guardiola in charge, and looks like it will continue in Bavaria under the new man. 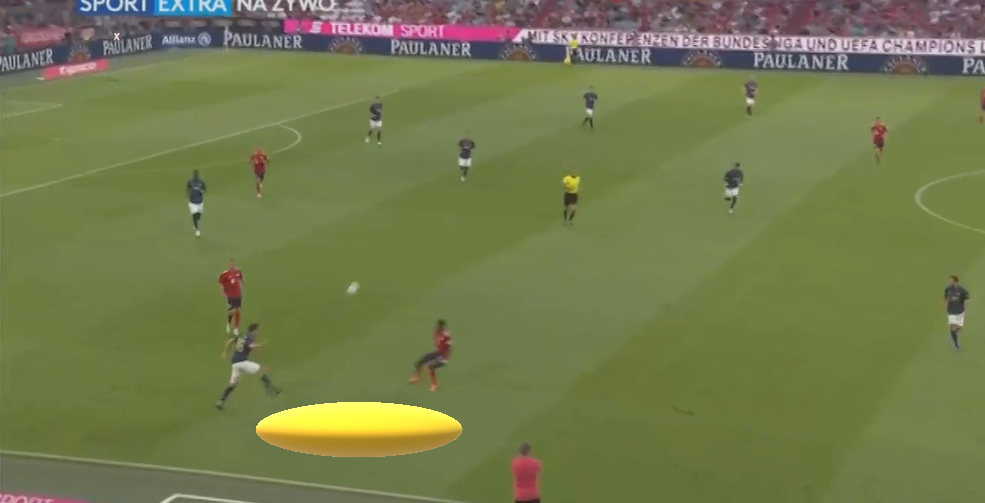 The Guardiola era in Munich saw record possession stats, although some claimed that at times, they felt Bayern never fully penetrated teams when the opportunities arose.
What Kovac will look to do in possession is recycle the ball until space opens up, when there can then be an opportunity for a quick direct attack. Pivotal to this will be Thiago and Javi Martinez.

They will drop into their own half to give the defensive base a passing line, and open up space for the ball to be recycled before quickly moving it into the opponents final third.

Leon Goretzka could become key to this type of football working for Bayern. Potentially if they adopt a 4-2-3-1 with Thomas Muller behind the main number 9 then the 2 deep central midfielders will look to get the ball either out wide fairly quickly, or through the central zones with combination play.

With Alaba and Kimmich, Bayern will also look for overlaps and combinations down the sides, creating opportunities to get crosses into the box. This is a tactic that will play to their strengths, with either Lewandowski a target for a headed cross or for onrushing players like Muller.

An area of concern, however, is the deeper build-up play. Using Neuer as a spare man and involving him in their build-up play has been a key part of Bayern’s recent success.
Though in their friendly with Manchester City, Bayern really struggled to build from deep against a team who pressed them really high.

Good technical ability is not lacking in the Bayern squad so this should be something that can be rectified fairly quickly, although being more direct when in possession in their own half could be an option against teams who press aggressively.

Many people will be wondering why Niko Kovac is the man to take Bayern forward, not the usual household name in European football that the Bavarians would opt for.

A small example of his tactical brain was in evidence against his new club in the DFB Pokal final. 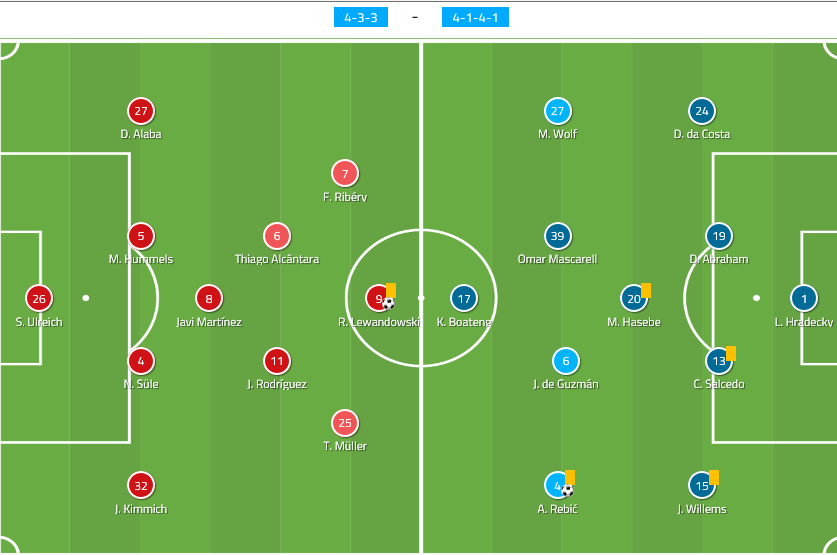 The two teams are shown here in similar formations. Eintracht though were more of a 3-4-2-1 in possession, allowing Bayern to build from deep but stifling the space when they got over or near the halfway line.

Bayern resorted to longer balls and more direct switches of play against the well-organised and disciplined Frankfurt. 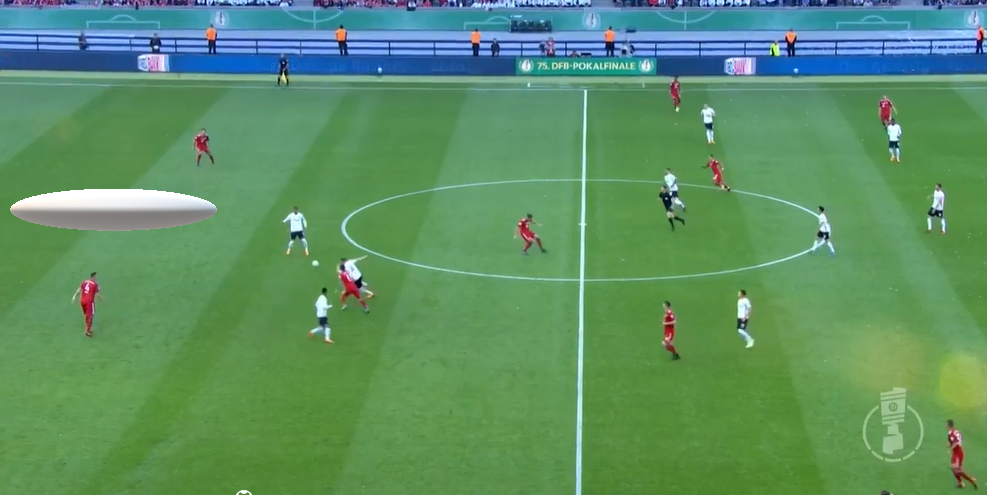 These are small examples of the effectiveness of Niko Kovac as a coach, but his midfield solidity, willingness to use the width of the pitch and his defensive organisation are areas which can help Bayern achieve success on all fronts. Being able to marry his more favoured direct approach with a possession orientated game will be a test, however.

The new man will take heart from the resources at his disposal. He will have world-class wide players, Ribery, Robben, Coman, who can utilise his preferred emphasis on width, aligned with full backs such as Kimmich and Alaba who can give Bayern a vast attacking arsenal down the sides.

Solidity in central areas can be found with effective ball players and aerial warriors like Boateng, Hummels and Sule.

The loss of Vidal has been supplemented somewhat by the arrival of Leon Goretzka, however, the defensive qualities of Javi Martinez and the technical ability of Thiago will become integral to Bayern’s play, direct or otherwise.

FC Bayern have undergone a few changes in style over the last few years, from the Guardiola years to Ancelotti’s pragmatism. This is again another altogether different approach.

Kovac was said to have at least 7 different formations in his time at Eintracht Frankfurt, so he will almost certainly be flexible at Bayern.

He will look to get the best out of his wide players and wing-backs, using them as attacking options down the sides to create overlaps or opportunities for crosses.

The midfield pressing will also be key as Bayern will look to be in possession in almost all of their games, so they will look to win it back fairly quickly.

Again using Neuer as a spare man will be a good option, but it will be interesting to see if they use the direct approach he seems to favour and get players like Muller and Lewandowski into the game quicker.

Regardless, the pressure is all on Kovac. Bayern have not won the Champions League since the 2013 win over rivals Dortmund. They have been outdone in several recent semi-finals, and yet to get back into another final.

He understands the pressures after being a player at the club but being a coach is an altogether different challenge and one I believe he will relish.

Aspiring analyst, cover a variety of leagues, matches and coaches across Europe. All views my own.