“I understand football through the ball.”

If ever a single quote encompasses the footballing identity and philosophy of a coach than the above does for Quique Setien of Real Betis. Setien was clear when delivering that quote that he sees the attacking phase as the most important phase of the game with his sides having a clear emphasis on possessing the ball and dominating the opposition.

Last season, Setien’s first in charge of Betis, was extremely impressive as Betis finished in 6th place qualifying for Europe and finishing one place above city rivals Sevilla. Beyond the black and white nature of the league table, however, Betis were one of the most attractive and interesting sides to watch in the whole of Europe. As a coach Setien is very much regarded as a tactician with his love of chess being evident in certain aspects of his preferred style and system of play, from the domination of the centre to the use of discovered attacks in wide areas the level and quality of work on the training field, translated extremely well in to game situations as Betis passed their way through opposition defensive structures time and time again.

With that said however this emphasis on possession and attacking football does come at a price for a Setien side and that price tends to come in the defensive phase where clean sheets were something of a rarity for Betis last season as they scored 60 goals but managed to concede 61.

The main talking point around the squad this pre-season was the loss of the former academy player Fabian who moved across to Italy to join Napoli for a reported €30M. Fabian was the playmaker in the Betis side this season and although he rarely got on the scoresheet or registered an assist his pass was often the one that led to the assist.

With that said the club has moved to strengthen in and add depth to key positions in the squad. We will look in more depth at two particular signings that have been made this summer as well as breaking down some of the attacking patterns that we can expect to see from Setien and Betis as they look to build upon their success of last season.

The Japanese attacking midfielder was one of the revelations of the 2018 World Cup in Russia with his goals and direct running from the left-hand side causing Japan’s opponents problems whenever he was in possession of the ball. With that said the fact that Betis managed to secure the signing of Inui as a free transfer from La Liga rivals Eibar is all the more impressive.

Inui is the type of technically and tactically intelligent player that will thrive for Betis under Setien. Able to play out in the wide areas of even centrally as an ‘8’ he will add a lot to the attacking phase for Betis whilst also working hard in the defensive phase to press or to close down passing lanes in the central areas. It will be equally important this coming season that Inui has the quality to play and combine in tight and compact spaces in the final third of the field, especially as next season we can expect to see more opponents dropping into deeper defensive positions to deny Betis the space to play. In this Inui has the quality on the ball to break down opposition defensive structures. 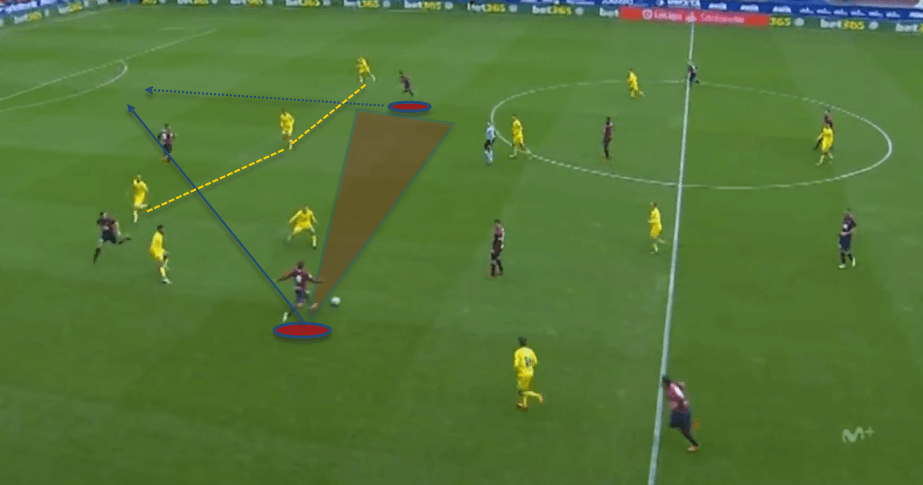 Here we see Inui in possession of the ball on the left side of the field. The opposition defensive line is relatively stretched but the main striker for Eibar has, somewhat strangely, already moved into an offside position.

Thankfully for Eibar, Inui has the quality on the ball to recognise this and look for a secondary passing option into the final third. His body shape as he looks to strike the ball suggests a lateral pass across the field but Inui uses a disguise in his pass and reads the run made by the far sided player before playing a diagonal pass on the ground through the defensive line and into the run of the attacking player. 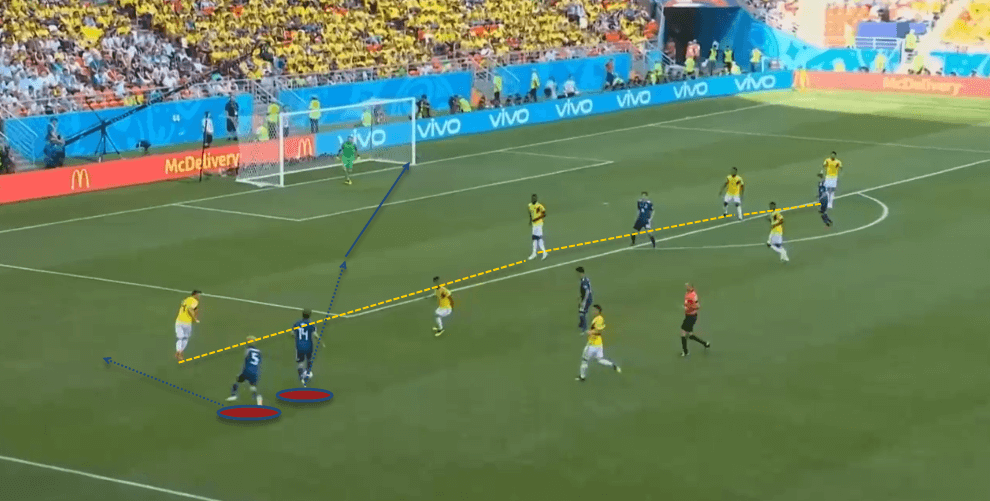 As well as being a creative and capable passer on the ball Inui also has the quality to carry the ball and drive through gaps himself in the opposition defensive structure.

Betis under Setien like to play with their wide attackers moving inside into the half spaces or even the central areas as both fullbacks move forward to provide the width. This structured movement will suit Inui well as he will find pockets of space that will allow him to isolate and attack defensive players.

As you can see here at the World Cup we see Inui in possession on the left side, the supporting player moves outside to create space and as he does Inui is able to drive through the gap in the defensive structure before beating the closing defender and looking to curl a shot into the far post.

The Portuguese midfielder has been signed by Betis for a reported €20M having originally looked to cancel his contract at Sporting Lisbon. Given that Carvalho has long been linked to a move to a top European side this can be seen as something of a coup for Betis.

Last season the Spaniard Javi Garcia was the controlling midfielder in the defensive midfield slot, it is likely that given the outlay on Carvalho we will see him start the season in that deep area.

Carvalho is a player with the ability to open up both sides of the field with his range of passing which will be important for Betis under Setien this season.

Here we see Carvalho in possession of the ball against an opponent that is in a deep and compact block ahead of him. Against teams that defend in this manner, and again Betis will face this more this season, there are two options in terms of progressing the ball through in the final third. First of all you can play through the block trying to find spaces inside, Otherwise you can play around the edge of the block to turn the defence and create space that way, this is where Carvalho comes in with his comfort in distributing the ball right or left from his central area he will force the opposition block to move and shift.

As well as being a figure that can add value in the attacking phase Carvalho is also comfortable in defending in open space or covering space in the defensive phase where his athleticism can be hugely beneficial to his team.

Here we see the opposition in possession on the right-hand side with the Portuguese defensive line stretched as the left back presses out to engage the ball and lengthens the space between the central defender and the left back. As the ball is played through this gap for the runner to move in behind however Carvalho reads the danger and moves out to cover the run and win the ball cleanly before moving quickly into the attacking phase for his side.

In the attacking phase for Betis, we see Setien impose a number of mechanisms in terms of player movements to both help in the build-up phase for keeping possession of the ball and to help create space further forward into the final third. 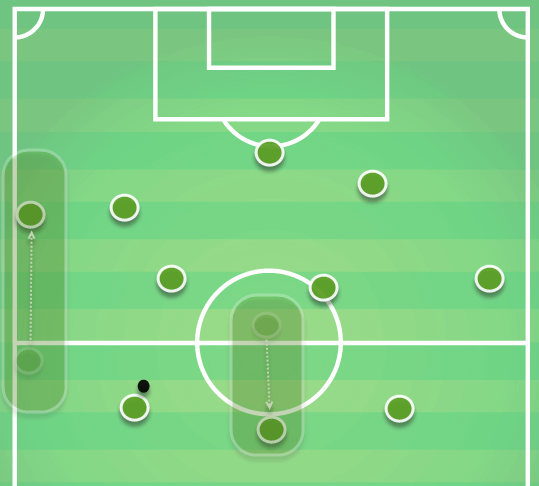 The first mechanised movement that Setien likes to see from his players sees the defensive midfielder dropping back into the centre of the defensive line. This immediately creates a back three with the two wide centre-backs splitting out into wide areas forming a chain of three that will allow Betis to circulate the ball quickly and efficiently from one side to the other in order to change the angle of the attack.

This forming of the back three also enables the second mechanised movement to take place as the fullback on the ball side of the field moves into a high position. This movement, in turn, allows the wide attacker on that side to move inside, this in a sense is the discovered attack from chess that we referenced earlier as the wide attacker moves out to empty the space in the wide area that is attacked immediately by the fullback.

On the far side of the field in the attacking phase, the opposite fullback also moves forward but to a deeper line initially in order to provide balance to the attacking movement. 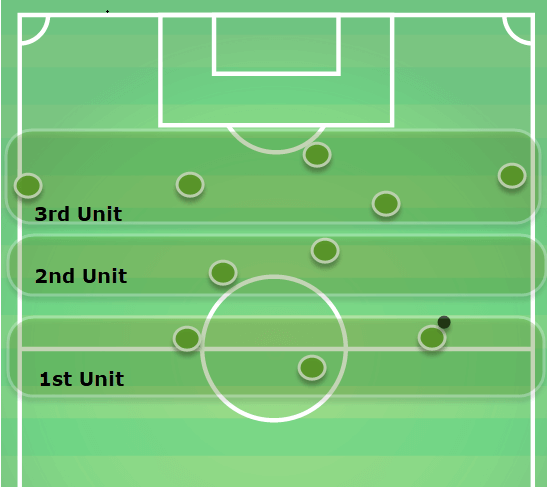 As the attacking phase becomes established and Betis have control of the ball in terms of possession we see the next phase of the attacking plan put into place as Betis move into three distinct blocks.

The first block has the three defensive players who form the base and give options for the ball to be recycled backwards if need be. The second block has the two central midfielders who provide a central option for the pass when the ball is in wide areas and the third block is a block of five with both fullbacks moving high to stretch the width of the field and both wide attackers moving inside to combine with the lone striker.

This established attacking pattern allows Betis to keep possession of the ball and dominate the centre of the field at the edge of the final third.

There is no doubt that this will be a difficult season for Betis under Quique Setien as they look to establish themselves as a top 6 side in La Liga. More clubs will have had time to study the method and style of play of Setien and they will have rehearsed defensive patterns to counter the attacking threat.

With that said however these countermoves will be natural to Setien given his love of Chess, we could well simply see the next evolution in an attacking phase from this exceptionally interesting coach.