Bayern Munich hosted cup kings Real Madrid for a European competition record 25th time last week. Prior to kickoff, both teams had made a strong case for being favourites to win the tie. Bayern Munich have had a resurgent season ever since Jupp Heynckes replaced Carlo Ancelotti. Madrid, on the other hand, proved their worth by holding off Juventus despite throwing away a 3-0 aggregate lead, before Cristiano Ronaldo scored a last minute penalty to take them through to the semi-finals. In this fixture, it was Madrid who yet again managed to secure a win after coming back from a goal down to win 2-1. It was a game in which Bayern had the upper hand but their lack of clinical finishing plus a mistake from Rafinha gifted Zinedine Zidane’s men an advantage going into the 2nd leg. 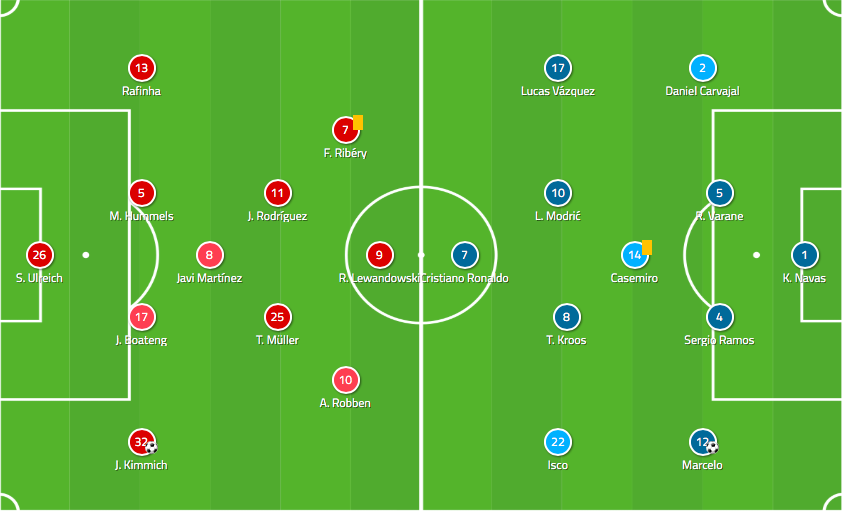 A few weeks ago I did an analysis between Germany and Spain in which I highlighted how similar their approaches were in and out of possession:

“It was quite obvious for everyone watching the game that both teams had highly skilled players who were all comfortable in possession. So the question coming into this fixture was which team would take the initiative (and risk) and take control, and which team would play a more passive role throughout the contest.”

In a way, the match between Munich and Madrid emulated Germany vs Spain except for the fact that the club sides have diverse player profiles. Also, there was more at stake in this fixture. But despite both teams pressing each other high in the early stages of the game, Madrid defended very conservatively, seeking to close down space and to prevent conceding any goals.

As mentioned, the early stages of the game saw both teams pressing each other in advanced areas. In the first 10 minutes, possession was turned over very frequently. Bayern pressed zonally, congesting central areas and dictating the direction of Real Madrid’s passing. Bayern’s risk to push Javi Martinez forward during the pressing phase paid off in the early stages as Madrid were forced into playing aimless long balls time and again, allowing Bayern to recover possession. After the 10th minute, however, a clear pattern was set. Madrid simply looked to defend well, waiting for counter-attacking opportunities, while Bayern dominated possession.

On the ball, Bayern’s approach was to carefully circulate the ball through the thirds, before giving freedom to their attacking (wide) players in the final 3rd. Very similar to what we witnessed during Pep Guardiola’s time in Bavaria.

Madrid used a flexible man-marking system, applying pressure from goal-side positions and Bayern used this to gain superiority over them. 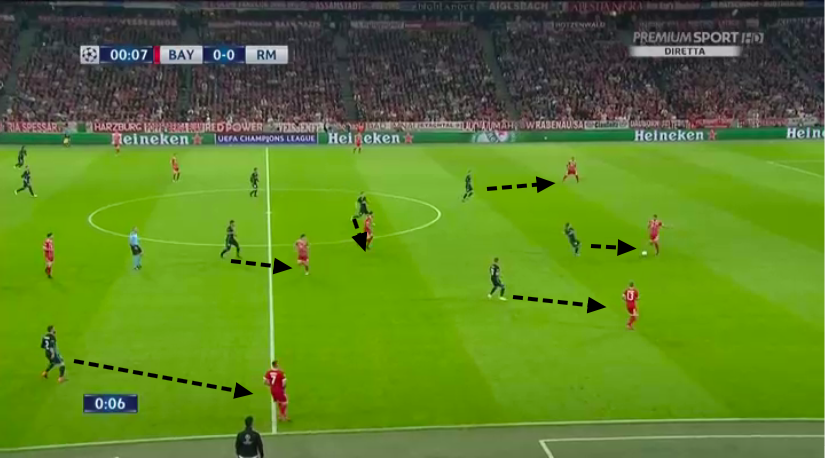 Their aim during the build-up was to entice Madrid to press them before finding players in-behind their first and second lines of pressure. There were two ways in which they managed to do so. 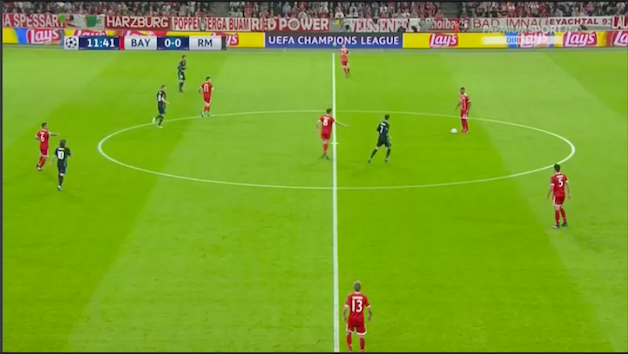 Boateng is in possession here. James and Thiago are ahead of him marked by Kroos and Thiago respectively. 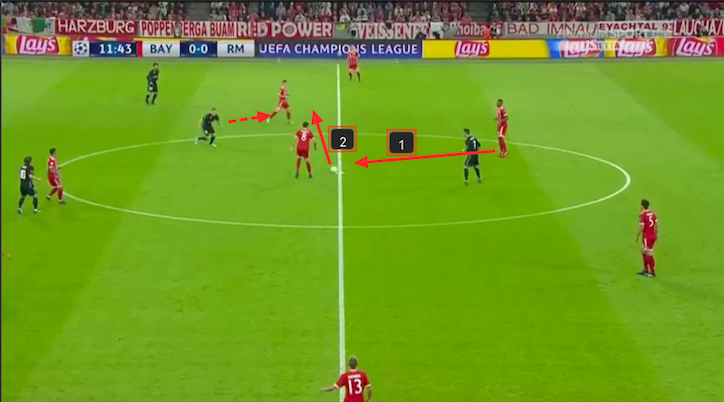 James drops to the halfway line and receives a pass from Javi Martinez. 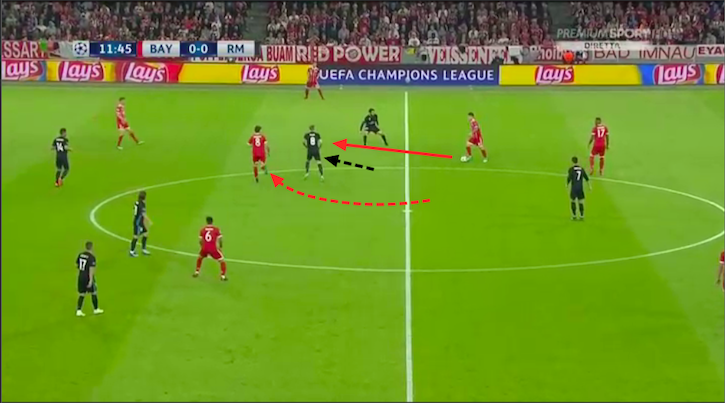 Javi Martinez’s movement drags Toni Kroos with him, giving James the time and space to play a penetrating pass into Mueller.

There were also moments when Bayern were able to play penetrating passes directly from deep areas when space opened up. Lewandowski’s and Mueller’s runs opened up a lot of space in advanced areas and both players always made themselves available as passing options. Lewandowski, in particular, drifted in front of the Madrid defence for most parts of the game playing as a target man.

2. Bayern would overload one area, drawing Madrid’s players towards the ball before switching play to an under-loaded area (standard principles of positional play)

Once a sequence of these moves was completed and they progressed closer towards the final 3rd, they looked to get the ball into wide areas. They weren’t at their best at getting in early crosses out wide throughout the game but they posed a threat nonetheless. Ribery, in particular, had a really good game, creating several chances from crossing positions which Bayern were unable to take advantage of. However, with David Alaba in the side, Bayern could’ve created many more chances. The Austrian has struck up a very productive partnership with Ribery under Heynckes’ management but was ruled out of the tie because of injury.

Robben’s injury in the 4th minute was also a blow down the right-hand side as Marcelo was rarely tested on the night. Unfortunately for the Brazillian, he played a part in Kimmich’s opener as he was caught out of position. After one of his trademark penetrating runs, the ball went out for a goal kick, which Sven Ulreich took quickly. While Madrid were still in the process of getting into position, Bayern played right through their midfield and into the space Marcelo had left vacant before Kimmich put the hosts ahead with a finish that deceived Keylor Navas.

Most of Madrid’s ball recoveries came from inside of their own half. Some of them were forced clearances that came from a well-executed high-press but the majority of them came from Bayern’s attacks breaking down. Bayern, however, were well positioned when they lost possession which prevented Madrid from breaking forward in transition.

Madrid’s limited time in possession was used to progress forward down the flanks with the aim of finding space in wide areas and putting early balls into the box. I already mentioned that Bayern congested central areas while defending, so Madrid played short passes between themselves in areas close to the touchline. Once Bayern’s players moved towards the ball they looked to switch play to the under-loaded opposite flank. This approach was unsuccessful throughout the game as Bayern doubled up on Madrid’s wingers out wide and their shifting and coordination when Madrid switched play was very good too. Added to that, counter-attacking is more effective from ‘inside’ areas and forcing Madrid to play out wide was exactly what Bayern wanted. 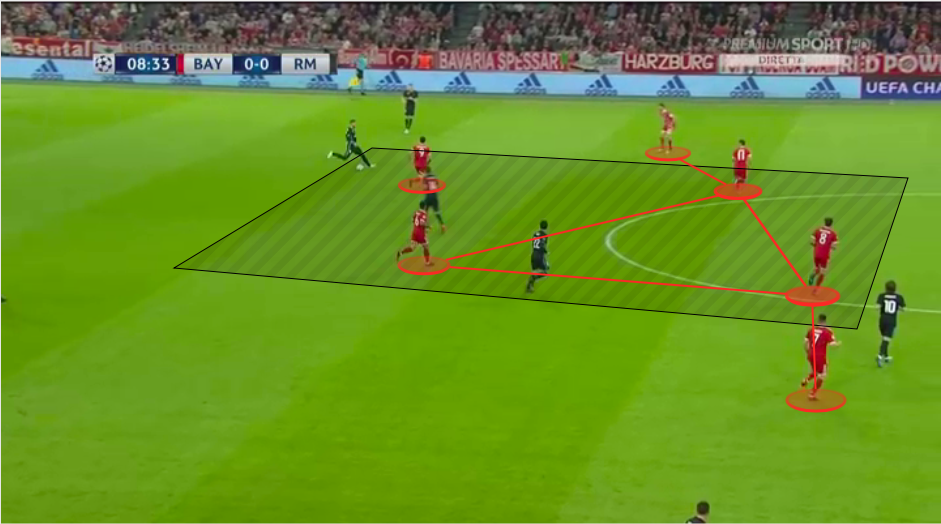 Carvajal and Vasquez were constantly outnumbered out wide while Isco was always playing too deep, which meant that Modric rarely had advanced passing options which could threaten the Bayern defence and force them to retreat.

Madrid’s loss of possession in Blue (dispossessions and turnovers) and Bayern’s interceptions in Orange, most of which came from wide areas. This reinforces the fact that Bayern defended the central axis brilliantly.

As Isco was constantly dropping deep to collect possession from Marcelo, Madrid also lacked presence in the half-space, near the 18-yard box, which left Cristinao Ronaldo isolated. This also left Cristiano Ronaldo isolated. Bayern also had good coverage across all 5 vertical zones and their wingers worked hard all night to help defend. Essentially Bayern’s dominance down the centre and high pressure forced Madrid’s key players to operate in zones as far away from the Bayern goal as possible. 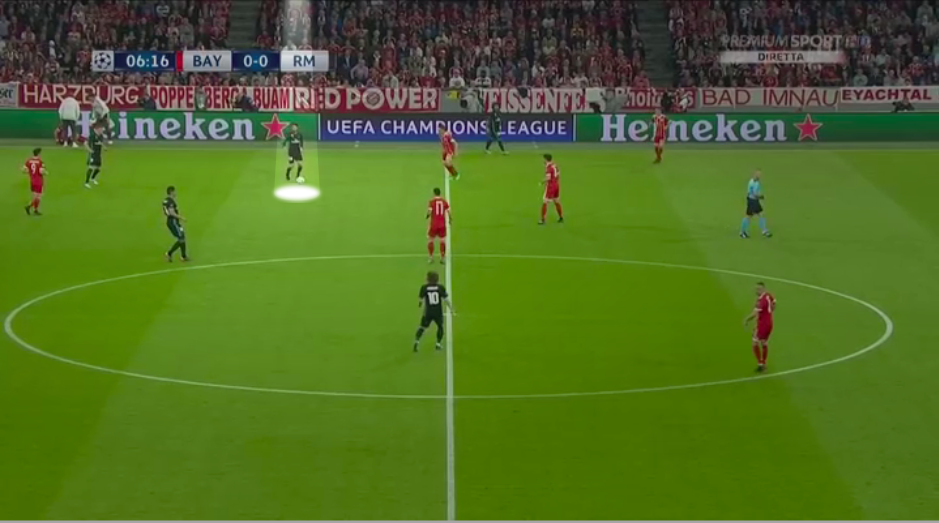 Isco on the ball near the halfway line. This meant that Madrid had 4 midfielders inside of their own half, with no depth to their attack.

During a rare spell of sustained possession, Marcelo scored a brilliant goal to put Madrid back on level terms just before half-time. After half-time, Marco Asensio came on for Isco. The game played out exactly as it did in the first half, with Bayern dominating possession and Madrid getting players behind the ball, resisting Bayern’s attacks.

In the 56th minute, Bayern won a corner, which was cleared after it was taken. Sule played the ball to Rafinha who controlled the ball on his back foot and under pressure by an onrushing Vasquez. He lost composure and an attempted pass back to Sule fell in the path of Asensio, creating a 2v1 situation near the halfway line. Needless to say, the ball ended up in the back of the net 7 seconds later, thanks to a composed finish by Asensio. Madrid struggled to create any real opportunities after their second goal aside from a Karim Benzema shot that was well saved by Ulreich in the latter stages of the match.

Benzema replaced Carvajal with 25 minutes to go, and Lucas Vasquez was moved to right back, which meant that Modric moved to the right wing. Their switch from a 4-5-1 shape to a 4-4-2 didn’t do much to help them going forward, but they did switch to a zonal, position-oriented approach when they sat in a low-block. At this stage of the game they managed to force Bayern into wide areas as well, but this didn’t do much to affect Bayern creative output. They continued to look for a goal; Ribery managed several shots on goal and good opportunities from set pieces were wasted. By the end of the night though, Bayern were left to rue their missed chances. 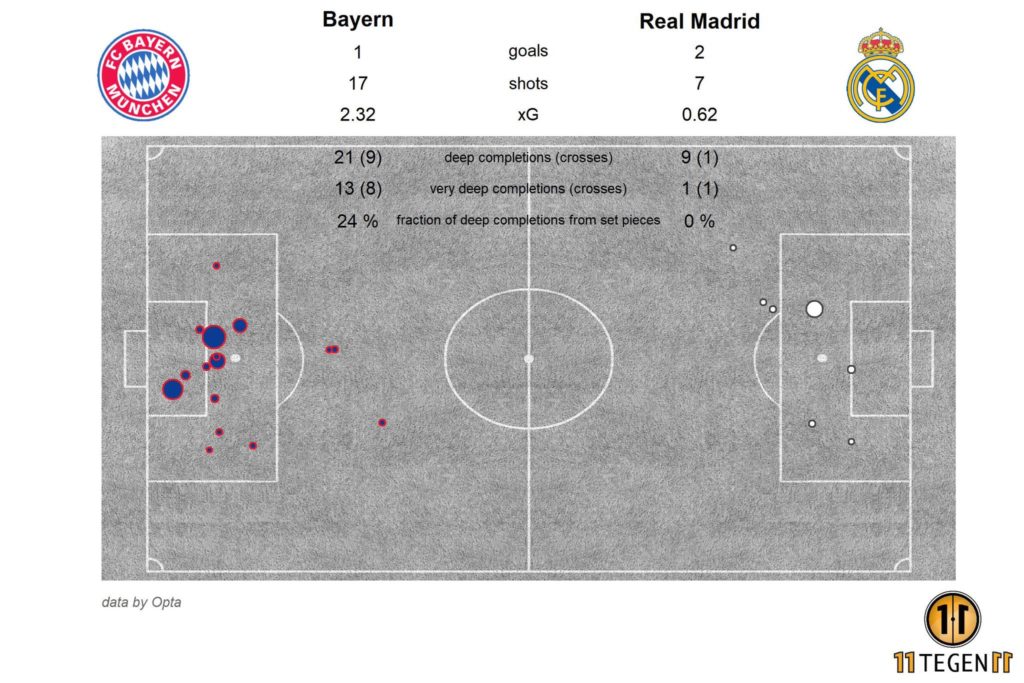 Bayern had a higher Xg (expected goals) return but failed to convert their opportunities. (Photo: 11Tegen11)

On the night, Zidane’s men were fortunate not to concede more than a solitary goal. Bayern played without several of their key players and still created quality chances, but failed to convert them. Madrid, on the other hand, did well to capitalise on Bayern’s mistakes but their general attacking play was disappointing, even with the introduction of Asensio in the 2nd half. Bayern’s high-pressure and central dominance restricted Madrid to playing in areas far from their goal. Ronaldo’s isolation throughout the game was proof of how well they defended.

Going into the 2nd leg, Zidane will have to make critical changes to his attack to ensure that they manage to pose a threat to Bayern’s defence. Madrid are known to be a fantastic counter-attacking team but they will need to be more effective around Bayern’s 18-yard area. A good spell of possession not only creates goal-scoring opportunities but it means that the opposition cannot score. After all… attack is the best form of defence right?