The race for second place in the SPFL this season is far tighter than it has been in recent years and Aberdeen have a real challenge on their hands. Rangers have started to reassert their financial dominance over the majority of domestic rivals with some intelligent signings and the return of Hibernian to the top flight this season under the astute management of Neil Lennon has led to extra pressure being applied to Aberdeen for the position of closest challenger to perennial champions Celtic.

With the league now having been split between top 6 and bottom 6 the race for second place looks as though it will go down to the final matches of the season.

The increased pressure at the top of the table added a sense of real importance to this match as Hearts made the long trip north to face Aberdeen at Pittodrie. It has been a difficult season for the side from the capital not only because their neighbours, Hibs, have outperformed them comfortably but also because their squad turnover has been extremely high with manager Craig Levein turning to the clubs youth system and blooding several teenagers so far this term.

Aberdeen on the other hand have performed extremely well this season with the added pressure from the likes of Hibs and Rangers forcing Derek McInnes and his side to find a consistency that they have perhaps lacked over recent seasons. Whilst the opponents in this match, Hearts, have focused on youth this season Aberdeen and McInnes have preferred to rely on experience with the resigning of Northern Irish international Niall McGinn in January being a case in point.

The match itself would provide an interesting contrast in styles with Aberdeen playing a 4-4-2 system to combat the preference of Levein and Hearts to play with three central defenders. Aberdeen would look to attack and combine down the wide areas whilst Hearts were more centrally focused in their attacking movements.

In the end Aberdeen ran out relatively comfortable 2-0 winners but there were a few key aspects of the match that led to this result.

With Aberdeen lining up in a fairly orthodox 4-4-2 structure there were still one of two surprises in their line up. Joe Lewis was in goal behind a back four of Shay Logan, Anthony O’Connor, Scott McKenna and somewhat surprisingly Graeme Shinnie. Whilst before joining Aberdeen Shinnie had primarily been used as a left back the club captain had played primarily for Aberdeen as a central midfielder.

Across the midfield we saw Gary Mackay-Steven on the right with Dominic Ball and Kenny McLean central and Niall McGinn on the left. In attack Stevie May was partnered by the 20 year old Englishman Sam Cosgrove.

Hearts lined up in a 3-5-1-1 system with Jon Mclaughlin in goal behind a back three of John Souttar, Aaron Hughes and Christophe Berra. They had Michael Smith at left wing back and Connor Randall on the right. Steven Naismith, Don Cowie and Lewis Moore were central whilst Euan Henderson looked to support Kyle Lafferty in attack.

Aberdeen attack on the left

It was interesting to see Derek McInnes line up with Gary Mackay-Steven (GMS) on the right of the midfield. The winger is predominantly left footed and had spent the majority of the season playing on the left wing.

His ability to cut inside on to his left foot however was heavily used by Aberdeen as they looked to penetrate the Hearts defensive line. With two forwards in Stevie May and Sam Cosgrove positioned slightly wide to occupy the two wide central defenders for Hearts there was space in the half space between the central defender and the left wing-back for Hearts, this space and passing lane was utilised time and again for Aberdeen as they attacked the Hearts penalty area. 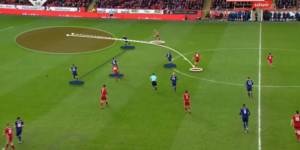 Here you can see the space that GMS has to attack on the Aberdeen right of the field. With the initial Aberdeen attack turned away and with the defensive structure from Hearts in disarray it only took a simple angled pass from the central player to completely bypass the Hearts defensive line and send GMS through on the Hearts goal.

This avenue attack was one that Aberdeen were able to utilise often with the Hearts coaching team making no effort to shut down these spaces. 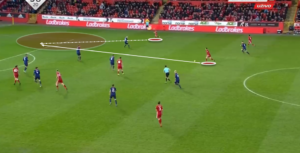 This was the lead up to the second Aberdeen goal. Dominic Ball has the ball in the centre for Aberdeen and Hearts fail to apply any pressure at all to the ball.

A simple through ball in the half space between the central defender and the left wing-back sends GMS though on goal and the winger coming in on his favoured left foot was able to simply open out his body and play the ball across the goalkeeper in to the corner of the goal. Once again the spacing of the Hearts defensive structure was ineffective in dealing with the threat from Aberdeen.

With Hearts favouring the centre of the field when in the attacking phase we saw Aberdeen move to apply pressure to Hearts as they tried to build up and access the final third. This resulted in Hearts missing out the midfield in their attacking phase and looking to play direct up to Kyle Lafferty in the centre forward position.

This direct play was easily defended by Scott Mckenna and Anthony O’Connor who dominated Lafferty in the air throughout the match. 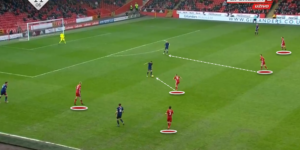 These simple pressing mechanics forced Hearts to play long and prevented them from building any periods of meaningful possession. As the match went on and Hearts efforts to find a way back in to the game became more desperate we saw Aberdeen continue to defend resolutely. With Hearts continuing to avoid playing in the wide areas Aberdeen remained compact defensively and were spaced in such a way that Hearts could find no way past the defensive structure in to the Aberdeen penalty area.

Here we see Hearts in possession of the ball centrally attempting to access the Aberdeen penalty area. Aberdeen have dropped in to a deep compact block with the two wide midfielders and the fullbacks tucking in to form a back six and deny Hearts any space or passing lanes in to the penalty area.

We also see the two central midfielders for Aberdeen holding their central position and shielding the centre of the field, another mechanism to prevent Hearts from playing in the final third of the field.

In the end this was a comfortable win in a match that could have and perhaps should have been far more difficult. Derek McInnes deliberately adjusted the sides structure and the focus of the attack to prevent Hearts from playing to their strengths.

It is interesting to see a sense of the evolution of McInnes as a tactical coach as he appears to be learning from his mistakes more effectively and making the necessary adjustments. With that said Aberdeen are still very much caught up in a real battle for second place.

Should they achieve that then expect to see McInnes linked to jobs south of the border with increasing regularity.