Normally the French Ligue 1 isn’t an interesting league to analyse because a lot of teams play similar styles and there aren’t great tactical revolutions. However, if you want to observe the next great players, your chances to watch a big talent are pretty high in France. The French academy system brought great players into the World-Football the last few years. Olympique Lyon is probably the team which produced the highest number of talented players alongside AS Monaco. Before that season they sold Alexandre Lacazette and Corentin Tolisso for more than 90 million euros.

Nevertheless, Lyon has the next group of talented youngsters who want to develop in Lyon and then probably go the same route as Samuel Umtiti or Corentin Tolisso before them. In general, Olympique Lyon is an exception in Ligue 1 because they not only have great players, their system and approach to playing the game are really interesting. Their coach Bruno Genesio wants to use all of his talented players. Against Nantes, he used a diamond in midfield which isn´t a common formation in the top league in Europe except for Italy. The biggest disadvantage of the 4-3-1-2 is the missing opportunity to play through the wings.

Lyon was capable of using the advantages four central midfielders in a diagonal position to each other gives you, simultaneously they occupied the wings in different ways which helped them to break through Nantes defence.

In this piece, I am going to take a look at Lyon´s play with the ball in their 4-3-1-2 against Nantes. So it won´t be a normal match analysis more an aspect analysis.

The team of Bruno Genesio impressed with a good positional play. They always occupied the important positions, they were able to move the opponent, open space and use that through different actions like the third-man concept.

In the first third Lyon created a 4v2 advantage against the two strikers of Nantes. Nantes pressed in a 4-4-2 system which didn’t work well because of the superiority Lyon could create out of their positioning.

In the build-up, Lyon created a diamond with both centre-backs, the central midfielder Lucas Tousart and goalkeeper Anthony Lopes. 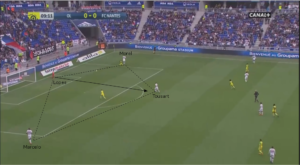 Here, we can observe the diamond nicely. The basic structure was important to overplay the first line of pressure. However, not only the basic diamond is crucial. Lyon also positioned perfectly and adjusted their position in reference to the position of the ball. For instance, both centre-backs are positioned wide in order to stretch the opponent shape and give themselves time to orient and control the ball.

Furthermore, Lyon wasn’t afraid to move the ball quickly a few times in order to attract the strikers of Nantes. As a consequence, the team of Genesio could open space to advance easily to higher zones.

Tousart received the ball from Lopes he had enough time to control the ball and play the simple pass to Marcelo. Due to the higher position of central midfielders N’Dombele and Aouar as well as their number ten Nabil Fekir, Nantes midfield-line had to move back. Therefore, the space between Nantes lines were too big. Here, Moutoussamy tried to press Tousart but was far too late. 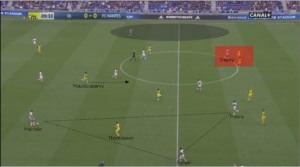 As we saw above. Tousart played the ball to Marcelo who could move forward. Lyon´s great positioning and the numerical superiority in the centre opened different options for Marcelo. Marcelo could switch sides by playing the ball back to Tousart. Moutoussamy had to travel back in order to deny passes in the centre. Furthermore, Marcelo has the option to use the triangle with Rafael and Traore. Thomasson had the responsibility to close the passing line to Rafael while pressing Marcelo. This opened the channel to Traore which Marcelo used.

The strength of Lyon’s possession game was the fact that they always had options to continue the attack. Here, Traore could pass the ball to N’Dombele in the centre or Rafael on the outside. In the end, he switched the play to Lyon´s left back in the grey marked space. Due to Depay´s position, Mendy received a lot of space on the left.

The occupation of the wings

The biggest challenge for a team playing with a diamond in midfield is the occupation of the wing. If you can´t play the ball outside the opponent can close the centre without fearing a wing attack.

There were different options for Lyon to occupy the wide space. For instance, the full-backs pushed very high and were involved in the attacking play constantly. Especially over the left side, Lyon could create a few chances after diagonal passes in the centre or crosses from Mendy.

Besides the high fullbacks, Lyon used their strikers in a wider position. As we saw in the example above, Depay and Traore were positioned between the centre- and fullbacks. As a consequence, neither of both defenders could push out of position to support the defending process in the centre because Depay or Traore would use the open space.

The third option for Lyon was the movement of Fekir. On some occasions, Fekir drifted out to the wing which created a 4-3-3 short-term.

Fekir moved out of position in order to create a 4-3-3. Depay is still positioned between the fullback and centre-back while Traore waited in the centre. As a consequence, Lyon could use the wings because Nantes wasn’t compact enough. Therefore, N’Dombele could play the pass in the red marked space.

Lyon created a good amount of chances in that game. They used their numerical superiority in the centre nicely. Most often they could break the defensive lines and pass the ball in the half space to one of their central midfielders. From the half space, they could try to play the direct pass to the strikers or they got access to the space between the lines by playing diagonally over the fullbacks. 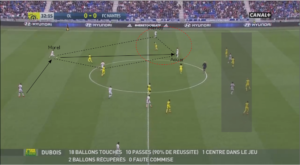 Lyon was capable of switching the play to the left side. Because of the numerical superiority, Lyon had a 2v1 situation on the left side (red circle). Again, you can observe the well-structured shape of Lyon in possession. Again, Morel had three passing options. It is important that Aouar was positioned between the lines, because that is harder to defend, and he could easily play a lay-off pass to Mendy. Furthermore, Depay and Traore prevented Nantes defenders from pushing-out and therefore gave Aouar the time to turn with the ball. 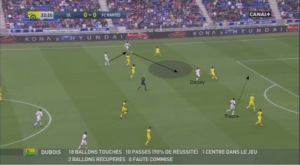 Together Mendy and Aouar could attack the open space. Nantes fullback and the winger had to push out in order to press Mendy. Depay’s movement helped to open the grey marked space while Traore attacked the space behind the lines. Again, Moutoussamy was too late in position because he had to run a lot in the centre to close the appearing spaces.

The passes to the wings were important for Lyon to open space in the centre. That’s why they often attacked with diagonal passes from the fullbacks to the strikers. Or they used their majority in the centre and the open space due to Nantes missing compactness.

Here, Tousart played a flat pass to Aouar who played a lay-off pass to Fekir. Fekir could attack the open space (red marked) with a quick dribbling which challenged Nantes a lot.

Lyon not only has a bunch of talented players, they also have a solid structured positional play. The diamond in midfield helps them to overload the centre and create chances from there. Especially the different player profiles of Tousart, Aouar and N’Dombele fit perfectly together. So, you shouldn’t only watch Lyon because of their talents. It is also worth watching because of the good combination play of Lyon. Now Lyon is in the perfect position to secure the second place in the league table.