Despite their 3-2 loss to Strasbourg – that made them unable to take advantage of Marseille’s tie against Guingamp – Lyon’s campaign showed that the club owned by Jean-Michel Aulas has all the needed tool to compete for the best sports on Ligue 1’s table and, maybe, to challenge PSG for the title next season.

Sure, Lyon is still far from to be a finished product, but a strong summer recruit campaign could further strengthen the side at Bruno Génésio’s disposal, turning them from pretender to contender.

From a tactical point of view, Génésio lined up his team this season in a 4-2-3-1 formation although he recently used a 4-3-3 system and also a 4-4-2 diamond one. It means Lyons’ manager changed his team pattern but retained a four-man backline as common trait of every set up he opted for. 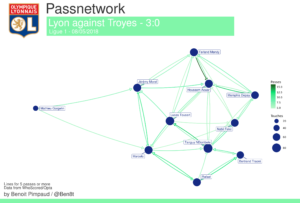 With Anthony Lopes as starting goalkeeper, Marcelo and Jérémy Morel acted as centre-back starting duo. It has been a solid pair at the back with two complementary players paired. In fact, Marcelo is a gifted ball carrier (87.6% of passing success) whilst Morel is more a defensive cornerstone with his 1.7 tackles, 3.2 interceptions and three clearances per game.

Things have been more varied at full-backs where former Manchester United’s Rafael and former Ajax product Tete shared the duties at right back while Brazilian Marçal and Ferland Mendy – who provided five assists – alternatively occupied the left-back spot.

Lucas Tousart has been the centerpiece in the middle of the field. The 29-years old midfielder provided a strong presence in front of the backline. He has been defensively effective by producing 2.6 tackles, 1.4 interceptions and two clearances per game in Ligue 1 and also producing a good effort with the ball at his feet when it comes to direct the flow of the game (85.8% of passing success).

Up front, Nabil Fekir has been the key part of Génésio’s team.

With Lyon mainly playing a 4-2-3-1 system, Fekir occupied the no.10 spot, although he enjoyed the freedom to roam all around the final third of the pitch. It was not unusual to see Fekir occupy one half-space during Lyon’s buildup play. With Lyon moving the ball higher the field, Fekir tried to find open gaps between the opposite’s midfield and backline. Once he has got the ball, Lyon’s attacking midfielder quickly tried to attack the depth.

When Génésio switched from the aforementioned 4-2-3-1 to a three-man midfield, Fekir retained the same attacking midfielder role but he benefited from to have the midfield trio of Tousart, NDombele and Aouar at his back. It allowed Fekir to continue to occupy the no.10 spot but also let him able to move in wider zones from where to support Memphis Depay and Bertrand Traore.

The picture above highlights Fekir’s position at no.10 spot in the final third of the field.

That said, Fekir enjoyed success from the way Génésio utilized him and he answered back by producing 18 goals and seven assists and also adding 1.9 key passes and 3.1 dribbling per game. It means Fakir has been good enough to be Lyon’s top goal scorer alongside Mariano but also his team’s second assist man just behind Depay (13).

The offensive combination between the players up front have been a key part of Génésio’s tactical approach with whoever played between Fekir, Depay, Mariano and Traore able to provide nice movements to attack the goal or to open spaces exposed by the teammates.

During the attacking phase, Lyon doesn’t use both full-backs, retaining the one on the weak side narrowed in the way to help the defensive oriented players to prevent opposition from get Génésio’s side on counter should they bypass Lyon’s first line of pressure when the ball is lost up front.

On the other side, Lyon’s midfielders are superb on get the ball from the backline and launch quick transition when the ball is gained. The main rule when the ball is conquered on defense is to reach the offensive players up front as soon as possible.

At the end, Génésio built a balanced side: strong at the back and dangerous when attacking. Should Aulas be able to retain his team’s offensive talents and also to add more depth on the bench, Lyon could really challenge PSG next term or, at least, reach a Champions League spot.