The German national team from 2014 was the best team in the whole tournament and there was no doubt they deserved to win the World Cup. Especially, after they won against Brazil with 7:1 in the semi-final in a way we have rarely seen before. During that title run, they had a great team. However, compared to their squad from 2014 Joachim Löw has now more different options to choose from in Russia. One of those additions is Leroy Sané.

The young winger who played a crucial role in Manchester City´s title run this year offers Löw an option he didn´t have in 2014. Sané brings the quality to isolate in 1v1 situations and therefore break down deep defensive blocks by going past a defender with a spectacular dribbling. The quality of real winger who can dribble and score goals on the highest level wasn´t available 2014 for Löw. Leroy Sané is probably one of the most interesting talents in the World Cup if he is able to receive a starting spot in Germany´s filled midfield.

As I mentioned at the beginning, Sané is a young, fast and highly skilled dribbler. Not only are his dribbling’s effective they also look elegant. Sané uses a lot of touches during his dribbling which allows him to change direction in order to unbalance the defenders. Due to his agility, he is capable of getting between the lines by splitting the defenders and let them look like training dummies.

Sané typically uses a variety of body feints to unbalance defenders. His recognition of the foot which the defender burdens is on a high level which the following example shows. First of all, he uses the first feint when he touches the ball the first time. As a consequence, he distances the defenders which give him more time to control and observe the given structure.

Here, we see the distance between West Hams right back and Sané. However, Sané faces a 1v2 situation because the midfielder tries to double him. Due to his moving direction and body position, he denies the penetration towards the centre. That´s why Sané dribbles towards the right side in the opposite direction. But, the goal of positional-play and normally most attacking styles is it, to get access to the space between the lines. Therefore, Sané needs a body feint to ultimately unbalance the defender.

His direct change of direction gets the opponent unbalanced because he can´t adjust his position quickly enough. He probably anticipates a movement towards the centre, but Sané tight control allows him to change direction quickly. Here, he moves again in the opposite direction, the defender has his whole weight on the left foot. As a consequence, he can´t tackle and Sané can dribble towards the centre. 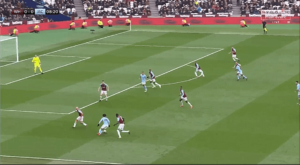 With another change of direction, he is able to not only get access to the centre but also to deposition the right-back who can´t even try to tackle Sané. The young German prefers to dribble with his left foot and rarely uses his right one in those situations however he moves the ball quickly between out- and inside of his left foot what makes it hard for defenders to tackle without fouling him.

For Joachim Löw his dribbling from the sideline towards the box can be used as an action to open space and pose problems for the opponent’s defence. 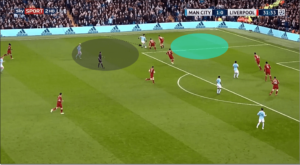 Sané can dribble towards the box, because of his speed and dribbling ability many teams can´t defend him with only one player. If they still try it Germany will have a quality superiority because Sané is hard to stop in those situations, especially weaker teams will try to control him by attacking him with to defenders. This creates space for the ball-near midfielder, like in the example above. Imagine a player like Kroos or Draxler with their good shooting ability will receive that much space close to the box.

Besides creating space, Sané is even capable of mastering those challenges. Here, he simply splits the two defenders by indicating to dribble towards the centre. In the end, after one touch he changes direction again and uses the space the defenders left. 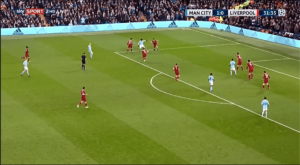 Sané isn´t only a dribbler who can shoot. At Schalke, he learnt how to move without the ball and made a huge step under Pep Guardiola. Off-ball movements are really important for a winger. It helps you to be one step ahead of your defender and therefore to be in an advantageous situation. 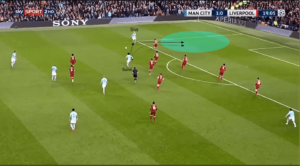 Here, for instance, Sané realizes that they can create a 2v1 situation and that Silva needs a passing option in order to attack the marked space behind Liverpool´s defence. After he passes the ball to Silva, Sané quickly moves between the defenders in the open space and Silva can pass the ball to him. Because of his awareness of the situation and City´s positional play, Sané receives a 1v1 in the box which is hard to defend.

In the following situation, Sané shows that he not only sees open space but also understands the context of the situation. A sign of great intelligence. Against deeper defensive blocks which Germany will face, a necessary ability.

The young German passes the ball to Fernandinho and then quickly sprints into the open space behind the lines. He realises unconsciously that Silva’s position is ideal because the right-back has the follow the Spain midfielder in order to press him. This positional superiority of City is perfectly exploited by Sané and Silva. By using the third man concept, Sané ultimately gets behind the last defensive line of Liverpool. Again, he not only has the physical advantage due to his speed he also perceives the hole in the defence quicker than his opponents.

In comparison to Manchester City, the winger in the German national-team don’t position that wide. More frequently they push into the half-space in order to open space for the overlapping full-backs.

Therefore, Sané has to adjust his movements, because he has to participate in the passing in a different way. Clearly, in Pep’s positional play Sané sometimes found himself in a central position, in Joachim Löw’s system he will probably face those situations more often. However, his positioning is good enough to persist in tighter situations. 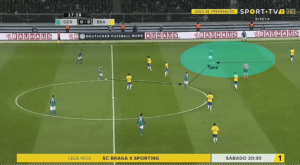 Supportive movements in order to break the lines are important in positional-play. Joachim Löw created a similar playing style with some principle of Juego de posición. Therefore, he needs players who are aware of the situation and position according to the present structure. In the example above, Sané establishes a triangle which gives Draxler an immediate passing option in the open space after he receives the pass from Kroos. In that way, Germany can fully take advantage from the uncompact Brazilian shape.

Clearly, if Sané couldn’t score goals he wouldn’t be such a high valued talent and play for Manchester City. At Schalke 04 Sané was yet a dangerous goal scorer. At Manchester, he has continued his development. He unifies a great shooting technique, the decision making to shoot in the right situation and a high game intelligence. 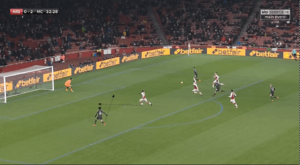 Here, City was able to counter-attack. Leroy Sané makes an intelligent movement in the opposite direction of Arsenal’s defender. Because of the fact that Arsenal’s defender can’t see him and the ball simultaneously Sané moves towards the first post in order to surprise the defender which works perfectly and Sané scores in the end. He shows that he understands how to move to receive an edge over his opponent. Most strikers would have probably moved towards the second post which is also plausible but harder to finish. 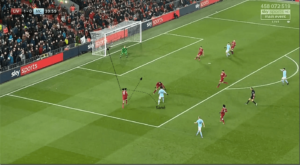 His great shooting technique allows him to shoot out of his dribbling. Here, he wins the 1v1 and only needs a glimpse to see that the goalkeeper is positioned in the centre and therefore the near-post is open. Really impressive is the fact that he smashes the ball with high accuracy while a defender is close to him. In those situations, he is a big threat to the defence because he can hit the ball perfectly. Shooting from long-distance is consequently no problem either for Sané. Against ultra-defensive teams, this can be an option to score goals or open space for team-mates because the defence has to react to his abilities.

Why Joachim Löw will probably choose other players to start

Leroy Sané can play a great World Cup and be an important part of Germany´s squad. However, it is possible that Joachim Löw prefers other players. His greatest weakness is his passing ability, especially, his through-balls. Leroy Sané is good in creating opportunities through dribbling and intelligent movement. But, his passing skills are far away from world-class.

His decision making is not perfect in those situations. A few of his decisions make sense, however, he either plays the pass too late or inaccurate. More often he tries to pass the ball in situations in which the defence is settled and there is no open space. Furthermore, his crossing is ok, he made progress over the course of that season. Especially, when he beats his defender 1v1 his crosses can be a threat to the defence. But, in those situations, he again shows a lack of technical ability to consistently cross the ball nicely.

Without the ability to play through-balls consistently players like Reus or Draxler suit better to Germany´s style of play. However, if Joachim Löw is capable of adjusting the tasks of Sané´s position he can use his full potential. Because Sané is stable under pressure, he can participate in quick combinations in tighter space and his dribbling is effective even under pressure. In the end, he will be most effective when he can start from a wider position and gets supporting movements. All in all, Sané is a valuable offensive threat for Löw to bring on in a tight game or against opponents who lack the capability to defend on the wing.