After leading Eintracht Frankfurt to avoid relegation in 2016/17 campaign, Niko Kovac managed the Eagles to reach the top half of the Bundesliga table this season. His work didn’t go unnoticed. In fact, Bayern Munich selected Kovac to become their next coach as the successor to Jupp Heynckes.

Maybe Kovac is a bit inexperienced – having just Bundesliga seasons and a group stage exit with Croatia in the last World Cup under his belt – but his work at Frankfurt has been remarkable as he showed tactical knowledge and strong leadership over there.

From a tactical point of view, Eintracht played a 5-3-2/5-2-1-2 formation this season, with the variation depending on Kovac’s choice to line up a three-man midfield or a reversed triangle with an attacking midfielder behind the forwards. They have been marked by high-pressing and ball circulation mixed with direct attacks towards Sebastien Haller and Ante Rebic. 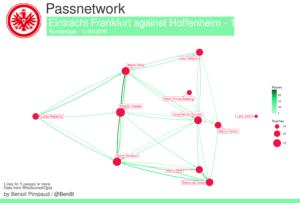 Without the ball, Eintracht force opponents to play out wide with the three interior midfielders providing central compactness in order to prevent opponents to move the ball internally. At the same time, the wing-backs collapse behind to build a five-man back line. With the opponents moving the ball in wider zones, Eintracht start to aggressively press also closing every passing line around the ball carrier.

Eintracht press with the ball into wider areas to regain ball control or force the ball carrier to make long passes.

Their defensive approach has been efficient as confirmed by Frankfurt’s data. In fact, although they allowed 44 goals, Kovac’s side are the sixth best in the Bundesliga when it comes to expected goals against (xGA) with 38.37. They are also sixth in terms of shots allowed per game with 11.6. The fact the Eagles are focused on pressing, ball recovery and closing the passing lines is highlighted by their 16.3 interceptions per game: that’s the second-best performance in this ranking: just Domenico Tedesco’s Schalke posted a better rate (16.8).

Despite their 5-3-2/5-2-1-2 shape – which should structurally make it hard to play high up the field – Frankfurt are able to press opponents into their own half. When a wing-back is pressing high up, Frankfurt’s backline slides on the strong side form a four-man defence to maintain stability.

Eintracht start their pressing high up the pitch. With the right-wing pushing higher up, the other defenders slide on the strong side building a four-man backline.

This high pressing action has two goals, namely, win the ball in more advanced zones or force rivals to make long balls which can be easily defended by Kovac’s centre-backs. David Abraham is the man charged with the duty to cover the depth. Frankfurt’s high backline helps them to play this high-pressing. After the ball is won back, the goal is to attack depth as soon as possible.

Their build-up is more patient than what you would expect from a side labelled to play a direct brand of football. Eintracht are good at recycling the ball and move it until an opportunity occurs to send the ball into the opposite half. During their build-up phase, the centre-backs split out wide whilst the central midfielder remains close to the backline, providing a needed passing line.

A key part of Kovac’s game plan, Japanese Makoto Hasebe, is charged to fuel the play in front of the backline. Despite his age (34 years old), Hasebe is one of the team’s best players when Eintracht are in possession, when it comes to distributing the ball (88.5% of pass success).

The former VFL Wolfsburg player has been a key part of the Frankfurt team during last season’s escape from relegation, when Kovac also lined him up as a sweeper.

Kevin-Prince Boateng is another recruit that enjoyed a second youth under the Croatian manager. The former Milan footballer has been one of Eintracht’s most utilized footballers by Kovac and he responded well, recording six goals and one assist.

The wing-backs push higher up the field, adding width to Kovac’s side. The interior midfielders move into their own half-spaces in order to create positional superiority at the back of the opposition’s midfield. These interior midfielders can also support Sebastien Haller and Ante Rebic attacking deep.

Bayern Munich is Kovac’s next step in his coaching career. The Croatian coach already has tasted Die Roten environment as he played over there from 2001 to 2003 under Ottmar Hitzfeld. But the task to lead the Bavarians as manager will be tougher. First and foremost, Kovac will face the task to manage a locker room loaded with star players. That’s a much different situation than the one the Croatian faced at Frankfurt. Bayern’s playing style is also different. Time will tell us if Kovac’s emphasis on direct football will be applicable at the Allianz Arena or if he will have to rely on the possession-based brand of football that Bayern’s players are more accustomed to.