In the Bundesliga, Bayern Munich lost their encounter with Bayer Leverkusen. Leverkusen dominated in the early stages of the clash but the guests took control of the game and revealed some issues of the home side. Kovac’s man won the first half with a goal by Leon Goretzka, but Leverkusen made a comeback in the second half with a great free kick and two counter-attack goals. This tactical analysis will explore these crucial factors of the game.

Bayern opted for their usual 4-2-3-1 formation which transformed into a 4-4-1-1 or 4-5-1 in defence with Thomas Muller and Kingsley Coman dropping to the midfield line. On the other hand, the recently appointed former Borussia Dortumund coach Peter Bosz employed his trademark 4-3-3 with the same intense manner. The expectation towards Leverkusen and Bosz’s system is quite high since the fans hope he will utilise the potential of their young talents, especially Kai Havertz. 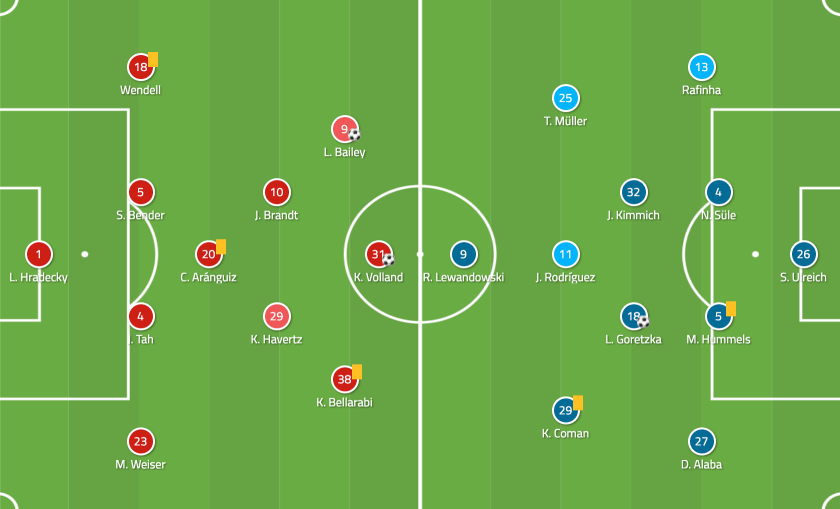 Leverkusen started with a high intensity that appeared in high pressing and aggressive counter-pressing. This can be an effective weapon to score early on since this aims to force to opponent back and not let them escape the pressure to breathe. Therefore, when they lost possession, Leverkusen counter-pressed with a man-oriented fashion to quickly win the ball back.

Even at goal kicks they stayed high. On these occasions, full-backs Wendell and Mitchell Weiser pushed forward to pin the opposite full-backs. This meant Jonathan Tah could be left in a one-on-one situation with Coman if Bayern bypassed the press. This will be important later.

In pressing, Leverkusen used a 4-3-3 formation where the basic idea of Volland’s role was to cut off the passing route between the Bayern centre-backs. Meanwhile Bellarabi and Bailey positioned themselves around the half-spaces to get quick access to the opposite full-backs.

One of the patterns in Leverkusen’s pressing scheme was to trap the opponent. The setup was designed to apply pressure from two directions on the centre-back in possession and invite the pass towards Kimmich who was left open. The instant the pass was made, one player rushed on to separate from the ball and set up a dangerous counter-attack.

The change started in the sixth minute when the guests exploited the space behind Weiser with a through ball towards Coman. This led to a corner which allowed Bayern to breathe a little bit. Now they could use the press to disrupt the opponent’s play. In the ensuing minutes, Bayern caused serious issues for the home side by building from deep.

By the time of 11th minutes, the whole game had changed. Bayern were able to set up their pressing system, and by implementing their counter-press they become more stable in the game. At this point, Leverkusen struggled to reach the opponent’s final third.

In pressing, Bayern used the 4-2-3-1 shape with an interesting tweak to it. The concept was to using man-marking in the middle while the wingers were responsible for the opposite full-backs.

Moreover, the tweak was asymmetric within the formation since Coman’s positioning was based on the position of Weiser. Therefore, we could often see Coman in deeper, whilst Muller occupied higher positions due to his task. He stayed somewhere between Bender and Wendell. Firstly, he pinned the full-back, but when the situation required he ran diagonally to press while blocking the way to Wendell.

In some cases, Wendell provided the outlet for Leverkusen. However, by the time the ball had travelled Muller was able to shift, close him down and force play backwards.

Bosz’s system is famous for the good connection between its players. The major element of this is the spatial awareness that allows the players to create such a good connection. In addition, there is a pattern in the system that aims to create space for the full-backs who advance down the sidelines.

In this period of the game, both sides often sat back in their defensive structures while the opponents tried to break it. Bayern attempted to overload the oppositional last line with James occupying space in there besides the narrow wingers and Lewandowski.

As mentioned earlier, Bosz often ask his full-backs to occupy high positions. However, without proper pressure this could be a very dangerous situation. Bayern were aware of this flaw and from the beginning aimed to utilise Coman’s speed in behind Weiser. In the 40th minute, Leverkusen failed to applying proper pressure on the ball which allowed Bayern to target Coman with a long ball. This led to the opening goal.

For the second 45 minutes Bosz had to change things, so he replaced Havertz with Baumgartlinger. In turn, this led to a formation change. Leverkusen switched to a 4-2-3-1 where Baumgartlinger and Aranguiz paired up as a double pivot.

Thus in the second half, the home side’s formation mostly fluctuated between 4-2-3-1 and 4-4-1-1 depending on the situation.

Leverkusen started better in the second half since Bayern felt able to sit back due to their lead. However, they were not able to create quality chances, so it was out of blue when Leverkusen equalised with a great free kick. After that, Bayern become more active in the attacking phases which resulted in riskier play from the Bavarians. As they pushed forwards, Leverkusen gained space which allowed them to score two more goals.

Despite the wonderful result for the home side, Bosz’s system has some flaws which will be a difficult task to deal with. However, considering the short period since the Dutchman was appointed, this is really good so far. The squad and the system fit together, therefore it holds lots of potential that can give a second chance for Bosz, and also Leverkusen’s talents, to shine.

Meanwhile, Kovac cannot be as happy since with this loss RB Leipzig edged closer to them. In the first half, they showed great quality in gaining control of the game but lacked something in their finishing. Fortunately they were able to score, but in the second half they had too much risk in their performance.