At just ten years old, Kenan Yildiz became one of the youngest footballers to ever sign a deal with a sports brand. Now, seven years later, it’s clear why Adidas couldn’t wait to sign him. Yildiz was at Bayern Munich for three years before signing his contract with Adidas. He had attracted the scouts’ attention because he could outplay his opponents with ease. As he established himself as the game-changing number 10, he was compared to Mesut Özil, although this comparison was partly due to Yildiz’s Turkish origins.

This tactical analysis provides an in-depth scout report of Juventus’ Kenan Yildiz and examines the 17-year-old’s playing style and characteristics. In addition to understanding how and where Yildiz plays, this analysis will also identify the style of tactics where he is most likely to thrive. Is he the next player to make his way into elite football under Massimilano Allegri?

Kenan Yildiz was born in Germany but he decided to represent Turkey – the country of his parents. Currently, he is one of the leaders of a very interesting Turkey youth national team. Yildiz joined Bayern youth academy at the age of 7. He was a part of a very interesting generation of Bayern players born in 2005 which includes the likes of Paul Wanner, Arijon Ibrahimovic, Tarek Buchmann, Vincent Manuba, Matteo Vinlöf, Ricardo Wagner, Samuel Unsöld, and Benjamin Ballis.

However, Yildiz has chosen a different path. When it became clear in early 2022 that he would not sign a professional contract with Bayern Munich, the continent’s biggest clubs began courting him. For a few months, it looked like FC Barcelona would sign Yildiz but at the last moment, Juventus came around the corner with an offer that brought the 17-year-old to Turin in early July.

Yildiz’ best position is the false 9 or number 10. However, he can also play on both wings. His best role in attack is to be set up as an Advanced Playmaker. Advanced Playmakers register a high number of passes into the final third in matches they play as well as directly creating chances in possession. Players within this role tend not to perform a high number of defensive actions including recoveries in their own final third in favour of a more creative role on the ball. 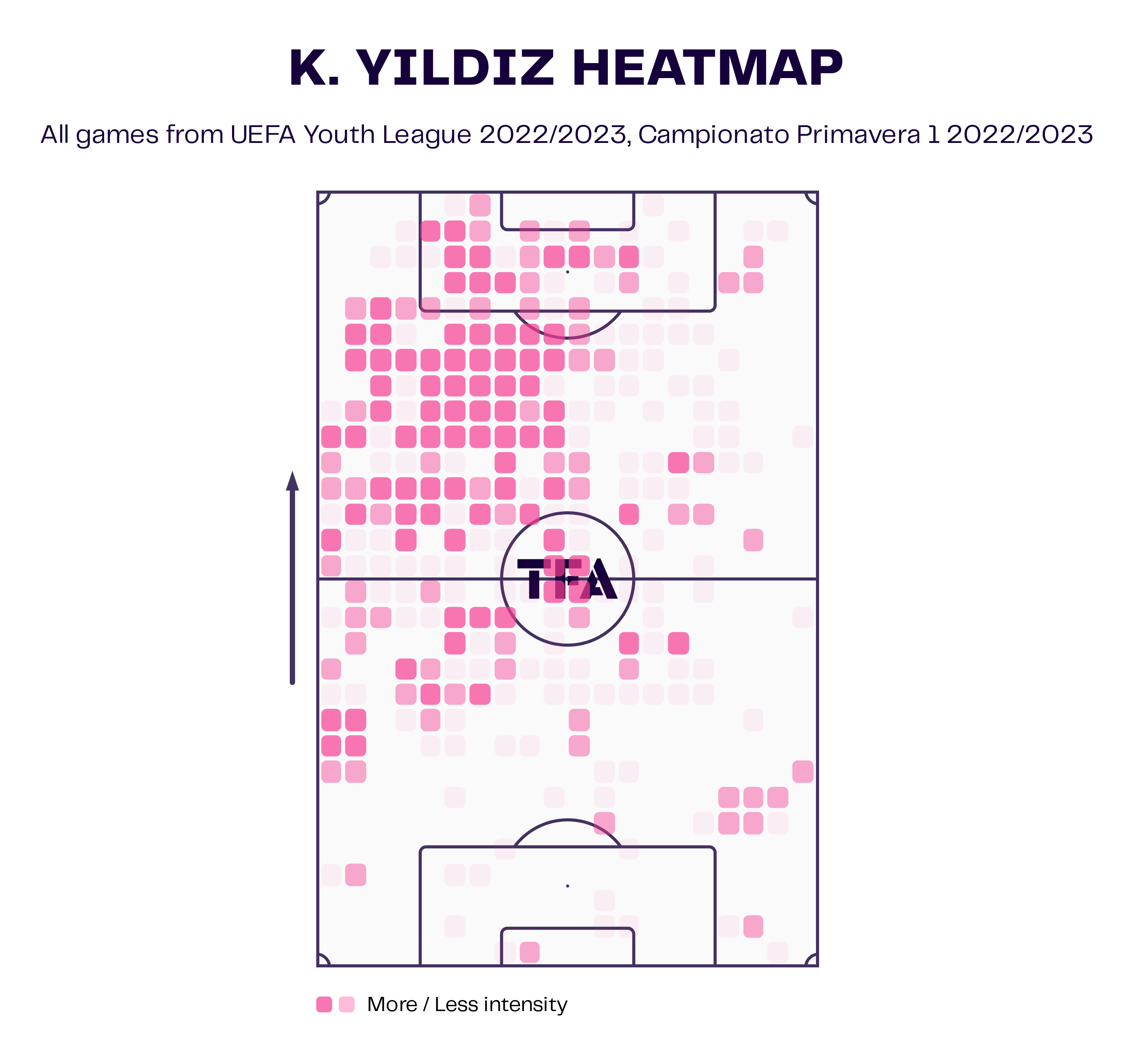 Although the 17-year-old has struggled with a number of issues – including an early growth spurt that forced him to adjust to his new physique – Yildiz has been a key figure in the ranks of Bayern youth in the 2021/22 season. He started the season at the Under-17s and was quickly promoted to the Under-19s as a 16-year-old after scoring four goals and five assists in his first eight games.

Things are even better at Juventus: After 10 games in Primavera 1, in which Yildiz started 5 times, he scored 6 goals and set up 5 more goals for his teammates. In the UEFA Youth League, he has started all 4 games so far and scored 1 goal.

As we can see in his xGoals map down below, Yildiz attempted 28 shots this season. His xGoals stat per shot is 0.13. However, out of these 28 shots, 7 resulted in goals. Therefore, he overperforms his xGoals of 3.72 by 3.28 (=7 goals). This means that he scores nearly doubled that often than he is expected to do so. 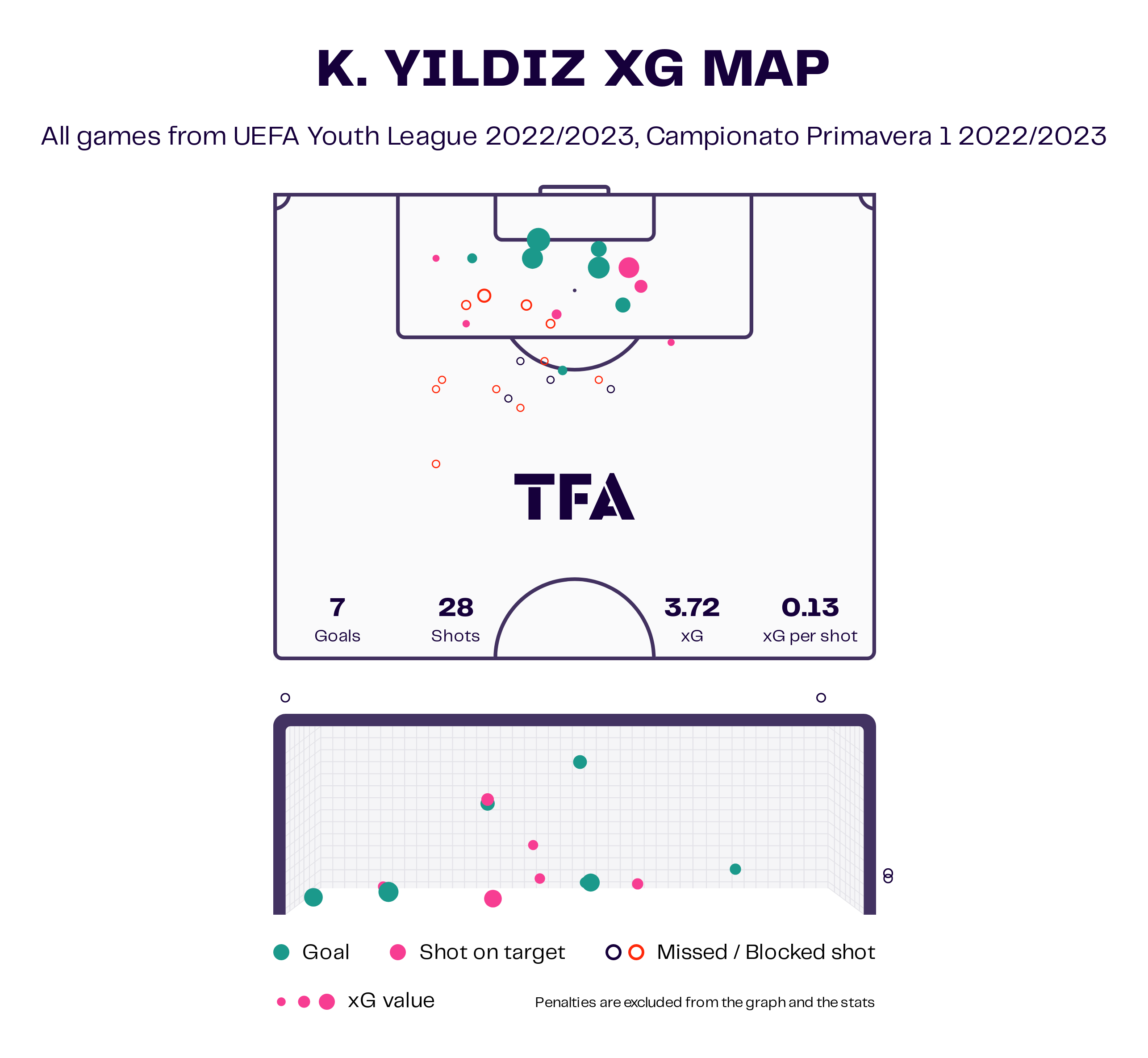 The playing style of Juventus’ latest youth signing is skilful, mobile and energetic. The young player comes with a good body mass ratio, physical strength, power, stamina, and natural fitness and feels comfortable in contact situations. One of those situations is shown down below against Cagliari U19. He receives the ball in the half-space and immediately attracts three opponents. 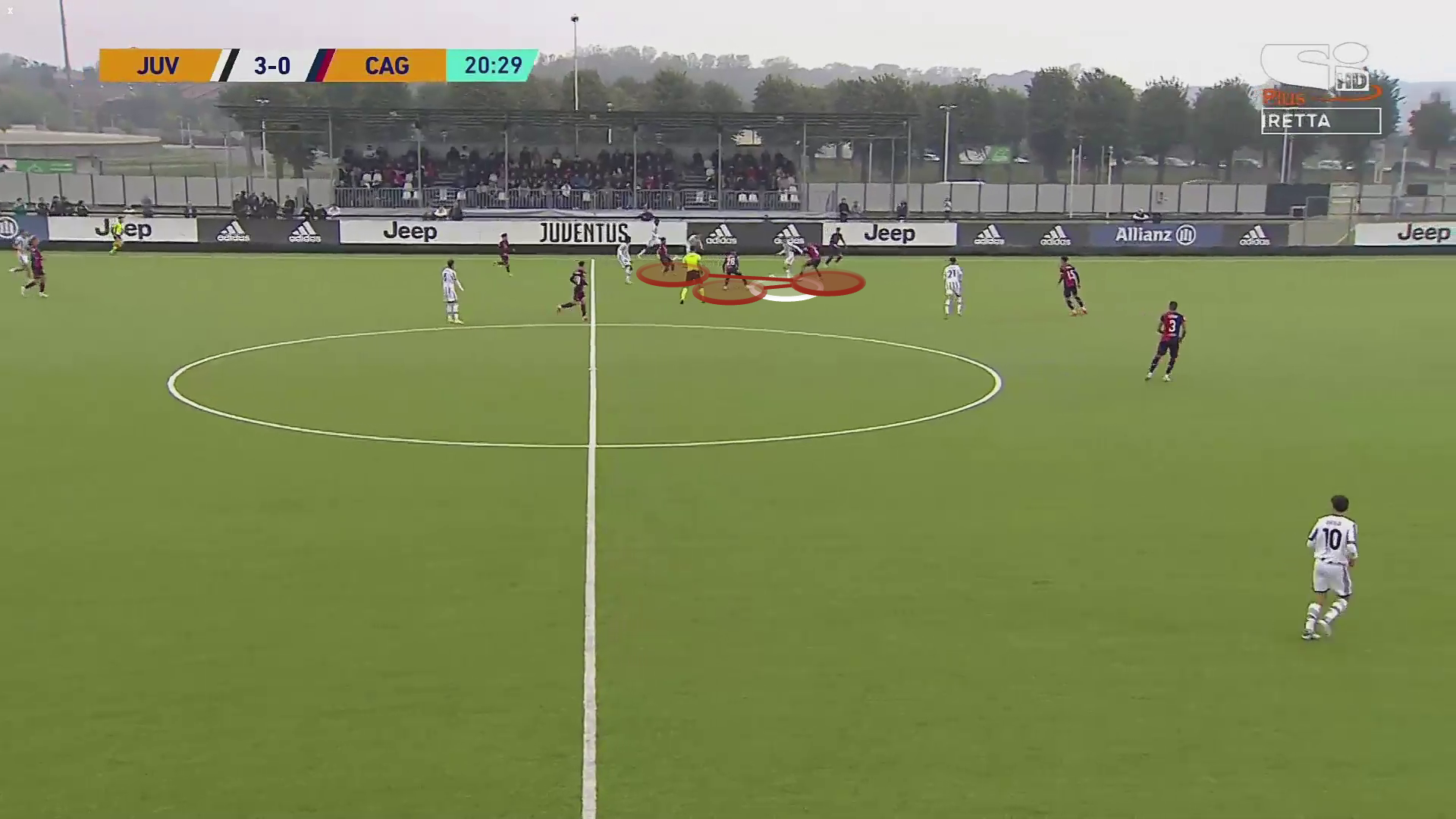 For a player of his size, he combines excellent pace, agility, footwork, and coordination. As a typical number 10 and advanced playmaker, he likes to dribble. Down below, we can see his successful dribbles and also his unsuccessful dribbles. He wins a high amount of his offensive duels. 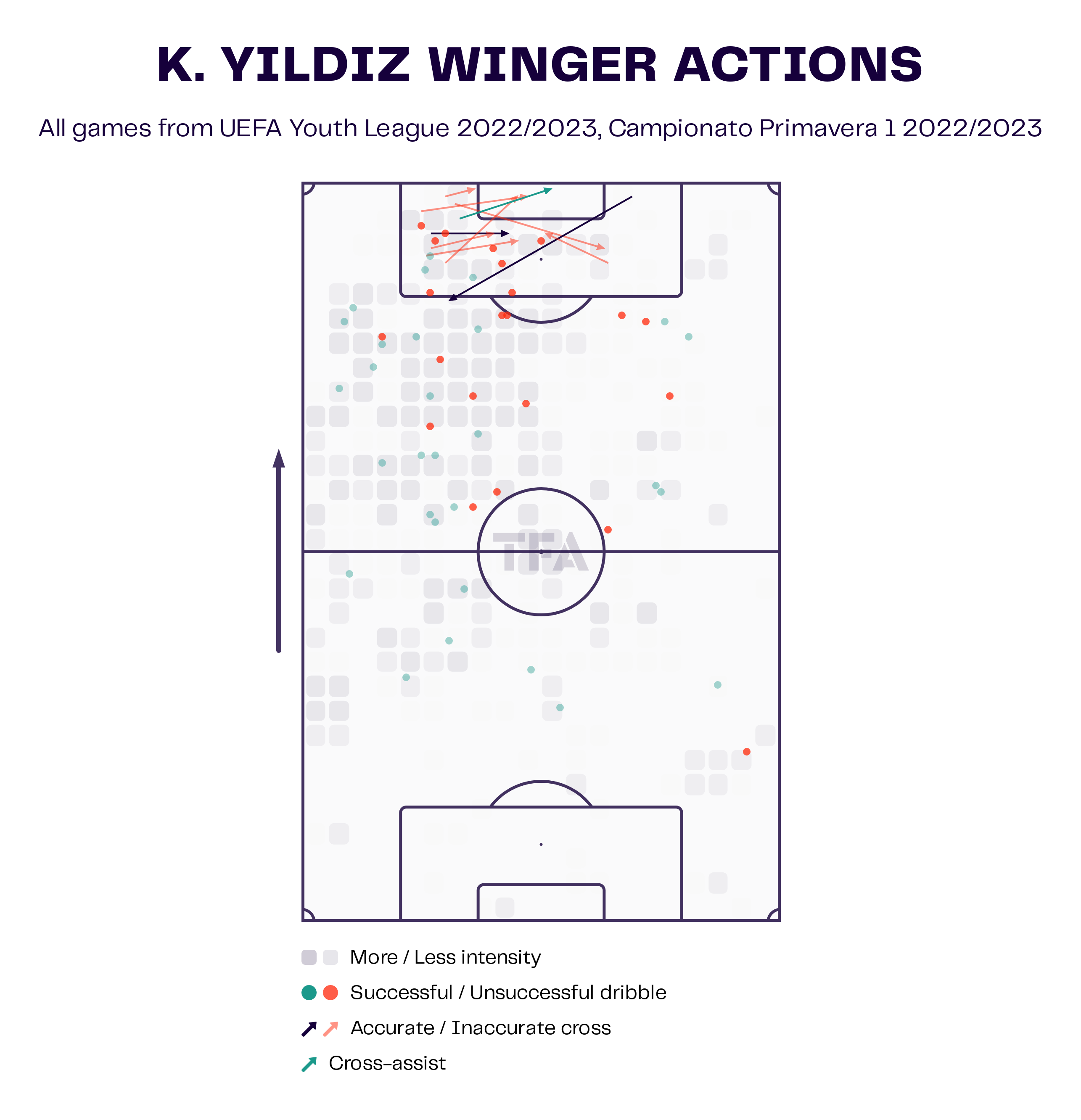 But at the same time, Yildiz has the technique, ability, and confidence to execute killer passes and set up goal-scoring opportunities for his teammates. Additionally, Yildiz is a player that always tries to find a vertical option in his game, so he is very capable of pushing his team forward to finishing positions. We can see his shot assists map down below. This shows from which positions he tries to assist his teammates. 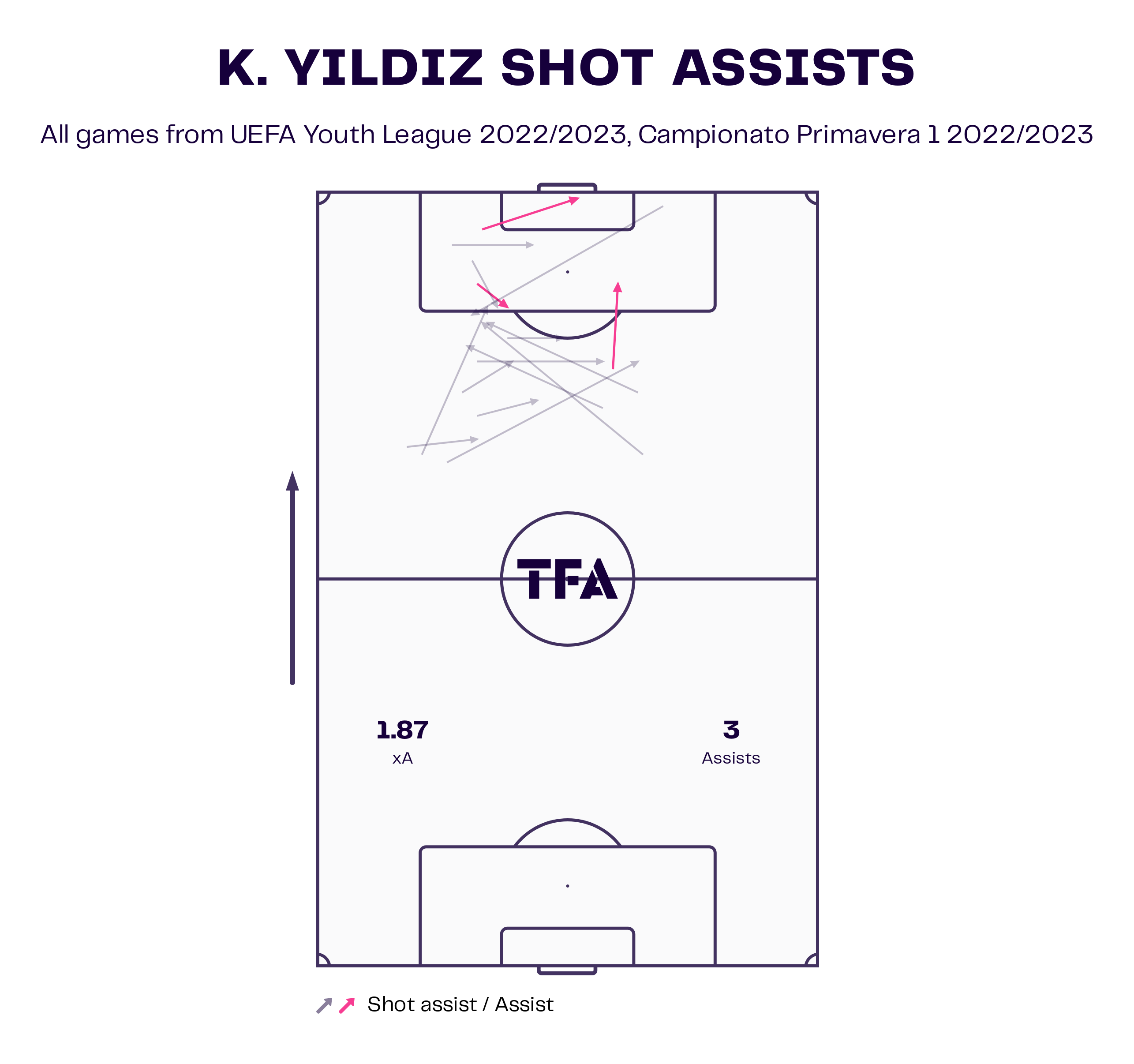 Also, he is able to deliver pinpoint passes and crosses. Above all, he also operates comfortably with his weaker left foot. This is key in several situations when he is in tight spaces and needs to find solutions. He uses his body to shield the ball and then plays a pass forward like in the situation against Benfica down below. 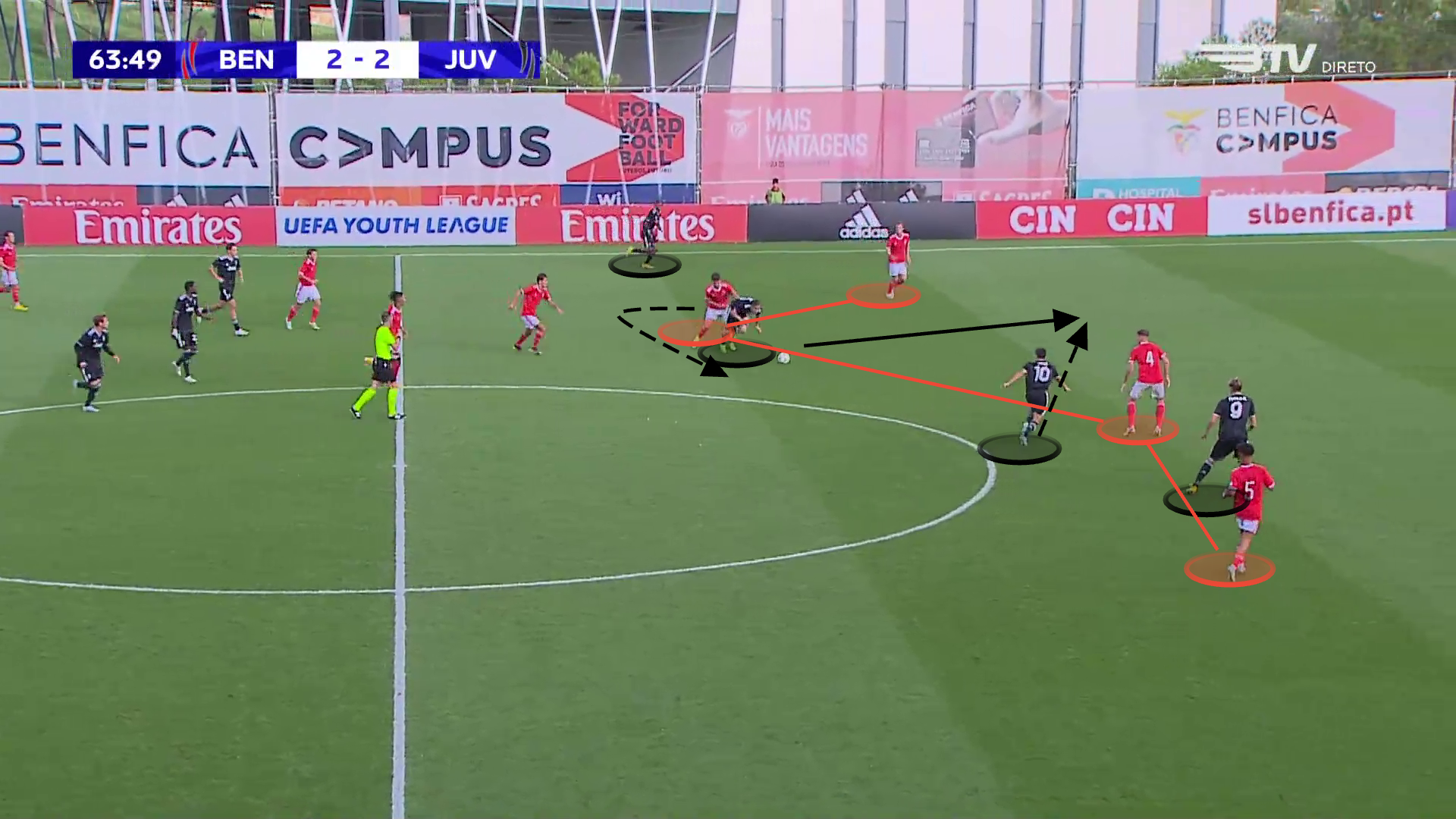 Yildiz likes to be fielded in a free role as an attacking midfielder, where he is given space to roam the pitch. The youth national team player of Turkey is very creative with his off-the-ball movements and likes to find the best space to receive the ball with good timings, linking up the team’s midfield and attack. he often drops in between the lines to receive the ball and to play a progressive pass with one touch like in the match against PSG in the following situation. 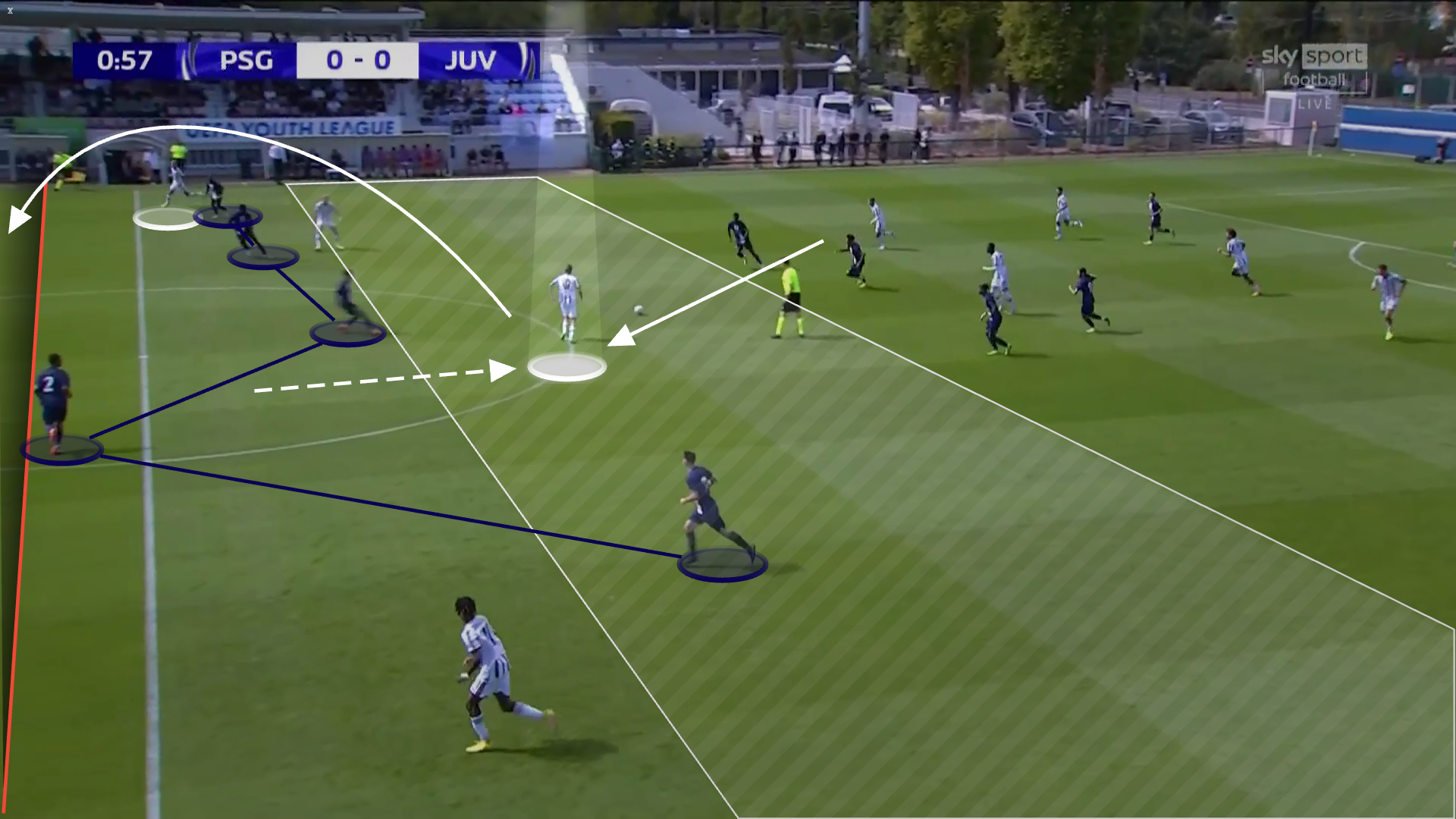 In attack as well as in offensive transitions, the former Bayern Munich player is able to produce powerful and dangerous runs upfield on the counterattack. His progressive runs can be seen on the map below. 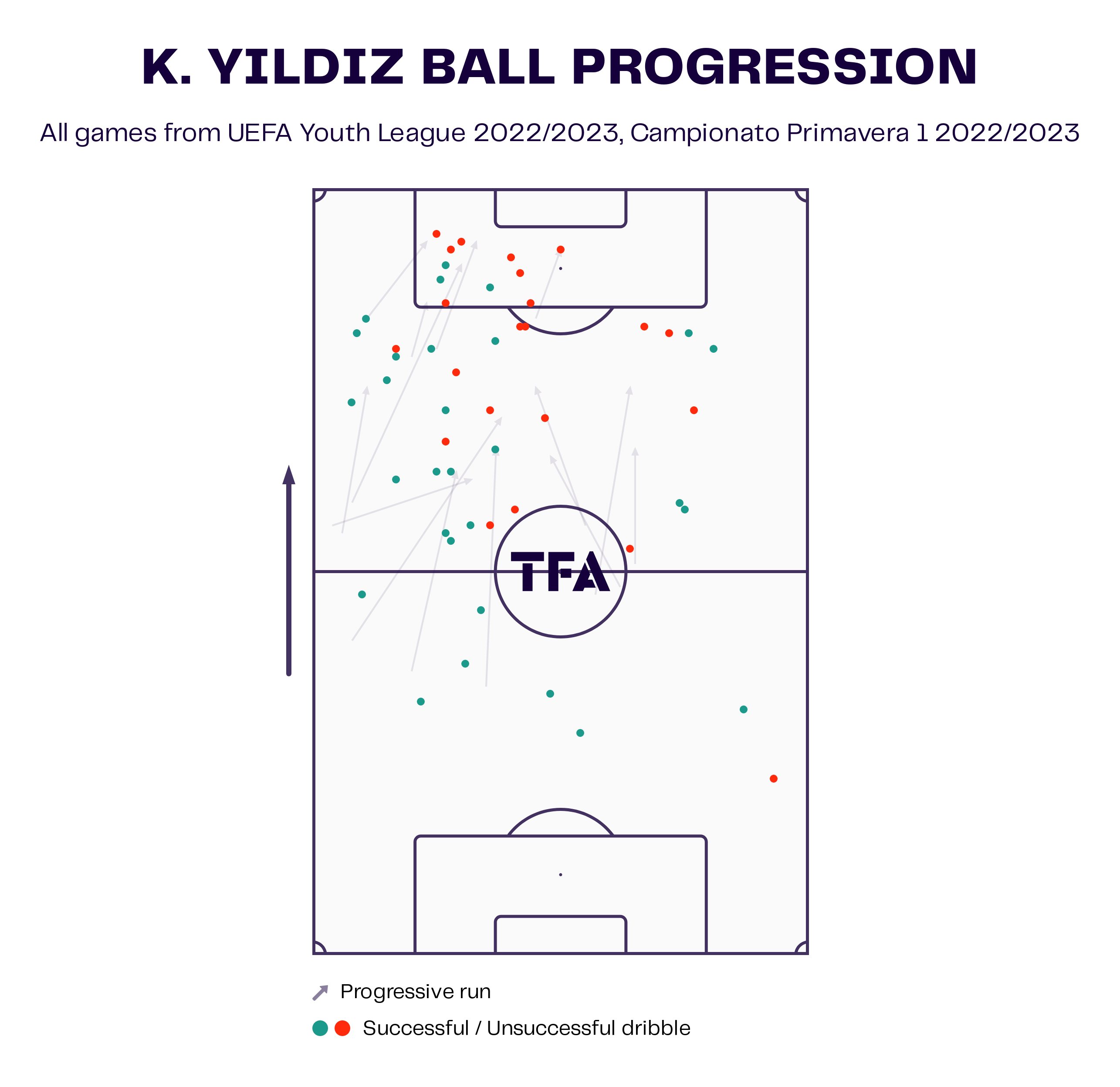 Thanks to his ability to shield the ball and his excellent close control, it is more than extremely difficult to knock him off the ball. Yildiz is a press-resistant player thanks to his good composure and retention skills under pressure. In the image down below, we see him dropping deep to receive the ball and dribble out of four opponents. So he brings the whole team time and space in attack. That is a skill required at the top level and will increasingly be important to adapt to Juventus’ first team. 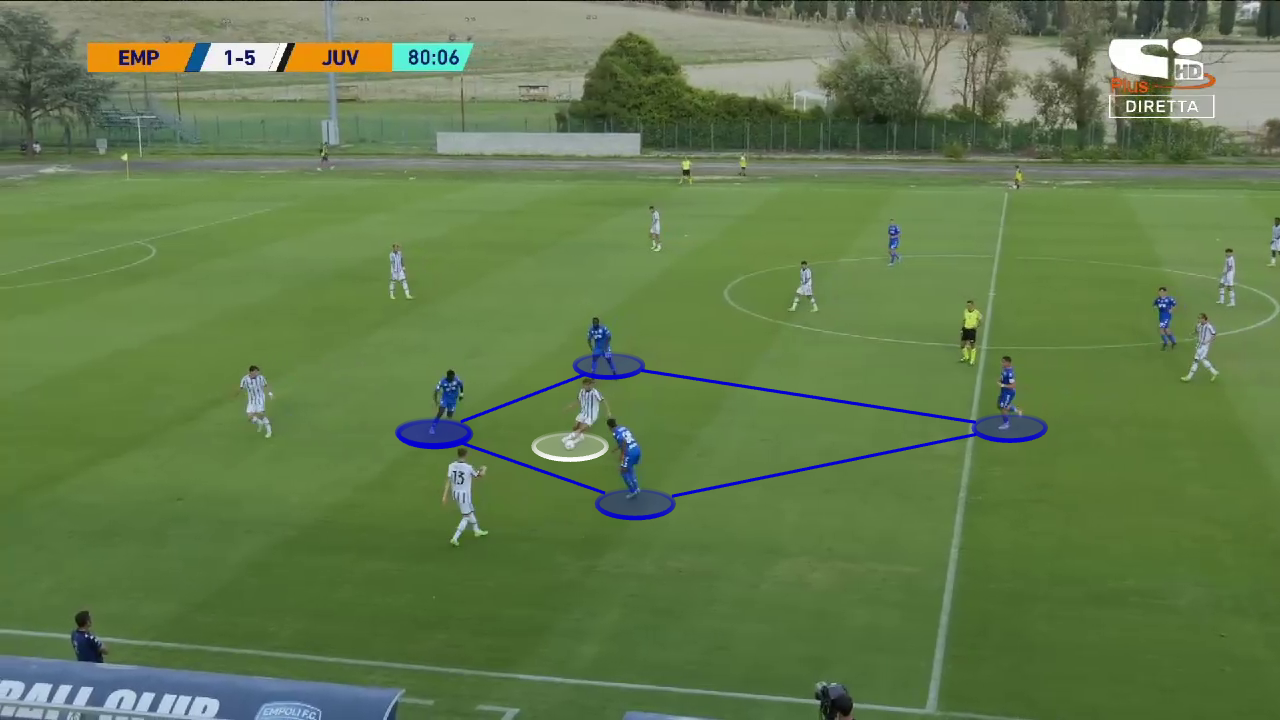 As another advantage, he is a competent set-piece taker. Therefore, he is a direct set-piece threat. If there is something to be improved, he still needs to work on his composure to become even more efficient in the final third.

As already said, Yildiz has a good body mass ratio, physical strength, power, stamina, and natural fitness. This benefits him in defence as well. In the defensive phases, Yildiz seems aggressive and tenacious. However, he can still improve his defensive work rate. As an advanced playmaker, there is nothing that Yildiz is outstanding for. Down below we can see his defensive actions map. 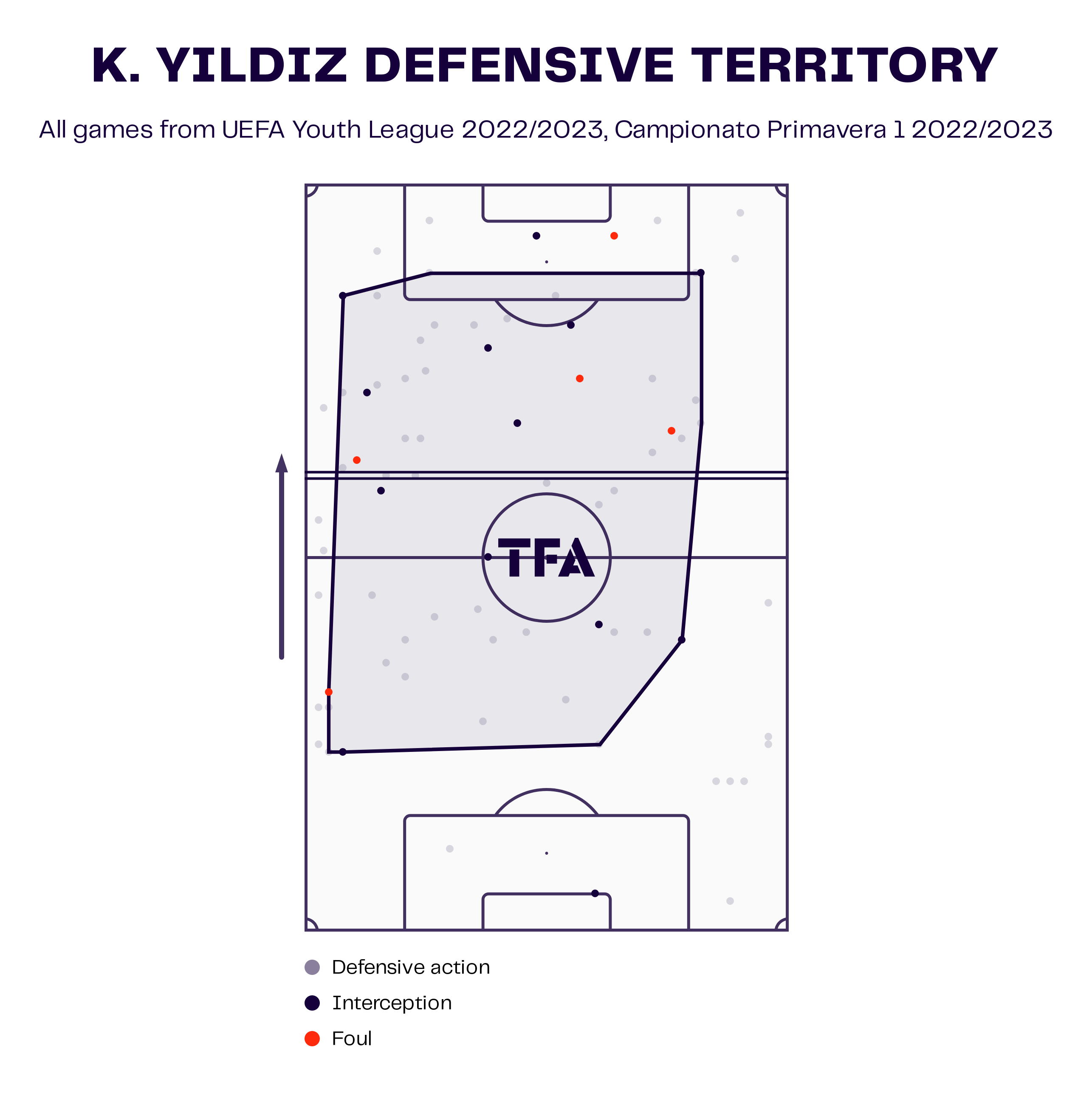 His aim now is to get promoted to the Juventus first team. Considering how long other talented players from the club’s academy have had to wait, that’s unlikely to be the case this season.

However, given the efforts made by Juventus and the clubs the Italians had to surpass to sign Yildiz, they are convinced they have landed a player who can make a difference at the highest level in the not-too-distant future. Surely Adidas believed that in 2015 too. Now, the rest of the world will soon learn why they went to so much trouble to tie Kenan Yildiz to their brand. 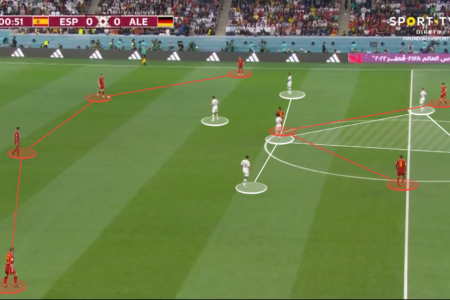 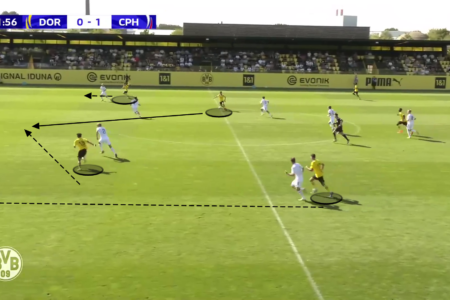